I'm on the record as celebrating this season's "back-to-the-basics" approach to Doctor Who, but now I'm getting nervous: it might be time for a little clarification about what that means.

What I mean when I say "back to the basics" is that it was long overdue for Steven Moffat's Doctor Who to take a step away from metafictional, self-referential navel gazing. This is not to say that Moffat hasn't told many good—even brilliant—stories in his seven-year tenure: of course he has. But his creative lens has most often been turned inward, towards exploring—through overly complicated arcs, and elaborate metaphors—the nature of the Doctor, and of Doctor Who itself. That approach has paid off magnificent dividends at times, but it had grown increasingly stale and strained over the last few seasons, as it felt like Moffat had said—and then repeated—just about everything he had to say about the spiritual DNA of his favorite show. Since "The Day of the Doctor"—the perfect capstone to Moffat's long explication of Doctor Who's true nature—I have longed for him to move this subject back from text to sub-text, and re-embrace the show's roots as one of the most brilliant, infinitely flexible vehicles ever assembled for simply telling good stories.

That's what "back to the basics" means to me, and it has felt—tonally—like that's what we were finally getting in Season Ten. But "back to the basics" should not mean dumb, or shallow, or simplified. At its frequent best, classic Doctor Who told big stories about big ideas: intelligent, complex, thematically rich stories about political and sociological conflicts, about human nature and ethical dilemmas. It wasn't about itself, and it wasn't often about the Doctor, but it was always about something.

Whereas, I'm sad to say, I found Mike Bartlett's "Knock Knock" to be a well-acted, well-directed, well-executed nothing of an episode: delivering nothing, saying nothing, meaning nothing. It is an empty triumph of emptiness, almost impressive in its ability to avoid anything approaching a deeper emotional or intellectual level. At best, it is—in a criticism Bartlett perhaps sought to defuse by referencing it directly in the dialogue—a forgettable episode of Scooby Who. 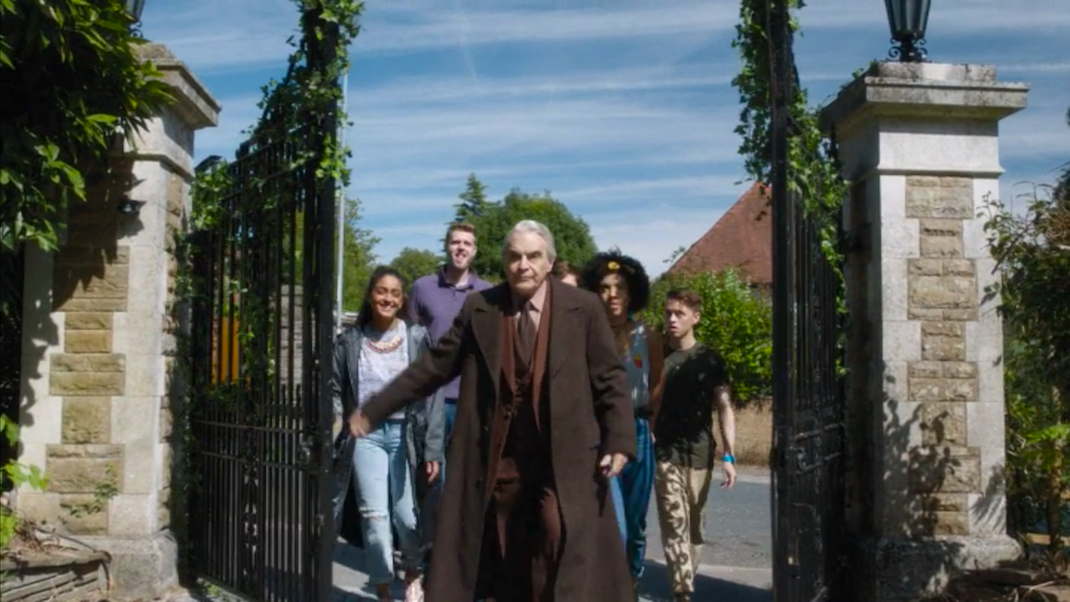 I find my quibbles with a lot of Doctor Who writers can all be boiled down to one factor: lowered expectations. (New writers are particularly prone to this, though certain veterans—*cough*GATISS*cough*—are guilty of it as well.) It's the dangerous belief that a Doctor Who script simply needs a weird monster, a few disposable characters, and some silly running around to keep the littluns entertained. You can almost hear them saying, "Well, this story isn't much, but it's good enough for Doctor Who."

Lowered expectations are deadly to Doctor Who, and lack of ambition is the greatest sin. This is a show that is powered by ambition, by the enormously thrilling conceit of being able to tell any kind of story from week to week, for any and every audience. Each episode is an almost completely blank slate, and there are virtually no constraints placed upon the author's imagination. As such, Doctor Who is a show that demands and devours new ideas at an almost alarming rate. ("I think you know you’ve got a good idea for a Doctor Who story if you think, ‘Well, I’ve just blown that feature film idea forever, haven’t I?’" Steven Moffat has said. "That's the size of story that gets you through 45 minutes of Doctor Who."1 You can do anything within this format: so why would you consciously try to do nothing?

"Knock Knock" might be a halfway decent episode of some other show, but it simply doesn't have enough ideas to power 45 minutes of Doctor Who. This is evident right from the beginning, with the story being set in motion by pure, preposterous coincidence. Bill and her friends are looking for an affordable house to share, and just happen to be approached by a mysteriously Mephistophelean landlord (David Suchet, always excellent, but wasted) with a big, spooky house to rent. 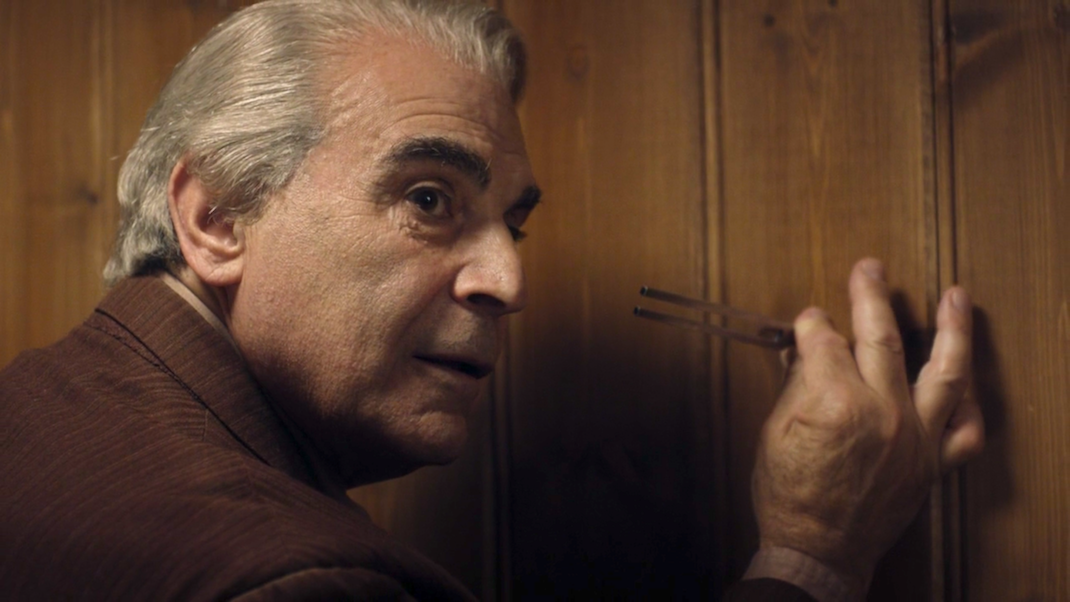 Even leaving aside the level of naïveté at which six young adults would need to collectively exist for this story to work, the set-up is a problem. In my fiction-writing courses in college, one of my professors was fond of asking the question, "Why does this story happen now?" It was a smart question, and any aspiring writer who couldn't answer it was encouraged to go back and reconsider the weak causal construction of their story. Doctor Who, of course, has a reliable, built-in answer to that question: the show has always implied—and Season Six's "The Doctor's Wife" confirmed—that the TARDIS takes the Doctor and his companions where they need to go. Unfortunately, Bartlett eschews that explanation here, and finds nothing else with which to replace it: it is entirely a coincidence that Bill happens to be pulled into a house infested with alien termites.  This would not necessarily be a deal-breaker in itself—though, off the top of my head, I can't recall such a flimsy set-up for a Doctor Who story—but it's an early sign of the paucity of ideas to come. It is—in a word that never bodes well for Doctor Who writing—lazy.

And that laziness permeates every aspect of this episode. Surrounding Bill with a group of friends is an excellent idea, for example—it is something that would distinguish her from other modern companions—and it was refreshing to see Bill anxious to carve out part of her life that is not defined by the Doctor. ("I'll see you later for more exciting TARDIS action," she tells him. "But, basically, this is the bit of my life that you're not in.") But this promising opportunity is wasted: the "friends" in question are not really friends—Bill actually knows only Shireen (Mandeep Dhillon), and we never learn how well—and the other characters barely have personality traits, let alone personalities. We learn virtually nothing about them, and we learn little about Bill through her interactions with them: they are simply indistinguishable termite fodder. (When the most memorable thing about a character is that he literally fades into the woodwork, you know you have problems.) 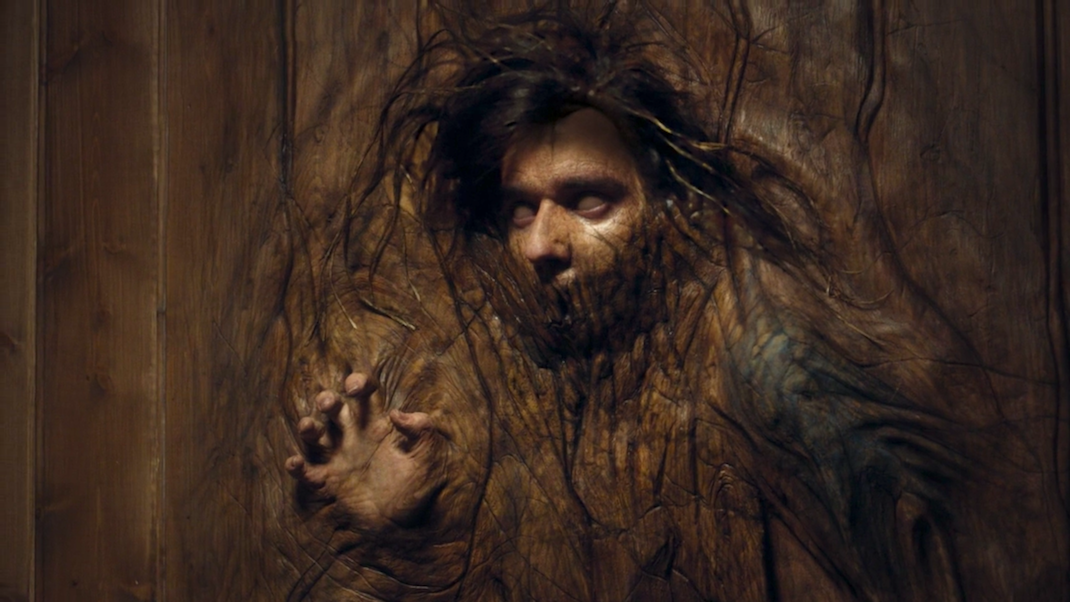 Of the plot itself, the less said, the better. The "Dryads"—let us use the Doctor's name for them, since "Space Lice" lacks a certain dignity—are a half-baked idea for a monster, at best. Their behavior makes no sense. (They save one dying girl's life by turning her into wood, but consume all the other people they encounter. Fortunately, they consume these people in a way that allows them to be magically reconstituted at the end of the episode, clothing and all, because the dying girl now has absolute control over them…or something.) The last-minute reveal that the Landlord is the girl's son, not her father, amounts to little more than a gigantic, eye-rolling So what? (Nor do I quite understand why this realization makes Eliza [Mariah Gale] suddenly have ethical qualms about murdering six people every 30 years to stay alive.) This entire dilemma seems to have been constructed piecemeal from elements designed to achieve a momentary effect, without any internal logic or greater purpose. (Why do the creatures make that knocking sound? Because it's creepy! And because the episode needed a title, I guess.)

Whenever I find myself cataloguing quibbles like this, I know that either my review or the episode has gone completely off the rails at some point. (It's usually both.) But, you see, there's simply nothing else to discuss here: "Knock Knock" just doesn't work on any level. Lacking any emotional resonance or thematic purpose, the hour at least needed to work on a basic level of entertainment, but I personally found it neither exciting nor scary, so it's a bit nowhere: it's the completely disposable "filler" episode I was expecting to show up last week.

Not every episode of Doctor Who needs to be of world-shaking importance, of course. But, for comparison's sake, an excellent "middle-of-the-road" story—no, that only sounds like a contradiction—can be found just a few seasons ago in Neil Cross's "Hide." That story is far from an all-time classic—it has its problems—but it is a scary story that actually manages to be scary, and its haunted-house plot is packed to the rafters with fascinating ideas and genuinely meaningful surprises. Best of all, it features supporting characters who actually feel like real people in whom we can emotionally invest, and it has things to say that are—if not wildly original—powerful and profound. It didn't do anything particularly groundbreaking, but it delivered on the ideas, and it delivered on the fun, and it delivered on the feelings. That's what I expect, at bare minimum, from an hour of Doctor Who. Sadly, "Knock Knock" doesn't even come close to meeting that standard.