I could tell you that I've been too busy to write a timely review of this week's Doctor Who, and I wouldn't completely be lying. But the truth is that I've also been dragging my feet on this one a bit, feeling oddly uninspired.

It's not that "Mummy on the Orient Express," from first-time Who writer Jamie Mathieson, is a throw-away episode, like "Robot of Sherwood" and "Time Heist" were (for me). There's actually a lot of stuff happening here, and on paper "Mummy" has all the elements of a great episode. We have a classic Doctor Who scenario—a monster picking off civilians in an enclosed space—that would have been right at home in the horror-flavored era of the Fourth Doctor. We have a reasonably well-done spin on the sort of Christie-style mystery evoked by the title, with lots of suspects, several red herrings, and the Doctor getting to give a variation on the detective's "I suppose you're wondering why I've gathered you all here" speech.1 And we have a fairly comprehensive tour of this season's major ideas, with some significant interactions between our two leads and some nice thematic echoes from the supporting characters.

What more could I possibly ask?

And yet all of these promising elements never quite click together in a way that would make "Mummy on the Orient Express" greater than the sum of its parts. It's a perfectly decent episode—and a promising debut from Mathieson, whose sophomore effort comes next week—but its hitting all the notes without, somehow, ever making music. Like its titular revenant, "Mummy" seems to be just going through the motions a little, compelled forward more through artificial means than any genuine spark of life.

"It's confusing: it's like two emotions at once." — The Doctor

I suspect the presence of all these potentially rewarding elements is part of the problem. I've said before that Steven Moffat probably doesn't get enough credit for his skills as a showrunner and script editor: he generally does a remarkable job of seamlessly integrating screenplays by visiting writers into his overall plans, and that can't be easy. There are occasional stand-alone episodes like "Sherwood" that contribute virtually nothing to a season's arc, but they've become the exception, not the rule: frequently, in fact, episodes from guest writers prove every bit as vital to a season's arc as those Moffat writes himself. (Last week's "Kill the Moon" is a good example of what I mean.2)

But "Mummy on the Orient Express" feels like a more awkward fit, as though Mathieson was working through a list of thematic bullet-points Moffat had given him. Soldiers, for example, have been a recurring theme all season—with the Doctor's loathing of the breed, paralleled against Danny Pink's service and emotional scars—so here (as we did in "The Caretaker" and "Into the Dalek") we get yet another dangerous, misplaced soldier (in the form of the Foretold), and another PTSD-suffering ex-military man (in the form of the train's captain, played by David Bamber).

We've also been questioning Clara's motivation for traveling with the Doctor this season, and how she has been thinking of it like an addictive thrill-ride without—as we saw last week—wanting to be the one to make the hard decisions. ("Do you love being the man making the impossible choices?" Clara asks the Doctor at the end of this episode.) Here the captain's role comments on this as well, as the Doctor accuses him of just wanting to enjoy his cushy ride and avoid dealing with the problem. ("Or here's a crazy thought: we could do something to stop it," the Doctor says, picking up on the theme of taking responsibility that I mentioned last week.) Professor Moorhouse (Christopher Villiers) picks up this theme in a slightly different key: he's basically a naive tourist—"hoping someday I might meet a real monster," he says—but when the chips are down he can't do what is necessary to help others. 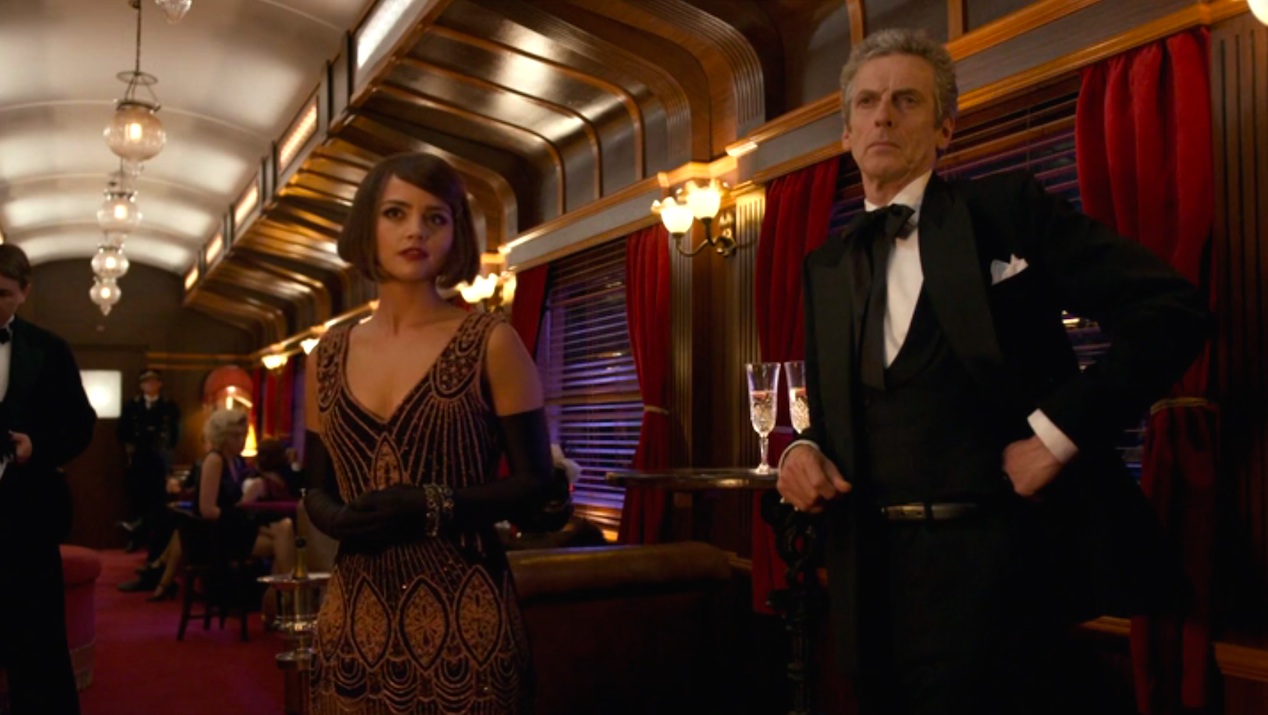 This is all potentially well and good, but it's crowded and rushed, no one theme given space to develop before another has to be checked off the list. For we also have the question of Clara's relationship to the Doctor—which, incidentally, feels like it takes a slight step backwards into romantic tension here—and how that relationship may ultimately be unhealthy. So Maisie (Daisy Beaumont) is dealing with the death of her grandmother, and feeling guilty that she rather hated this bitter old woman with whom she was forced to travel. ("Difficult people can make you feel all sorts of things," Clara commiserates, thinking of her own difficult older traveling companion and how part of her longs to be free of him.) The parallels are strengthened when the Doctor—whom Clara has accused of lying to her—lies through her to Maisie, and callously gambles with getting Maisie killed, as he has repeatedly risked Clara's life. Does the Doctor care about her anymore than he does Maisie? Is he truly heartless, or only pretending to be heartless? ("Would you like to think that about me?" the Doctor asks Clara, when she wants to give him the benefit of the doubt. "Would that make it easier?")

So there's a lot going on in this episode, and it's all well-conceived, but it's perhaps too ambitious, especially for a first-time Who writer. Any one of these themes would have provided sufficient weight to ballast this story, and any one or two supporting characters—I didn't even mention Perkins (Frank Skinner)–might have been sufficient to round out the cast. Trying to hit all of them in turn, and keep them all in play, feels a little cursory, and ultimately unsatisfying.

And all of it grates a little against the construction of the story itself, because these points are shoehorned hurriedly in between frantic mummy attacks. (The mummy scenes—though well realized technically—are themselves another reason this episode never quite feels like it has momentum: the plot doesn't build and develop so much as just keep repeating itself.) There's no real connection I can see between the plot of the episode and what it's trying to do with the characters: it's a stand-alone monster-of-the-week story with important character bits stuffed in the gaps. (I don't usually say this, but this is the rare episode that probably would have been improved by stripping out all the emotional and thematic  stuff, and just focusing on the plot. Had this been the third episode of the season—before all the Doctor/Clara drama—it might have worked much better.

Because the character stuff is crowding out the story, and vice versa, in ways that help neither. This is supposed to be an important episode for the Doctor-Clara relationship, but there's something wrong with that plan if Clara spends most of the episode locked in a luggage compartment away from the Doctor. After Clara's emotional outburst last week, it was disappointing in the first place to see her step out of the TARDIS at the beginning of this episode, and no amount of back-and-forth about a "last hurrah" can quite erase the feeling that we've skipped over some important character work for the sake of convenience. And when, at the end of this episode, Clara has decided to lie to Danny and continue traveling with the Doctor after all, it too feels too easy and unearned. "Big change of heart," the Doctor observes, and he's right: the episode would have needed to do a lot more work to make me feel like the writers aren't compromising Clara's character a little, making her flightier and more mercurial for the sake of keeping her in the TARDIS. "I've had a wobble," she says, and the fact that it's meant to sound lame and unconvincing doesn't make it any more satisfying.

We're not done with this topic, obviously: the "Companion Conundrum" is ultimately what this season is about. But, in his obsession with this theme, Moffat has written himself into a corner, yet again, as he did in Seasons Six and Seven. "The Girl Who Waited" and "The God Complex" brought both the Doctor and the Ponds to a satisfying and logical conclusion that they should part ways—and then the Ponds stuck around, for no good reason, for another eight episodes. The same thing is happening with Clara now, and framing her wobbling as the relapse of an addict is serving the needs of the show without doing justice to her character. 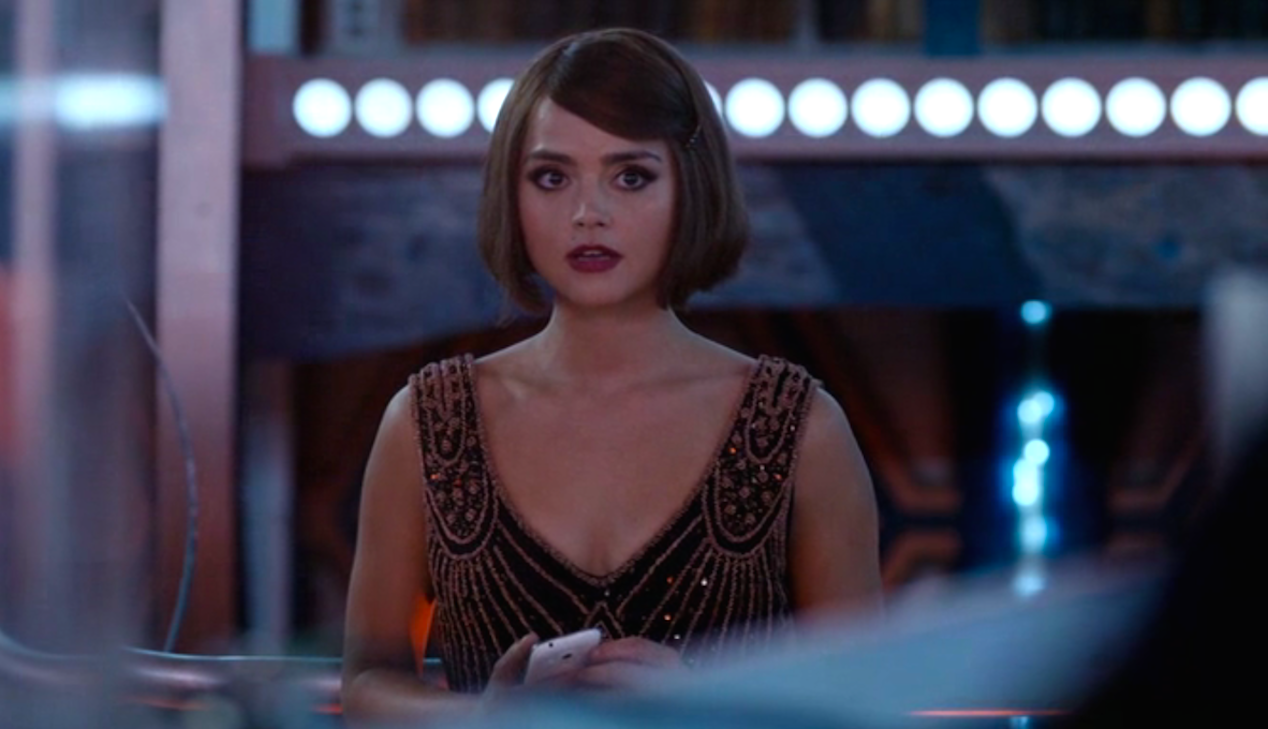 As I wrote last week, I actually like how the Twelfth Doctor's era seems to be taking life in the TARDIS more seriously, and making it less about having fun: it should, as I've said, be hard sometimes. But I'm growing increasingly concerned that Clara is being sacrificed on the altar of this idea, her character growing more shallow and less consistent with each wobble. And it ultimately comes back to something I discussed in my review of "The Caretaker": a weakness in Moffat's conception of his female characters. Clara's conundrum this season seems to have been largely triggered by the Doctor's transformation: she never questioned why she was traveling with young, charming Matt Smith, but suddenly older, grumpier Peter Capaldi is another matter.

The implication is that Clara's motives were always selfish and slightly shallow—founded in attraction and a thrill-seeking impulse—and it troubles me. It troubles me that both Clara's turning away from the Doctor last week, and her return to him this week, are both framed as weakness: an inability to handle the tough situations in the first case, and an inability to deal with her withdrawal pains in the second. And it makes me realize that Amy Pond's decision to travel with the Doctor was also presented as a weakness: first as a form of running away from adult responsibility (in Season Five), and then—as it is with Clara here—as an addiction, a thrill-seeking need, an inability to be satisfied with normal life. And it reminds me that River Song's entire raison d'être was to be with the Doctor, to the extent that she not only built her entire life to find him, but was also perfectly content to be locked away in jail until he sent for her. Is it so hard for Moffat to write a strong, independent woman who wants to go traveling through time and space for the right reasons?

After last week, I was hoping that Clara would eventually decide to return to the TARDIS because she realized that she wanted to do good: I hoped she would make a conscious decision to continue not because she was addicted, or damaged, or lovesick, but because she was a hero. But—even leaving out his dismissive reactions to the idea of casting a woman as the Doctor—I'm beginning to wonder if a female hero is something of which Moffat can even conceive. 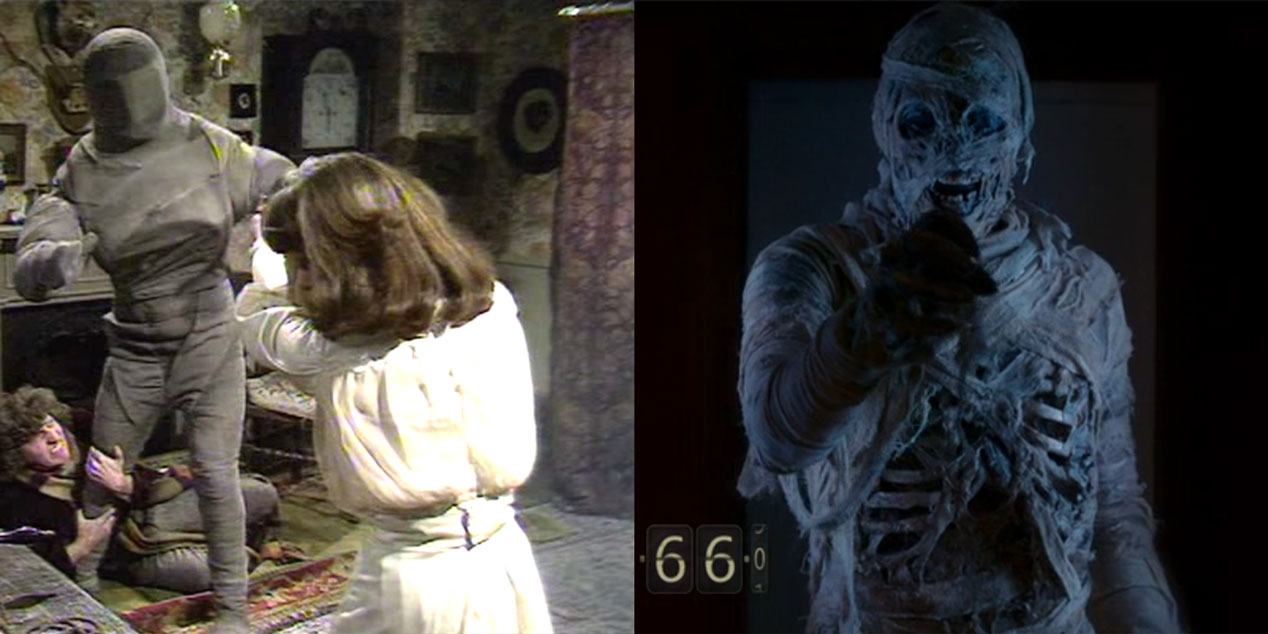