In his eulogy for film critic Roger Ebert in The New Yorker, Alex Ross mentioned how much he admired the fact that Ebert got right to the point in his reviews, and didn't waste a lot of time "clearing his throat." It was a good observation—absolutely true about the great man and his marvelously efficient reviews—but it gave me pause.

Obviously, I'm no Roger Ebert. (I knew that already, actually.) But I'm thinking about it today because I find myself, as we speak, just clearing my throat. In fact, I should warn you that this whole post may turn out to be nothing but a lot of sputtering, raspy, phlegmy throat-clearing in preparation for a song that never quite gets sung. (If you want to skip it, I don't blame you; if you want to stick around, all I can promise is that I'll try to explain why I'm floundering a bit this week.)

Oh, I have reactions to episodes as I watch them, of course, but those are emotional, experiential reactions, which come almost completely from the right side of my brain. My fiancée will testify to this: after every episode of Doctor Who—or any other show I review—she always turns to me and says "Well?" And I usually say something profound like "Eh," or "It was okay." At best, I may say, "I think I liked it." At worst, I'll offer some erudite and perspicacious critique like "That sucked rancid donkey balls." But, if she presses me to elaborate on these opinions, I can't do it: not because I'm being coy—I'm not—or because I don't like to hear myself talk—I do—but because I honestly don't know what I think about something until I write about it.

For me, these reviews are a process, not a product—and they're a messy process at that. I don't start with answers, or even with theories, but with questions. Writing is a way to unpack not just the episodes but also my own reactions to them: to grapple with the things that intrigue me, that obsess me, that confuse me about a story. With last week's "Listen," for example, I didn't set out to write a positive review: in fact, I wasn't sure I liked the episode at all. I wasn't sure I understood the episode at all, but it was interesting, and different, and provocative for reasons I couldn't really articulate. So I started with what seemed to me the most interesting question—What does it mean to be afraid of something that isn't there?—and I chased this, and a bunch of other half-formed thoughts and slippery hunches, through my own tortured prose until some interesting things started to come into focus.

(With the previous week's episode, "Robot of Sherwood," all I really knew going into it was that the episode annoyed the crap out of me. And, as I wrote at the time, all I really felt like doing, when I sat down to write, was to vent that annoyance, without analysis. It was only the confusion of seeing positive reactions on Twitter that persuaded me to really explore, on paper, why it annoyed me so.)

My point is, it's not logic that drives a review, but curiosity: wanting to figure out what's going on in an episode, and wanting to understand my own reaction to it. 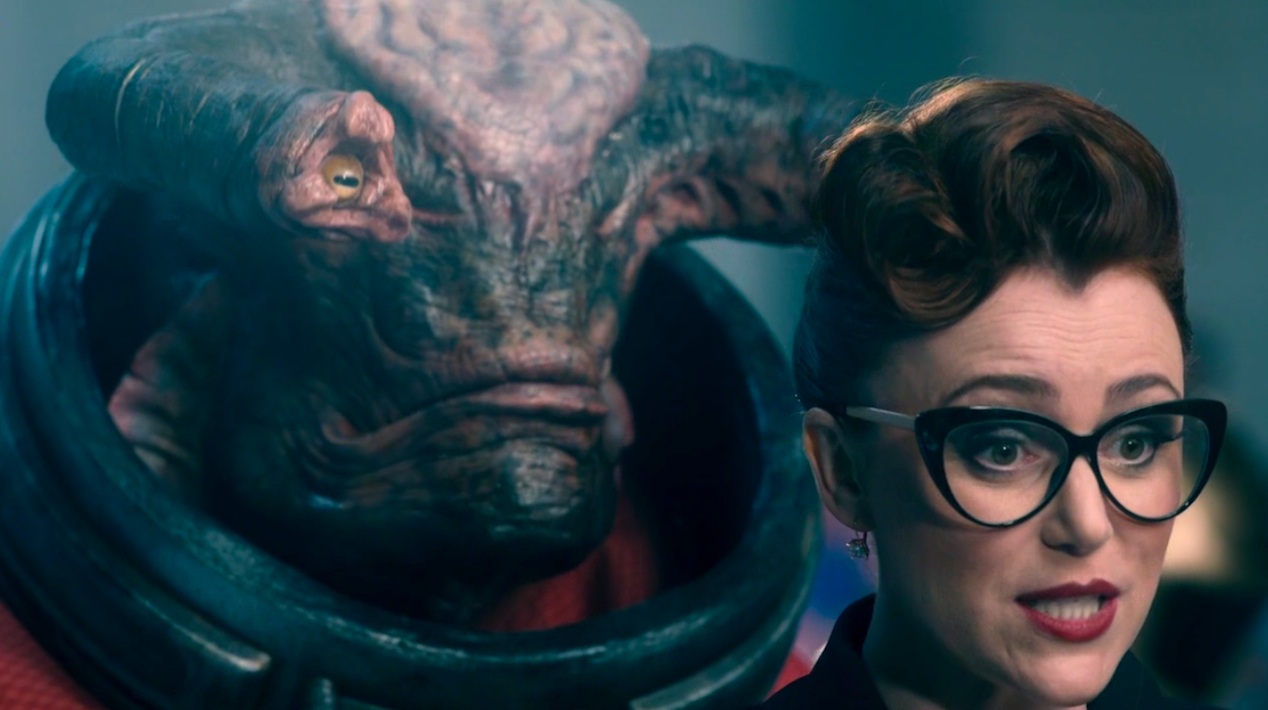 And the reason I'm blathering about all of this now is this: I had absolutely no reaction to "Time Heist." I had no emotional response one way or the other, and there is absolutely nothing about it that obsesses me, or intrigues me, or confuses me, or compels me to write about it. I didn't love it. I didn't hate it. It's just there, a thing that exists, harmless and colorless and ultimately meaningless. I have no idea where to begin with it. I have nothing in particular to say about it. If I hadn't committed to reviewing each episode of Doctor Who, I doubt I would ever give it a second thought.

All of that sounds, I realize, like I should be writing a bad review. And I could certainly do that. Steve Thompson, who wrote this episode with an assist from Steven Moffat, provides plenty of tempting meat for the bloodthirsty critic. Though much better than his first misfired effort, "The Curse of the Black Spot," and more fun than his muddled last episode, "Journey to the Center of the TARDIS," "Time Heist" is deeply silly, and its story does not really make a bit of sense. The plot is the kind of wibbly-wobbly, timey-wimey tangle that wants us to think it's clever for circling back on itself and sticking its head up its own ass. These are extremely difficult to pull off: Moffat himself screws them up from time to time, and Thompson is no Moffat. "Keep your mind blank!" the Doctor keeps saying throughout this episode, and it feels like the writer speaking to the audience: For god's sake, don't think about any of this too much.

So I could sit here and complain, and pick nits, and poke holes. (Even forgetting the time-travel element, and the amnesia element, the premise, as executed, is preposterous: this has to be the least secure bank in the galaxy, with no guards, no cameras, no alarms on the roomy maintenance hatches that conveniently lead into every vault. One psychically vampiric bovine doth not an impregnable security system maketh.)

But here's the thing: I really have to be motivated to be that big of an asshole in my reviews. (I don't enjoy doing it, and it's kind of exhausting, and it always leaves me feeling like an overly fussy and pedantic spoilsport.) And "Time Heist" just didn't offend me enough to bother: yes, it was nonsense, but it was mostly harmless nonsense, and kind of fun. The Oceans 11 construction and aesthetics were a little obvious, and ultimately fairly shallow, but so what? Overall, the episode was a nice change of pace: it was brisk, and it was kind of old school—lots of running through corridors—and it passed the hour pleasantly enough. 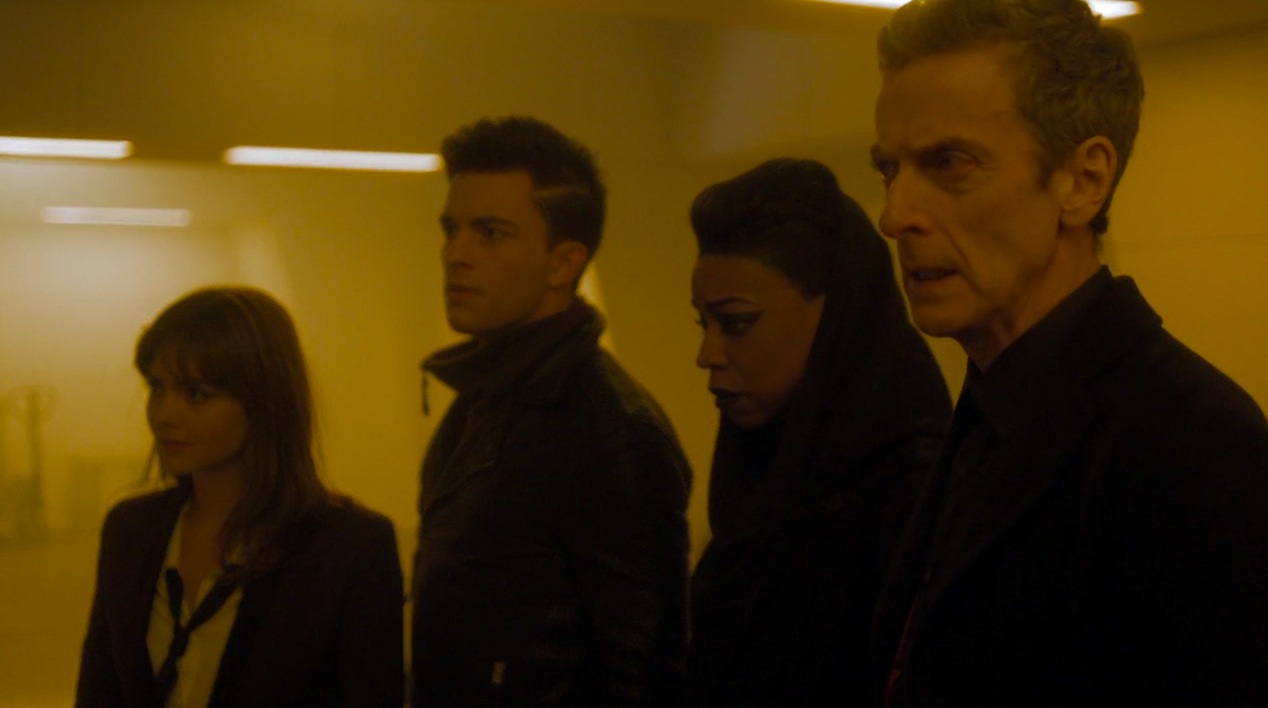 Most importantly, the things that were wrong with it were really only about the plot. If you're wondering why I'm willing to savage "Robot of Sherwood" while giving "Time Heist" a pass, it's probably because writing characters badly, and dealing with themes badly, bothers me far more than sloppy plot construction. None of the characterization in "Time Heist" was particularly deep, but neither was it particularly offensive: Psi (Jonathan Bailey) and Saibra (Pippa Bennett-Warner) were decent characters, not terribly complex, perhaps, but designed with some genuine effort towards making them rounded characters about whom we could care. Clara, after taking center stage several weeks this season, played a much more traditional companion's role here, but she was perfectly fine, and the investment in her development elsewhere in the season makes her seem like a real person even when she's just, as she is here, along for the ride. And, though Capaldi still isn't quite the Doctor for me, the mostly generic nature of Thompson's screenplay—which, with a little tweaking, could have fit any Doctor, and any companion—actually makes this his most "Doctorish" performance to date.

So why aren't I inspired to write a good review? Well, apart from the nonsensical plot, there's really just no there there: the episode isn't about anything but itself. No one learns anything, or reveals anything, or says anything of importance; it's just a caper, with no theme or meaning or resonance. (For a while I thought we were leading to some interesting stuff about guilt—since that was the purview of "The Teller"—but even his scan of the Doctor offered nothing of worth; it seemed like a wasted opportunity, since the emotional life of this post-Time-War Doctor should be a rich and fruitful subject.) "Time Heist" just isn't that kind of episode: it's all surface, no substance, delivering nothing more or less than what was promised in the title.

I said a long time ago—in a review of a truly great episode of Doctor Who—that my tentative definition of "art" is anything created by humans that means more than it appears to mean. I write about Doctor Who for those surprisingly frequent episodes when it does become art, when stories that appear from the outside to be simple, silly sci-fi adventures reveal themselves to be—to borrow a phrase—bigger on the inside.

Sometimes, however, what you see is what you get, with no surprises, no hidden depth, no treasures to unpack. Those are the times the show becomes not art, but mere entertainment. There's nothing wrong with entertainment, of course, but it's just not that interesting to write about.