Last year, Doctor Who executive producer Steven Moffat famously (and controversially) quit Twitter, amidst much speculation that he had tired of the steady stream of abuse from his alleged fans. This year, we get an episode dedicated to the proposition that the internet is going to suck up our souls, one in which the villains are ultimately brought down because they foolishly expose themselves on social media sites.

I don't blame Moffat a bit for escaping the online pecking party, but I'm afraid his antipathy towards the internet feels like a fairly thin metaphor on which to hang a story. We get it: the internet is the enemy. What's next? Are animated GIFs really miniature time loops? Does a Pinterest page of an angel become an angel? Shall we brace for the Attack of the Cybermemes?

Sigh. As you can guess, I was not a huge fan of "The Bells of Saint John." Like most of you, I've been looking forward to the return of Doctor Who, and so it is disappointing to begin my reviews of Season 7B with so little enthusiasm, but I found this episode to be something of an underwhelming mess. I don't really object to Moffat's attempt to manufacture threats out of contemporary phenomena—though I do fear these references have a very limited cultural shelf-life. (Previous show-runner Russell T. Davies was similarly obsessed with evil Bluetooth headsets, and now—just a few years later—their presence in those episodes seems as dated and jarring as Ace's boom box.) I do, however, object to such an uninspired and half-developed menace in an episode that's otherwise as creatively derivative, poorly structured, and emotionally vacant as this one."The Bells of Saint John" feels like a rehash of several other new Who episodes that I didn't particularly love the first time around: it's "Partners in Crime" without the wit, "The Idiot's Lantern" without the atmosphere, "The Power of Three" without the character work.

The episode opens with a video testimony from a young man (Manpreet Bachu) who summarizes the threat: evil forces lurking in the wi-fi. Click on the wrong set of symbols in your network list, and 24 hours later you'll die, your soul sucked up into the cloud. Again, it feels derivative: it's a little bit Ringu, it's a little bit The Net, and it's a little bit like a collection of Moffat's own greatest hits, from "Blink" (the video warning) to "Silence in the Library" (the souls trapped in the data-stream).

What it isn't, unfortunately, is terribly engaging: somehow, this threat never really feels very threatening, and our emotional investment is never quite earned. The new monsters "the spoonheads" don't quite work for me, either aesthetically or logically. (I'm sorry, what do they do, exactly?) Celia Imrie's performance as Miss Kizlet is fine, but the necessity of keeping the identity of the true villain a secret means that everything about this evil scheme remains oddly insubstantial and inconsequential for most of the episode. (Someone is collecting people through the wireless, for some reason.  Sometimes this kills them, and sometimes it doesn't. It's totally irreversible, except sometimes it isn't.) The fact that the unnamed young man from the pre-credits sequence is never seen again is typical of the strangely weightless stakes of this entire storyline: we never really come to terms with either the villains or the victims. As a result, this set-up never quite coheres enough to be intriguing, and the way it plays out never quite coalesces into drama. It never really makes sense, and, worst of all, it never seems to mean much of anything. 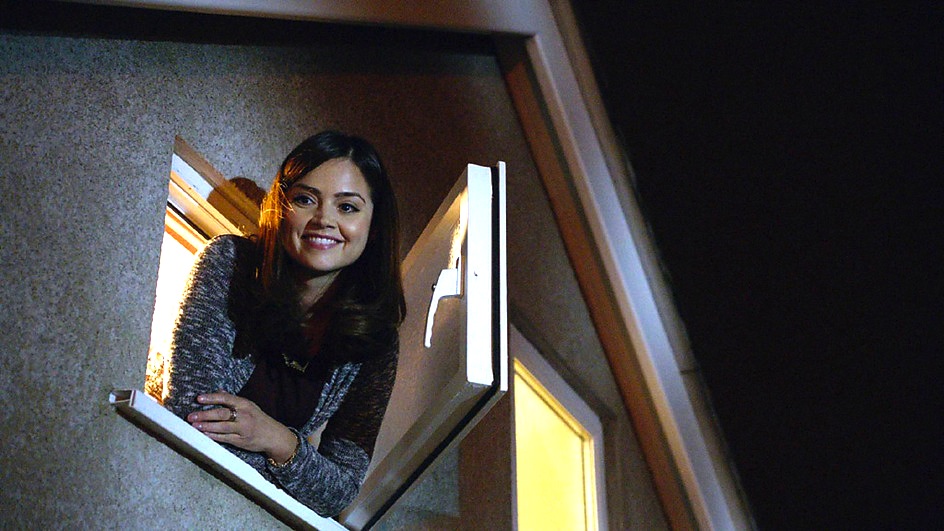 And, normally, I wouldn't mind so much. I can forgive just about any nonsensical plot if it give us room for decent character work, but that never quite happens here either. In only their third episode together, Matt Smith and Jenna-Louise Coleman already have a charming rapport, but that's exactly the problem: this is the third time we've seen the Doctor and some incarnation of Coleman's character "meet cute," and at this point it's delivering diminishing returns. We've already seen Clara's first visit to the TARDIS; we've already heard the Doctor invite her to travel with him; we've already witnessed their fumbling, adorable establishment of mutual trust, admiration, and amusement. The first time these things happened there was wonder and excitement involved, but now we're just returning to the same ground with much less enthusiasm. ("Yes, it's bigger on the inside," the Doctor says to Clara, dismissively, as they rush into the TARDIS. "No, I don't have time to talk about it.") Like Bill Murray's date with Andie McDowell in Groundhog Day, each repetition of the same events feels more and more forced and charmless.

What's worse, Moffat has had three shots at establishing a foundation for Clara's character, and yet I still don't know who she is. I don't mean who she literally is, because that's obviously the big mystery of the season, and I don't mind waiting for that revelation. But by now we should have some feel for who she is emotionally, and why we should care about her, and I'm not sure we do: as a character, she still feels terribly thin and undefined. (Think how strong and genuine a character Rose was in her first episode, even before she met the Doctor; think how sad and complex and resonant a character Amy Pond was just 10 minutes into "The Eleventh Hour.") Thanks to Coleman's performance, I already like Clara, but Moffat is going to have to stop screwing around and actually deepen her character if he wants me to love her.

None of which is to say that there aren't some nice moments scattered throughout "The Bells of Saint John." I can do without the Doctor driving a motorcycle up the side of a building, but I very much enjoyed the Doctor escaping the path of a crashing airplane by materializing onto the crashing airplane. (How very him.) I appreciated the moments when Moffat actually slowed down long enough to let the characters breathe—as in the scene outside Clara's house—and it's a nice twist on the usual formula to find the Doctor relentlessly stalking his potential companion, instead of the other way around. ("Does this work?" Clara asks him, when he offers her all of time and space. "Is this actually what you do? Do you just crook your finger and people just jump in your snog box and fly away?")

So it was not a total failure, and perhaps—given the corner Moffat had written himself into by killing her twice already—this lackluster third introduction of Clara was a necessary evil. Let us hope, however, that we are done with introductions and preliminaries, and can now proceed to find out what this new Doctor/companion era can really be.