Due to some unavoidable travel this week, I'm running behind on my posts, and so I'm going to keep my review of "The Power of Three" short and sweet.

I didn't care for it.

It wasn't terrible, mind you: it just wasn't much of anything. But at this point in the season—with only one episode left before the hiatus, and only one more week before the Parting of the Ponds—an entry like "The Power of Three" represents a wasted opportunity on an epic scale. On paper, it's a good idea for a story, one that offers a fairly fresh sci-fi concept and the possibility of some interesting interpersonal dynamics between our leads. However, in the hands of journeyman writer Chris Chibnall, "The Power of Three" never really fulfills its considerable promise. I kept waiting for it to actually mean something, or say something, or deliver something, and it just never did.

The premise was one with much potential: the year of "the slow invasion." (And isn't "The Slow Invasion" a much better title for the story?) Billions of tiny, mysterious cubes appear overnight, all over the Earth, and the world sits around waiting to find out where they come from and what they might do. For the Doctor (Matt Smith), it means a long year of patience and inactivity—two things at which he does not excel—while bunking down with Amy (Karen Gillan) and Rory (Arthur Darvill). 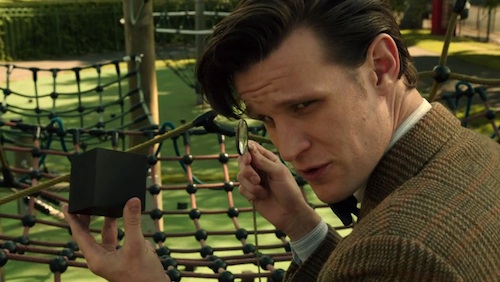 I won't complain too much about the plot of "The Power of Three," although—not unusually for Doctor Who— it squanders a long, intriguing build-up with a non-sensical explanation and a blink-and-you-miss-it resolution. (It took a year of observing humans and testing every conceivable response for the Shakri to learn that you can kill humans by stopping their hearts? And the deus-ex-sonic-screwdriver solution is unforgivably lazy writing.)

But that's fine: the plot is rarely the point of Doctor Who, and it's not the point here. "We have two lives," Rory says early in the episode. "Real life, and Doctor life." The Ponds will, they know, soon have to choose, and the story of "The Power of Three" exists only to force those two lives into awkward proximity. Unfortunately, the Doctor being forced into domesticity is a concept that Gareth Roberts has already explored in "The Lodger" and "Closing Time," and it is a real problem that the Doctor's interactions with Craig (James Corden) in those episodes were both more entertaining and more emotionally poignant than anything that happens here. There we had a real friendship developing, some genuinely comedic situational comedy, and a Doctor who relished the opportunity to live as a human for a while; here we get a few disparaging comments about how Amy and Rory live—“The universe is waiting, and you have a little job”—and a silly montage of a restless Doctor fence-painting and soccer-playing. (I did, I confess, enjoy the shot of all three leads sitting around on the couch, happily eating fish-fingers and custard.)

Chibnall does not quite manage to find the true gold in this situation, nor does he seem to have a sufficiently deep or nuanced grasp of the characters to get at anything significant through it.  These three people have been travelling together for two-and-a-half seasons of our time, and 10 years of theirs, but this episode does not really show—let alone make use of—the incredibly complex relationship they have developed. The observations here are shallow and easy, and the exchanges between Amy, Rory, and the Doctor are mawkish and sentimental. Nothing particularly interesting is said, and nothing new is learned.

And that's been the problem this entire season, and it is executive producer Steven Moffat's fault: we've gone backwards. All of last season was spent exploring this relationship, with its deep connections and deep resentments, in ways that were sophisticated and complicated and rewarding. Amy and Rory paid a high price for travelling with the Doctor—the effective loss of their child—and the Doctor gradually grew unable to ignore the fact that his presence in their lives was becoming dangerous and emotionally harmful. This all climaxed in the wonderful one-two punch of "The Girl Who Waited" and "The God Complex," and at the end of the latter the Doctor decided to leave the Ponds behind for their own good. Which is to say, the characters—and we–have already dealt with this conflict, and it was done in a much more mature and meaningful way than it is being presented here. 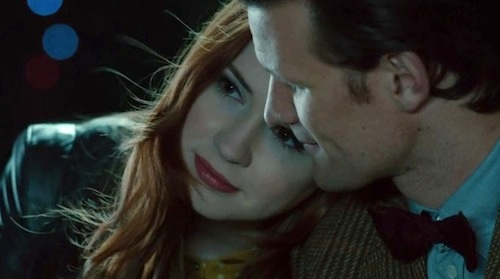 One of the beauties of Doctor Who is that it periodically refreshes itself with new Doctors and new companions, and we are, thankfully, fast approaching one of those much-needed breaths of fresh air, in the form of Jenna-Louise Coleman. This short half-season has had its high points and its low, but even the high points have felt like something of an afterthought after the emotional journey our heroes travelled in Season Six. I genuinely love Amy and Rory, but last season spent a great deal of sophisticated effort proving that the Doctor had overstayed his welcome in their lives, and as a result they have now overstayed their welcome with the show. At the end of "The Power of Three," Chibnall made a ham-fisted, unearned reference to the episode's own title as an homage to this era's trio of travellers, but all this story does is demonstrate that this era should have already come—logically and gracefully—to an end.

I shall miss Amy and Rory, Gillan and Darvill. I am now looking forward, with mild impatience, to the opportunity to miss them.

"I’m not running away. But this is one corner of one country, in one continent, on one planet that’s a corner of a galaxy that’s a corner of a universe that is forever growing and shrinking and creating and destroying, and never remaining the same for a single millisecond. And there is so much, so much to see, Amy. Because it goes so fast. I’m not running away from things, I am running to them. Before they flare and fade forever. And it’s all right. Our lives won’t run the same. They can’t. One day, soon, maybe, you’ll stop. I’ve known for a while. I’m running to you and Rory before you fade from me."