Welcome back to our continuing coverage of Doctor Who. I'll be reviewing every episode of Series 7, the first five of which will air Saturday evenings at 9/8c throughout September on BBC America. (My goal is to post each review within 24 hours of airing.) As with all my TV reviews, I assume you've already watched this episode and the ones before it, so spoilerphobes beware: discussion of anything that has aired to date is fair game.

In the words of Amy Pond, "Is is bad that I've really missed this?"

After a longer than usual hiatus—it's been eight months since the Christmas special, and just shy of a year since the end of Series 6—Doctor Who returns with "Asylum of the Daleks," written by executive producer/evil genius Steven Moffat, and directed by Nick Hurran (who helmed two of last season's best episodes, "The Girl Who Waited" and "The God Complex”). Without bothering to ease us gently back in—let alone deigning to slow down and explain things for newer viewers—Series 7 hits the ground running hard with an impressively scaled, impeccably paced story that cleverly marries the near future of this show to its distant and recent past.

Moffat has proven that, under his reign, it is worth paying particularly close attention to each season premiere of Doctor Who, as they are likely to seed the structure and themes of the entire season. His first opener, "The Eleventh Hour," contained both the beginning and end points of the 2010 series, as the finale found the Doctor looping back through his own timestream to arrive once again back where he and Amelia Pond began. Similarly, last season's "The Impossible Astronaut" launched its adventure with the Doctor's death on a lakeside beach in Utah: we then spent the entire series working our way back to that inevitable confrontation, finally coming full-circle in "The Wedding of River Song." 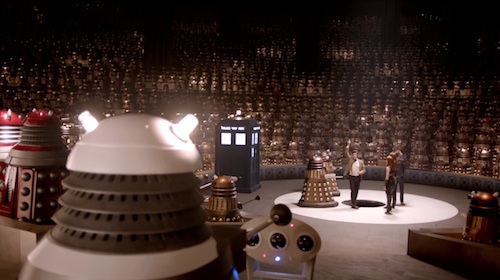 So what can we expect from this season, based on "Asylum of the Daleks?" The first thing we all know is coming is the ramp-up to next year's 50th anniversary extravaganza. What exactly that anniversary will look like has not been announced, but I don't think it's a stretch to say Moffat is already building towards it by opening this season with an appearance by "every Dalek ever." The Daleks have been the Doctor's greatest enemy ever since they first appeared back in Doctor Who's first season 1963, and the gathering here of nearly every type of Dalek from that long history—and the brief appearance of Skaro, their homeworld—is a nice homage to that legacy. (As is the clever reinvention of the "Robomen"—humans converted to Dalek slaves—who first appeared in the 1964 story "The Dalek Invasion of Earth.") Moffat has stated that his intention is to make the Daleks scary again, which—if he can pull it off—would be the greatest contribution he could possibly make to this somewhat overused monster. 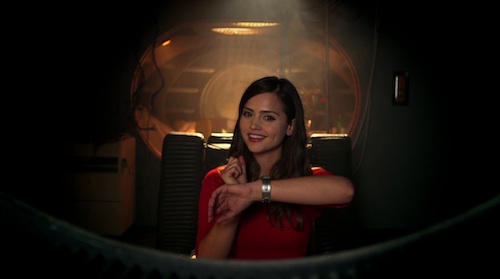 All the hype over the assembled Dalek hordes turns out to have been something of a red herring, however, albeit a thematic one. This episode doesn't just see new Daleks standing next to old ones, but new and old companions intermingling as well. The biggest shock of this episode was the prominent role of Jenna-Louise Coleman; it has long been public knowledge that Ms. Coleman would take over companioning duties from Karen Gillan and Arthur Darvill in this year's Christmas special, but Moffat and Co. had successfully—and impressively—kept her appearance here a secret. (It is virtually impossible to keep anything under wraps in this age of internet omniscience, and kudos to Moffat for his willingness to lie through his teeth to the media—and us—in order to deliver these surprises.)

In retrospect, it was probably predictable that Moffat would incorporate the companion with whom the Doctor will end this season into its beginnings, but it was an unexpected pleasure nonetheless. And a pleasure, too, to discover that she is delightful: smart, spunky, flirty, cute as a button, and more than a bit arrogant. These are all words that could describe Amy Pond as well, but Coleman promises to bring a whole different—perhaps slightly more joyous and egalitarian?—energy to her interactions with the Doctor. ("Is there a word for total screaming genius that sounds modest and a tiny bit sexy?") 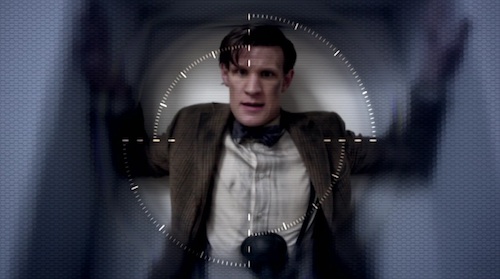 That's assuming, of course, that this character is, in some way, the same character Coleman will play later in the season. But the mystery of how that might happen is our hook here, just as Amy's wedding and the Doctor's death were, respectively, the intriguing destinations for Series 5 and 6. For, after navigating our heroes a little too cleverly through the Dalek asylum, Coleman's Oswin Oswald is: A) revealed to have already been converted to a Dalek; and B) presumably killed in the destruction of the planet. I'll admit, I didn't see the reveal coming, but it was smartly (and more than fairly) foreshadowed throughout the episode, from the earlier inclusion of  people (Anamaria Marinca and David Gyasi) who didn't realize they were Dalek puppets, to Oswin's mysterious ease with Dalek technology, to the repeated point-of-view shots of the Doctor viewed through a Dalek eyestalk. (Not to mention, of course, the Doctor's excellent question about where she got the milk to make all those souffés.)

(My favorite thing about the way Moffat has constructed this mystery is that it wouldn't be a mystery if not for the constant media circus around Doctor Who. If we all didn't know ahead of time that Coleman was going to become a companion, she would appear to be just a one-off character here: as it is, Moffat is actually taking advantage of the external hype and speculation to ensure we'll spend the next four episodes wondering how he will pull this off and bring Oswin back.) 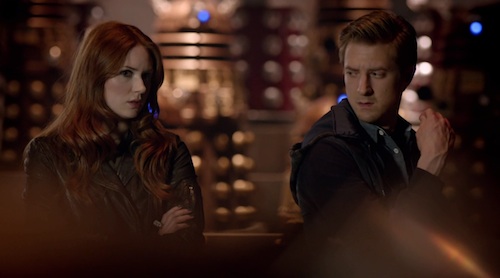 So we have our hints about the plot of this season: what about its themes? It's early yet, but I'd suggest we need look no further than the (rather clichéd) fist tattoos that super-model Amy Pond is wearing in her photoshoot early in the episode: "Love" on one hand, "Hate" on the other. It's the theme that runs throughout this episode—according to Oswin, the way the Daleks convert you is to "subtract love, and add anger"—and it's the mystery at the center of Amy and Rory's problems. (Amy's apparent anger at Rory turns out to be a profound—if misguided—expression of her deeper love, which the Doctor cleverly forces her to admit.)

And Oswin's story here fits perfectly into an overarching theme that runs throughout the Moffat era of Doctor Who: that of people turned into instruments of destruction, and overcoming that programming through the essential human quality of love. (Dr. Bracewell in "Victory of the Daleks," Rory-the-Auton in "The Pandorica Opens," Craig-the-almost-Cyberman in "Closing Time," and River Song in "Let's Kill Hitler" are just a few examples.)

It's a theme, too, that has run throughout the Doctor's story ever since the series returned in 2005: the Doctor's dual nature as a figure of compassion (the healer his title implies), and as an icon of fear and destruction (the Predator, the Oncoming Storm). Moffat hit this theme all throughout last season—most notably in "A Good Man Goes to War," which dealt head-on with the terrible ramifications of the Doctor's terrifying reputation—and I've argued before that there is a way to see this conflict as the central conundrum of Moffat's entire era. In "killing" the Doctor last season, Moffat laid a large part of the Doctor's terrifying-warrior persona to rest, and now he erases a little more of it, by removing him from the collective memory of the race that feared him the most. ("We have grown stronger in fear of you," Oswin-the-Dalek tells him here. "I know," the Doctor says. "I tried to stop.") 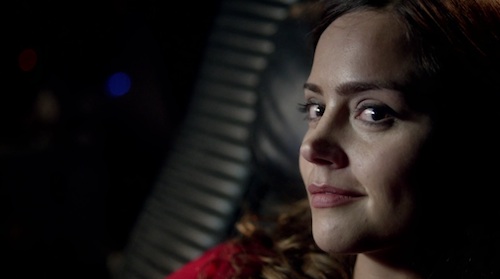 I don't waste a lot of energy trying to predict the plot turns of this show—I'm almost never right, when I do—but it occurs to me that the Doctor's companions have almost always served a humanizing, softening role for him. (Certainly this has been true in the new series, and it was almost always true in the classic series.) A companion who is somehow half-Dalek/half-human could provide a marvellous twist on that formula, complementing and contrasting with the duality of love and anger that is inherent in the Doctor, and perhaps forcing him to be—for the first time since the Fourth Doctor traveled with Leela?—the humanizing influence.

Is the Doctor a figure of anger, or one of love? Moffat has been grappling with that question since he first took the reins of this show, and I suspect we're in for more exploration of that theme this season. He ends this episode the way he ended last season: with a repetition of the question that must never be answered: Doctor who? It began as a self-referential joke, and it became a plot device, but I suspect that the question of who this man really is, deep down, will turn out to be at the heart of Moffat's masterplan.

Of course, the fun of this show is, I could be completely wrong about everything.