Every time I write one of my grumpy, critical, overly analytical reviews of Doctor Who—which, this season, has been at least one review out of three—there's always an imaginary voice screaming at me in my head. For fuck's sake, it says—because that's how this imaginary voice talks to me—why can't you just sit back and enjoy this show?

That voice is a projection of what I imagine at least some of my readers must be thinking (even if they're polite enough not to say so in the comments). Though it's a weakness for a critic—and though it never actually stops me—I really do hate the idea of pissing all over something someone else might have loved, or taking far too seriously something that was meant to be fun and diverting. ("Mummy on the Orient Express" really wasn't such a bad episode, after all: why did I have to be such a solemn dick about it?)

But that voice in my head is also the voice of my own inner fan, the one that goes into every episode wanting it to be great. It's the part of me that would relish the opportunity to stop thinking so much, and lose myself in an hour of Doctor Who, and remember everything I love about it.

Which, thankfully, is what I got to do last night. "Flatline," the second consecutive episode from Who newcomer Jamie Mathieson, is a blast. Funny, original, and thrilling, with (pardon the dimensional pun) some hidden depth, this is a fantastic, utterly batshit hour of television that only this show could deliver.

God knows I can be as grumpy as the next critic, but seriously: anyone who can't love a Doctor Who episode like "Flatline" should get out of the Doctor Who-loving business.

"You look chipper." — The Doctor

Well, yes, that's because I am chipper. This one is firing on all cylinders, and doing so in a way that unobtrusively develops—even slightly corrects—some of the themes and arcs we've been discussing all season.

Let's start with the basic setup, which provides the first genuinely original concept we've had in quite a while. It's no easy thing to create a new, memorable Doctor Who monster, but the two-dimensional creatures the Doctor eventually names The Boneless are a wonderful addition to the menagerie. They're a thought-provoking fresh idea,1 and they're exactly the right level of creepy for Doctor Who: more unnerving than actually horrifying here, but with the potential to be really scary down the road. Best of all, Mathieson wisely doesn't exhaust them in this one appearance: suitable to their completely foreign nature, we learn very little about them, leaving buckets of potential left to explore. (Their smudgy, shifting appearance makes them perhaps unlikely to become iconic—it would be hard to market a Boneless action figure—but I find that refreshing, as I do their lack of a handy catchphrase.) 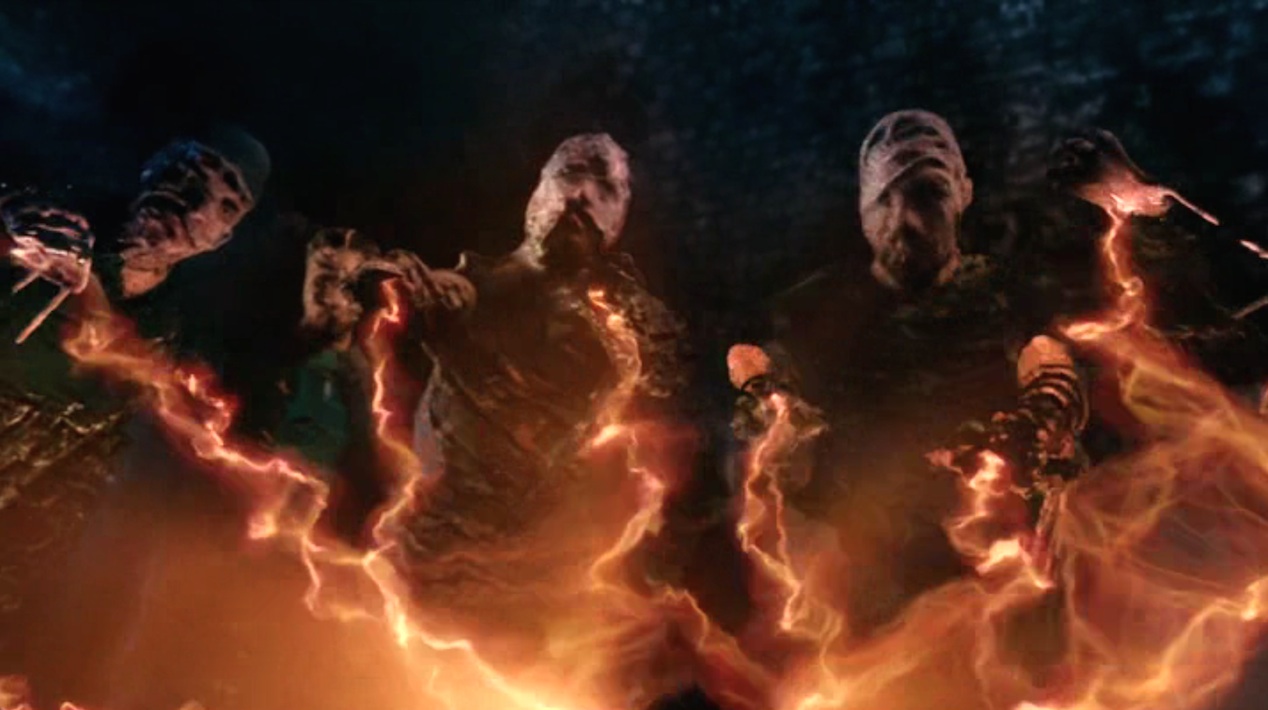 And the construction of this episode is excellent. In direct contrast to the limited environments and repetitive beats of "Mummy," "Flatline"—directed with confident verve by Who veteran Douglas Mackinnon—has a tremendous amount of movement and variety: it constantly gains momentum from changing settings, well-drawn supporting characters, and clever new twists on the danger. It feels epic, which—considering that the entire story takes place around an ordinary council estate in Bristol—is a fairly impressive achievement.

(In watching this episode, I was reminded of something Moffat once said: "I think you know you’ve got a good idea for a Doctor Who story if you think, ‘Well, I’ve just blown that feature film idea forever, haven’t I?’ That's the size of story that gets you through 45 minutes of Doctor Who.")2

"Mummy" didn't show me that Mathieson can bring that sort of scope, creativity, and energy, but "Flatline" delivers in spades: by the end of it we feel like we've been on a real, full-bodied adventure.

"Flatline" would have been a good hour of Doctor Who from the story alone, but what makes it a great episode is the clever way Mathieson finds to further develop this season's Doctor/Clara arcs. With the Doctor trapped in his exteriorly3 shrinking TARDIS, Clara has to take up the psychic paper, the sonic screwdriver, and the title of Doctor. (Doctor of what? she is asked. "Well, I'm usually quite vague about that. I think I just picked the title because it makes me sound important.") 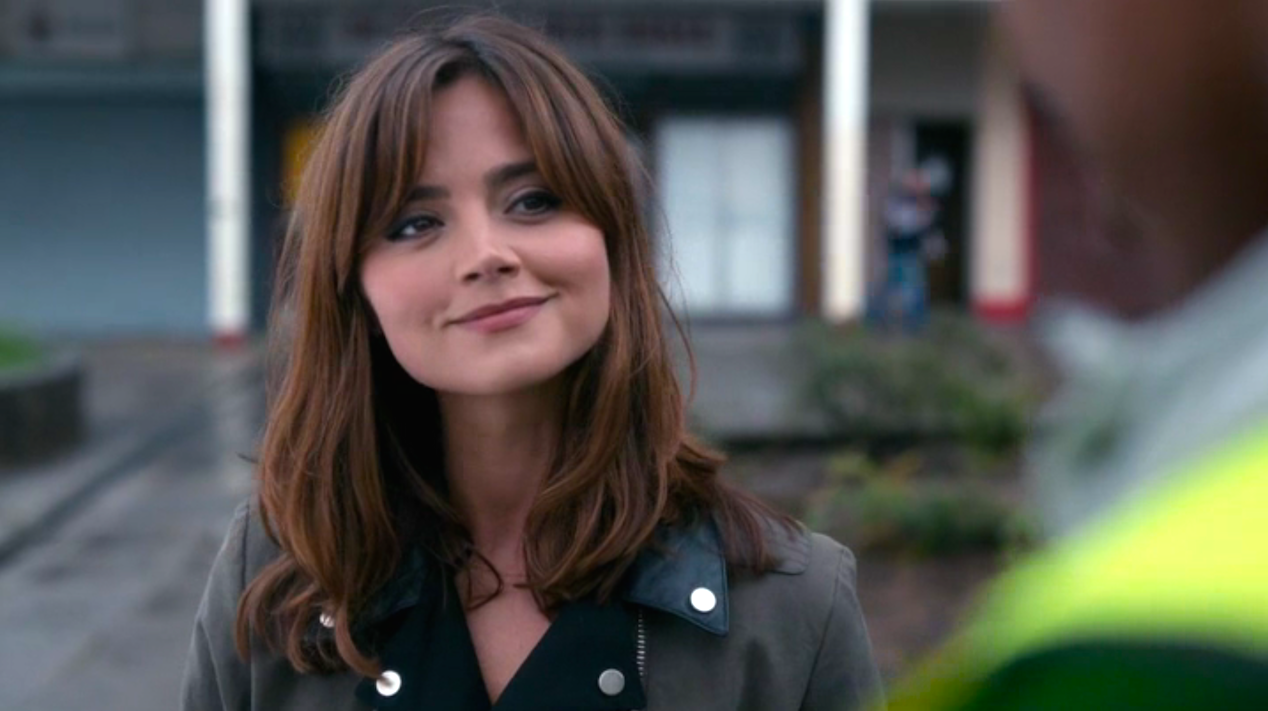 Everything about this is a delight, from the sheer joy Clara gets in playing the Doctor, to Capaldi's growing frustration and indignity, to the funny-but-never-quite-ridiculous physical comedy of the Doctor and his tiny TARDIS. (If the rest of the episode wasn't so well-balanced, moments like the Doctor crab-crawling the TARDIS along like Thing from The Addams Family could have been groan-inducing; here, however, I not only thought it worked, but laughed out loud.)

But the best part is that none of this is just throwaway fun. (Not that there's anything wrong with fun for the sake of fun.) "Flatline" is also picking up the serious themes of the season, and advancing them in tones of action and humor. This entire season has tracked Clara's growing reservations about the Doctor and his methods—his callous manner, his apparent disregard for individual lives, his lies—culminating in "Kill the Moon" when he pushed her too far and drove her (temporarily, as it turned out) to quit her post as companion. "I can't do this anymore," she said last week. "Not the way you do it."

But where the Doctor angered her in "Moon" by forcing her to assume his role, now—when she has to—she steps into it naturally, willingly, even joyously, adopting both his mannerisms and his point-of-view in the process. ("I just hope I can keep them all alive," she says. "Welcome to my world," he replies.) She adopts his trademark braggadocio—"I'll tell you who I am: I am the one chance you've got of staying alive"—and even pushes her "companion," Rigsy (Joivan Wade), too far. ("You really do throw your companions in at the deep end, don't you?" the Doctor marvels.) She gets some insight into how the Doctor works—"Pretty soon a leader is going to emerge, and you need to make sure that leader is you"—and she learns to appreciate lying. ("Congratulations," the Doctor says, when he discovers she's even lied to him. "Lying is a vital survival skill…and a terrible habit.")

She does most of this with the safety-net of the Doctor in her ear (and in her purse), but at the key moment she is on her own. "Flatline" turns into a perfect companion piece to "Kill the Moon," both of which left the fate of humanity entirely in Clara's hands: in the first case she resented that responsibility, but here she embraces it. "Doctor, what would you do now?" she wonders aloud, but then realizes that's the wrong question: "No, what will I do now?" The Doctor told her in "Moon" that it was time to take the stabilizers off her bike, and here he tells her that she's "stronger than you know." And she proves him right: when it comes time to make the hard choices, she doesn't waver—in fact, she triumphs.

I've grumbled about Clara's characterization this season because it has vacillated between strength and weakness; I still take issue with some of what's been done with her, but this is the Clara I've been wanting to see: smart, strong, brave, self-reliant, and fighting the good fight for the right reasons. 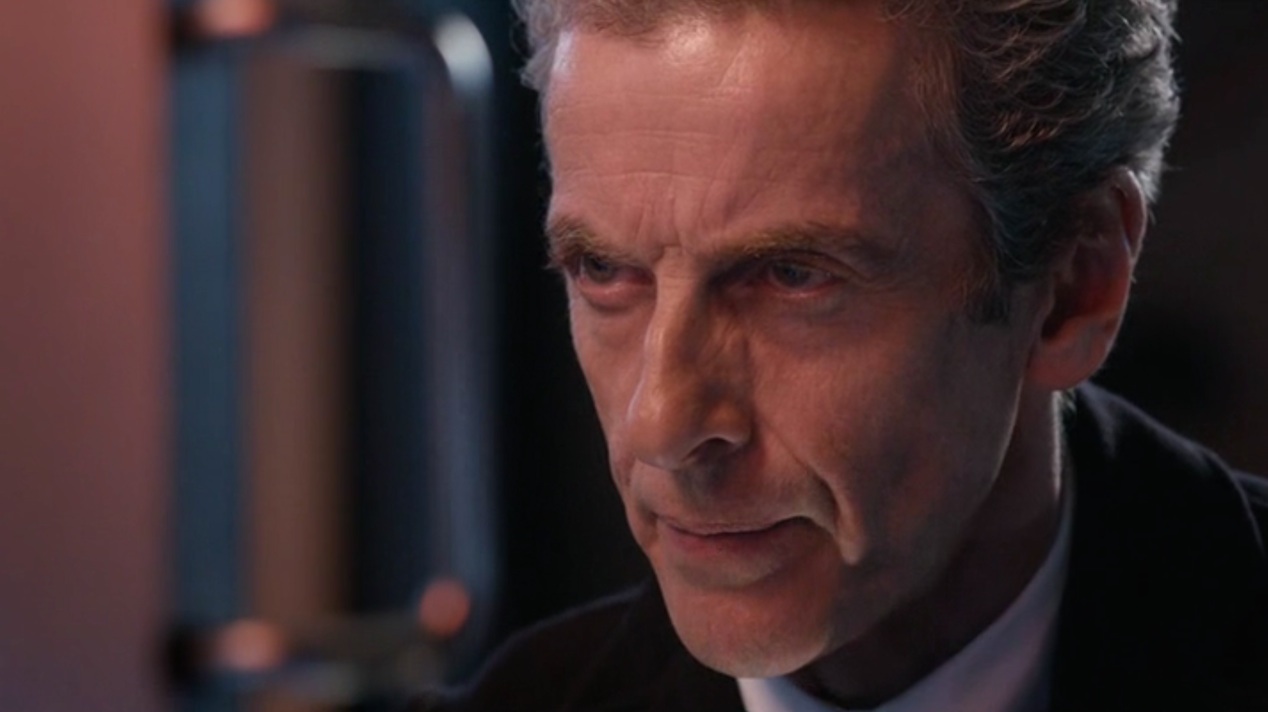 And it's not just Clara who learns a few things: though less overtly, I think the Doctor does as well. From Capaldi's first episode, mirrors and reflections have been a recurring trope. ("Have you ever looked in a mirror and thought, 'I've seen that face before?'" he asked in "Deep Breath." And in "Time Heist," Saibra asks him, "Could you trust someone who looked back at you out of your own eyes?") Here, the Doctor is literally looking through Clara's eyes—at one point looking directly in a mirror—and she becomes a reflection of him, letting him see something of how he comes across and what it means to be the Doctor himself.

Seeing yourself reflected in another is complicated, however. At the end of the episode, Clara has done a very passable impersonation of the Doctor, and it seems to both please and trouble him. Clara is justifiably proud of herself: a lot of people died, but she saved some, and she saved the world. So, on balance… "On balance?" the Doctor asks in surprise. "That's how you think, isn't it?" she responds. This is another recurring theme—the Doctor concentrating on saving who he can, and not being sentimental about those he can't—but it seems to worry him as he sees it reflected back at him. He thinks that way, he says, "largely so other people don't have to." Clara has seen her role previously as his conscience—"the alternative is developing a conscience of your own," she said in "The Caretaker"—but here the dynamic is changing: she is becoming less a counter to him and more a reflection of him.

As I've said in previous reviews, the Twelfth Doctor is different from his immediate predecessors: he's not so much about the fun, and he's not so much about the glory, and he's not so much about being nice. He's about getting things done. At the end of "Flatline," Clara wants to take a well-deserved victory lap, and have him tell her what a good Doctor she made. But he becomes stern with her: "You were an exceptional Doctor, Clara," he says. "Goodness had nothing to do with it." Is he disappointed in her, to see her make this shift towards becoming someone more like him? Or is he just wanting to reinforce the point that being like he is means, sometimes, making terrible decisions and living with the consequences? We've talked all season about how Clara's motivations for traveling with the Doctor have been questionable, but here she rises to every challenge and becomes as worthy a companion—as worthy a partner—as he's ever had. But that means recognizing that this is a game played for mortal stakes: it's not about approval and approbation, it's not always fun, and it's not always possible to be nice.

This is all good stuff, and—unlike in "Mummy," where it was rather shoehorned in—it all comes about organically from the story: this is wonderful, mature, thought-provoking character work woven seamlessly into an excellent, exciting sci-fi adventure. That's what I hope for from every episode of Doctor Who, and, in "Flatline" Jamie Mathieson has delivered one of the best overall episodes in years.

Next: "In the Forest of the Night"