As we've already discussed, Doctor Who has turned its lens outward, rather than inward, in Season Ten. Questions about the nature of the Doctor and his relationship to his companions have been back-burnered (though not completely removed), and the show is focusing more on the sorts of social critiques and political satires that typified much of the classic series.

Like "Thin Ice," Jamie Mathieson's "Oxygen" presents soulless corporate greed as the root of all evil. (I suppose we could pick up threads of this theme in the sterile emoticon robots of "Smile," and the heartless landlord of "Knock Knock," too, if we really wanted to stretch for them.) Season Ten is positioning the Doctor and his working-class companion as rebels against the dehumanizing effects of capitalism, philosophical opponents to a mentality that only cares about—as the Doctor says here—a bottom-line where human life has no value. "Like every worker everywhere, we're fighting the suits," the Doctor summarizes, giving the line a clever double-meaning. 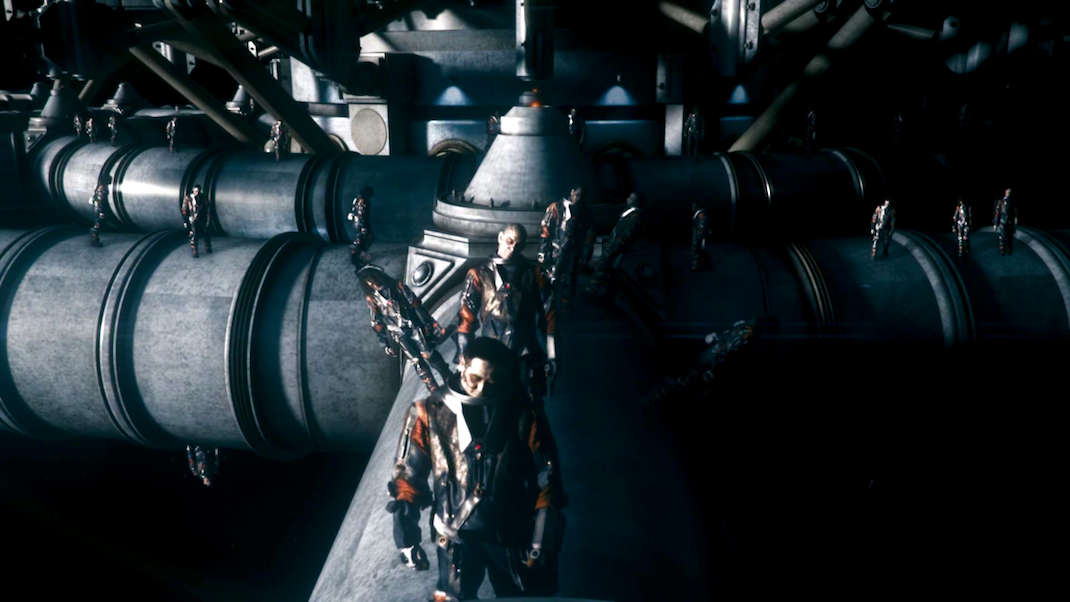 It's a timely (if not particularly sophisticated) message, and it's one of the things I look for in Doctor Who. Part of my resistance to Capaldi's 12th Doctor in his first few seasons stemmed from how much he came across as an authority figure. (For the record, I have the same problem with Jon Pertwee's Third Doctor.) My ideal Doctor is a trickster, an outsider, and a bit of an anarchist. He's not about restoring order and keeping the peace: he's a living monkey-wrench, the kind of guy who will tear down your entire society without a moment's hesitation if he happens to take issue with it. ("Because this is what I do, every time, every day, every second," the Eleventh Doctor said in "The Beast Below," slamming his fist down on the "PROTEST" button of the Starship UK. "Hold tight, we're bringing down the government.")

So I enjoyed "Oxygen," both for its intentions and for its execution. On first viewing, Mathieson's treatment of his theme is a little broad, and, as a result, a little implausible. But on further consideration, it's not that big of a stretch. Take the real-life notion of the "company store" to its logical extreme, and it's not hard to imagine an intergalactic mining company charging its own workers for the very air they need to breathe. (And the notion that a corporation would kill its own workers just to save some money is so far from implausible that it really shouldn't take the Doctor so long to figure it out.)

And Mathieson layers some more subtle and poignant stuff around what appears, at first, to be a somewhat ham-fisted scenario: this is an episode that becomes deeper and more nuanced on repeat viewing. The episode opens, for example, with the Doctor (in voice-over) lecturing one of his classes about the dangers of space:

"Space: the final frontier. Final because it wants to kill us. Sometimes we forget that, start taking it all for granted. The suits, the ships, the little bubbles of safety, as they protect us from the void. But the void is always waiting."

The deliberate invocation of Star Trek in the Doctor's speech is more than a wink and a nod: once we've experienced the story as a whole, we realize it's a challenge to our own idealism. Star Trek, after all, presented a post-capitalist utopia, in which money itself had been eliminated, and in which space was a place where people worked selflessly and harmoniously together for the betterment of all humankind. "Oxygen," on the other hand, presents the more cynical and plausible possibility: a future in which space exploration becomes just another way for corporations to get rich feasting on the needs of a disposable working class. I don't think it's a stretch to read corporate capitalism itself as "the void" here, promising its participants tiny, temporary little bubbles of security while always waiting to consume their lives. 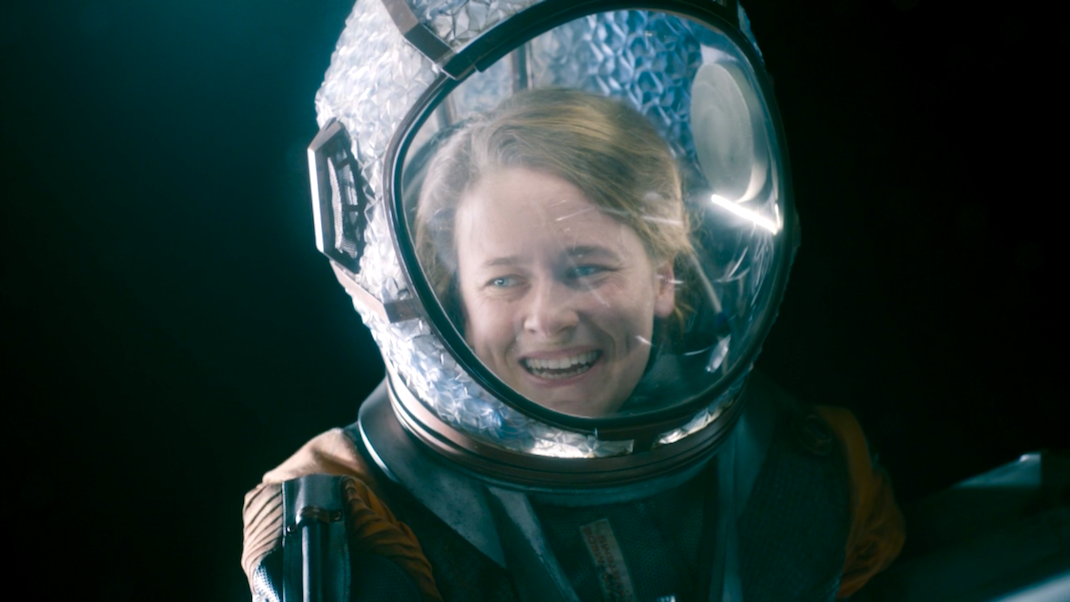 And the rest of the pre-credits sequence supports this reading, expanding on rewatch from an intriguing cold-open to a potent and heartbreaking thematic statement. During this speech we see two crew members—Ellie (Katie Brayben) and Ivan (Kieran Bew)—drifting through the vast emptiness of space, finally landing on the outer shell of the mining station, the Chasm Forge. The Doctor's voice-over gives way to Ellie's, as she speaks aloud on her radio. "This isn't the best timing, I know that" she says. "Maybe it's because everything is so messed up, the trivial stuff just falls away. You realize life can be so brief." If they get through this, she says, she wants to have a baby with Ivan.

But Ellie won't get the chance: she's not going to get through this. (Sadly, she doesn't even get the chance to express these feelings, since her suit's communication system isn't working and Ivan can't hear her.) She is killed by the Suits—literally and figuratively—and becomes just another mindless, soulless drone serving the corporate agenda. She ends up spending her entire brief life working just to survive—working for that bubble of safety, to eke out enough to merely breathe—and she never gets the chance to really live. It's a brief, marvelously poignant metaphor in microcosm: like countless workers before her, she sold her soul to the company store. 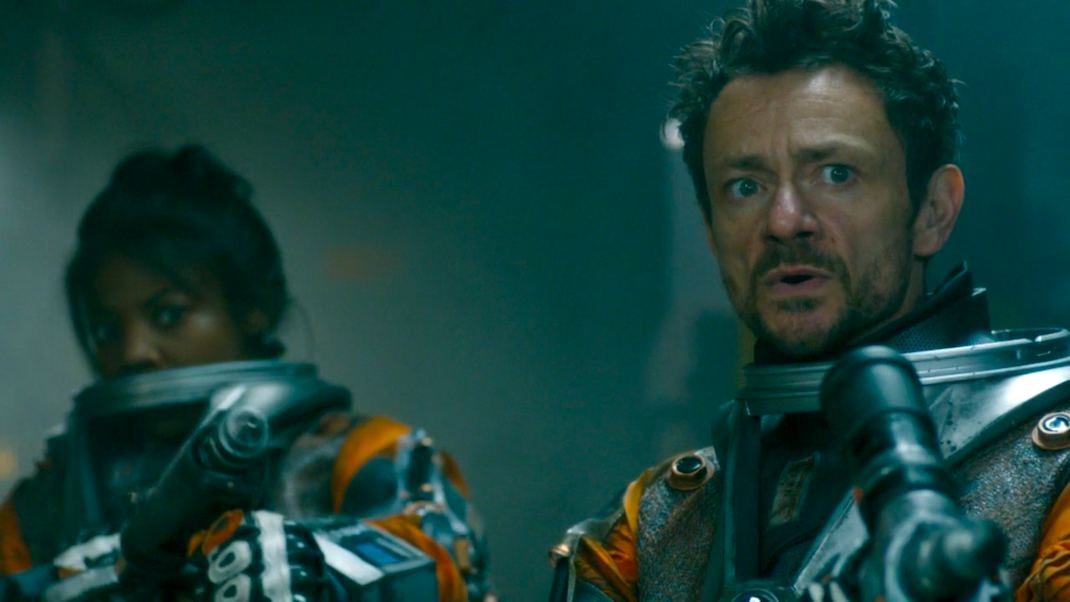 It's a slight flaw in Mathieson's script that Ellie—who dies before the credits roll—is easily the most sympathetic and well-developed crew member aboard the Chasm Forge. The others—Ivan, Abby (Mimi Ndiweni), Tasker (Justin Salinger), and Dahh-Ren (Peter Caulfield)—register as real people far better than the cardboard cutouts of last week's "Knock Knock," but we still never learn enough about them to really grow attached, or for Mathieson to develop his theme of oppressed workers through individual stories. (I confess I didn't even realize that Ivan was the same crew member Ellie wanted for her baby daddy: he seems disturbingly non-affected by her death until she shows up at the very end.) Finding time for just one conversation with a worker about who they are and why they're there would have gone a long ways towards giving this one a little more emotional depth. ("Base-under-siege" stories like this tend to work better as two-parters: "The Impossible Planet"/"The Satan Pit," "The Rebel Flesh"/"The Almost People," "The Hungry Earth"/"Cold Blood," etc., all gave us a little more time to get to know and care about the besieged.)

But there's enough good stuff crammed into this episode to make that a minor complaint. Mathieson and director Charles Palmer work in some sly asides that enrich the overall theme of oppressed workers—like the cheery motivational posters, and the crew members' protestations that "the Union is a myth"—while finding time to stage some genuinely suspenseful sequences with real human stakes. (Bill's near-death from vacuum exposure is truly, properly upsetting, and her near hallucinatory march across the surface of the station is one of the better sequences Doctor Who has produced in a while.) It's also refreshing that Mathieson sets himself the challenge of stripping away the Doctor's props—no TARDIS, no sonic-screwdriver—forcing him to rely on his wits: it leads to a much more satisfying denouement than the too-easy one, for example, that resolved the otherwise laudable "Smile."

(In the Doctor's solution here, there are echoes of George Lucas's film THX-1138—another story about soulless working conditions—in which Robert Duvall manages to elude his pursuers just long enough to exhaust their budget for pursuit. In science-fiction, as in the real world, sometimes the only answer is to make it more cost-effective for corporations to let people live than it is to kill them.)

The end of the episode comes—tentatively—full-circle back to a more idealized picture of the future: the Doctor tells Bill casually that this event may or may not have led to a revolution that meant "corporate dominance in space is history." It's a oddly optimistic note on which to end a very cynical story, as the Doctor and Bill have presumably now ushered in the nobler sort of Star Trek universe the Doctor invoked in the beginning. But I think it works magnificently as a pay-off for the Doctor exemplifying his values. At the beginning of the episode, he has to convince Bill and Nardole that they need to stick around and help the four lonely souls still alive on the Chasm Forge. ("The universe shows its true face when it asks for help," he says. "We show ours by how we respond. Any questions?") It's an expression of his fundamental belief that individual lives have value, and a deliberate rejection of the "bottom-line" mentality represented by the corporation. The stakes of this episode seem relatively small—just four lives—but the Doctor's commitment to saving them expands outward and inadvertently ushers in a new, more compassionate age in which human life has value.

It's just a small act of decency, a minor act of protest against dehumanization, and it ends up changing the universe for the better. That's what I look for from a Doctor Who story.