In the modern era of Doctor Who, the third episode of any given season can frequently be described—most generously—as "skippable." The three-spot has hosted only one truly essential episode ("School Reunion"), with the remainder all falling somewhere between passably harmless and unforgivably execrable. There are watchable episodes to be found at that point in the schedule, to be sure—I rather like "The Unquiet Dead," for example—but stinkers like "Victory of the Daleks," "Curse of the Black Spot," and "Robot of Sherwood" mark this forever as Doctor Who's "take-out-the-trash" slot. (For my money, I'd also classify "Cold War"—the third episode of Season 7B—as another discard to the three-spot dumping grounds.)

It's deliberate, of course, and understandable: premieres are important to get people watching, and second episodes are important to keep them watching, but third episodes are relatively disposable. (In Russell T Davies and Benjamin Cook's book The Writer's Tale, Davies confesses to being unhappy with the finished script for "Planet of the Ood," and so he moves the schedule around to make it—you guessed it—the third episode of Season Four.)

All of which is to say that—after two strong entries in "The Pilot" and "Smile"—I had carefully lowered my expectations this week. And that made Sarah Dollard's "Thin Ice" rather a pleasant surprise.

To be fair, it is a little disposable, composed of a lot of elements that could be called "formulaic" (if we're being charitable) or "derivative" (if we're not). The setting—the Frost Fair of 1814—never becomes interesting enough for us to view this as anything other than Doctor Who dipping into the BBC's vastly overused stores of 19th century costumes. (The very first Doctor Who story took place in 100,000 BCE, but since then—with all of human history to choose from—we've spent a suspicious amount of time in the cost-saving environments of the 1800s.) The ethical dilemma of the piece—a sympathetic, mile-long alien fish chained beneath the Thames—is a shallow, slightly improbable conceit harking back in various ways to "The Beast Below," "Kill the Moon," and the Torchwood story "Meat." The thin supporting characters—adorable children "living rough" in London—inevitably beg unflattering comparison with the considerably better-drawn urchins of "The Empty Child" and "The Doctor Dances." And I would call adversary Lord Sutcliffe (Nicholas Burns) "cardboard," but that would be an insult to a perfectly decent packing material: he's not cardboard, he's paper-thin. (There are few characters worse than a stock villain who knows he's a stock villain.)

But, for all that, "Thin Ice" manages to be a fair amount of fun, and makes room for some quality character work. If it's filler, it's good, quality filler: Doctor Who's trusty "monster-of-the-week" formula done well. As I've said before, Steven Moffat seems determined to take Doctor Who back to the basics in Season Ten, and "Thin Ice" is an enjoyable, back-to-the-basics kind of episode.

As such, I don't have much to say this week, but let's look at a few high-points. 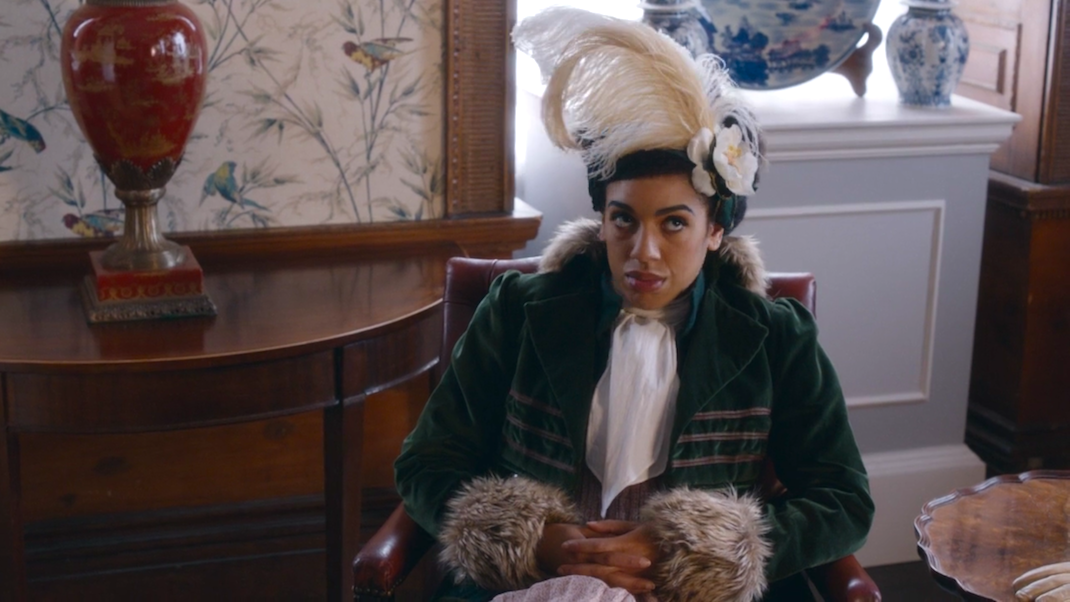 As familiar as its individual elements are, "Thin Ice" provides its fair share of pleasures. Director Bill Anderson—new to Who—provides a snappy pace and some nice visuals. (The underwater scenes—with the giant eye of the creature—are particularly impressive.) And the central metaphor is thin, but always timely: a soulless member of the upperclass having the poor chewed up to fuel the engines of wealth. (On a purely puerile level, it's hard not to like a plot that centers around people becoming explosive bricks of alien fish-shit.)

The chief charms of this episode, however, come from the interactions between the Doctor and Bill, as Pearl Mackie continues to be exactly the breath of fresh air that Doctor Who needed. The Doctor/Companion chemistry is always delicate, and some combinations just generate more power than others. Sarah Jane Smith (Elisabeth Sladen) was a perfectly decent companion to Jon Pertwee's Third Doctor, but the magic didn't happen until she was paired with Tom Baker's Fourth Doctor. Sylvester McCoy's first season with Mel (Bonnie Langford) is a little better than its reputation, but the Seventh Doctor only truly came into focus once he was joined by Sophie Aldred's Ace. And what we think of as the deep connection between Rose (Billie Piper) and the Doctor didn't really happen—for better or worse—until David Tennant's Tenth Doctor arrived on the scene.

Though I wouldn't want to disparage the delightful Jenna Coleman—who bore none of the blame for her sometimes frustrating character—"control-freak" Clara was a better companion to Matt Smith's childlike Eleventh Doctor than she was to Capaldi's older, more serious Twelfth. Now Bill—as strong as Clara, but more down-to-earth, and less smugly self-confident—seems to be bringing out the best in Capaldi's Doctor. I don't just like her, I like him better—finally—for being with her.

We've talked already this season about the education and acclimation of a Doctor Who companion, and Dollard continues here to usher Bill deftly through her emotional paces. Last week it was about her coming to understand that traveling with the Doctor means having a responsibility to try to save everyone; this week it's about realizing that the Doctor can't save everyone. She is traumatized to see the cute pickpocket Spider (Austin Taylor) sucked through the ice to his death, and properly aghast at realizing the Doctor isn't more traumatized. (Mostly, he's relieved that he managed to pry his sonic screwdriver from the kids cold, soon-to-be dead hands.) She wants to know how many people the Doctor has seen die, but he can't tell her: the number is too big. And then she wants to know how many people he himself has killed—but he can't tell her that, either. "I've moved on," he says. "You know what happens if I don't move on? More people die…Do you want to help me, or do you want to stand here stamping your foot? Because, let me tell you something: I am 2000 years old, and I have never had the time for the luxury of outrage." 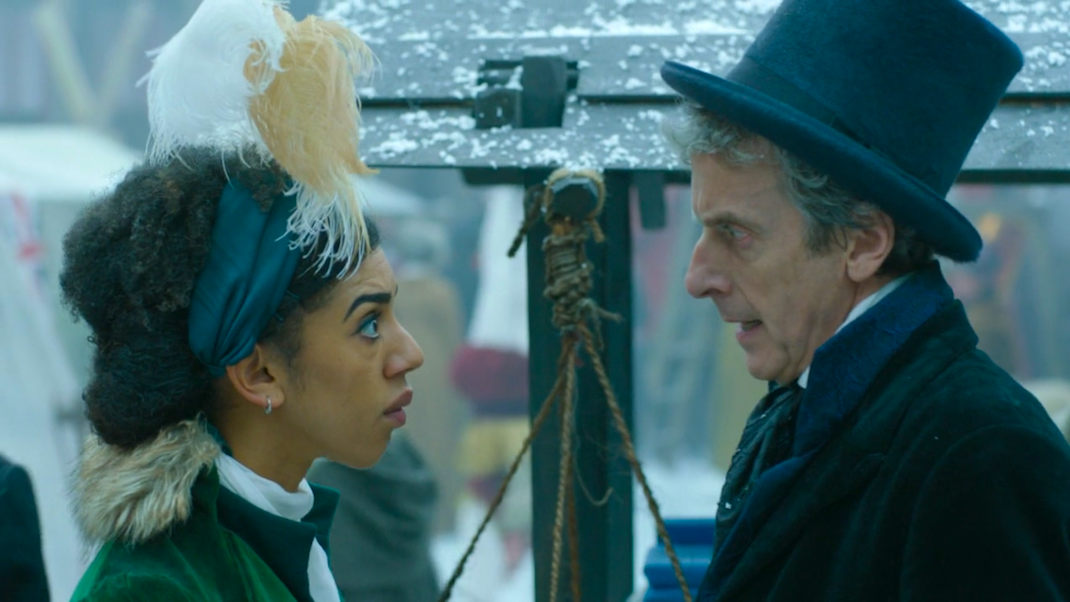 This is a lie, of course, as Bill realizes later in the episode. ("No time for outrage?" she scoffs. "Never had time for anything else, right?") But it's one of the refreshing things about Capaldi's Doctor that he plays his emotions closer to his chest, and doesn't rhapsodically sentimentalize every human he encounters as previous new Who Doctors—particularly the Tenth—were prone to do. Since his first episode, Twelve has been extremely practical—bordering on callous—about the people who die around him, and determined to just get on with the job. (In "Mummy on the Orient Express," he gave Clara a variation of the speech he gives Bill here. "So you were pretending to be heartless?" she asks him hopefully, when he has put a civilian at risk. "Would you like to think that about me?" he replies. "Would that make it easier? I didn't know if I could save her…There was a good chance that she'd die too. At which point, I would have just moved onto the next, and the next, until I beat it. Sometimes the only choices you have are bad ones. But you still have to choose."

So this is a common theme for the Twelfth Doctor's era. But, as with everything else so far this season, Moffat and Co. are managing to hit it in a lighter way than they have previously, without a lot of overly emotional sturm und drang. Bill realizes that he does care, late in the episode, after his speech to Lord Sutcliffe about the value of the "umimportant life." But Bill doesn't even need the big speech: my favorite moment in this episode—and the one that makes me unconditionally love Bill—comes just a few minutes after her fight with the Doctor. Are they still fighting? Kitty (Asiatu Koroma) asks Bill. "No," Bill says. "I've moved on." The Doctor hears her echo his own words, and Bill—seeing him notice—just sticks her tongue out at him. It's a wonderfully light and effortless reconciliation scene, better than any amount of maudlin dialogue or dramatic speechifying. 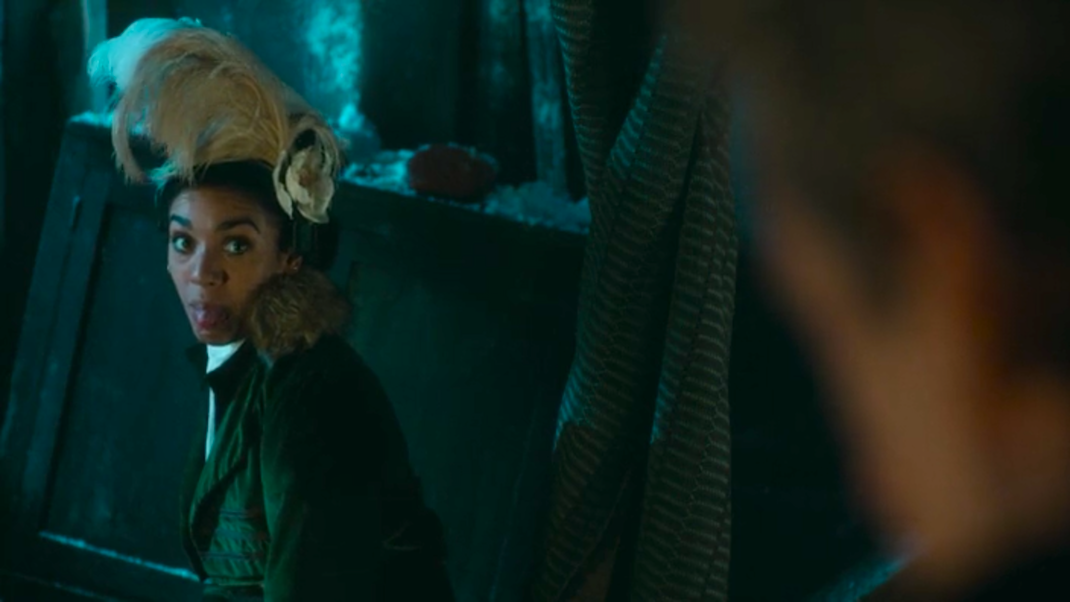 By the end of the episode—without Dollard needing to underline it in the text—Bill has quietly gotten on board with the Doctor's practicality. She winces when his escape plan involves suckering one of Sutcliffe's guards into the ice, but she doesn't protest: sometimes, the options really are limited. And when the ice is about to explode—with a lot of Londoners still on it—she simply grabs the few people she can save and runs for shore. "Forget them, there's no time," she says of the others: faced with the realities of this life, she's already becoming someone who can make the hard decisions, without a lot of fuss. You save who you can, and you move on.

This, too, is a welcome novelty for the Moffat era of Doctor Who. One of the frequent criticisms of Moffat's writing—an objection I share—is that he can be terribly patronizing towards his female characters: Amy Pond, River Song, and Clara Oswald all ended up being creations of the Doctor, to some extent; their story-arcs were all centered on his influence on them, to the point where their individual marvelousness ended up being a side-effect of their exposure to his own. (Clara's story-arc—to the extent it ever made any sense—was all about her becoming more and more like the Doctor.)

Bill, however, just seems to be independently fabulous. She was thirsting for knowledge and investigating mysteries even before she fell in with the Doctor, and she brings her own individual spirit and essential decency to the role of companion now. On paper, hers may be the most explicitly "student/teacher" relationship with the Doctor since Ace's, but—while she has things to learn from him—we do not have the sense that this season will be about his having to change her. She doesn't need changing. Like quintessential classic-series companion Sarah Jane Smith—and the most formidable of the modern companions, Donna Noble—Bill came ready to play.

Doctor Who's formula is a delicate one: the show has always been a balancing act between being about the story of the week, on one hand, and being about the Doctor/Companion relationship, on the other. The classic series came down more on the former side: we had to like the Doctor and his TARDIS-mates—they were our surrogates, our anchors, our entries into the story—but we didn't spend a lot of time gazing into their souls. The new series has, at times, gone too far in the other direction: what mattered often seemed to be how events shaped the characters, instead of the other way around.

It's early days yet—there's still plenty of time for it to go wrong—but Season Ten seems to be hitting just the right balance.

Read all my Doctor Who reviews here.