Warning: Contains major spoilers for this episode, so if you haven't watched it yet, you only have yourself to blame for reading further.

Oh, The Walking Dead, just when I'm ready to give up on you completely, you make me remember why I ever thought you were worth my time in the first place.

I'm not going to recap this episode like I usually do, or waste a lot of time pretending that there was anything in "Pretty Much Dead Already" worth talking about more than those final, gut-wrenching two minutes: we've wasted more than enough time this season getting here. Season 2.1 of The Walking Dead has all been leading up to this moment, making it just one long shaggy dog story: a padded, drawn-out set up for a staggeringly cruel—and thematically essential—punchline.

And it was almost worth it. It doesn't excuse how slow and wasteful this entire half-season has been, but the final scene of "Pretty Much Dead Already" is a triumph. Everything about the reveal has been brilliantly constructed, including how frustrating the build up towards it has been. It was about 20 minutes into Episode One that Sophia went missing, and we've been hanging around Hershel's farm since the opening minutes of Episode Two. These two storylines have seemed endless, and most of us were sick of both of them. Just last week I was complaining that it felt like we were never going to leave the farm, and predicting that Sophia would not be found until the season finale in the spring, when—I felt absolutely certain—she would be found alive, against all odds. "We'll find her," Carol says to Daryl in a sweet, peaceful scene this episode. "I see it." And I have to admit, I could see it too. 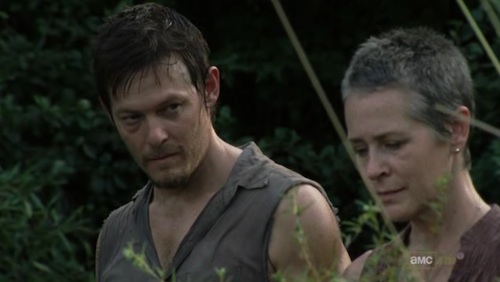 Congratulations, The Walking Dead, you got me, and you did it in a way that reminded me why I stick with you. Back in my review of this season's first episode, I admitted that my desire for The Walking Dead to develop a stronger narrative arc might really be a desire for order, for a sense of meaning and purpose that would counteract the bleak, chaotic, nihilistic worldview of the show itself. But for me, the value of The Walking Dead is that it does not exist in the same narrative universe as most fiction: there is no order, or purpose, or divine justice. Things don't work out the way we want them to, and stories don't unfold the way thousands of years of storytelling have trained us to expect. Hope and faith are not always justified, effort and redemption are not always rewarded.

In most fictional worlds, Sophia—the name, as I've mentioned elsewhere, means "God's wisdom"—would be the Holy Grail at the end of a long quest. Only by retaining their humanity, proving their worth, and sustaining their faith would our heroes be rewarded. In that comforting world, Shane would be the voice of doubt, the dissenting representative of coldness and realism who must be proven wrong. The little girl is almost certainly dead, Shane has been arguing for several episodes, and even as our logical minds agreed with him—Of course she's dead, she's a helpless girl alone in the zombie apocalypse—our narrative expectations, founded on a bedrock sense of justice, rebelled against the notion. Of course Shane would be proven wrong, because that's how these stories work. Nearly every hero in our collected literature is someone who has kept the faith, dreamed the impossible dream, and triumphed over overwhelming odds. Heroes don't play the odds, they don't take a realistic view, and they certainly don't leave a man—let alone a little girl—behind. 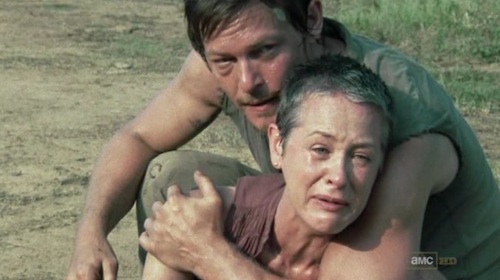 And if Sophia was the Holy Grail, Daryl was the knight. This season Daryl has been through ordeals, faced terrible setbacks, and suffered nightmarish visions: throughout it all, he has persevered in his faith and his determination, and he has been transformed in the process. In the reassuring world of fiction, of course Daryl would be rewarded at the end of his redemptive quest. Every law of storytelling suggested to us that Daryl would—after what would certainly be a trial of fire—return the innocent child, alive and whole, to her mother's arms. (I'm as guilty of thinking this way as anyone: hence my naive assumption, voiced last week, that the quest for Sophia would lead Daryl towards a confrontation with his dark half, his brother Merle.)

One of the reasons we take comfort in fictions is that they offer us an ordered, just universe, in which everything has meaning and things mostly work out the way they should.

But The Walking Dead has a wake-up call for us: life ain't fair, God ain't there, and—sometimes—shit just happens. 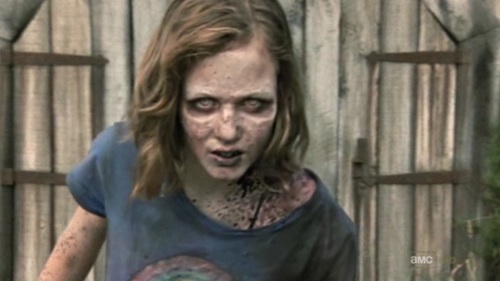 As anyone who's been reading my reviews knows, I've had my issues with The Walking Dead from the beginning.  But the one thing that has intrigued me about it all along—and made me see its potential—is its willingness to thwart our unconscious expectations and challenge our belief in a just, ordered universe. (This is a quality it shares with another show I review, HBO's Game of Thrones, and though I don't think The Walking Dead is anywhere near as good, it may actually be braver in this regard.)  The Walking Dead is, as I've argued before, the most godless show on television.

Rick, after all, tried faith for a moment—back in Episode One of this season—and his reward was that his son got shot. Hershel is a man of faith and compassion, and his reward is a barnyard full of corpses. Daryl had faith in the legend of a flower, and in the possibility of his own redemption, but he is doomed to disappointment. Carol is a woman of faith, and her reward is a dead daughter.

Shane, on the other hand, has lost all faith, and embraced the fact that it is a cold and indifferent world. His is the view that we most want to reject—like Dale, we do not want to see the world the way Shane does, or become what he has become—but he turns out to be right. 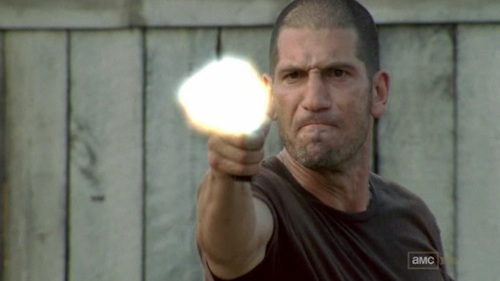 Rick, of course, is the voice of compassion, the champion of lost causes, the hero: Rick is the light to Shane's shadow, the one who still clings to hope and argues that it is not necessary to become a monster in order to fight them. And at the end of this episode Rick must pick up a gun and—like us—accept the terrible truths The Walking Dead would have us learn. There is no justice. There is no order.

You can spend all the time and effort you want trying to get the zombie out of the well, but the joke's on you: the fat, rotting son of a bitch is just going to fall back in.

You can haul your neighbors out of the swamp in the belief that they're still people, but they're not.

You can try to keep everyone safe, but you can't.

Things don't happen for a reason. There is no fate, no guiding hand, no purpose to it all. No one is looking out for the innocents, and the universe could not give less of a shit about fair play.

Last week I said that "Pretty Much Dead Already" would determine whether I would keep covering this show when it comes back from hiatus. Forty minutes into the episode I was still on the fence, but they got me with those last two minutes. I'm not a nihilist, and I don't see the universe as bleak and indifferent, but I definitely think there's a place on American television for a show this aggressively godless. As long as The Walking Dead stays true to its discordant, disquieting vision of the world, and keeps jerking us from our comfort zones, I'll keep coming along for the ride.

See you in February. 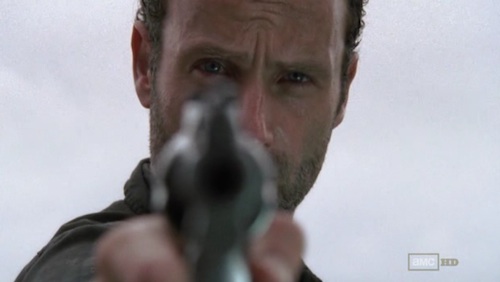