Forgive the lateness of this review: I've been playing a bit of catch-up this week. Fortunately, I don't have a great deal to say about "Cherokee Rose." It's a passable episode, but an uneventful one, and a bit of a placeholder. (On this show, a quiet episode like this usually means that we can expect two or three people to get eaten next week.)

The only zombie we see during this episode figures in a preposterous set piece that is constructed like a joke: How many morons does it take to get a walker out of a well?
The zombie itself—a bloated, waterlogged monstrosity, like a giant, clammy baby—is a masterpiece of disgusting creature design, and I rather like the focus on a single, practical problem: they don't want to shoot it and contaminate the water, so how do they get it out? 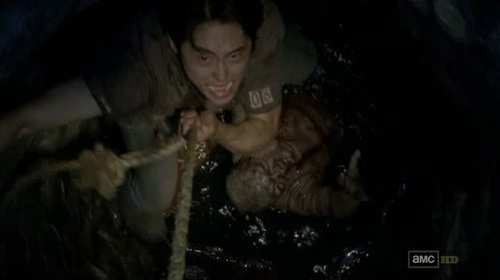 The way our intrepid band of survivors goes about solving this problem, however, does not give me hope for humanity's prospects. "Hey, I've got an idea: let's tie this thin rope around a couple of rusty pipes and lower one of our friends down the well! No, no, don't bother to check the structural integrity of that rotting pump we're anchoring it to. Even though it's already wobbling as we tie the rope to it, I'm sure it's strong enough to hold one nimble Asian man." If this is what the combined brain-power of the remaining gene pool can come up with, I vote that we put the zombies in charge.

So, it's a stupid scene—but fun, so I don't mind so much. And I must admit I laughed when the biggest problem turned out to be the structural integrity of the zombie. After all the trouble of getting a rope around him and pulling him most of the way out of the well, the fat bastard falls apart, with his entire bottom half and most of his bowels falling back into the well. ("Good thing we didn't do anything stupid like shoot it," T-Dog [IronE Singleton] deadpans.) 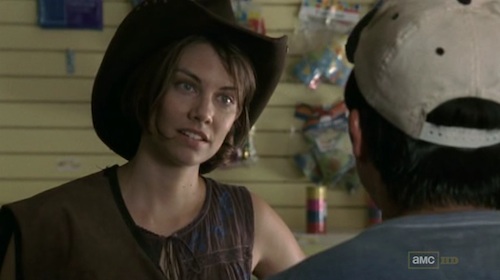 It's Glenn (Steven Yeun) who gets sent down the well, of course, and I'm pleased to see him finally getting some storylines. This is largely his episode all around, as another major subplot finds him getting it on with Maggie (Lauren Cohan) in an abandoned drug store. I'm all for the relationship, and the two shared some of the best scenes of the entire series last week, but did we have to jump to the sex quite so soon? I understand that, in a zombie apocalypse, people might be less inclined to draw out the foreplay, but for me it's just another example of the writers squandering an opportunity to make me care about these people. Clichéd though it would be, a slower romance—or even a few weeks of will-they/won't they—would have been just the kind of promising, interpersonal tension this show needs. Instead, the writers blow their load—no pun intended—in a single scene, without giving us much insight into either character. (Though both actors are excellent, and Glenn is amusingly clueless in his seduction techniques.) 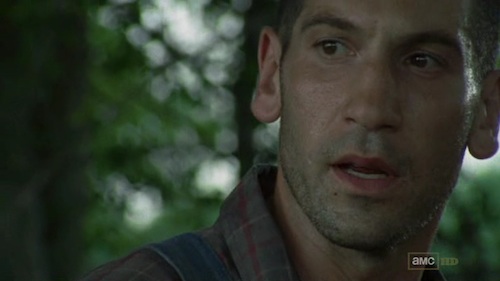 This week also sees Shane (Jon Bernthal) dealing with his conscience after murdering Otis. Asked to speak at Otis's funeral, we see Shane start to weave an heroic story around the act—to comfort the others, or course, but also to comfort himself and ease his guilt. "If not for Otis," he tells the group, "I'd have never made it out alive." (Well, that much is true.) Later, as he talks to Andrea (Laurie Holden), we see him take another tack at finding a narrative he can live with:

"Somebody is gonna die, and you better hope you're the one makin' that decision…Turn off a switch, the switch, the one that makes you scared, or angry, or sympathetic, or whatever. You don't think, you just act. 'Cuz odds are that someone else is counting on you…There ain't nothin' easy about takin' a man's life, no matter how little value it may have. But when you get it done, you have to forget it…I guess I haven't quite got that last part down yet."

I've had a couple of arguments with people about whether Shane's actions were justified: I think they were understandable, but nowhere near justified, and the show clearly thinks he has a lot to answer for. Shane is wracked with guilt, and his self-justifying narratives are obviously not going to be enough to sustain him. (I won't be surprised if we see him die soon.) 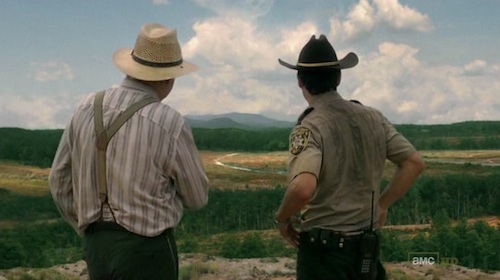 If there's a thin thematic line that runs throughout this episode, it's these comforting narratives we tell ourselves, and each other, to ease the pain, to give us hope, to make life bearable. Rick (Andrew Lincoln) lies to his son about Sophia, for example, out of the best of intentions, but he feels guilty nonetheless. Herschel (Scott Wilson) tries to get Rick to see the hand of God in his own story, providing the counter-narrative to the more pessimistic, atheistic line that The Walking Dead usually follows.

"Lori told me your story: how you were shot, in a coma. And yet you came out of it somehow. You do not feel God's hand in yours?…In all the chaos, you found your wife and boy. Then he was shot, and he survived. That tells you nothing?"

("It tells me God has a strange sense of humor," Rick says, reasonably. Herschel is a man of faith, but on this show the deck is stacked against any belief in a loving god.)

As we saw last week, it's not divine intervention but human deeds that make life bearable, that are as close as we're going to get to grace on this zombie-populated earth. Rick convinces Herschel of that, arguing that the old man should let the survivors stay on the farm. "If you saw how it is out there, you wouldn't ask [us to leave]," he tells Herschel. "You're a man of belief: if you believe anything, believe that." Faith means little, it's our actions that matter, and how we choose to live. 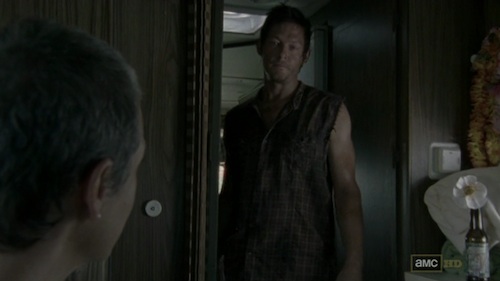 The best example of a small human kindness comes from the unlikeliest source: Darryl (Norman Reedus).  Throughout the episode people keep trying—and failing—to comfort Carol (Melissa Suzanne McBride) about Sophia's disappearance, offering her various lies, prayers, and platitudes. It's Darryl who comes up with a narrative to provide her with some comfort, when he gives her a flower:

"It's a Cherokee Rose. The story is, when American soldiers were moving Indians off their land, on the Trail of Tears, the Cherokee mothers were grieving and crying so much because they were losing their little ones along the way. Exposure, disease, starvation. A lot of them just disappeared. So the elders, they said a prayer, asked for a sign to uplift the mothers' spirits, give 'em strength, hope. The next day, this rose started to grow, right where the mothers' tears fell. I'm not fool enough to think that there's any flowers blooming for my brother, but I believe this one bloomed for your little girl."

Darryl continues to be one of the more interesting and likable characters to me, and I'm starting to wish he had more to do. In fact, it's an issue with this show that I like all of the supporting characters more than I like our three supposed leads: I find I get bored whenever Rick, Lori, or Shane are on-screen. (The episode ends with the revelation that Lori is pregnant: we're clearly supposed to wonder Shane or Rick is the father, but I just don't care: none of the three sides of this triangle are particularly interesting to me.) Part of the problem is that all three are so dour and joyless: we see other characters have moments of friendship and humor—the Glenn and Maggie scenes are a good example—but the supposed leads remain one-note characters, and the notes are dull and monotonous and depressing. I'm tired of Rick's noble bearing of his responsibilities; I'm tired of Shane's bitter and angry attitude; I'm tired of that pinched, worried look on Lori's face.

It's probably too much to hope that all three become zombie fodder, but I'm a little encouraged to see the rest of the ensemble getting more to do, and I hope the show continues to move in that direction. 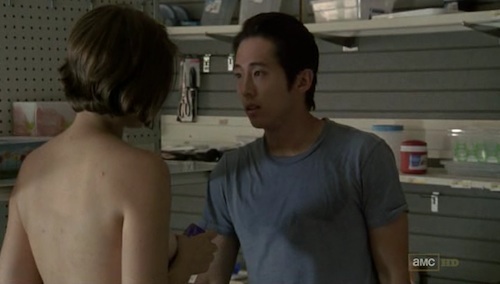