Like the characters in Camus' novel, our intrepid band of survivors are living through a pestilence that threatens to destroy them all; each of them is having to find his or her own way of dealing with the threat of imminent death; each is trying to find a way to live in a world without order; and each is trying to find meaning in the apparent absence of God.

This week is all about one obvious, existential question: what's the point?

"And, truth to tell, nothing was more important on earth than a child's suffering, the horror it inspires in us, and the reasons we must find to account for it. In other manifestations of life God made things easy for us…But in this respect He put us, so to speak, with our backs to the wall." —from The Plague, by Albert Camus

What's the point of living, of fighting a losing fight, of struggling to survive? That's the question Lori (Sarah Wayne Callies) asks this episode, but it's basically the same question Andrea (Laurie Holden) has been asking since her sister died, and it really began back in Season One when Jenner (Noah Emmerich) and Jacqui (Jeryl Prescott) decided to stay and die at the CDC. As I said in my initial review this season, hope is hard to come by in a zombie apocalypse, and faith harder still: you're outnumbered, you're running constantly, and it's only a matter of time before you find yourself becoming a delicious serving of human tartare.

So Lori is flirting with the idea that maybe her son is better off dead. How, she asks Rick, can we ask a child to live and suffer through a world like this? (It's a seemingly radical turn-around from last episode—and doesn't make an already unlikable character much more sympathetic—but it's also understandable: surely everyone has a breaking point, and surely none of these characters can be too far from theirs.) Carl is the subject on the table (literally), but really Lori is asking the question for herself: why should I keep living? She says she envies Jacqui's being at peace, and she pleads with Rick (Andrew Lincoln): "Tell me why it would be better the other way." At first, he doesn't have an answer for her.

Rick is a very existential, Camusian hero in many ways: he doesn't see anything heroic or noble in surviving, but he keeps doing it, and helping others do it, because that's just what one does: it's the only way he knows to live. One of Camus' characters says that the only way to fight a plague is with "common decency," and Rick is an unfailingly decent man.  No matter how unlikely it is that he and his loved ones will achieve a happy ending, he still needs to act as though there is hope to sustain himself. And, however doomed they are, he recognizes that there are still moments of beauty, even if only brief moments that are doomed to pass:

"We were standing there in the woods, and this deer just crossed right in front of us. I swear, it just planted itself there, and looked Carl right in the eye. And I looked at Carl, looking at that deer, and that deer looking right back at Carl, and that moment just…slipped away. And that's what he was talking about when he woke up: not about getting shot, or what happened at the church. He talked about something beautiful, something living. There's still a life for us, a place, maybe like this. We need to be strong enough after everything we've seen to believe that, even after all of this."Why is it better for Carl to live, even in this world? He talked about the deer, Lori. He talked about the deer." 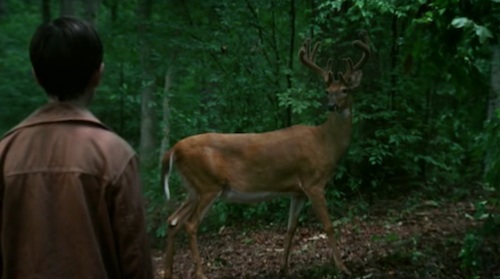 "It is in the thick of calamity that one gets hardened to the truth—in other words, to silence." — from The Plague

Glenn (Steven Yeun), too, is looking for answers, and—as Rick did in the season premiere—takes an amateurish, desperate stab at prayer. Maggie (Lauren Cohan) interrupts him in the effort, and expresses doubts about the existence of God—something she says she always took on faith before. "Everything that's happened, there must have been quite a lot of praying going on," Maggie tells Glenn. "Seems like quite a few have gone unanswered." She doesn't dissuade Glenn from praying, exactly, but she states what I am increasingly sure is the philosophical position of the show as a whole: "Feel free to believe in God," she says, "but the thing is, you gotta make it okay somehow, no matter what happens." 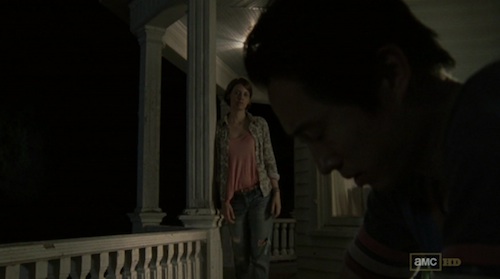 Maggie is suggesting that existential idea that—absent an external force or morality—we must find meaning for ourselves, in our own actions. For Glenn, what that translates to is friendship, and community: reaching out to Maggie as she reached out to him, and offering to share her grief. "You told me I had to make it okay for myself," he says, and asks her to tell him about the people she's lost.

"There is but one truly serious philosophical problem and that is suicide. Judging whether life is or is not worth living amounts to answering the fundamental question of philosophy." —from "The Myth of Sisyphus,"by Albert Camus

Andrea is still struggling to make it okay for herself after the death of her sister, and after Dale (Jeffrey DeMunn) forced her to abandon her own plans for suicide. This week—in my absolute favorite scene of the show so far—she and Darryl (Norman Reedus) are still searching for poor, missing Sophia, and come across a walker hanging from a tree. His suicide note is short and sassy:

Got bit,
Fever hit,
World gone to shit,
Might as well quit. 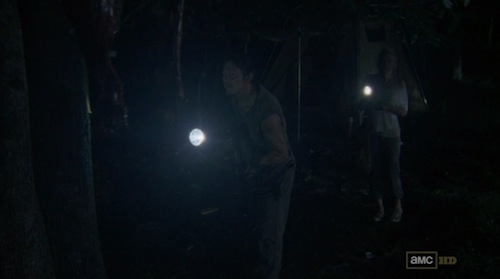 The walker, however, is still struggling in his noose: other walkers have eaten all the flesh off his feet, but still he writhes and grasps in a theoretically eternal nightmare of mindless, pointless purpose. As a metaphor for hopeless, Sisyphean existence, he's kind of depressing, but as Camus writes, "The struggle itself towards the heights is enough to fill a man's heart. We must imagine Sisyphus happy."

Darryl is all for leaving the poor bastard to his eternal struggle—he doesn't see the point of wasting an arrow–but Andrea knows about the longing for suicide, and she is also—like Rick—a decent human being. When Darryl asks her if she still wants to live, she says she'll give him "an answer for an arrow," and so helps the walker achieve the peace she has denied herself. Her answer, however, is existentially ambiguous, and shows that she's still struggling with the question: "I don't know if I want to live, or if I have to, or if it's just a habit." It is, as Darryl says, "not much of an answer," but it's all she's got—and she hasn't given up yet.

Later in the episode she's rewarded with control over her own existence, as Dale gives her her gun back. He asks her if she's forgiven him yet for making her live, and she says she's trying: sometimes the struggle is enough.

"I don't believe in heroism. I know it's easy, and I've learned it can be murderous." —from The Plague 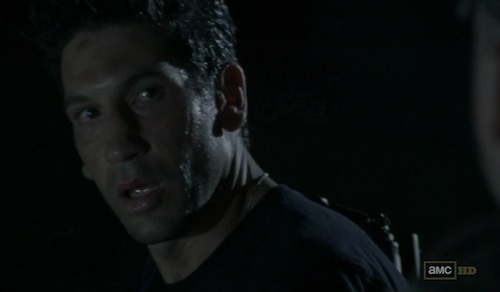 "If nothing we do matters, then the only thing that matters is what we do." (OK, you caught me, that's not Camus: it's contemporary philosopher Joss Whedon, who should adapt The Plague as an online musical.) But if Maggie is right, and if every person has to make it okay for themselves, and find a way to live that they can live with, then Shane (Jon Bernthal) is kind of fucked. He commits a serious existential party foul this week: after Otis (Pruitt Taylor Vince) saves his life, and refuses to leave him behind, Shane turns around and sacrifices Otis just to stall the walkers and make his escape. To his credit, Shane is trying to save Carl's life—his motives are not entirely selfish—but that action is unforgivable. Shane—driven by guilt to be the hero—does something that is not okay, and he knows it, and this episode begins and ends with his scourging of himself in shame.

"But what does that mean—‘plague’? Just life, no more than that." —from The Plague

Forgive all my tongue-in-cheek references to Camus—and my incredibly shallow nods towards existentialism—but I've been trying really hard to like The Walking Dead ever since it premiered, and this idea has given me a lens through which to view it more favorably. Camus used the idea of a plague to explore some essential questions that become crystallized and concentrated by calamity, and in his survivors found a variety of different viewpoints and philosophies to explore. This may sound a bit heavy for a zombie show, but a zombie apocalypse is every bit as good as a plague for bringing those issues into focus. (Better, in fact, since the "living dead" really throw a wrench into most religious belief systems.)

We all may wonder what the point of living is, or whether we should bring children into "a world like this," and a story like this can be a great vehicle for exploring those questions. The conversations this week between Rick and Lori, between Glenn and Maggie, between Darryl and Andrea, are the sorts of conversations that could only happen on a show like The Walking Dead, and I'm happy to see the show embracing the unique dramatic possibilities and thematic potentials of its premise. I'm beginning to see, that is, the point of the show, and its reason for existing.