The zombie movie has always been among the bleakest and most spiritually hopeless of genres: I mean, once the dead start getting up and eating the living, what exactly is there left to pray for? At that point you pretty much have confirmation that there's no order to the universe, no hope of Heaven, no vision of eternal life that doesn't involve shambling and grunting and getting brain-lobes caught in your beard. Zombies mean chaos; zombies mean hopelessness; zombies mean Game Over. You may be alive now, but you're outnumbered, you're living in the final days, you're running out of ammo, and you're always one mistake away from being people-pâté.

The best part? It's only gonna get worse.

I think this overwhelming sense of futility is one of the reasons—though there are others—that I've found myself feeling lukewarm about The Walking Dead. The show is well-made, and can deliver scenes of incredible tension and dread: this week's opening 20 minutes—as the survivors cringe beneath cars on the highway while a "herd" of zombies pass by—is probably as nail-biting a sequence as the small screen can deliver.

(Side-note: isn't the accepted collective noun a "shamble" of zombies? Well, if it isn't, it should be.) 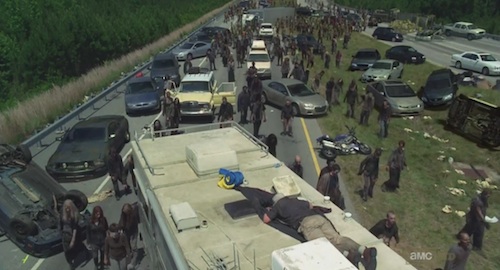 The Walking Dead had a strong (and short) first season, but—despite gripping scenes like this one—I have found it a hard show to invest in because I just don't see where it can ultimately go. Zombies are a situation, not a plot; a world overrun by zombies is a setting, not a story. I mean, you can tell a story about survival, but that gets tiresome quickly: imagine if Jurassic Park were an ongoing series, with the characters just constantly running from dinosaurs without even having the option to escape the raptor-ridden island. (Oh, wait, you don't have to.) The Walking Dead has state-of-the-art zombie effects, but by the second or third episode I was already tired of seeing the characters fight and escape the hordes. If you've seen one group of humans disguise themselves in human viscera to wander unmolested through a zombie mob, you've seen ’em all.

(I mean, Zombie Train is a really cool show, but have you noticed they never get anywhere? They just keep zombie-training.)

Another issue is that zombies don't generate any further possibilities. Most sci-fi and horror shows like The Walking Dead live and die (no pun intended) by their mythologies: there are always artifacts to gather, prophecies to thwart, evil schemes to foil, conspiracies to untangle. Here, there's nothing: no secrets to uncover, no zombie mastermind to unmask, no diabolical agenda to discover. Grrr…Argh: That's what these bad guys bring to the table. None of them will ever drive the plot, let alone be the character-we-love-to-hate, the villain-seeking-redemption, or the monster-with-a-heart-of-gold. (Even Buffy the Vampire Slayer knew that the show needed Buffy to do more than just slay vampires from week to week.) 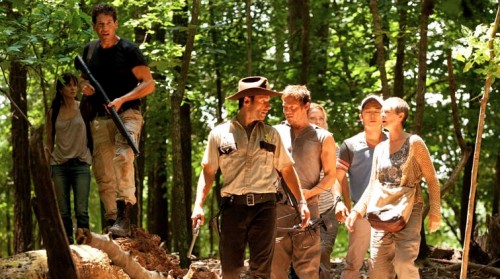 What that means is that The Walking Dead must treat its zombies as what they are: a purely environmental threat. The show is effectively a wartime drama, with the dangerous environment heightening the stakes but not providing the story. The show has to live and die (pun intended, this time) with its humans, and this was where I found the series most lacking in Season One: these characters are simply not—yet—intriguing enough to sustain our interest. We don't know enough about who these character were before, and the show is not providing the kinds of interactions and subplots that would show us who they are now. The secret of the relationship between Shane (John Bernthal) and Lori (Sarah Wayne Callies), for example, began as a promising narrative time-bomb, but it's only succeeded in making both characters less likable. Rick, our central character, is too dully decent to be fascinating. (Of the current characters, the one who seems to have the most layers—and therefore the most promise—is Darryl [Norman Reedus].)

But Season Two has a strong foundation to build on, and plenty of time left to develop its current characters and introduce new ones. Still, the show has a lot of work to do to convince me that The Walking Dead has legs. (Get it? Legs…walking…Never mind.) 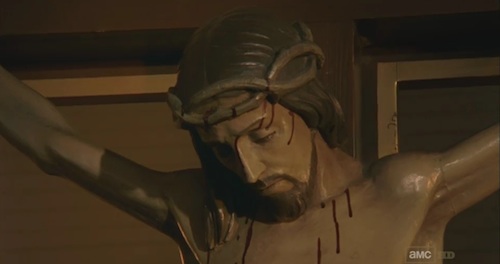 What I do kind of like about The Walking Dead is its willingness to be so irredeemably bleak. "What Lies Ahead," the first episode of the new season, certainly doesn't do much to suggest the show's worldview is going to get any cheerier. As the episode opens, we hear the voice of Rick Grimes (Andrew Lincoln) over scenes of desolation. "I guess I'm losing hope that you can hear me, but there's always that chance, isn't there?" Rick says. He is, we discover, sending a futile message out to Morgan, the man who saved his life way back in the series premiere—but the words carry an obvious suggestion of prayer, a lamentation to a God who seems to have all but abandoned the Earth.

Rick goes on to talk about Jacqui (Jeryl Prescott), the survivor who decided to stay inside the CDC when it blew all to hell in the Season One finale. Rick says Jacqui "lost faith," but who can blame her? These handfuls of humans scrabbling through the wasteland of this undead-apocalypse are not having a good time here, and after the CDC turned out to be as miserable as everywhere else, there isn't much hope left. Later in the episode, Andrea (Laurie Holden) picks up the idea: she wanted to stay behind and die with Jacqui, and here she chastises kindly Dale (Jeffrey DeMunn) for forcing her to live. "All I wanted…was to get out of this endless, horrific nightmare we live every day."

The absence of hope—and specifically the absence of God—runs throughout this episode. After Sophia (Madison Lintz) disappears, the search party is about ready to give up when they hear church bells ringing—an apparent deus ex machina offering a sign of salvation. Unfortunately, the church bells turn out to have been on a timer—a meaningless, non-directed noise—and the only penitents in the church turn out to be Walkers. (The fact that the mindless zombies have gathered in the church could be read a couple of ways—as either an expression of, or an indictment of, faith—but I suspect the darker interpretation is intended, and that the show doesn't put much stock in religion. The only character who expresses actual faith is Sophia's mother Carol [Melissa Suzanne McBride], and she has a dark view of Christianity in which she's convinced she's being punished for her sins—a troubling, self-hating relationship with her God that echoes her relationship to her late, abusive husband.)

Rick, of course, also prays in the church—mostly out of desperation, admitting that he's not much of a believer—and he asks for a sign, any sign, to give him hope. A few minutes later, in the episode's final scene, he seems to get it, when a deer appears in the woods. Here the show's bleak sensibility shows itself most clearly: Rick, Shane, and Rick's son Carl (Chandler Riggs) treat the deer's appearance as a magical moment of pure happiness—which it is, right until the moment when a shot rings out and a bullet blasts through the deer and child both. 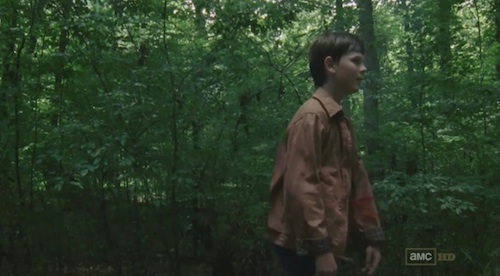 I go back and forth on whether I really want The Walking Dead to introduce some kind of over-arching mythology—like Lost, for example—to keep me more interested. I think it would help make the show more than Zombie Escape of the Week, but I also recognize that it would be introducing a sense of narrative order—“There's a purpose to it all!"—that might run counter to the honest, indifferent chaos that may the best thing the show has going for it. Maybe it doesn't make sense; maybe there isn't, and shouldn't be, a meaning to it all. Maybe the lack of meaning is the meaning, and our only hope is to find purpose in existential survival. That's an interesting notion, and unique on television: if The Walking Dead can find a way to make me care about its characters—and find a way to tell different, more complicated stories against this zombie-wasteland backdrop—this bleak philosophy could make it a show worth watching for more than its scares, fights, and undead vivisections.

I'm willing to stick with it for now. See you next week.