Every time I think I'm starting to get on board with this show, an episode comes along that reminds me just how much I don't care about any of these characters. "Bloodletting" is a serious step backwards for The Walking Dead after last week's more promising season premiere: it's an episode that underlines all of the show's weaknesses without offering anything new that might be encouraging.

I am increasingly convinced that the show's writers—in this case, Glen Mazzara—simply don't know how to develop characters. I was thrilled, for example, to see the episode open with a flashback to the pre-plague era, with Lori (Sarah Wayne Callies) discussing her marital problems with a friend. The Walking Dead has been reticent about showing us anything about these characters from before the zombie apocalypse, and I think that's a huge mistake: the occasional Lost-style flashback would go a long ways towards fleshing out who these people are and why we should care about them. 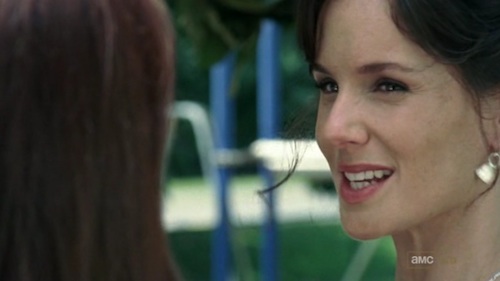 Here, however, the opportunity is wholly wasted: about their marriage we discover absolutely nothing except that Lori—perhaps speaking for the audience—gets frustrated with Rick for being boring and decent. Yes, there's a parallel: we see Lori get the news about Rick's being shot, as later in the episode we'll see her get the news that her son has been shot. But so what? What on earth does this scene accomplish except to consume three minutes of screen time?

The rest of the episode continues to undermine my confidence in the writing. It is extraordinarily poor plotting, for example, that the moment Carl (Chandler Riggs) is shot, the guy who shot him (the always welcome Pruitt Taylor Vince) happens to know exactly where to find the first doctor the survivors have seen since Rising Dead Day. (Okay, the doctor [Scott Wilson] turns out to really be a veterinarian, but he has IVs and surgical equipment and a magical ability to determine—without an X-ray!—the exact number and location of bullet fragments lodged within Carl's body. I'm going to go ahead and call him a doctor.) 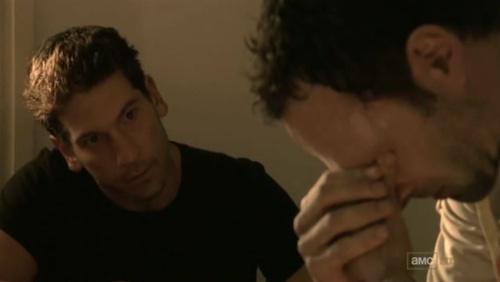 I'm willing to excuse that kind of contrivance in the plotting. (I'm not willing to resist pointing it out and crapping on it, obviously, but I'm willing to excuse it.) But the larger problem is with the characterization. I feel like the writers are aware of their character problems, and are trying to respond, but have no idea what to do. Virtually nothing happens this episode except the characters interacting with one another: Rick, Shane (John Bernthal), and Lori in the house; Dale (Jeffrey DeMunn) and T-Dog (IronE Singleton) on the highway; and the rest of the Scooby Gang out in the woods. Like the idea of doing flashbacks, spending an entire episode standing around gabbing is actually a good idea for this show right now; unfortunately, like with the flashback, it's completely wasted, and brings nothing new to the table. The scenes, for example, between Rick and Lori, or Rick and Shane, do not explain, expand, or advance their relationships at all. Andrea (Laurie Holden) is still being traumatized about her sister and bitter towards Dale, but not much is added to the bitching-out she gave him last week. (Though it wouldn't entirely surprise me if we're heading towards an unlikely romantic relationship between these two.)

Darryl (Norman Reedus) continues to be the character I find most interesting: this racist redneck is looking more and more like a stealth hero, and he gets the best line of the episode, while reinforcing the secular agenda I speculated about last week: "It's a waste of time, all this hopin' and prayin'," he says. "Am I the only one zen around here?" 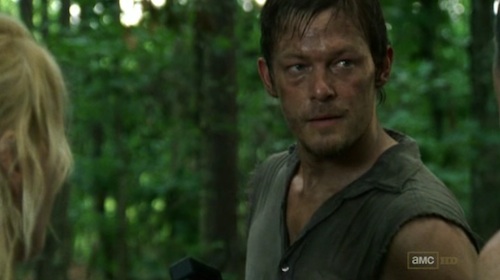 After all this standing around—because this is The Walking Dead, after all—the writers fall back on their most reliable (and, at this point, most tiresome) plot device: finding an excuse for a zombie standoff. In this case, Shane and Otis have to go get medical supplies to save Carl's life, and—since they seemingly had no plan of any kind—get trapped by an overwhelming horde of walkers, leading to a cliffhanger that is pretty much robbed of all suspense by sheer repetition.

I keep thinking about a BBC series called Survivors (2008) that was more like what I wish The Walking Dead could be. The show focused on a similarly small group of…well, survivors….after a plague had wiped out 99 percent of the human race. While far from perfect, the show found drama in its rich characters, their interactions, and the power struggles they encountered—both internally and externally—as they struggled to form a community in this barren new world. It managed to make me care about this small group of accidentally-connected people, and it also managed to be consistently more interesting and suspenseful than The Walking Dead, and it did it without any zombies.

The writing staff of The Walking Dead could spend a few valuable hours watching that underrated little series (it's streaming on Netflix). I may go rewatch it myself, because right now, The Walking Dead is kind of making me root for the zombies.