I suspect this will be the shortest review I've ever written, because I really only have one thing to say about this episode:

FOR THE LOVE OF GOD, CAN WE PLEASE GET OFF THIS GODDAMNED FARM ALREADY?

Seriously: given a choice between being bored to death on Hershel's Farm, or taking my chance as free-range zombie food, I think I'd take the latter. This is our fifth straight episode that finds the majority of our principles just sitting around a quiet farmhouse, mostly doing nothing except cooking dinner and taking target practice. The worst thing is, all of this relatively safe downtime has not translated into character development for most of the characters. With the exception of Daryl (Norman Reedus), Glenn (Steven Yeun), and Maggie (Lauren Cohan), I don't feel any closer to these people—or like them any more—than I did when the season began.

"Secrets" strikes me as the most unnecessary episode of The Walking Dead to date, serving no purpose except to let the characters know things that the audience already knew. We don't learn anything this episode. Rick (Andrew Lincoln) learns that Lori (Sarah Wayne Callies) is pregnant, and that she had an affair with Shane (Jon Bernthal). Dale learns—or at least suspects—that Shane lied about how Otis died. And Glenn and Dale learn that Herhsel (Scott Wilson) is keeping walkers in the barn, because he still thinks of his shambling family members and neighbors as "people."

And what are the ramifications of all these revelations? There are none. Glenn and Dale (Jeffrey DeMunn)—implausibly—agree to say nothing about to the others about the walkers in the barn, obviously saving that inevitable clusterfuck for next week's mid-season finale. The pregnancy story leads to a long diversion, in which Glenn and Maggie are sent into town for abortion pills, which Lori then takes, and then promptly throws up. This all happens just so Lori can cover the same "how can we raise a child in this world" ground that was well covered two weeks ago in "Save the Last One," and so—like the zombie-in-a-well subplot—this turns out to be just a long, pointless narrative cul-de-sac that risks lives unnecessarily—as Maggie rightly points out—and goes nowhere. It's like the show is just killing time, which is the last thing a show this slow needs to be doing. 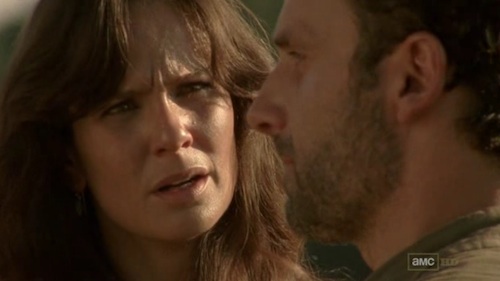 Similarly, the secret about Lori and Shane has been festering for all 12 episodes of the series so far, and yet still can't inspire an interesting conversation between Lori and Rick, let alone provide any dramatic payoff. Rick has the only reaction he could possibly have: "I know," he says. "Of course I know. The world went to shit and you thought I was dead." And that's the end of it: it's as though the writers just admitted that they can't think of anything to do with this storyline, and so don't see any reason to drag it out further. 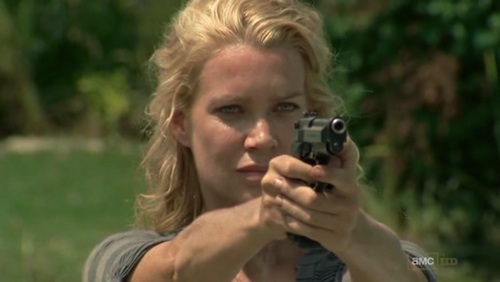 Oh, and Andrea (Laurie Holden) learns to shoot, from the most condescending asshole of an instructor who ever murdered a fat man. Last week I complained about the sexist dis-empowerment of Andrea, and it only gets worse this week: "You shoot like a damn girl," Shane tells her, and then tries to motivate her with the memory of the zombie that ate her sister. Andrea can't just be a good shot; her skills have to be the Pygmalion-like product of Shane's patronizing abuse. What's worse, she appears grateful for his dickishness, rewarding him with a little quickie in the car for helping her to be all that she could be.

I suspected this is where the show was heading between Shane and Andrea, but I so hoped I was wrong. It feels like The Walking Dead has been ambiguous towards Shane—and even wanted us to be sympathetic towards him at times—but I haven't forgotten that Shane not only shot Otis, and considered shooting Rick in the head (as Dale reminds him here), but also tried to rape Lori back at the CDC (which Lori seems to have—unbelievably—forgiven, if she hasn't completely forgotten it). With being an asshole to Andrea, and threatening Dale, Shane is now veering from "unlikable" into full-on villain territory, and the only question is whether he dies next week or whether we save that for the season finale.

I'm not sure I'll be around to find out. I'm here through next week, but that episode will determine whether I bother to return to The Walking Dead after the hiatus. I've never seen a show so badly in need of a new direction; I'm hoping we get it next week, but I'm not holding my breath.