Spider-Man: Homecoming is part of My Summer of Summer Movies, in which I am attempting to see and review every movie that opens (in Chicago) between Memorial Day and Labor Day. Read all about this ill-advised plan here.

When I wrote about Joss Whedon's The Avengers, back in 2012, I discussed how decades of truly crappy comic-book adaptations had systematically lowered our standards. "As a result," I wrote, "comic fans have grown accustomed to seeing the glass as half-full: our expectations are so low that we praise a film when what we really mean is, They didn't fuck that up as badly as they could have." Through the painful nadirs of the '70 and '80s, we suffered through so many low-budget, campy, and cannibalized comic-book projects that films even vaguely faithful to the source material—like Richard Donner's Superman (1978) or Tim Burton's Batman (1986)—could be (and were) mistaken for masterpieces.

I think that overly forgiving mindset still lingers today, though the comic-book fan is living in an undeniable renaissance. This current golden age probably started with Brian Singer's X-Men in 2000, the first modern, big-budget film that took its source material as seriously as the fans did. But it was Sam Raimi's Spider-Man, in 2002, that really battered the door down once and for all. That film grossed over $800 million: more than twice what X-Men had done, and—even adjusting for inflation—more than any previous superhero movie. That was almost certainly the moment studios realized that there was gold in them there tights, and went all-in on superheroes.

But if Sony Pictures' Spider-Man franchise started the wave, it was Marvel Studios that rode that wave to multiplex domination. In the nine years since Iron Man (2008), Marvel has produced a staggering 16 films in its shared Marvel Cinematic Universe (MCU), and nearly all of them have been runaway hits. The MCU is such an unstoppable juggernaut that a middling threequel like Iron Man 3 (2013) can do more than a billion dollars in business worldwide, and even an obscure character like Ant Man is good for $500 million or so.

My point is, it's far past time that we got over being gratefully relieved that a superhero movie isn't terrible. Comic-book adaptations aren't the unloved, redheaded-stepchildren of the movie industry anymore: they are the movie industry. (Last year, Captain America: Civil War was the highest grossing movie worldwide, and there were five other comic-book adaptations in the top twenty.)

I'm thinking about all of this today because I am trying to reconcile what seems to be universal praise for Spider-Man: Homecoming with my own, slightly more tepid response. (I don't read other critics' reviews before I write my own, but it didn't take more than a few minutes on Twitter to realize that I was going to be in the minority on this one.) And the only explanation I can come up with is that we're still grading superhero movies on a much lower curve than we should.

As a Spider-Man fan from way back, I would love to join the general consensus and report that Spider-Man: Homecoming is the live-action version of my favorite character that I've waited for all my life. I hoped to be able to say that. I wanted to say that. I even expected to be able to say that, since I was as relieved as anyone to see the reliable Marvel Studios finally strike a deal with Sony to bring its flagship character home to the MCU where he belongs. Marvel introduced Tom Holland's version of the character—to surprising, crowd-pleasing success—in last year's Captain America: Civil War, and it was hard not to get excited about his first solo-outing.

But, sadly, I can't quite gush in fanboy glee. Directed by Jon Watts, Spider-Man: Homecoming is…okay. It's fine. It has its charms. (It may, in fact, have too many charms: like its protagonist, Homecoming is as eager to please as a hyperactive puppy. And I'm going to feel kind of bad for kicking it like one.)

Credit where credit is due, there's a lot that Homecoming does right—starting with the decision not to retell the origin story again. (Personally, I was sick to death of seeing unimaginatively reimagined versions of the famous radioactive-spider-bite, and would not have been able to sit through another rendition of Uncle Ben's folksy wisdom and tragic murder.) Spider-Man: Homecoming picks up shortly after the events of Civil War, in which Tony Stark (Robert Downey, Jr.) recruited the teen-age hero to join The Avengers in their fight against Captain America and his fellow renegades. (In one of the more delightful early sequences of Homecoming, these events are recounted in Peter Parker's squeeing video-diary.) Now, Stark returns Peter to the Queens home he shares with his widowed (but still—as everyone she encounters mentions—hot) Aunt May (Marisa Tomei). Peter is anxious for more adventures with the Avengers, but Stark tells him he's not ready and instructs him to lay low and be a "friendly neighborhood Spider-Man" for a while.

Which he does, in suitably small-time, and fairly disastrous, fashion. Trying desperately to prove himself to his reluctant mentor Stark, the 15-year-old Peter fights crime more or less exactly as a 15-year-old superhero would fight crime: haphazardly, naively, and—quite often—badly. (He can catch a bike thief, but then he has no idea how to return the bike to its owner; he ends up leaving it on the street with a note, no doubt to get stolen again. Later, he rather brutally assaults a guy breaking into his own car.) When Peter finally stumbles upon some real criminals—bank robbers wielding high-powered alien weaponry, acquired from embittered arms dealer Adrian "The Vulture" Toomes (Michael Keaton)—he's clearly in over his head, and its arguable whether his actions make the situation better or worse. 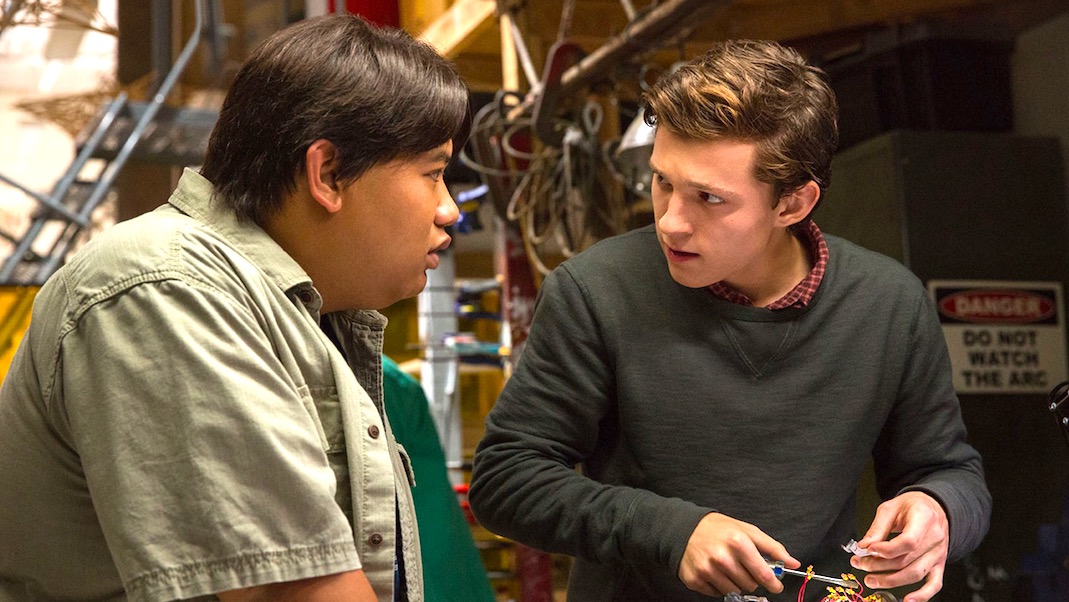 Peter juggles his double-life as badly as the average teen-age boy would do, too, accidentally revealing his dual-identity to his best friend Ned (scene-stealing newcomer Jacob Batalon), and flailing when he tries to balance the demands of normal high-school activities—and his crush on pretty, popular girl Liz (Laura Harrier)—with the more thrilling temptations of super-heroics. What made Peter Parker unique among comic-book superheroes—and what made him such a fan favorite—was that he was a geeky, insecure high-school student, always struggling with school problems, girl problems, and money problems. Marvel was smart to emphasize the high-school drama in Spider-Man: Homecoming, and Holland—very likably, and very amusingly—embodies the plucky immaturity of the character better than either of his predecessors did. Easily the most light-hearted of any of the Spider-Man films—or of the MCU films, for that matter—Homecoming often feels like a teen comedy that happens to be about a superhero, rather than a film about a superhero who happens to be a teen-ager.

But important things are sacrificed at both ends of this equation, to the detriment of the film. As an action-movie, Spider-Man: Homecoming is perhaps the least satisfying entry in the MCU so far. Director Jon Watts previous feature Cop Car (2015) was a delightfully tense, small-scale thriller, but he was an odd—and, to my mind, poor—choice for Marvel to bet on for its flagship character. The simple, street-level fight scenes in Homecoming are passable, but the larger they get the messier, more chaotic, and less imaginative the storytelling becomes. This version of Spider-Man made his debut in Civil War's dizzyingly inventive airport battle, and Homecoming's fight scenes—both in terms of overall choreography, and in terms of the use of the character—pale sadly in comparison. (In general, Homecoming doesn't seem to know how to use Spider-Man's powers and fighting style, and relies far too much on recycling bits of Iron Man by giving him a high-tech, artificially-intelligent suit.) The comic-book aspects of the plot, too, leave a lot to be desired: Keaton is predictably solid as the adversary, but the arms-dealing plot never achieves any serious stakes, and Peter Parker's evolution as a superhero never finds a satisfying, transformative arc. Nothing about this film achieves any narrative momentum, and it certainly never arrives at anything that feels—as we expect these films to feel—epic or exhilarating. 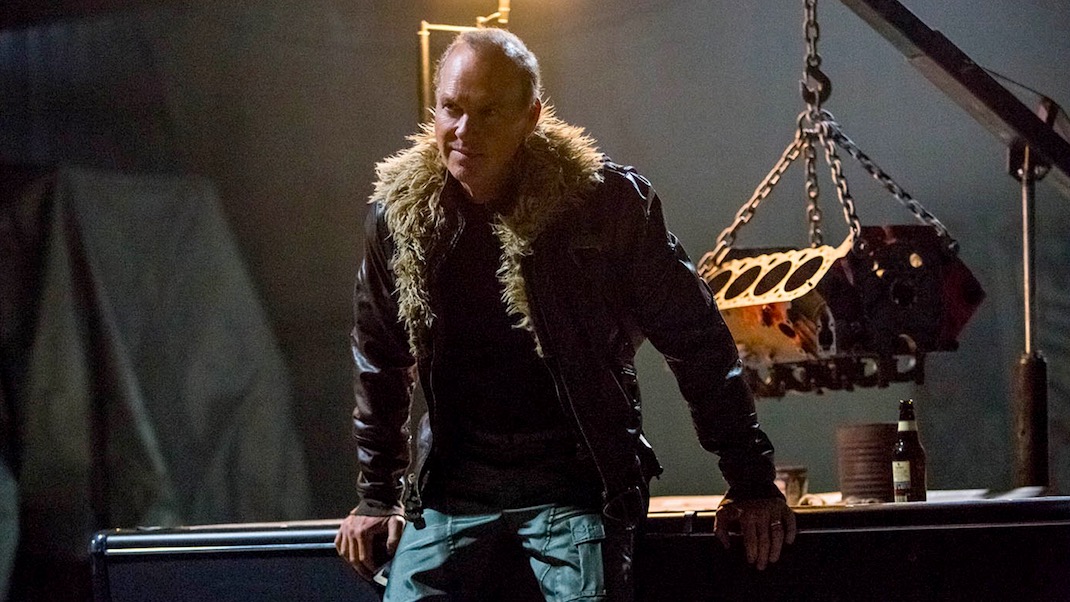 It could be argued, I suppose, that this was intentional—to keep the scale small, and focus more on Peter Parker than on Spider-Man—but I actually think Spider-Man: Homecoming fails its human side almost as badly, once we look past the amusingly diverting surface. To distinguish itself from the previous films, Homecoming omits Peter's guilt-ridden angst about Uncle Ben's death, and reduces Peter's love life to a passing infatuation with an underwritten pretty girl. These are understandable decisions, but, without those two aspects, Homecoming ends up having no real emotional content at all. Holland is charmingly goofy, but that's all he ever manages to become: lacking most of the comic character's pathos, he ends up having even less emotional depth than Paul Rudd's flippant burglar in Ant Man (who at least had a vague redemption story, and an adorably cute daughter, to anchor his character). Making a John Hughes movie about Peter Parker isn't the worst idea in the world, but Watts and the army of screenwriters seemed to have missed the part where John Hughes movies—to say nothing of Spider-Man comics–actually explored the genuine psychological trauma of being a teen-ager. (At least a couple of people involved should know better: both co-screenwriter John Francis Daley and co-star Martin Starr—who plays Peter's Academic Decathlon coach—are veterans of Freaks and Geeks. If Homecoming had even a fraction of that show's authenticity about the hell of high school, I'd like it a lot better.)

I don't want to be too hard on Spider-Man: Homecoming. It's a passably enjoyable, aggressively good-natured couple of hours, and there are plenty of geeky easter eggs for the hardcore fans to enjoy. Some of them are for old-school fans, like the subtle costume touches on the civilian clothes of The Vulture and his chief henchman, The Shocker (Bokeem Woodbine). Some of them are for devotees of the MCU, like the identity of Peter's high-school principal, and a very funny series of classroom educational films starring Chris Evans' Captain America. Others can be considered efforts to tease—or troll—those of us who would have preferred Marvel to give this third incarnation of Peter Parker a pass and focus instead on Miles Morales, the African-American/Hispanic Spider-Man from the comics. (Miles' Uncle Aaron—played by Donald Glover, who once wanted to play Miles himself—turns up here in a funny scene, and Ned is Miles' friend Ganke in everything but name.) And there's plenty of groundwork laid for the inevitable sequels, including hints that Peter's deadpan, socially-conscious classmate Michelle (Zendaya) will have a much bigger role in future installments of the Peter-Parker story.

But overall I found Spider-Man: Homecoming sadly underwhelming, and puzzlingly generic. Light-hearted is fine, but this is light to the point of flimsiness: it lacks even the dubious narrative and thematic integrity of the other Marvel movies, and doesn't provide anywhere near as much imagination, spectacle, or fun. Haven't we reached a point where we should expect more from superhero movies than this? Just this year, Wonder Woman provided much more in the way of genuine thrills, and Logan proved that the genre can actually sustain a serious movie. I think I'm just long over being relieved when a comic-book adaptation isn't blatantly, laughably horrible. Superheroes are now the unquestioned alpha-dogs of the movie industry, and Marvel is the unquestioned alpha-dog of superhero movies. With such great power should come the great responsibility to produce actual, substantial movies: simply being "good enough" is no longer good enough.