In my review of James Mangold's The Wolverine (2013)—the previous solo outing for Hugh Jackman's titular Canadian mutant—I reported that the film was just good enough to make us wish that it had been better. "With a slower pace, a smaller scale, and a more intimate focus than most comparable superhero franchise films," I wrote, "The Wolverine succeeds for a surprising portion of its running time in making us hope that someone has actually been allowed to make a serious movie from these pulpy comic book ingredients." Alas, that film's considerable potential was eventually suffocated under ridiculously over-the-top (but curiously bloodless) fight scenes, and silly, CGI-saturated set-pieces that just reeked of studio interference. It felt as if Mangold and Jackman had nobly tried—but ultimately failed—to claw their way out of the four-colored, panel-guttered limitations of the standard comic book movie.

But the thwarted promise of The Wolverine is realized, without compromise, in the terrifically brutal Logan, the latest—and, to all indications, last—solo outing for Jackman's character. It has been widely reported that Jackman took a pay-cut to guarantee the film's R-rating—a rating that it more than earns—and one suspects that there were further negotiations behind the scenes to protect Mangold and Jackman's vision from the studio bean-counters and focus groups. Violent, profane, and existentially bleak, this version of Wolverine is like Marvel Comics by way of Cormac McCarthy, and more Children of Men than "Children of the Atom."

Logan takes place in the year 2029, in a future that is not as unrecognizably dystopian as that glimpsed in X-Men: Days of Future Past. (The question of where—or if—this film fits into the very convoluted timelines of the X-Men movies is almost irrelevant. Logan all but ignores all the other films in the franchise, and Logan himself dismisses the adventures of the X-Men in the comics—and perhaps, by extension, the movies—as colorful, revisionist fictions.) The aging Logan—his mutant healing abilities and adamantium skeleton both beginning to fail him—is holed up in an abandoned smelting plant on the Mexican border, where he and the mutant Caliban (a very good, if unrecognizable Stephen Merchant) are looking after the ailing Professor Xavier (Patrick Stewart). (Xavier is suffering a degenerative neurological disorder: he is prone to seizures, which—in the most powerful mind on the planet—tend to cause psychic earthquakes that debilitate anyone nearby.) Logan is working as a chauffeur, stoically driving spoiled frat boys and bachelorette parties around the American southwest to earn enough money together to keep Xavier in black-market drugs, and perhaps buy a boat to sail them all far away from the things of men. Mutantkind—for reasons that are alluded to, but never really explained—is all but extinct: there has not, as far as Xavier knows, been a new mutant born in 25 years.

Or has there? When a Mexican nurse (Elizabeth Rodriguez) offers Logan $50,000 to escort her and her charge—a silent little girl called Laura (Dafne Keen, a fantastically fierce presence)—safely to North Dakota, it doesn't take long to realize that Laura is a very special child, with more than a few odd similarities to Logan himself. And an army of well-armed, well-financed goons—led by cyborg Donald Pierce (Boyd Holbrook)—seems really interested in getting their hands on her. 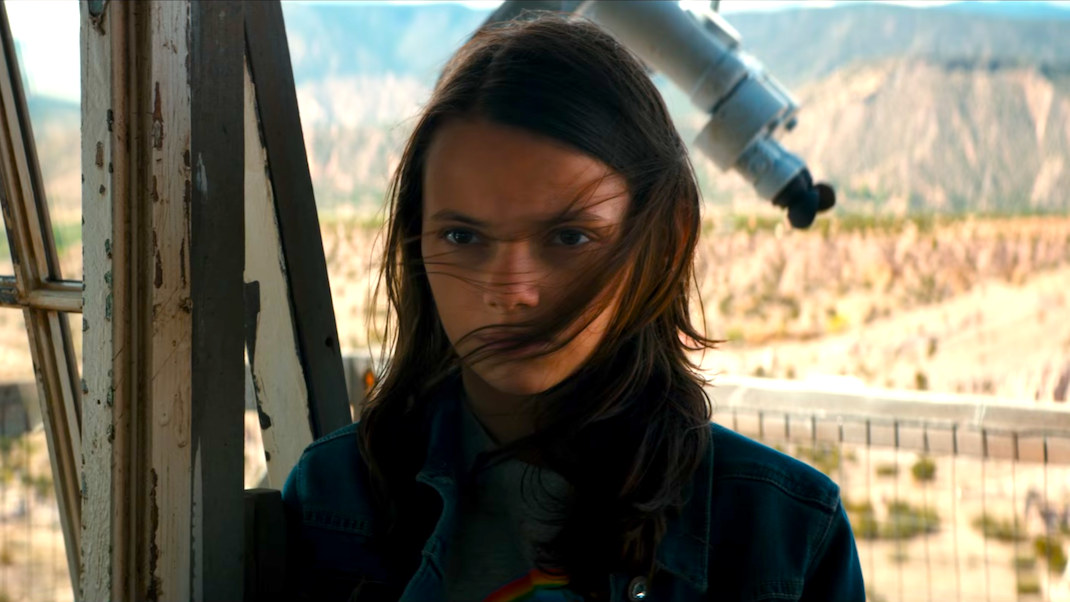 It's something of a cliché to say that super-hero stories are to 21st century entertainment what Westerns were to the 20th, but unpacking that comparison is a useful exercise. Westerns, after all, were never just one thing: the familiar pulp constraints of the genre could encompass everything from wholesome, family-friendly parables about right and wrong, to dark, violent, morally murky explorations of man's inhumanity to man. Mangold, here, blends the superhero and western genres consciously together—George Stevens' 1953 classic Shane is repeatedly referenced—and he is working near the furthest edges of both. Logan is unapologetically brutal, not just in how it allows Wolverine the first cinematic opportunity to use his claws realistically, but also in how it exists in a world where heroes don't always do the right thing, good people don't always get what they deserve, and there are no guarantees that anyone can expect a happy ending. There are moments of stunning, surprising violence in Logan, scenes of genuinely moving sadness, and a bleakness of world view that has been rivaled, within its genre, only by Christopher Nolan's The Dark Knight.

And yet, for all of that, Logan is—unlike, to my mind, The Dark Knight—fun. There is a reliable thread of dark humor weaving its way through the tale, most of it coming from the refreshingly foul-mouthed Prof. Xavier—you can feel the brilliant Stewart reveling in his ability to let loose in this role—and the near feral force of nature that is Dafne Keen's Laura. The action sequences—not always a strong point in Mangold's The Wolverine—are well choreographed, smartly scaled, and wonderfully non-glorified. They are visceral, and they have real stakes, both physical and psychological.

Best of all, this comic-book tale is reliably grounded—as certainly no other X-Men movie has been—in character. For the first time it feels like these characters are set free from the soulless treadmill of preposterous plot, and allowed to exist as people. Jackman's performance is his best and most restrained to date—in any film—as he embodies the decades of violence and loss contained in the painful memories of this inarticulate man. ("There's no living with the killing," we hear Alan Ladd's Shane say, in effective—if on-the-nose—commentary. "There's no going back from it.") Mangold, who wrote the screenplay with Michael Green and Scott Frank, wisely refrains from exposition and big, mawkish speeches, rightfully trusting his stars to carry their arcs as emotional subtext. It is never explicitly stated, for example, that this strange little girl represents the last chance for both Logan and Xavier to salvage some meaning from their lives, and it doesn't need to be. Nor, when Logan is forced to confront a rather literal personification of his own darkest impulses, does Mangold feel the need to spell the psychological and metaphysical implications out for the viewer in the ways a lesser film might: the symbolism is simplistic—appropriate to these archetypal themes—but the film's restraint in commenting on its own device is refreshing and elevating. 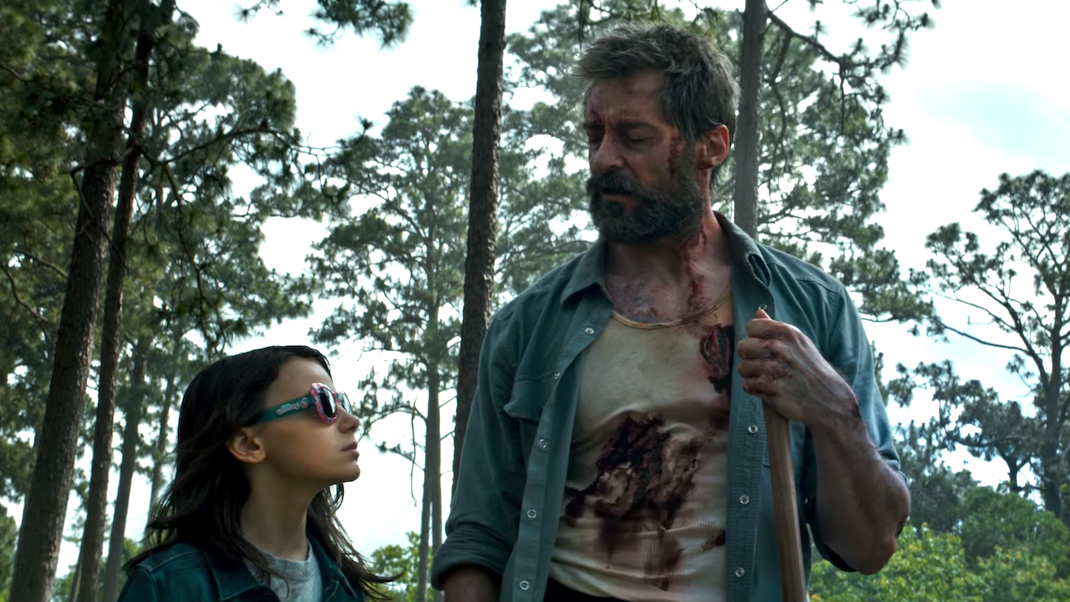 If I can throw yet one more pop-cultural association into the mix, I'll say that what Logan most reminded me of is Naughty Dog's extraordinary video game, The Last of Us. (Normally, comparing a movie to a game is not a compliment—too many action movies can feel exactly like watching someone else play a video game—but these are the exceptions.) There are similarities on the surface level—the two share a similarly bleak, unsentimental tone, and both feature a surrogate father/daughter pair struggling to protect each other through a dangerous landscape—but there are deeper associations as well. The Last of Us was a game that expanded the possibilities of its own genre: it had all the requisite video-game action sequences and logical puzzles, but the gameplay was never the point. At its heart, that game was a storytelling device: a haunting, deeply affecting emotional journey, in which all the shoot-outs and set-pieces were in service of the characters, not the other way around. Logan accomplishes a comparable trick, for it has all the elements of a superhero movie, but it proves that these elements can be assembled, not just for their own sake, but to tell a substantial and moving story about people we can care deeply about.

It would be easy to oversell Logan, and to overvalue it in comparison to its popcorn-movie compatriots. It is not, in the end, an artistic cinematic masterpiece—though, due to our collectively lowered expectations, there are moments when it feels like one. (It is saying things—a rare enough accomplishment for this sort of film—but what it is saying is neither unfamiliar nor particularly profound.) But it is a very good movie, patient, and poignant, and deservedly unembarrassed about its roots. It's the first big-screen superhero treatment to recognize—as Marvel's small-screen Netflix series have begun to do—that superhero stories can handle serious, adult themes and complex emotional characters. It is tempting to say that it transcends the limitations of its genre, but that would be both misleading and demeaning. Rather, Logan reminds us that the very notion of "genre" is ultimately just a vague, almost meaningless distinction of setting, with no inherent limitations. Just as we are not surprised to find Ex Machina on the "sci-fi" shelf beside Star Wars, or No Country for Old Men existing comfortably in the same category as Butch Cassidy and the Sundance Kid, James Mangold reminds us here that it's time we expanded our notions about what a "superhero movie" can be.