Some movies positively reek of studio interference, but with others the cloud of artistic compromise wafts more gently. The Wolverine, the new film from director James Mangold (3:10 to Yuma, Walk the Line), feels at first like a breath of fresh air in this disappointing summer season: with a slower pace, a smaller scale, and a more intimate focus than most comparable superhero franchise films, The Wolverine succeeds for a surprising portion of its running time in making us hope that someone has actually been allowed to make a serious movie from these pulpy comic book ingredients.

Unfortunately, it isn't long before we begin to notice the faint but unmistakable odor of a compromised movie. Is that a rewrite I smell? Has a focus group been here? Do I detect the sour, grubby sweat of a nervous studio executive? Like anyone stuck for several hours in an enclosed space with something slowly going bad, we find the air of corruption harder and harder to ignore, and it begins to overpower whatever other pleasures the film has to offer. By the time we've sat through the disastrous third act, those of us who haven't already been driven from the theater are holding our noses shut, just trying to make it to the inevitable post-credits sequel bait.

After the unwatchable gunk of 2009's X-Men Origins: Wolverine, we had no reasonable expectation that this second solo-outing for the character would be any good at all. But The Wolverine is just good enough to make us wish it had been so much better.

Drawing very loosely from the 1982 Wolverine mini-series by Chris Claremont and Frank Miller, The Wolverine finds Logan (Hugh Jackman) living like a hairy mountain man in the Canadian Rockies, having withdrawn from the world following the death of Jean Grey (Famke Janssen) in X-Men: The Last Stand. (If you are lucky enough to have avoided or forgotten Brett Rattner's misbegotten X-Men movie, fear not: all we need to know about Janssen's character—who appears in dream sequences—is that Logan loved her, and she died.) But Logan's hermitage is interrupted by the arrival of Yukio (promising newcomer Rila Fukushima), a cute and lethal anime-pixie dream girl sent to summon him to the deathbed of Japanese tycoon Yashida (Haruhiko Yamanouchi), a man whose life the immortal Logan saved at Nagasaki. Soon, Logan is embroiled in a multi-front war between Yakuza mobsters, ninja assassins, and the occasional nefarious mutant, while protecting (and romancing) Yashida's beautiful granddaughter Mariko (Tao Okamoto).

None of this is terribly original, and the simplistic fetishizing of Japanese culture is only slightly better than it was in the comic books, but Mangold and screenwriters Mark Bomback and Scott Frank demonstrate a patience and attention to detail that is superior to most comparable action movies. The Japanese characters, for example, are stereotypes, but we get to spend enough time with them—in actual conversations, not just exchanges of catchphrases and exposition—that they feel more authentic and fully realized than the usual live-action cartoons that populate too many movies like this. (Some carefully measured performances help this greatly. Fukishima is a particular standout, and brings some mischievous humanity that slightly elevates her character above its gamer-fantasy tropes. Former model Okamoto, in her first movie role, is also fine, though saddled with a less interesting character: the fact that sidekick Yukio is so much more engaging than actual love-interest Mariko is a bit of a problem the movie never quite solves.) 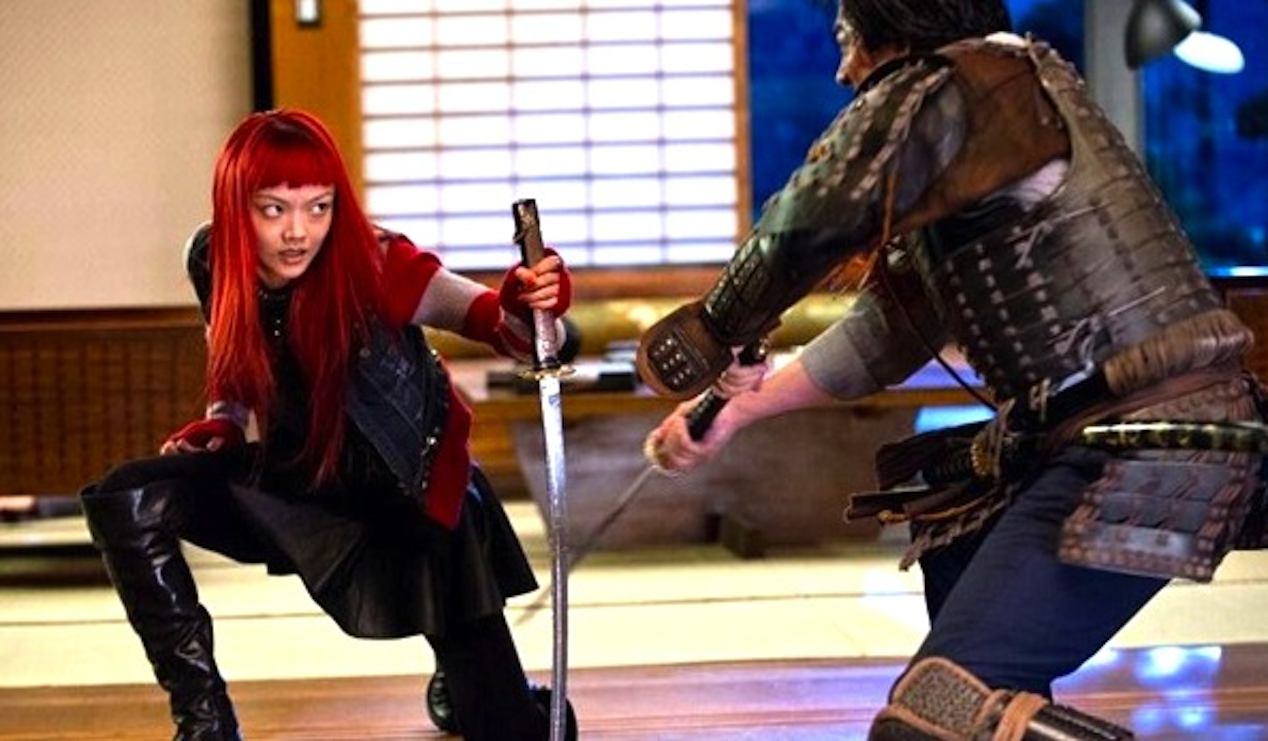 The first half of The Wolverine plays like someone decided to make Skyfall with Wolverine instead of James Bond, which is far from the worst idea someone could have had. Without spoiling anything, the hero's powers are severely weakened early in the film, and so Jackman's Wolverine is weighted down not just with grief and existential angst but with a vulnerability and sense of mortality that makes him more human, and therefore more interesting and accessible. It would be an overstatement to call the movie "realistic," but there is a restraint and a carefully muted approach to the material—and to Jackman's performance—that is admirable. The Wolverine is probably the least self-conscious "superhero" movie yet made: so many such films have a tongue-in-cheek, over-the-top quality that seems to be apologizing for being based on comic books, but Mangold blessedly sets out to make a movie that takes this material seriously without winking at the audience. For the first half of the film—except for the fact that the protagonist has claws—one could be forgiven for forgetting this is a superhero movie at all.

Unfortunately, the film increasingly feels the need to remind us of this, and this is where we begin to feel the tension between where the material wants to go and where the studio bean-counters need it to go. More and more fight scenes and setpieces seem to be thrown in simply for their own sakes, as though the filmmakers have grown concerned that children in the audience might begin nodding off with all the existential angst and interpersonal politics. It's supposed to be a superhero movie! we hear nervous executives yell, and so we get more and more fights and chases that come out of nowhere and serve no purpose. By the time we've reached the disastrously formulaic third act, we are back in full-on stupid blockbuster mode, fighting giant robots and lizard queens in the villain's high-tech lair, and dropping absurd one-liners and catchphrases that each fall with a thunderous thud.

It's a mistake that severely weakens what might have been a very good movie, not least of all because Mangold—though he is very good with quiet scenes, and creates some truly beautiful static images—has very little gift for action sequences. Some of the smaller, one-on-one fights are well-coordinated, but the larger the actions scenes grow, the more Mangold loses control of them. (An elaborate fight scene atop a 300 mph bullet train, for example, is messy, incoherent, and preposterous: I honestly couldn't tell if it willingly disregarded the laws of physics, or if it was just so clumsily executed and edited that we can't follow what is supposed to be happening.) The result is sequences that are loud and stupid without being fun: it's a trade-off of nuance for noise that squanders all the more mature elements the film has patiently layered in, and yet will do little to satisfy the younger and more action-oriented fans.

So the overall feeling The Wolverine provides is a sense of regret for what might have been. Once upon a time, Darren Aronofksy (Requiem for a Dream, The Wrestler) was attached to direct The Wolverine, from a screenplay by Christopher McQuarrie (The Usual Suspects); that movie would, reportedly, have been much more realistic and grounded, making Wolverine the only mutant/supernatural element in the film. (McQuarrie describes it as "Kurosawa's Wolverine.") I haven't read that script—and the studio rewrites were so thorough that McQuarrie receives no writing credit here—but I can't help but wonder if Aronofsky and McQuarrie's vision provides the ghost image of a great film we occasionally glimpse here. As it is, the better movie that The Wolverine might have been now exists only as a palimpsest, a thing of beauty we struggle to make out through the dumber and clumsier elements that have been splattered all over the canvas.