How good is Captain America: Civil War? It's so good that you probably won't mind how bad it is.

If that sounds like a backhanded compliment—well, it is and it isn't. What's true of all movies is doubly true of blockbusters, and triply true of superhero movies: if they're executed well enough, we will forgive all other sins. Out of the box, superhero movies need to be so much fun that we forget we're watching absurdly dressed people do ridiculous things for preposterous reasons. When they are sufficiently entertaining—and Marvel's movies, unique in the field, succeed more often than they fail—we are more than happy to overlook failings like ridiculous plot contrivances, thin-to-the-point-of-nonexistent character motivation, and thematic trainwrecks of attempted moral messaging.

We don't come to superhero movies for art, emotion, or intellectual debate: deep down, we know they are poorly designed delivery systems for such refined delicacies. No, we come to these movies for the goods: just deliver the goods, and we'll go home happy.

Captain America: Civil War delivers the goods, and I went home happily gorged on the pleasures provided by this junk-food bacchanalia. (It was only a few hours later that the inevitable hangover, belly-ache, and self-recrimination set in.)

Picking up after the events of Joss Whedon's overstuffed and oddly joyless Avengers: Age of Ultron, this latest entry in the Marvel franchise finds the entire world suffering from superhero hangover. After destroying much of New York (in The Avengers), Washington D.C. (in Captain America: The Winter Soldier), and the nation of Sokovia (in Ultron), the Avengers have fallen out of favor with the public. When a battle with terrorists goes disastrously wrong in Civil War's opening sequence, the new civilian death-toll proves to be the last straw: the leaders of more than 100 countries sign a treaty, the Sokovia Accords, to rein in the Avengers and bring them under the control of the United Nations.

And thus are battle lines drawn. Iron Man (Robert Downey, Jr.)—guilt-ridden about all the collateral damage, and in a bad place personally—embraces the government oversight as a overdue necessity. Captain America (Chris Evans), however—after the events of The Winter Soldier—is understandably distrustful of government agendas, and refuses to be brought to heel. (The film gets some subtextual pleasure out of the irony of these respective positions: the straitlaced former soldier is refusing to take orders, and the former devil-may-care arms dealer is arguing against the dangers of unchecked power.) Soon, Iron Man is a government stooge, Captain America is a criminal, and nearly everyone in the Marvel Cinematic Universe has taken one side or the other.

Classic comic-book slugfests ensue. These are the goods we have been promised, and they do not disappoint. Directors Anthony and Joe Russo, as they proved in The Winter Soldier, have a real gift with action, and Civil War contains some of the best in any superhero film so far. Close-quarter hand-to-hand combat sequences segue into thrilling chase scenes, chase scenes segue to building-destroying brawls, and all of it plays out flawlessly with remarkably clean and comprehensible visual storytelling. What impresses me most about the Russos is that they bring real stakes to the proceedings—action sequences are raw, physical, and genuinely surprising—while never losing the lightness of touch that is essential to realizing a comic-book tone. (Obviously, fellow superhero director Mr. Snyder should take some careful lessons from the Russos; for my money, so could Mr. Nolan.) A prolonged central set-piece—an escalating clash of all the heroes in a deserted airport—is so giddily good that my inner 10-year-old can't understand why I would complain about anything else in the film.

And Civil War maintains a strong grasp of character as well, which is a remarkable accomplishment in a film as choked with characters as this one is. All the previous Avengers are back except for Thor and the Hulk, and the cast is rounded out with other, solo Marvel stars past (Paul Rudd's Ant Man) and future (Tom Holland's Spider-Man and Chadwick Boseman's Black Panther). Somehow, none of these inclusions feels gratuitous: no one but Cap and Iron Man gets a lot of screen-time, but the Russos make sure everyone gets something significant to do, and screenwriters Christopher Markus and Stephen McFeely are incredibly effective in making each character emotionally and tonally distinct. I can't say everyone gets a character arc—that would be impossible—but everyone gets some jokes, some powerhouse sequences, and at least one or two moments that remind us they're actually people.

(Coming out of my screening, all I heard anyone talking about was Spider-Man and the Black Panther—and deservedly so. To the extent Civil War wanted to be a promotional introduction to these characters, to generate excitement for their forthcoming solo ventures, it succeeds ridiculously.) 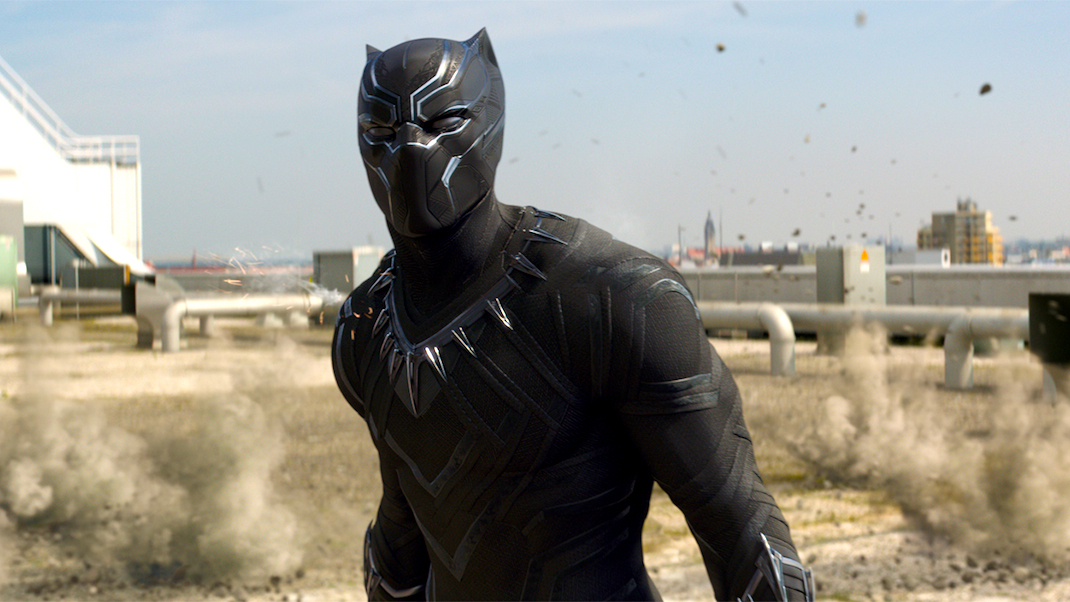 So Civil War delivers—brilliantly—more than we could possibly hope for from a superhero movie. I just wish it hadn't promised more than a superhero movie could really handle. As with The Winter Soldier, the premise of Civil War is rich with questions—about civil liberties, government overreaching, political polarization, collateral damage, and military/law-enforcement accountability—that are important and timely. However—as with The Winter Soldier—the film neither wants, nor is equipped, to really address those questions. Feints at political and ideological meaning turn out to be just a smokescreen, one designed to provide false shades of grey to what is still, fundamentally, a four-color world.

Profound philosophical differences, you see, are complicated, and divisive, and ultimately unresolvable by punching. And so the film's plot hastily abandons such fuzzy complexity in favor of a simplistic tale of factual misunderstanding and personal emotions. Steve Rogers' old friend Bucky Barnes (Sebastian Stan) becomes suspected of a terrorist act, and must be protected from Iron Man's government-supervised strike force long enough for Cap to learn the truth. In this turn, Civil War surrenders all pretense of being a political allegory, and becomes a much easier-to-digest chase-movie and murder mystery, like The Fugitive with tights.

This would not be so regrettable if the resulting, simpler comic book plot weren't so very, very terrible. But the villain at the center of Civil War—yes, there is one, though of the blandest and most forgettable variety—turns out to have engineered a very complicated and absurdly homicidal plot in support of goals that could be accomplished more easily with a quick email or a YouTube account. (Wait, we say, when we discover his evil plan, THAT'S what this was all about?) And the resolution of this plot doesn't really have anything to do, thematically, with the fundamental conflict of ideologies the film has pretended to be about.

To be clear, it's not that I resent Civil War for copping out so cowardly on its own premise: it's that I think the premise was ill-fitted—and a little disingenuous—to begin with. For the second film in a row, the Russos want to draw false weight from important issues, but they don't want to have to actually deal with the ramifications of the issues they raise. A potentially smart real-world allegory degenerates into an inarguably dumb comic-book plot, and the bait-and-switch just exposes, once again, the inherent limitations of the superhero genre.

I have been debating since I saw it whether Civil War is the best superhero movie so far: make no mistake, it really is that much fun. But ultimately I still have to let Whedon's The Avengers retain the crown, because it understood—and was unashamed about—the fact that it was just a great comic-book movie. The Russos keep wanting to pretend there's more going on here than superhero shenanigans, which makes their films—for everything they do right—ultimately and unnecessarily feel like they've failed their own ambitions.

Just give us the goods, boys: you do it so very well.