Wonder Woman is part of My Summer of Summer Movies, in which I'm attempting to see and review every single movie that opens (in Chicago) between Memorial Day and Labor Day. Read all about this ill-advised plan here.

From all the hype, argument, and extraneous punditry surrounding Patty Jenkins' Wonder Woman, one could be forgiven for feeling like the release of this film is somehow a referendum on gender dynamics in American popular culture.

There have been precious few big budget superhero movies with a female lead, and the few there were—including Supergirl (1984), Catwoman (2004), and Elektra (2005)—weren't very good, and mostly flopped. A certain loud contingent of misogynistic male movie fans—forever threatened by any pop culture experience that isn't created exactly in their image and catered precisely to their whims—have reliably attacked the Wonder Woman movie since the moment it was announced; they seemed to see it—like the all-female Ghostbusters—as yet another sign of the "SJW" apocalypse, and they've been crying exaggerated tears over women-only screenings of the film at Austin's Alamo Drafthouse.

Meanwhile, on the other side of the gender wars, the feminist credentials of every element of the film's cast, crew, content, presentation, and packaging have been argued over: from a perceived lack of studio marketing, to the character's lack of armpit hair, to the question of whether its lead male character is a mansplainer, to the issue of whether Wonder Woman should be fat-shaming by allowing her image to be used to sell "ThinkThin" protein bars.

I hasten to say that I am not equating all of these discussions as either comparably valid or comparably absurd. (The man-baby reaction is wholly absurd: get over it, snowflakes.) I'm only saying that there is a lot of discussion—some petty, some important—and that the stakes feel ridiculously high. (Just yesterday, a woman I know said "I am sick with fear and excitement about Wonder Woman. I might be putting too much into it.")

Like every other woman venturing into a male-dominated arena, Wonder Woman faces impossible scrutiny, standards, and expectations—from attackers and supporters alike—that no person or film should be expected to meet. DC has previously produced three superhero films in their interconnected cinematic universe: Man of Steel (2013), Batman v. Superman: Dawn of Justice (2016), and Suicide Squad (2016). They all made their money back, but they all performed below expectations, and they were all—to my mind, and the minds of most critics—irredeemably awful. Yet—as Michelle Wolf pointed out on The Daily Show—no one left those films saying, "Well, I guess we're done making man movies."

The good news is, Wonder Woman strides out into all of this controversy in exactly the same way its hero strides out into the (poignantly named, in this context) "No Man's Land" of the First World War. She doesn't spend time debating: she just ignores the men telling her she can't do it, boldly steps onto the field of battle, shrugs off the bullets, and gets the job done by being unfailingly decent and undeniably awesome.

Wonder Woman is not a perfect movie, but it's a rousing success in nearly every way. And its greatest triumph may be that it manages to make us forget all of the other stuff long enough to be a movie, and a very entertaining one at that.

After a brief, modern-day framing sequence—unnecessary, but inoffensive—Wonder Woman opens in the early part of the 20th century, with the character's childhood among the mythical Amazons on the paradisal island of Themyscira. We first meet Diana as a very young girl—played with endearing pluck by the delightful Lilly Aspell—who longs to be trained as a warrior like her mother, Queen Hippolyta (Connie Nielsen) and her aunt, General Antiope (Robin Wright). But Hippolyta is determined to keep Diana safe, implying that the girl has a special destiny and must be protected.

There is, at first glance, a clever evocation of the Disney-style princess in little Princess Diana of Themyscira. Sheltered by her overprotective parent, and dreaming of a different life, one would not be entirely surprised to hear her burst into her "I want" song. And scenes of her sneaking off to ride horses and train with weapons may remind viewers of gender-role challenging heroines like Mulan or Merida in Pixar's Brave.

But then we realize, of course, that this comparison is both imperfect and unnecessary: Diana isn't longing to play with the boys, she's longing to fight with the women, the unbelievably fierce and capable warriors of the Amazon army. She has grown up in an all-female world, after all: the idea that she couldn't do anything because of her gender would never—and, in fact, does never—occur to her. So this isn't specifically the story of a "female hero": it's just a hero's journey. The dreaming individual with great potential and a special destiny, Diana might as easily be compared to Luke Skywalker as any of her female counterparts.

And this is part of the key to the film's success: Patty Jenkins and screenwriter Allan Heinberg know that neither Diana nor Wonder Woman should have anything to prove to men, and so the film doesn't spend energy apologizing for its female hero or arguing with her doubters. (There is one brief scene, later in the film, in which the all-male members of Britain's Imperial War Cabinet express outrage at the presence of a woman in their midst. This is just about the only screen-time Jenkins spends confronting Diana with blatant sexism, and Diana handles it the same way she handles everything else: by ignoring it and doing what she has to do anyway. Diana isn't a spokesperson for feminism: she just awesomely embodies its principles.) 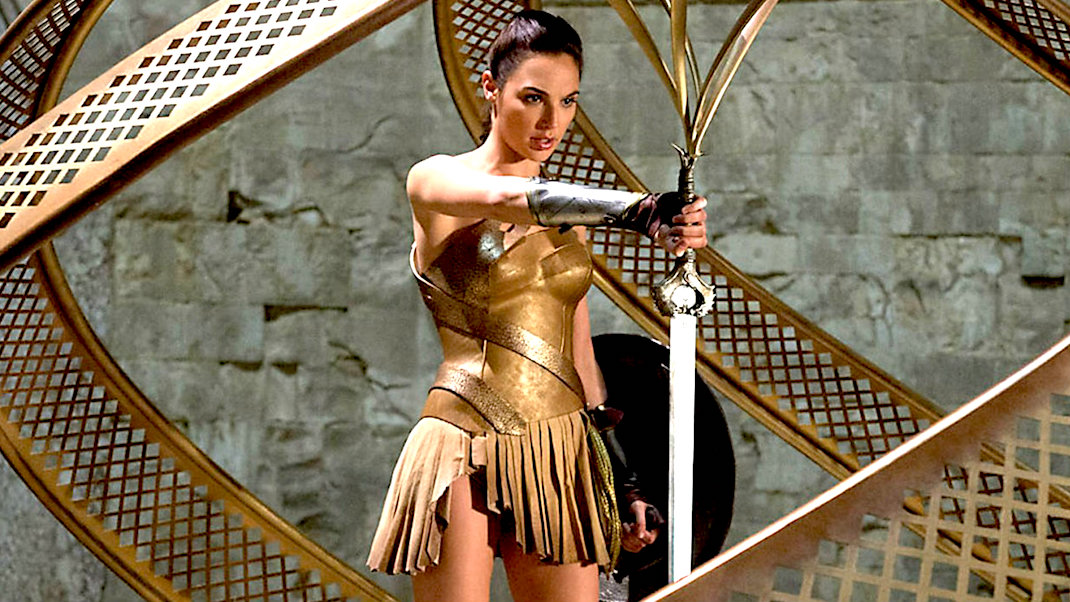 Origin stories can be the bane of superhero movies, but the Themyscira section of Wonder Woman is time well spent, establishing both the mythology of the Amazons and the essence of Diana's character. Soon, however, Diana has blossomed into an adult (played by the radiant Gal Gadot), and danger has arrived in the form of men. American spy Steve Trevor (Chris Pine), working undercover in German intelligence, has stolen plans for a monstrous new chemical weapon being developed by evil General Lundendorff (Danny Huston) and his chief chemist, Dr. Isabel Maru (Elena Anaya). Steve crashes his stolen Fokker in the waters surrounding Themyscira, pursued by hordes of German soldiers who—in the first of several spectacular action sequences—learn just exactly how formidable the Amazon women are. Diana—learning that the entire world outside the Amazons' island paradise is engulfed by war—demands that Steve take her to the fighting so that she may restore the peace by slaying the Greek God Ares, whom she believes is responsible.

I won't discuss the plot much further, except to say it mostly works. Story, too, can be the downfall of many superhero movies, but Wonder Woman's is less cluttered and chaotic than most: the story feels all of one cloth, and the many fight scenes and set-pieces are both beautifully executed and emotionally integral. Thought slightly over-reliant on CGI—like all the DC movies—Wonder Woman pulls off exciting, bone-crunching action sequences that never lose their human components. There are real emotional stakes to the battles, beyond the (considerable) thrill of seeing Gal Gadot kick unbelievable ass.

Best of all, however, Jenkins finds time for quiet beauty and character development between the battles. Conversations with the ragtag group of comrades Steve enlists for the mission—including Lucy Davis, Saïd Taghmaoui, Ewen Bremner, and Eugene Brave Rock—provide some welcome comic relief, but also some genuine warmth and emotional grounding: they are minor characters, but Jenkins and Heinberg respect their humanity in a way that's rare in these sorts of films. The dialogue throughout is smart—almost never clunky or obvious in the way of too many action films—and small, poignant touches (a brief dance in snowfall, a conversation between Steve and Anaya's "Dr. Poison," and silent moments of Diana witnessing the horrors of war, for example) are worth all the noisy sturm und drang of the previous three DC movies combined.

The unquestioned key to the film's success, however, is Gal Gadot's Diana. So indescribably perfect is this marriage of star to role, in fact, that it's almost impossible to determine whether to apportion more credit to Gadot, or to Jenkins and Heinberg: let us just agree that, between the three of them, they get this character exactly right. Diana is stunningly beautiful, without being overtly sexualized, let alone objectified. (Name me one other female hero or villain in superhero movies whose sexuality isn't considered a super-power: go on, I'll wait. Here, it's notable that the only character who uses their sexuality to try to get what they want is Steve Trevor.) Diana is strong, confident, and aggressive, without ever coming across as smug or cocky. She is a little naive and inexperienced—owing to her upbringing—but the film never condescends to her or underestimates her considerable intelligence. She is funny, without ever being sarcastic or mean. And she just radiates pure decency. To pull off this combination of qualities with any character is difficult—Zack Snyder and Henry Cavill couldn't quite do it with Superman in Man of Steel or Batman v. Superman—but the degree of difficulty is raised considerably here. As I suspect Hillary Clinton (or most other women) might testify, coming across as strong, smart, confident, likable, and funny—all at the same time—has more potential pitfalls for a woman than it does for a man. Gadot, however, does it effortlessly, brilliantly embodying the first superhero in DC's expanded universe who actually seems like a hero.

As I said, Wonder Woman is not perfect. In common with too many of its cape-and-cowl compatriots, it is a tad too long, and tends toward CGI-saturated chaos in the final reel. The love story, though tender and believable, comes across as slightly unnecessary. (In fact, it is thankfully given short-shrift.) The ending is a bit simplistic, and some gratuitous voice-over narration (which bookends the film) is the only writing in the entire screenplay that feels heavy-handed and clunky.

But these are minor complaints that don't begin to mar the accomplishment of a fun, smart, emotionally grounded superhero film—one that had a high-bar to clear, and cleared it, easily, while wearing heels. So rest easy, well-wishers—and suck it, haters—Wonder Woman is a major triumph.