Girls Trip is part of My Summer of Summer Movies, in which I am attempting to see and review every movie that opens (in Chicago) between Memorial Day and Labor Day. Read all about this ill-advised plan here.

I doubt many reviewers will resist the urge to compare Malcolm D. Lee's Girls Trip with the similarly themed Rough Night, which appeared—and then quickly and mercifully disappeared—earlier this summer. I won't completely resist the impulse either, but I probably should, because it is an association that neither film truly deserves. "Everything you had, we had," one character narrates at the beginning of Girls Trip. "Everything you did, we did it better." The character is talking about her college days, but she could be talking directly to the producers of Rough Night.

Yes, both films concern a group of former college friends reuniting as adults for a wild weekend that involves a fair amount of drinking, drugs, and sexual shenanigans. One can even, roughly, chart the corresponding personalities of the main characters in each film: there is the professionally successful one, with much to lose; there is her former best friend, resentful over how the friendship has been neglected; there is the uptight one, who needs to cut loose; and there is the wild one, who will say almost anything and provides the bulk of the comedy. (Okay, there were five main characters in Rough Night, so the overlay is imperfect—but you get the idea.)

This, however, is where the comparisons end, and the differences between the two films go far beyond the fact that four of the women in Rough Night were white, and all of the women in Girls Trip are black. Rough Night was a faux-naughty, fatally unfunny mess of a movie in which both the paper-thin characters and the contrived situations were completely, annoyingly unbelievable. Girls Trip, on the other hand, manages to be genuinely funny—more daring and raunchy than its poser predecessor by a mile—while also being a moving story about women who feel like real characters, with real friendships, for real emotional stakes.

So this is the last time I will mention the phony and forgettable Rough Night in this review: it doesn't deserve to be associated with Girls Trip, which emerges from this hypothetical cage-match as not only the superior film—which would be faint praise—but as a total triumph on its own terms.

Written by Kenya Barris (creator of Black-ish) and Tracy Oliver (Survivor's Remorse), Girls Trip follows the reunion of four college friends who call themselves "The Flossy Posse." Ryan (Regina Hall) is a successful author and self-help guru whose new book, You Can Have It All, is about to catapult her—and her (supposedly) perfect marriage to ex-NFL star Stewart (Mike Colter)—into an Oprah-level national brand. Ryan has been invited to give the keynote address at the annual Essence Festival in New Orleans, and she has invited the rest of the Flossy Posse to join her.

In addition to Ryan, the Posse includes Sasha (Queen Latifah), a struggling journalist currently running an online slander-blog; Lisa (Jada Pinkett Smith), a buttoned-down nurse and single-mother; and Dina (Tiffany Haddish), an office worker who is…well, whatever the opposite of buttoned-down is. (Though all four leads are excellent—particularly Hall, who carries the emotional center of the film with power and grace—Haddish's perfect timing with a filthy joke should ensure that she's the comedic break-out star of Girls Trip.)

Most of the comedic set-pieces in Girls Trip—which include an absinthe-fueled group hallucination trip, some high-wire urination, and the considerable dangers of employing citrus fruits as sexual aids—are not much more wildly original than the film's premise, but they work: they generate surprising, genuine hilarity that—for all the over-the-topness—remains remarkably grounded in character, and somehow never feels mean-spirited, humiliating, or demeaning. It is no small feat to create a comedy this broadly funny that also feels intimate, organic, and empowering, but Lee (the director of The Best Man) pulls it off with aplomb, and each member of his talented cast is more than up to the challenge of keeping one foot firmly in reality even as the other steps brazenly over the line. 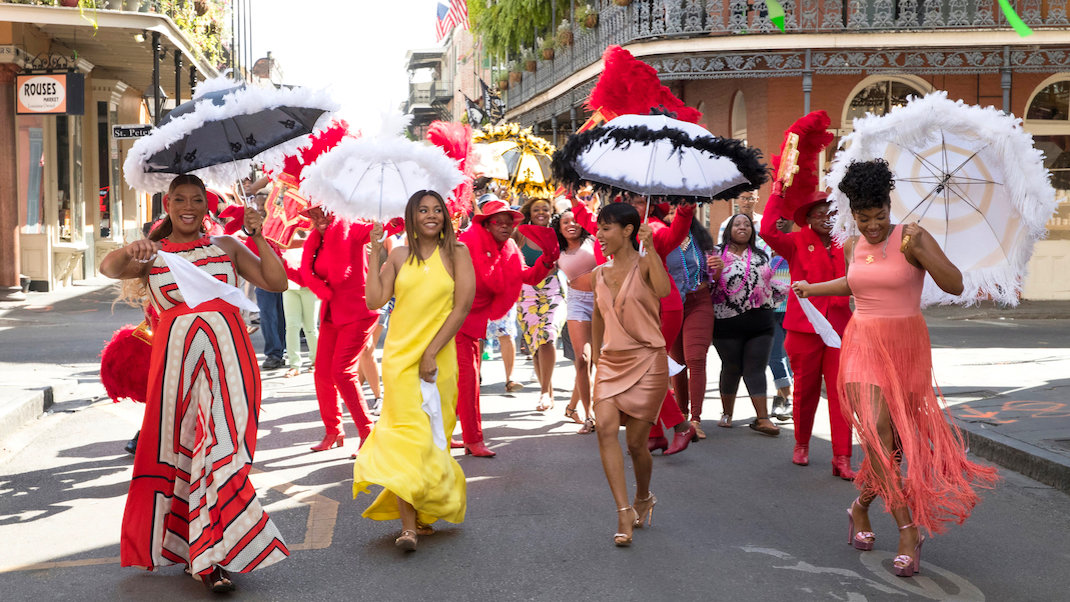 Even more remarkable is how Girls Trip manages to feel not just like an actual story—rare enough in raunchy comedies—but a surprisingly affecting one. There is perhaps nothing terribly original about the film's plot (which has the women dealing with issues of lust, infidelity, and the perceived betrayals of friendship), or about the film's message (about sisterhood, honesty, and—as Ryan's carefully maintained facade begins to slip—maintaining your strength and pride while accepting the messy complexity of life). But there is something revolutionary about a film that takes black women seriously while allowing them, simultaneously, to be unapologetically bold and hysterically funny. Girls Trip earns every one of its laughs and its emotional beats, dealing with real issues and authentic tensions amid the steady-stream of slapstick gags and sexually explicit one-liners. (You may be surprised—as I was—to reach the climax of the film and discover just how emotionally invested you've grown in characters who earlier pissed on a crowd of onlookers or had hallucinatory sex with a floor-lamp.)

And there is something amazing, too, about the sheer joy, freedom, and sense of community Girls Trip manages to generate, without ever descending too far into phony, patronizing platitudes. Filmed on location at the actual 2016 Essence Music Festival—and thus featuring cameos from a pantheon of black literary, film, and musical luminaries—Girls Trip has the joyful air of a party throughout, a shamelessly proud and infectious celebration of the genuine beauty and strength of black women everywhere.

Do not be fooled by the trailer, which makes the film look like it is only a broad, raunchy comedy. And—if I can be forgiven once more for comparing this film to another—do not be fooled by critics who tell you, as I'm sure they will do, that The Big Sick is the best American comedy of the summer. Girls Trip easily surpasses it on laughs, and—surprisingly, but undeniably—has it beat on feeling as well.