Rough Night is part of My Summer of Summer Movies, in which I'm attempting to see and review every single film that opens (in Chicago) between Memorial Day and Labor Day. Read all about this ill-advised plan here.

In the current culture of horrifyingly emboldened misogyny, I am somewhat reluctant to speak out against any mainstream, big budget films starring and directed by women. I am rooting for such films to succeed; I want future films by women to be greenlit; and I do not want to provide comfort and ammunition to the hordes of online trolls lining up to shit on anything that doesn't pay sufficient homage to the all-powerful Y-chromosome.

So I need to be very clear here: I am not, for a moment, saying that women are not, or can not be, funny. I am, however, saying that Rough Night is nowhere near as funny as it wants to be. Tired, tedious, and disappointingly tame, it's a mediocre waste of considerable talent.

Directed by Lucia Aniello—who co-wrote the screenplay with Paul W. Downs—Rough Night is self-consciously a gender-swapped, '80s style raunchy comedy: the women go off to be drunken, lecherous idiots, and the sidelined men stay home and discuss their feelings over an insouciant Beaujolais.

Scarlett Johansson plays Jess, a young woman with a lot on her plate: she is getting married to her nice-guy fiancé Peter (Downs), and she is running for state senator against a dick-pic distributing male opponent. Jess takes a break from the campaign trail, however, to fly to Miami to join four college friends (Jillian Bell, Zoë Kravitz, Ilana Glazer, and Kate McKinnon) for her bachelorette weekend.

Jess is hoping for a low-key affair, but she soon succumbs to peer pressure as the night quickly spirals into clubbing, drinking, and drugging. (May the gods of cinema save me from any more scenes of privileged, mostly white people "breaking bad," in slow-motion, to a blaring gangsta-rap soundtrack. Office Space was a long time ago, folks.) Before too long—as so often happens after a wild night—the women find themselves standing over the inconveniently dead body of a male stripper (Ryan Cooper) on the floor of their borrowed beach house. Body-disposal "hilarity" ensues, complete with faithful reenactments of selected scenes from Weekend at Bernie's.

These are talented actresses, all: they manage to make the film barely watchable, and even to squeeze the occasional laugh out of material that is far, far beneath them. But they are all working desperately to breathe life into characters who are shallow types, not actual people, and a screenplay that is nothing more than an assemblage of old gags and clichés repurposed without purpose. Bell, as Jess's needy and neglected best friend, gets the lion's share of the scripted jokes (most of them at her own expense). But it's McKinnon, unsurprisingly, who commits grand-theft cinema and steals every scene she's in. (If anyone still doubted she is a major comedic talent, watch her wring upstaging gold out of every tired line and look her one-note, stereotypical Aussie character has to work with. She almost manages to make a Crocodile Dundee-era Vegemite joke funny.) 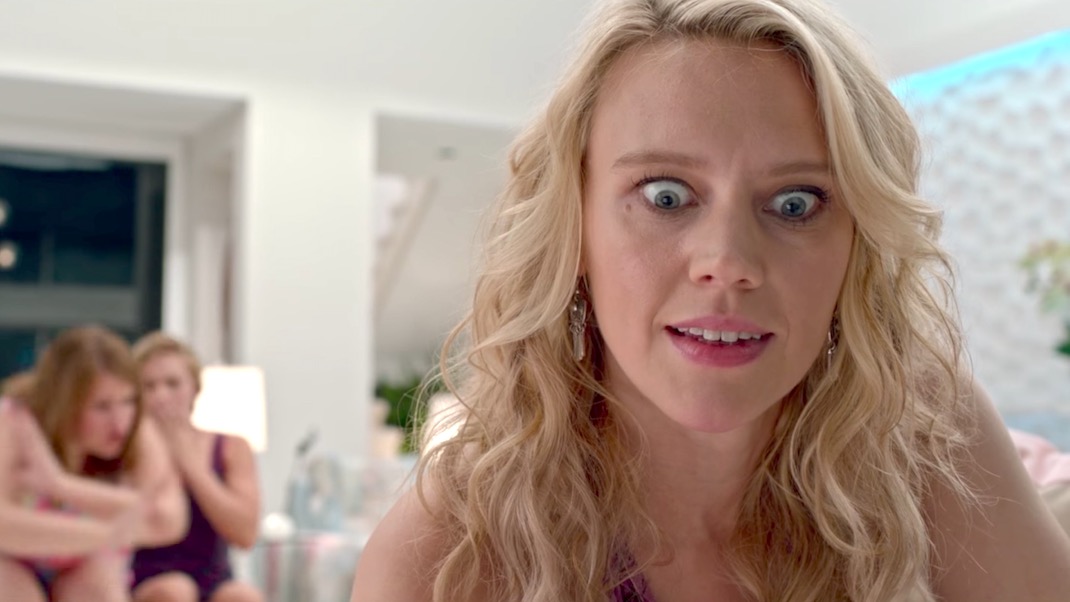 Ironically, the film saves the only even vaguely original bit of comedy for co-writer Downs' male character, who decides to go "sad astronaut," don adult diapers, and race desperately across the country towards his wayward fiancée. (This sequence isn't particularly funny either, but at least it's different, and slightly dark: it's about the only sequence in the film that has a hint of the genuine edge and comedic risk of Broad City, the infinitely superior TV show Downs, Aniello, and Glazer all work on.)

What the women get to work with in Rough Night, however, is just easy dick jokes, and tired slapstick, and random, faux-shocking contrivances. (For example—and for reasons surpassing my willingness to explain them—poor Zoë Kravitz's character is forced to pimp herself for a tonally bizarre ménage à trois with creepy swingers Demi Moore and Ty Burrell. This sequence definitely isn't funny—and in fact is should be kind of disturbing—but somehow it still manages to feel timid, prudish, and weirdly inconsequential.) Nothing in Rough Night is funny or original enough for the film to succeed as pure comedy, and none of the characters are deep enough for the film to become the treatment of female friendships it occasionally gestures at being. So it ends up being—what? Just a worn-out parade of meaningless, off-color shenanigans, with neither wit nor weight. (What's Rough Night about? It's about an hour and forty minutes.) 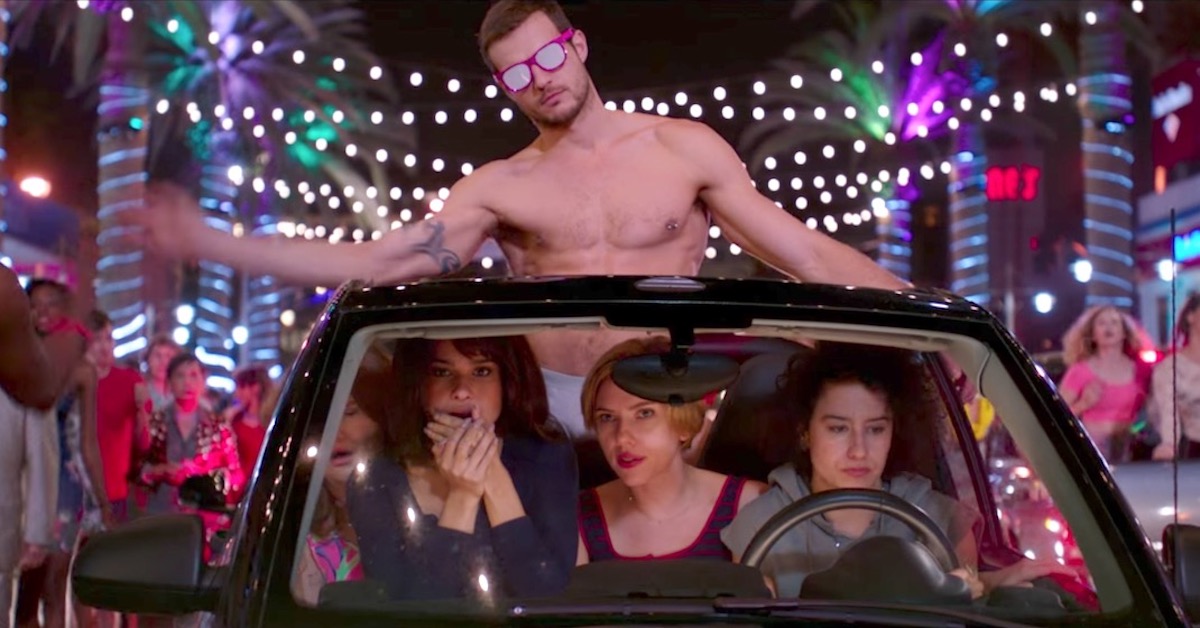 Look, I'm all for comedies about women behaving badly and stupidly: God knows, we have a century of films about men behaving badly and stupidly, and most of them are just as unoriginal and unfunny as Rough Night. But can we set the bar a little higher for all future comedies? There is a painful self-consciousness about the bad behavior here, a smug, winking, look-how-raunchy-we-can-be phoniness that can only be described as "adolescent," whatever the gender of the participants. Are there really people who would be humorously shocked to see grown women in the 21st century swearing and taking drugs and expressing sexual desires? Is it really revolutionary to show women making decisions just as dumb as men make? Rough Night has a peculiar lack of real wit, and a tragic absence of real boldness. It seems to rely lazily on the assumption that the audience will find its toothless premise alone outrageous and hysterically funny. Frankly, it's hard to imagine a focus group of sheltered Republican grandmothers doing anything more than tittering weakly at this.

Rough Night just doesn't have the courage of its pretended coarseness. Nothing in it is truly shocking, no one behaves truly badly, and none of the paper-thin characters dares for a moment to be even a little dislikable. It's all just a series of madcap hijinks and misunderstandings, which at best—or worst—could be characterized as "slightly naughty." (The end of the film cops out completely on even this misdemeanor level of sin, restoring the gloss of goodness and purity to everyone and solidifying the safe status quo.)

Thirty or forty years ago a "slightly naughty" mainstream comedy featuring an all-female ensemble might have raised the eyebrows Rough Night so clearly hopes to provoke. (Perhaps not even then: Heathers was thirty years ago, after all, and Rough Night doesn't have a tenth of that film's genuine willingness to be wicked.) Rough Night desperately wants to be seen as a progressive blow for cinematic gender equality, but the notion that any of this is shocking—let alone funny—may make it the most regressive and conservative film I've seen all summer.