Despicable Me 3 is part of My Summer of Summer Movies, in which I am attempting to see and review every movie that opens (in Chicago) between Memorial Day and Labor Day. Read all about this ill-advised plan here.

My general approach to reviewing movies like Despicable Me 3 is to pretend I have children. (I don't.) How intolerably painful, I ask myself, would I find it to accompany my hypothetical (but no doubt still adorable and perfectly behaved) children to the multiplex for a viewing of Despicable Me 3? Could I stand to sit with them through the 90-or-so minutes the film would take to unreel? Or would I handcuff them to their seats, leave them to fend for themselves, and sneak out to the nearest bar to pound as many drinks as I could before I was legally obligated to return and reclaim my now slightly stupider hypothetical progeny?

That probably sounds like an absurdly simplistic grading system, but, honestly, isn't it the most important question for a reviewer to answer? There's no doubt that there are some animated films that function nearly as well for adults as they do for children. (Most of their titles are preceded by the words "Disney's" or "Pixar's," though those words are certainly no guarantee.) Other animated fare, however, largely exists to give the kids something to see (and inspiration for some toys to buy). There's nothing necessarily wrong with that—or, at least, it's no more immoral than children's entertainment has always been—but it would be ridiculous for me to review such movies as if they were made for me.

(Normally, I just wouldn't review such films at all, but I'm trying something different this summer. So this isn't the first time I've been faced with this conundrum, and it won't be the last. In the next few weeks, you can look forward to my carefully reasoned critical assessments of The Emoji Movie and The Nut Job 2: Nutty by Nature.)

The point is, I find I would be okay with taking my imaginary children to see Despicable Me 3.

As Despicable Me 3 opens, reformed super-villain (and adoptive father) Gru (Steve Carrell) has joined his new super-spy wife Lucy (Kristen Wiig) in the Anti-Villain League (AVL), tracking down notorious ne'er-do-wells. However, when Dru fails to apprehend '80s child-star-turned-super-villain Benjamin Bratt (Trey Parker) in the act of stealing the Biggest Diamond in the World, Dru and Lucy are fired by the stern new head of the AVL, Valerie Da Vinci (Jenny Slate). The newlyweds' new state of unemployment causes anxiety amongst the children (Miranda Cosgrove, Dana Gaier, and Nev Scharrel), and causes most of Dru's faithful Minions to abandon him and go off to pursue their own criminal endeavors.

Having free-time turns out to be a good thing, however, because soon the whole family is off to the Mediterranean nation of Freedonia so that Gru can reunite with Dru (also Carrell), the long-lost twin brother he never knew he had. (Apparently, when their parents split up, the father took Dru, and their mother [Julie Andrews] got stuck with Gru. "You told me dad died of disappointment when I was born!" Gru protests to the loveless old woman.) Further revelations are forthcoming: Gru and Dru's father was also a super-villain, and Dru wants his brother to return to a life of crime and help him honor the family name. Meanwhile, Gru just wants to capture Benjamin Bratt, retrieve the diamond, and get reinstated by the AVL. 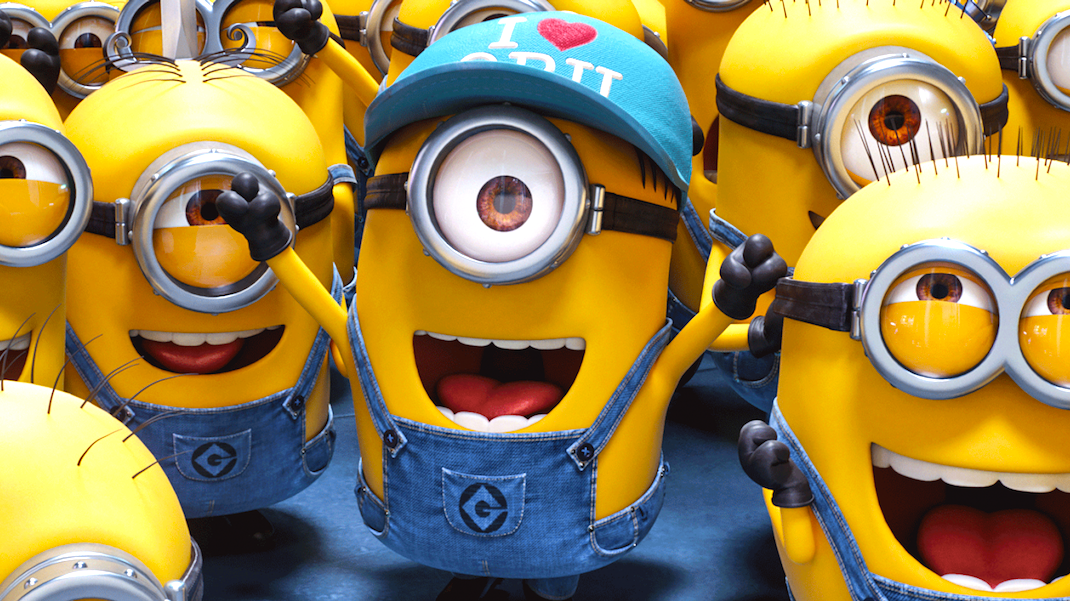 Much colorful silliness ensues, as the two brothers—with different motivations—pursue Bratt and his stolen diamond. (The mullet-headed villain is the most obvious bone Illumination Studios has thrown to the grown-ups, since few members of the film's target demographic will recognize all the musical and cultural references in his elaborate, '80s-themed shenanigans. Alas, this member of Generation X found him to be the weakest element of the film—but then I never did enjoy the '80s.)

Meanwhile, sub-plots accumulate at alarming, attention-deficient speed: the incomprehensible (but still funny) Minions have become the dominant gang in a prison; Lucy is struggling to figure out how to be a parent to her three new stepdaughters; youngest child Agnes is in search of a unicorn; and oldest child Margo finds herself accidentally engaged to a plump and lonely Freedonian boy. (Among the unfailingly adorable moppets, only mischievous middle-child Edith is denied her own sub-plot: speaking as one myself, I can testify that middle-children always get screwed.)

None of it is terribly deep, none of it hangs together particularly well, and all of it is fairly predictable. But—within the slightly lowered expectations of the genre—it all provides a fair amount of disjointed fun. Illumination's animation still doesn't have the soul or depth of beauty that the best of Pixar's work can boast, but it has improved considerably since the last of these films, and there's a surprising amount of enjoyable detail to be found in each frame. And, as nonsensical as most of its devices are, Despicable Me 3 comes up with some fairly clever set-pieces. The sequence in which Gru and Dru break into Bratt's island hideout—and particularly a bit in which they activate their "sticky suits" to cling to the side of the building—is probably the most inspired bit of slapstick. An inexplicably genius Minion-rendition of Gilbert and Sullivan's "Major General" is probably the funniest. And the final confrontation—as Bratt wreaks giant-robot havoc against the Hollywood that spurned him—achieves a giddy scale of clever mayhem. (Having just been underwhelmed by Spider-Man: Homecoming, I can say without irony that Despicable Me 3's climax is far more heroic, epic, and satisfying.) And, mixed in with all of this, Despicable Me 3 provides a heartfelt message—unoriginal, but sweet—about family.

Even compared to its own prequels—let alone compared to more artful and ambitious franchises—Despicable Me 3 feels uneven, chaotic, and far too easily distracted. But there are also many worse examples of animated kiddie-fare to which it could be favorably compared: this one at least has some laughs, some cleverness, and some heart. I may be getting as soft as Gru in my old age, but that seems like enough.