Cars 3 is part of My Summer of Summer Movies, in which I attempt to see and review every movie that opens (in Chicago) between Memorial Day and Labor Day. Read all about this ill-advised plan here.

Cars (2006) is one of the few Pixar movies that I have only seen once. Cars 2 (2011)—which was largely a vehicle (pun unavoidable) for Larry the Cable Guy, and critically the poorest received of all the studio's films—is the only Pixar movie I felt no need to see at all. Now Cars 3 has arrived, and I wonder what on earth a critic could possibly say that would make any difference one way or the other.

You either like these movies or you don't. I don't. The original was an inoffensively passable but indifferent two hours of my life. It had some gorgeously rendered scenery, and benefited greatly from the vocal presence of Paul Newman, but it utterly failed to draw me into its world or its characters. The world—built as if for humans, but occupied entirely by anthropomorphized vehicles—made and continues to make no sense to me.

(Was there a global singularity at some point in this world's history, in which all the cars gained sentience and killed all the humans? That would make sense, but such a dark genesis was probably not exactly what Disney had in mind.)

You may say that I am making unfair demands on a cartoon franchise, but suspension of disbelief is important for investing in a world, and I had no such problem suspending mine for any other Pixar film. World-building is one of the things at which the studio normally excels, but the world of Cars feels lazy and undercooked to me. More problematically, so, too, do its stories, its characters, and even its character-design—all areas, again, in which Pixar is usually not only reliable but exemplary.

But none of that matters. Even if the Cars franchise doesn't make sense, it makes money by the talking-truck-load. The two previous films did just fine in worldwide box office, but it's the DVD sales, toys, and merchandising that really make the brand a cash-cow. (In 2011, five years after the release of Cars, and just prior to the release of Cars 2, Disney reported that franchise was bringing in over $2 billion per year in revenue.)

All of which is pretty good incentive for Disney/Pixar to keep the franchise alive, introducing new characters and slapping new paint-jobs on old characters. (By my calculation, protagonist Lightning McQueen gets no fewer than five complete makeovers in this latest installment, ensuring a healthy bottom-line for the toy division. "Hey, kids, your collection isn't complete without the new Lightning McQueen: Primer Coat Edition!")

And Brian Fee's Cars 3, as a whole, plays out like exactly the kind of sequel you would expect such a marketing-minded juggernaut to produce. It isn't terrible: it just isn't much of anything. Unlike the first, critically drummed sequel—which I understand at least tried to do something different, however unsuccessfully—Cars 3 feels like a safe, only slightly tweaked retreading (damn unintentional puns!) of the first film. And, like the first film—but now lacking even novelty—it is an inoffensive two hours of time, providing only a few fleeting pleasures—and absolutely no surprises—as it races predictably around its familiar and formulaic narrative tracks. (Hey, it's a formula racer!)

Here, crimson dynamo Lightning McQueen (Owen Wilson, sounding almost as bored as I was) is no longer the hotshot rookie: now McQueen has become the elder statesman of the racing circuit, increasingly falling behind more high-tech, showier models like new rookie sensation Jackson Storm (Armie Hammer). It is the circle of engine-life, with McQueen now facing the fate of Doc Hudson [Newman], his retired mentor in the first film, who had been forced out of racing by young upstarts like McQueen himself.

To postpone the inevitable indignities of time, McQueen throws his lot in with a high-tech operation owned by slick-talking billionaire Sterling (Nathan Fillion, always welcome). Sterling puts McQueen on a rehabilitation regimen overseen by Cruz Ramirez (Cristela Alonzo, very likable), a personal trainer who once harbored dreams of being a racer herself. Sterling gives McQueen one shot to beat the odious Jackson Storm, or else retire from racing for good. 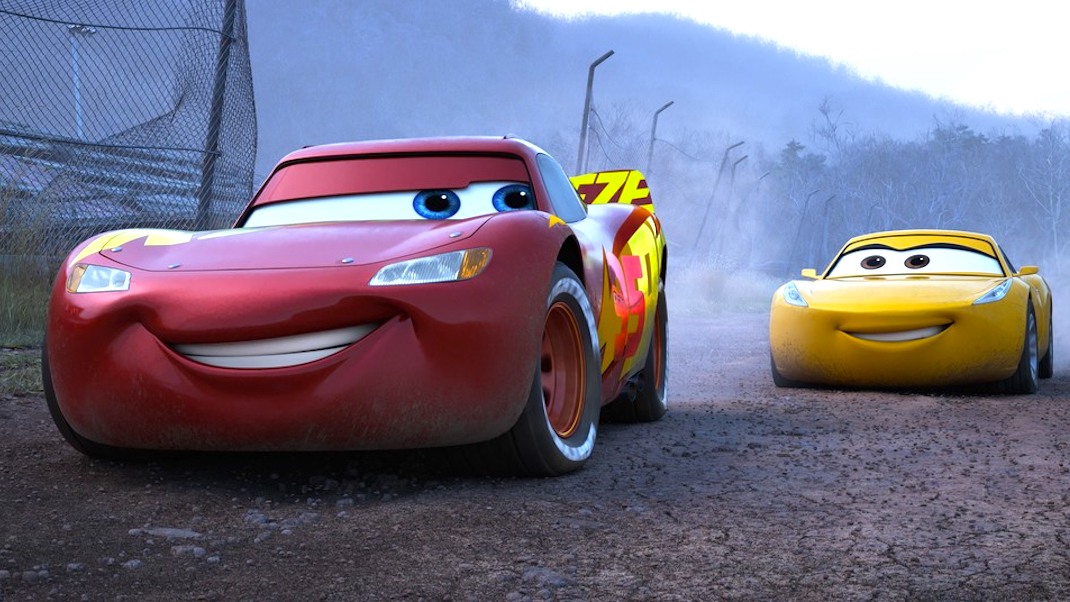 (One can't help but wonder if there is a little metafictional subtext—intentional or unintentional—in all of this. Pixar, too, began as the flashy upstart of the animation industry, and rose to be the unbeatable champion, but the studio has already begun to be occasionally shown up by new kids on the block. And, once Sterling begins talking to McQueen about not tainting his marketing brand—standing before a wall of products emblazoned with his image—it feels like the cynicism of this franchise's cash-register heart has begun to bleed onto the screen a bit.)

Formulaic to a fetish, Cars 3 begins and ends with a big race, and in between we have a lot of mildly entertaining training sequences and tangential adventures. (One sequence, set in a demolition derby, manages to provide some small novelty and fun.) And, to the extent that the film has any heart, it is in looking backward to McQueen's relationship with Doc Hudson—the film pays extensive, if slightly creepy homage to the late Paul Newman—and forward to McQueen's increasingly paralleled relationship with young Cruz Ramirez. Will Lightning learn to accept his limitations, and decide there's more to life than racing? Will the plucky but insecure Cruz get her shot at glory? Will Larry the Cable Guy's buck-toothed tow-truck get some (blissfully spare) opportunities to be a goofy redneck? Will the film end on a happy note, and set up ample opportunities for lucrative sequels and spin-offs? These questions, and more, were never really in question at all: they were answered by number-crunchers long before we settled our asses into the multiplex seats.

I still love Pixar, and I don't begrudge them their money. God knows, there is no shortage of toy commercials posing as children's entertainment, and by that standard Cars 3 is probably far from the worst option available. (If nothing else, the elevation of a female hero in Cruz Ramirez is to be celebrated: she's no Wonder Woman, but she's a welcome addition to this boys-only world all the same.) The film just doesn't have any real magic, and it doesn't have any real soul, and there is none of the genuine emotional weight that the studio is so capable of delivering. I don't look to Pixar to produce children's films that are no worse than what everyone else is doing: I expect Pixar to show everyone else how it can be done better.