Atomic Blonde is part of My Summer of Summer Movies, in which I am attempting to see and review every movie that opens (in Chicago) between Memorial Day and Labor Day. Read all about this ill-advised plan here.

Not a completely terrible movie, but a terrible letdown nonetheless, David Leitch's Atomic Blonde makes a lot of unfortunate mistakes. It mistakes stylish for cool, and cool for fun. It mistakes dour for deep, and confusing for smart. Mostly, it overestimates just how far it can ride on the strength of a stunningly beautiful Charlize Theron kicking serious ass.

This last is a mistake one would have thought impossible to make, since I personally expected and wanted little from the film but to see Charlize Theron do some well-choreographed ass-kicking. And yet, reviewing my notes from my viewing, one word leaps out, vehemently underlined in the moment as a mark of my intense disappointment: boring.

Alas, it's sad but true, Atomic Blonde is kind of boring, a messy and indecisive mediocrity that never stops moving but never quite comes to life. It's a largely wasted opportunity, which needed to be either a whole lot smarter, or else a whole lot stupider, if it was going to be any fun at all.

Theron plays Lorraine Broughton, a British secret-agent. We first see her—bruised, bitter, and belligerent—sitting at a table in a sound-proof room, being debriefed on her mission by her MI6 superior Eric Gray (Toby Jones) and CIA wrangler Emmett Kurzfeld (John Goodman). (The design of the room—and the presence of Mr. Jones—instantly invokes 2011's Tinker Tailor Soldier Spy, a comparison that does not flatter Atomic Blonde.) Through this (almost completely unnecessary) framing sequence, we hear the story of her most recent mission, which took place in Berlin, in November 1989, in the week before the wall came down.

It is in the details of the espionage plot that Atomic Blonde—based on a graphic novel by Antony Johnston and Sam Hart—fails most miserably. Broughton's mission concerns those two most clichéd of spy MacGuffins: a missing list of undercover double-agents, and the search for a traitorous mole. (These are tired and overused plot devices, precisely because they conveniently divorce spy shenanigans from the sorts of messy political nuances that many filmmakers prefer to avoid.) The list was stolen from the body of another British operative (Sam Hargrave)—with whom Broughton had some manner of sexy relationship glimpsed in gauzy flashback—whose murder lends the mission an unconvincing patina of personal vengeance.

Plot is hardly the point in a film like this, but the plot of Atomic Blonde is a maddening mess: it is both completely perfunctory and unnecessarily complicated. The parameters of Broughton's mission are never made clear, her encounters with allies and enemies alike seem random and haphazard, and the film seems to rely on twists and double-crosses that are so obviously seeded and clumsily executed that I honestly couldn't tell what was meant to be a surprise. The narrative has absolutely no shape, and the stakes—emotional or political—are vague and uncompelling. (Both problems are compounded by the frequent cut-aways back to the framing sequence, which surrender both momentum and suspense: they severely interrupt the film's flow, and they make it clear that we don't need to fear for a moment about Broughton's health.) The promising backdrop of the fall of the Berlin Wall—more or less the moment the Cold War ended—is just a backdrop, to a messy and joyless story that could take place anywhere at any time. (The setting seems to be primarily an excuse to play painfully obvious '80s hits on the soundtrack: I think we hear about three different versions of "99 Luftballons," which is more than enough to last me a lifetime.) 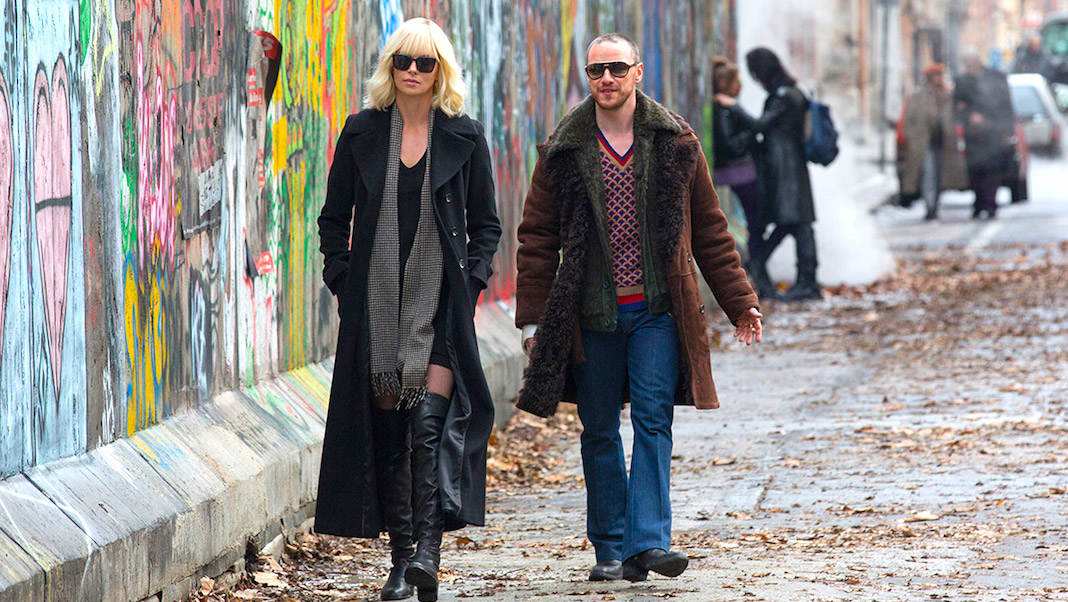 Supporting characters, too, are a source of annoyance and frustration. Broughton's chief contact in Berlin is a colorfully shady undercover operative named Percival (James McAvoy), who is such a poorly conceived, shambling mess of a character that I never knew whether we were even supposed to trust him. Even less successful (though more titillating) is a French operative (Sofia Boutella)—so naive and utterly guileless that she just might be the least convincing espionage agent since Morocco Mole—who seems to exist only to provide Broughton with a one-note sexy bedmate. Neither performer is to blame for their bizarrely nonsensical characters: the screenwriter (Kurt Johnstad, 300) has just apparently never met an actual human being, let alone any kind of government operative.

So the entire movie rests on the shoulders of Charlize Theron, and Atomic Blonde is fortunate they can just about support the precariously balanced weight. As a character, on paper, Broughton is no better than anyone else in the film. (We learn absolutely nothing about her, personally or professionally.) But Theron takes this soulless and objectified mannikin of a character and makes her stride and strut, playing Broughton as a Bond-like emotional enigma with enviable talents for vodka, sex, clothes, and combat. She makes a character who would be intolerable and unwatchable in almost any other hands into someone we can't look away from. 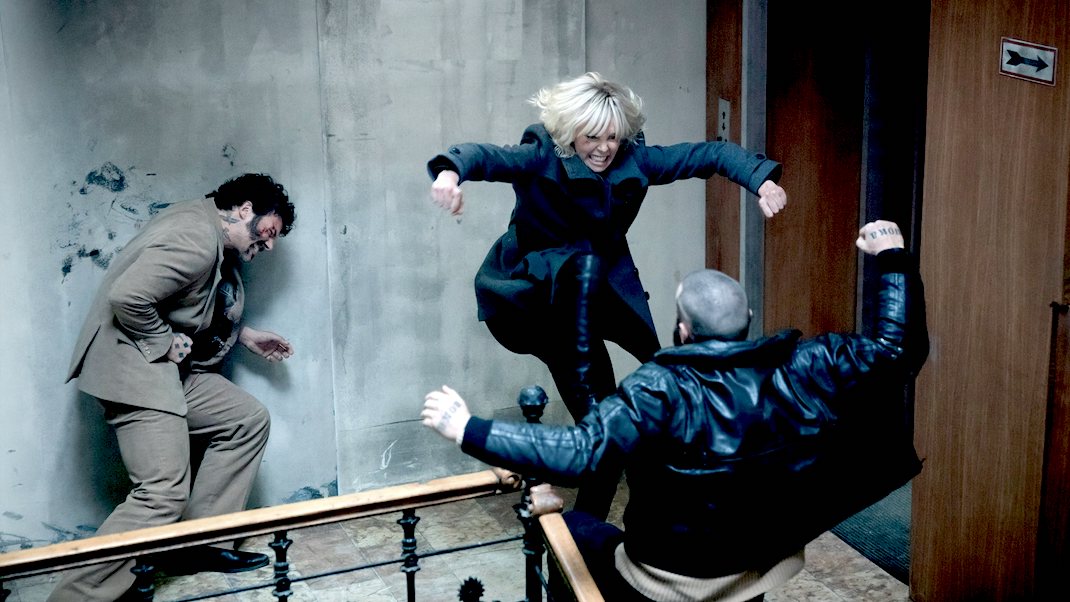 Enough, I hear you say: what about the ass-kicking? The ass-kicking is good—what there is of it—but you have sadly seen most of it if you have watched the various trailers. The strongest set-piece, by far, is a long sequence in the middle of Atomic Blonde, in which Theron fights multiple opponents through several floors of a dilapidated apartment building. Leitch (a former stuntman himself, and co-director of John Wick) convincingly plays it as one impossible, unbroken shot—there are undoubtedly cuts, albeit invisible ones—and it's the one sequence in the film that achieves any kind of sustained momentum or earns any visceral investment. The stunt choreography is remarkable, and so is the sense of physical stakes: no untouchable action hero, Broughton both delivers and sustains serious damage, and she looks like she's been in a punishing fight by the end of this sequence.

This long scene is undeniably fun, but precious little else in Atomic Blonde is. The rest of the fight sequences are too short, and spaced too far apart, and there is far too much dull and derivative nonsense dragging down the film between them. The movie's rhythms are thus fatally off, with the dumb and dour spy story sapping all energy from the spare and sparse moments of excitement. Barring a much better script, Leitch would have served his film better by removing 90 percent of the plot: we would have happily lined up to watch a simple, silly, ass-kicking revenge story starring an indomitable Charlize Theron.

Look, it is exciting to see a woman—let alone one in her 40s—headlining a film like this. And there is absolutely no doubt that Theron could easily sustain a Bond-type franchise: take this actress and character out of this film, and put them into a better one—either smarter or sillier—and I will watch the shit out of that. But, after rooting this summer for a better female action hero in Wonder Woman, and reveling in the stylized period cool of Baby Driver, Atomic Blonde feels like a pale and disappointing afterthought.