Baby Driver is part of My Summer of Summer Movies, in which I am attempting to see and review every single movie that opens (in Chicago) between Memorial Day and Labor Day. Read all about this ill-advised plan here.

Edgar Wright doesn't make movies about the world. He makes movies about the worlds that exist in our heads and hearts, the ones we have created—often without even realizing it—from gleeful saturation in popular culture. His worlds function according to the rules of genre entertainment. They move to the pulsing rhythms of music we've known all our lives. Their occupants are familiar to us, types and tropes who have taken flesh in order to alternately exemplify and explicate our archetypal concepts of cool. Wright's worlds are not our world, but we recognize them, and slip into them comfortably, joyously. We are at home in these worlds because decades of entertainment have rewired our realities and expectations, and Wright is able to open them to us because his brain has been rewired in exactly the same way.

In his previous features—Shaun of the Dead, Hot Fuzz, Scott Pilgrim vs. the World, and The World's End—Wright has maintained a winking self-awareness as he tapped into these genre worlds, and he has made sure that we did too: each of these films straddled a delirious line between parodying a thing and being the thing itself.

In his new film, Baby Driver, Wright is no less conscious of his influences and artifice—and neither are we—but he has left behind the crutch of comedic commentary. Baby Driver is often funny, but it is not a tongue-in-cheek parody of an action-heist film: it's the real fake thing, a meticulously authentic offering of a fantastically artificial world.

And it's absolutely fucking glorious.

Baby (Ansel Elgort) is a young getaway driver, working off a debt—accrued during some youthful indiscretions—to Atlanta's sinister criminal mastermind Doc (Kevin Spacey). Baby is the only member of Doc's constantly rotating crew that works every heist, and it's not hard to see why: as we see in the bravura opening sequence, Baby is preternatural poetry in motion when he's behind the wheel. In his hands, any automobile—even the shitty, non-descript cars Doc favors for jobs—can move with the precision grace of a ballerina, a parkour traceur, or an action-movie martial artist.

The secret of Baby's success—and the pumping, invigorating heart of Wright's movie—is music. Injured in a car accident as a child, Baby suffers from a bad case of tinnitus, and, to drown out its incessant whine, he blasts music, constantly, through his ever-present earbuds. We see the film entirely from Baby's point-of-view, and so Baby Driver becomes the coolest and most purposeful of jukebox musicals, scored to the cleverly diegetic motion picture soundtrack that Baby provides himself. (At one point during an escape, after an argument has thrown off his careful timing, Baby has to slam on the brakes: "Wait, wait, I gotta start the song over," he says, fiddling with his iPod before squealing away from the scene.) 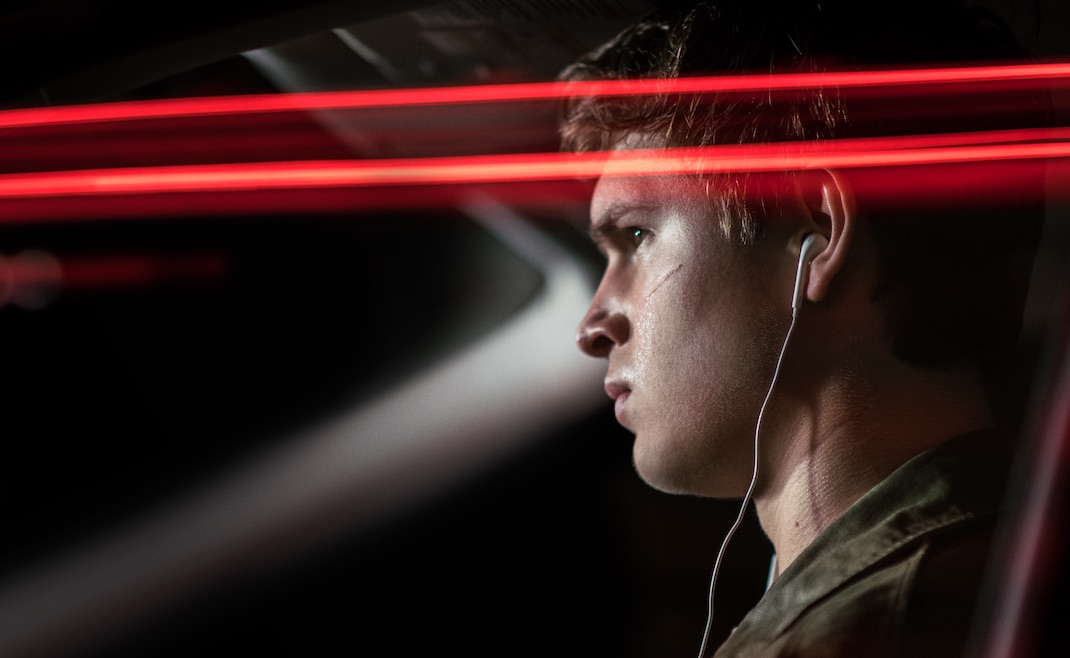 Edgar Wright has flirted with this kind of thing before—think of the giddy jukebox scene from Shaun of the Dead, in which a zombie is beaten to death to the beats of Queen's "Don’t Stop Me Now"—but Baby Driver is a film that was clearly built entirely around the music. Whether its the thrilling opening car chase set to Jon Spencer's "Bellbottoms," a car-and-body disposal scene set to the Commodores' "Easy (Like a Sunday Morning)," or a long, unbroken shot of Baby walking through the streets of Atlanta to Bob and Earl's "Harlem Shuffle," Wright has shot and edited a film according to the precise rhythms of a fantastically eclectic playlist.

And yet it never feels phony—at least, not in the cheesy-music-video or episode-of-Glee way that you might fear from the description. Baby Driver is absolutely a heightened, stylized genre reality, but within its own instinctive rules it feels organic and grounded. (And if this sounds like a contradiction, that's just proof of the small miracle that Wright manages to pull off.) For all its dazzlingly impressive stunt pieces, Baby Driver is human-sized, and human-focused. 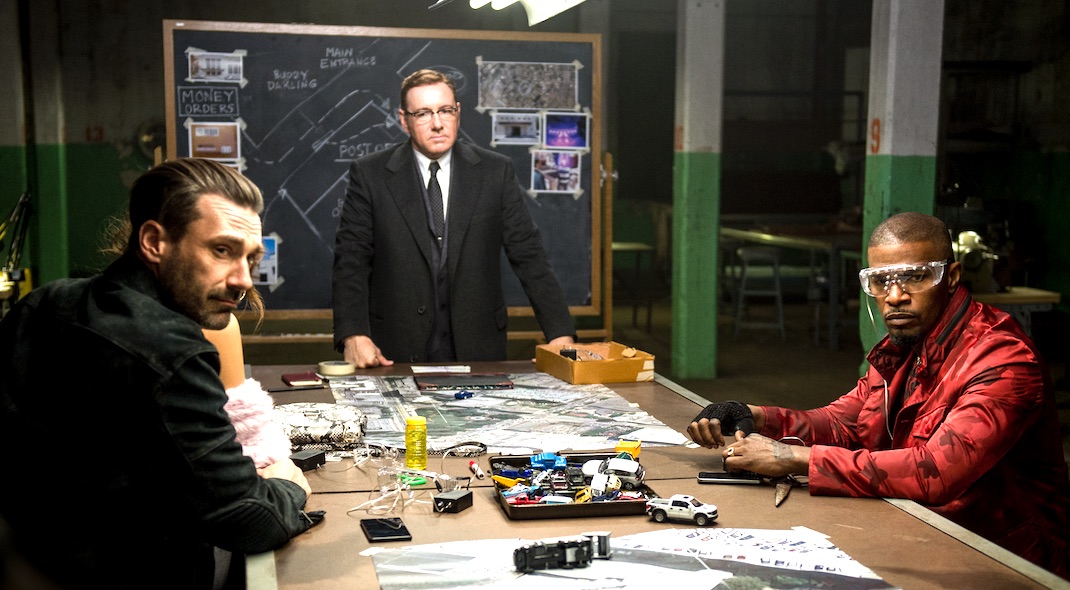 It has a familiar but engaging story, as Baby—like a thousand reluctant action heroes before him—tries to complete the "one more job" that will set him free from this life forever. It has supporting characters who are recognizable types, but just interesting enough to feel like characters. (These include: Kevin Spacey's Doc, simultaneously avuncular and ruthless; Jamie Foxx's Bats, paranoid and dangerously unstable; and a deceptively friendly pair of Bonnie-and-Clyde lovers played by Jon Hamm and Eiza González.) They are standard-issue noir partners, foils, and villains, but Wright and his actors are careful to imbue them with the suggestion of complex backstories and fascinatingly damaged souls.

And, most of all, Baby Driver has heart: the elusive quality that is the difference between the coldly kinetic technical achievement this movie might have been from any other director, and the emotionally compelling one crafted by Wright's more tender and humane hands. Elgort's laconic Baby is just enough of an iconic blank slate to be movie-star-cool, but he is also vulnerable enough—and quirky enough—for us to invest in him as a sympathetic character. It's an intelligently restrained performance, and Baby's humanity is brought out considerably by his relationship with his deaf foster-father (C.J. Jones), and by his surprisingly compelling love-story with a winsome diner waitress named Debora, played by Lily James. 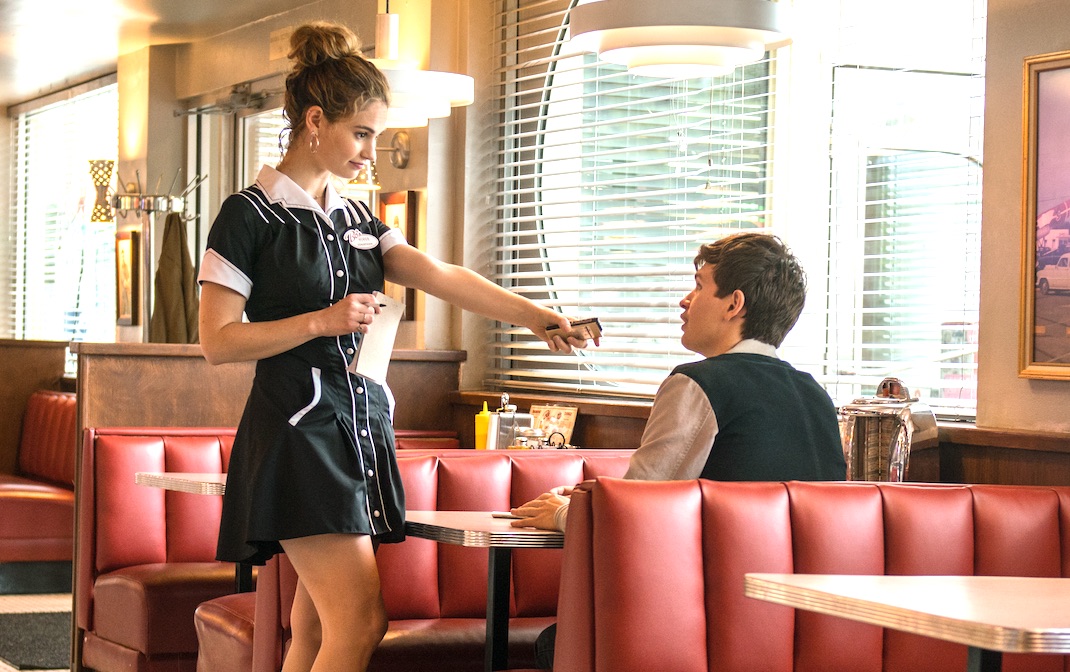 James' brief career has not exactly been languid so far—she was Disney's live-action Cinderella in 2015, after all—but this should nonetheless be a breakout role for her: she gives a remarkably smart performance as a not terribly smart person, and turns what could have been a thankless moll-role into the unexpected soul of the film. Elgort and James make the relationship between Debora and Baby feel believable not because it resembles real life, but because it perfectly and authentically captures the ache of young love as we know it from movies and pop songs.

That magical quality of the familiar made fresh—and the artificial made real—is what Edgar Wright achieves throughout Baby Driver. It's the film that the pop-music, pop-culture obsessed Wright has been building towards throughout his career: a hundred recognizable tropes re-channeled through a singularly unique and original vision, emerging as something that moves and dazzles in new and exciting ways. And it's the full-package movie experience we all hope for from this kind of film, but so rarely get: one that disappoints on not a single front. Funny, thrilling, smart, stylish, heartfelt, and boasting a killer soundtrack, Baby Driver is the movie of the summer.