I'm returning to my reviews of The Affair after an unscheduled hiatus—real life interfered and prevented me from writing about the last couple of episodes—and I find myself coming back to it now with a slightly different perspective. My posts on the first half of the season largely focused on the alternating point-of-view structure, and how Sarah Treme and Hagai Levi use it to explore some fundamental truths about subjectivity, storytelling, identity, and the difficulties of true connection.

All those things are still in play, of course, in this rich, multilayered work. But, in the back half of The Affair's first season, the structural "gimmick" has become less important: it's still there, and it still yields interesting observations and discrepancies from time to time, but it's no longer the show's central preoccupation. In fact, in just a handful of episodes, the split POV structure—jarring, at first, and then fascinating—has come to seem normal, even essential, to the telling of this story. The danger of this show's premise was always that the conceit would eventually seem a tiresome novelty item, but that hasn't happened: Levi and Treme wisely knew that their unusual narrative approach was a tool to use, not a gimmick to rely upon, and that the show would ultimately live or die with the story being told, not the format of its telling.

Episode Eight continues to do some interesting things with the format, but they are things we've seen before. Alison's catering uniform is a tight black dress with a plunging neckline in Noah's memory of the event, a demure button-down shirt in Alison's own. Noah, in turn, is dressed differently in each version: he is crisp and clean and wearing a tie in Alison's mind, while his image of himself is tieless and more disheveled. In this first meeting since ending their affair, the question of who first approaches who is a matter of contention, as is the issue of Noah's actions surrounding the death of Alison's grandmother. (In his version, he is more matter-of-factly heroic, waking Alison up in time to say goodbye to the old woman; in her version, his major contribution is to listen, and understand, and say the things that Alison needs to hear.)

But these differences no longer seem like things to argue about, or choose between, or reconcile. Rather, they seem like different facets of this relationship turned to light by each of them, different ways in which they see each other being prioritized, different value judgements about what is and is not important. The he-said/she-said doesn't feel contentious, but holistic: it is not in a choice between these accounts but in an uncertain, ever-shifting synthesis that we begin to grasp the essential truths of this relationship.

So, though I can't promise I won't return to my obsession with the narrative style of The Affair—I am a lit-geek at heart, after all—it's not feeling like the most important thing to talk about this week. Rather, I want to think a bit about the themes that are interwoven through the various storylines this episode, and how they reflect on each other and the story as a whole. 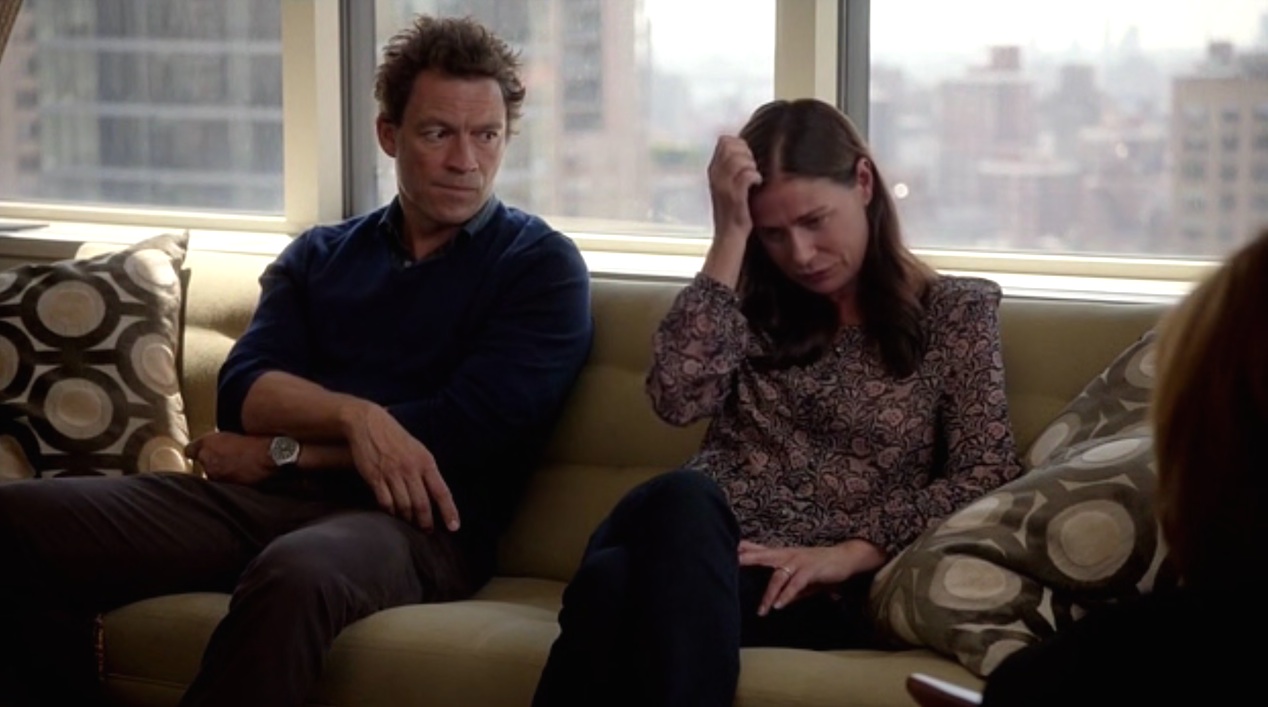 Following Noah's confession of his affair last episode, we have jumped forward four months to find Noah and Helen "sticking it out." They are in couples-therapy (with the fabulous, and criminally underseen Blair Brown), and they are trying to repair their marriage. "I've taken all your fury," Noah says to his wife. "All I want is to move on."

I have to stop for a moment to say something about Maura Tierney's performance, which is just staggeringly good. This could be a thankless role in a lesser actress's hands, but—thanks to Tierney's rich embodiment of this character—our relationship to Helen as audience members is delightfully complicated. She is simultaneously perfect and alienating, sympathetic and dislikable, wholly blameless and yet strangely culpable. In comparison to the two leads, Helen is an underwritten role, and it would be easy for her to degenerate into a one-note character, either victim or villain. But Tierney never allows that to happen: Helen is a real person whose point-of-view we just never happen to see, and there's a lot going on inside of her. (The scene this week where they have dinner—and Noah gives her the necklace—is perfectly played by Tierney: she is outwardly upbeat, even magnanimous, while simultaneously punishing him, and while being, inside, nearly physically revulsed by this gift that would be a constant reminder of her husband's infidelity.)

And the speech she gives Noah in the therapy session is unspeakably brutal. "Do you know why I married you?" she asks him. "Because you love me?" he offers, hopefully, but of course that's not the answer:

"I thought you were safe….I could have had anyone, when I was young…And I chose you. And I knew you were never going to be President, or famous, or rich, but I didn't care about that…I knew you would never cheat, and you wouldn't leave, and you would be a good father, and we would have a nice life, and we would grow old and die together, and everyone would talk about how lucky we were, and what a smart choice I made."

It's a cold, punishing, but remarkably self-aware blow, which falls all the harder because it's not a revelation. ("Do you think any of this is news to me?" Noah asks.) The Affair is one of the best shows on television at dealing with the tricky, ever-present subject of class, and Helen is a wonderful example. There are funny moments of ridiculous disconnection, as when Noah complains that Helen sends their five-year-old daughter's clothes to the dry cleaner. ("The French ones, yeah!" Helen responds, exasperated.) But there is also a deeper, more subtle recognition of the complexities of privilege and status, and how Helen is herself a creation of forces beyond her control. 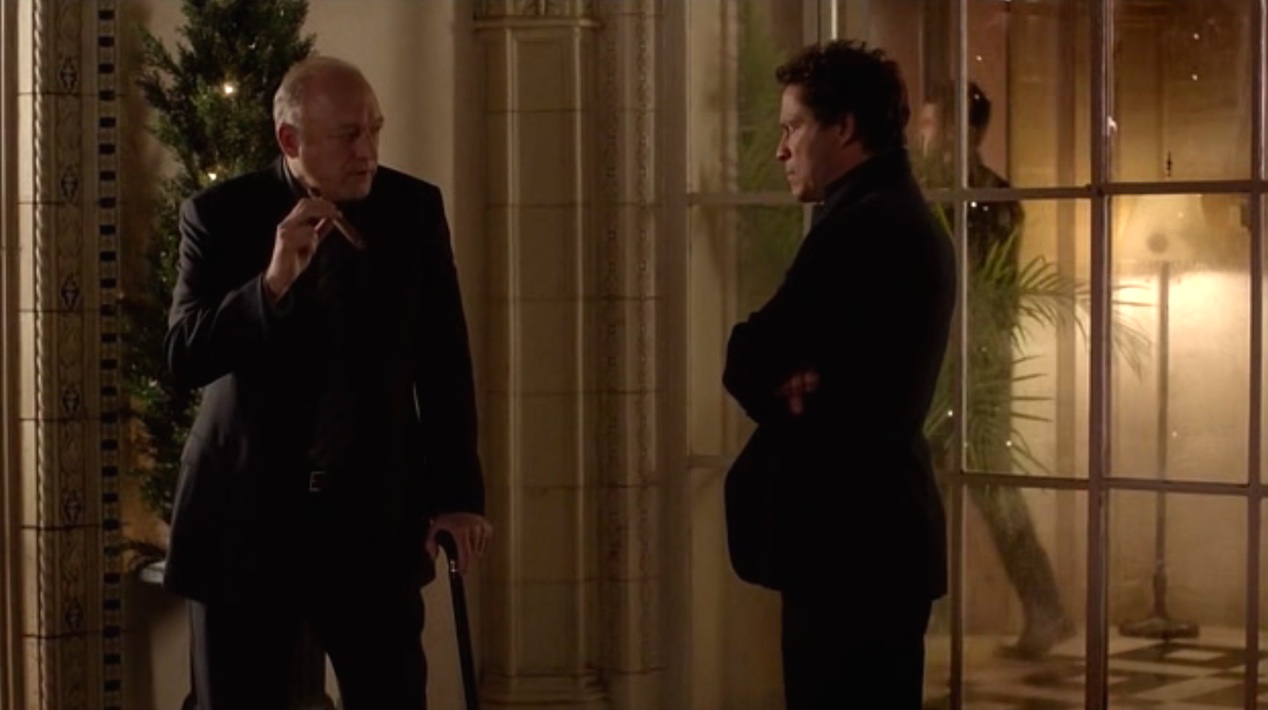 One of those forces is her parents' marriage, of course, and we get the direct parallel this week in Bruce's confession of the affair he once had with a student. "She lit me up," he says. "I felt like I'd been sleepwalking my whole life, and suddenly I was wide awake." But he sacrificed this chance at real happiness on the altar of appearance and status, unable to imagine giving up his outwardly perfect life with Margaret for a poorer, less impressive existence with the woman he actually loved. ("Do you still think about her?" Noah asks him. "Every fucking day," Bruce admits.)

Happiness, The Affair makes clear—not for the first time—is a choice, and a choice that is often at odds with propriety and morality. (I love the fact that it's two loathsome people—Helen's father and Alison's mother—who serve both as vehicles for this message and as cautionary tales about accepting or rejecting it.)

The right thing to do isn't always clear, because "rightness" is a quality that can be measured in a lot of different ways. Helen and Noah are trying to stick it out, but is that the right thing to do in the end? Because the opposite of "sticking it out" is "letting go," and that's the theme picked up in the second half of this episode, as the point of view switches to Alison.

This theme of letting go plays out in a couple of different ways. In a minor key, we find it in the Lockhart family's preparations to sell the ranch; various family members are sorting through possessions and deciding what to keep and what to throw away, and Cherry may be actively—albeit subconsciously—sabotaging the sale.

In a larger sense, however, we have the death of Alison's grandmother (Lynn Cohen), and the different approaches Alison and Athena take to it. When Alison's grandmother has a heart-attack, Alison is determined to keep the old woman alive no matter what, but Athena argues that it's time to let her go. "We need to honor what is happening here and make this part of her journey as peaceful as possible," Athena says. "At times like these we need to act from our higher selves," Athena says.

As I've said before, Athena is one of my favorite kinds of characters: the absolutely terrible person who nevertheless speaks almost nothing but truth. She is selfish, she's self-obsessed, she's absolutely full of new-agey shit, but she's right. When Alison refuses to sign a DNR order for her grandmother, a second heart-attack leads to further trauma and suffering for the old woman. "Do you know what it looks like to see a pit crew of Western medicine professionals trying to jump-start a heart that is done?" Athena asks.

It's that line that ties this sub-plot into the larger episode and the story as a whole: what are Noah and Helen doing besides trying to jump-start the heart of their marriage? What are Alison and Cole doing, in trying to have another baby? "I need to know that I'm not making a mistake," Alison tells Noah about her grandmother, but it's a larger question than that: how do you know when it's right to fight for something, or when it's right to let go because it's done? 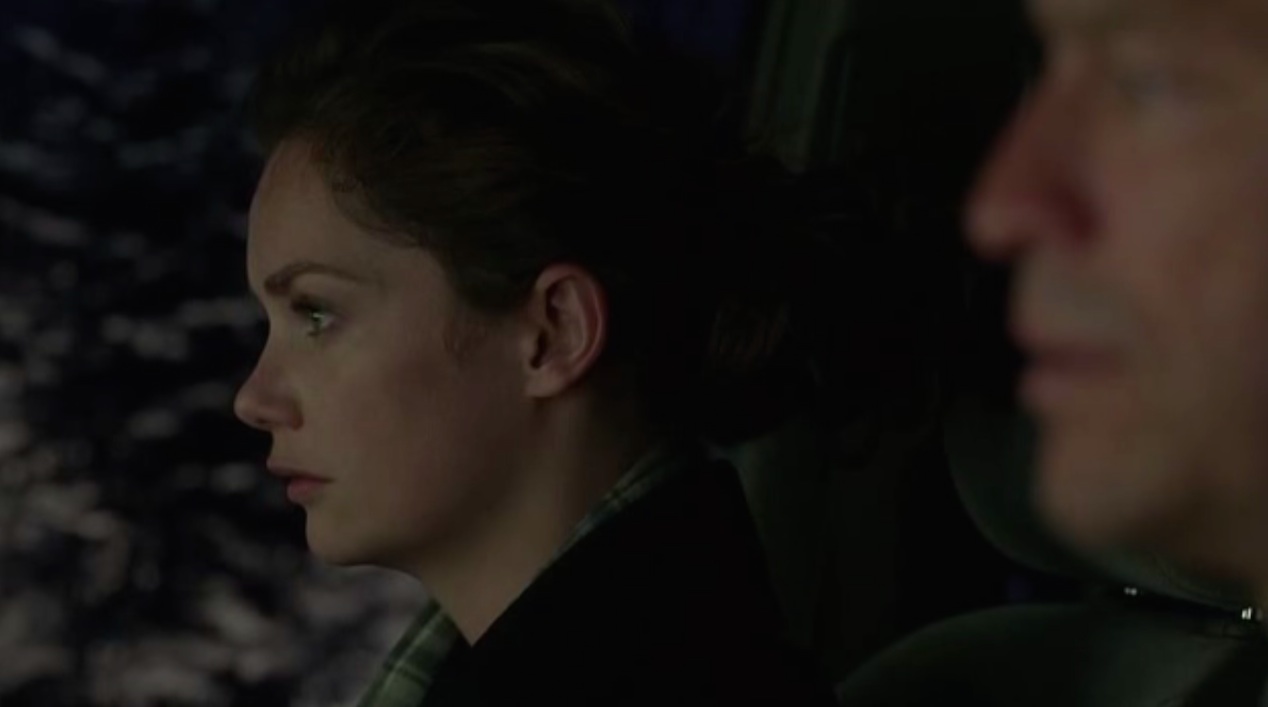 The show is too subtle to draw a big bow around these parallels, but the larger implications are clear: "sticking it out" is admirable, but it's not always the right thing. Are Alison and Cole really going to be better off staying together, clinging to hope, desperately trying to jump-start their hearts under the cloud of grief and hopelessness that has engulfed them? Are Noah and Helen better off "sticking it out," for the sake of pride and appearances, as they hammer away at each other and eventually become Bruce and Margaret?

It may feel like hell, but sometimes the best, kindest, most compassionate thing you can do—for yourself, and for the people around you—is let go. Though unspoken, it's this realization that allows them to finally admit what has been obvious for quite some time. "I love you," Noah tells her. "I love you too," Alison responds. They have begun to let go of their wounded marriages, let go of their illusions, let go of their adherence to propriety and appearances and their own previous identities. In doing so—as we see in the final scene, as Alison is finally able to look inside Gabriel's toy chest—they may finally be able to salvage some true hope of happiness out of everything that has come before.