First Look/Last Look is a series in which I check out the pilot episodes of new TV shows. While I always hope I'll find something I will want to add to my regular viewing—if not reviewing—schedule, I’m not holding my breath. Call me pessimistic, but, in most cases, I expect my first look to also be my last.

If you haven't done it already, it may be time to spring for that subscription to Showtime. The first episode of The Affair, the network's new 10-part series from executive producers Hagai Levi and Sarah Treem (In Treatment), is the best pilot I've seen so far this season—by rather a large margin—and the first to be doing something genuinely interesting with the television form.

I'm hesitant to say too much about it here, however, because the best way to experience this hour of television may be the way I did: knowing virtually nothing about it except the premise revealed in the title. For the first half of Episode 1, in fact, I was only mildly interested: The Affair seemed like a well-made, intelligent drama with an admirable attention to detail and a slightly worrisome tendency towards sensationalism. At the halfway point, however, everything changed, and the show became something much more intriguing: the real conceit at the center of The Affair was revealed, and it not only redeemed the apparent weaknesses in the first half but actually showed them to be features, not bugs.

(I am going to discuss this conceit—it's not really a spoiler, since the pre-publicity for the series has been very open about it—but if you want to get out of this review completely unspoiled, now is the time.) 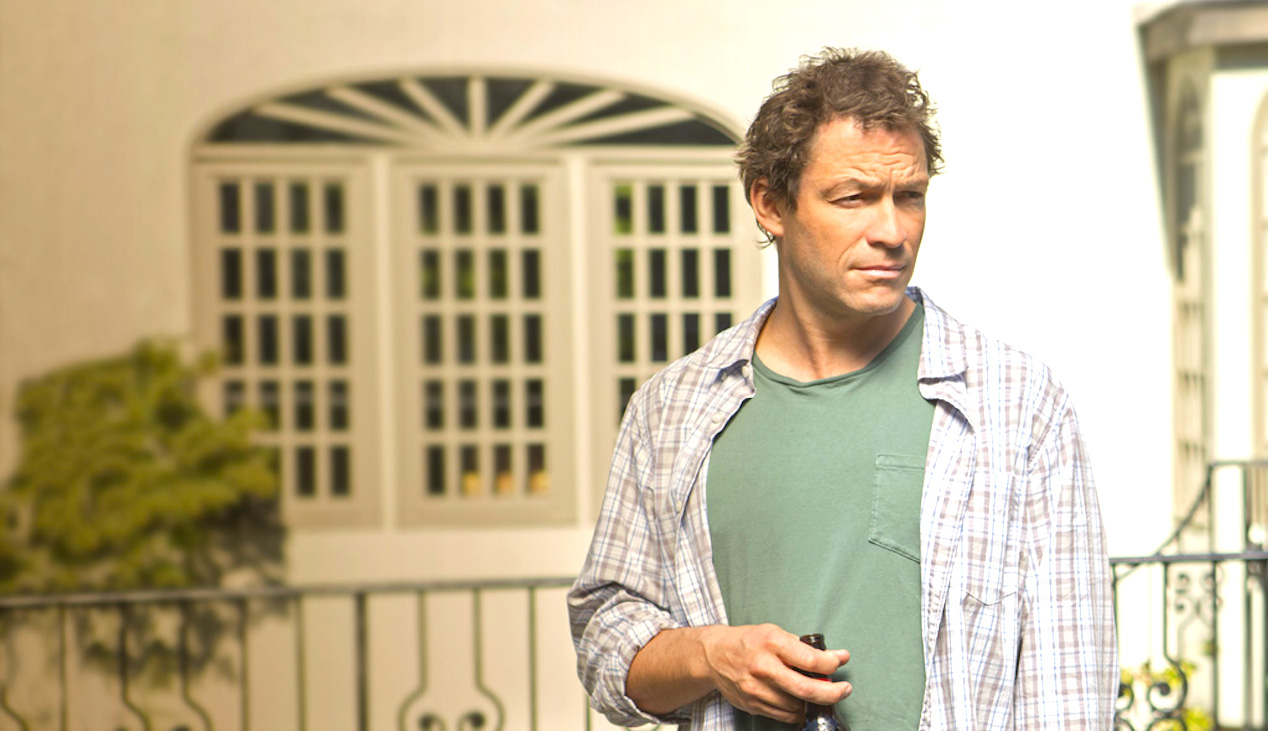 Noah Solloway (Dominic West) is a public school teacher and aspiring writer whose first novel has achieved only mild success. ("I enjoyed most of it very much," he is patronizingly told by his rich and successful father-in-law, played by West's old sparring partner from The Wire, John Doman). Noah is married to Helen (Maura Tierney), and together they have four children and a lovely, realistically cluttered brownstone in New York. "My children were healthy, my wife was beautiful, my life was pretty fucking perfect," we hear Noah say in voice-over, answering questions as part of some interrogation yet to come.

This flash-forward framing device isn't explained here—we don't yet know who is asking the questions, or why—but it's important, both because it promises serious consequences for the drama we're watching unfold, and because it establishes that everything we're seeing onscreen is Noah's recounting of events. We don't—at this point—have any reason to question his account, but it creates an interesting dynamic. On the one hand, what we are seeing is fantastically realistic and believable: from the beginning Noah and Helen seem like real people, in a real marriage, in a way that is rare for television. (The casting of Maura Tierney here is a masterstroke: she brings a wonderful warmth and authenticity to Helen, even in this first episode when she has little to do.) We recognize their relationship, and the rhythms of their family's life together, and in its own way it does seem perfect: not Hollywood perfect, but real-life perfect, which is to say messy, and genuine, and reassuringly imperfect.

And yet there are moments that grate against this realism a little, which made me—at first—worry about the overall vision of The Affair. A strange incident with oldest son Martin (Jake Richard Siciliano) rings sensationalistically false, as though inserted for phony drama. The same is true of a near-choking incident in a restaurant with youngest child Stacey (Leya Catlett). And, though it's believable enough the first time Noah and Helen's seemingly healthy sex life is interrupted by their children, by the second time it happens we are tempted to roll our eyes at this incessant cock-blocking conspiracy. We get it, marriage is hard, and parenting is stressful, and it's hard to sustain the romance, we think. Though presented with some subtlety, it all seems a little too conveniently arranged to offer some justification for why this man might be tempted to stray.

And so we are not surprised when—while beginning their summer vacation at Helen's parents' estate in Montauk—Noah meets Alison Bailey (Ruth Wilson), an attractive waitress. They first connect during the choking incident, and she seems moved at watching Noah save his daughter's life. Later, he meets her again during a late night walk on the beach, and she asks him to walk her home, flirting aggressively and tempting him to join her in the outdoor shower of her ramshackle beach house.

It is at this point that The Affair starts to worry me the most: though this Cheeveresque tale is presented with impressive texture and nuance, its point of view seems fatally male, with the subtly oppressive nature of Noah's happy home life layered on a little too thickly, and with Alison seeming too seductively (and reductively) a fantasy object of temptation.

And then a title card appears on the screen, reading "Part Two: Alison," and everything changes. 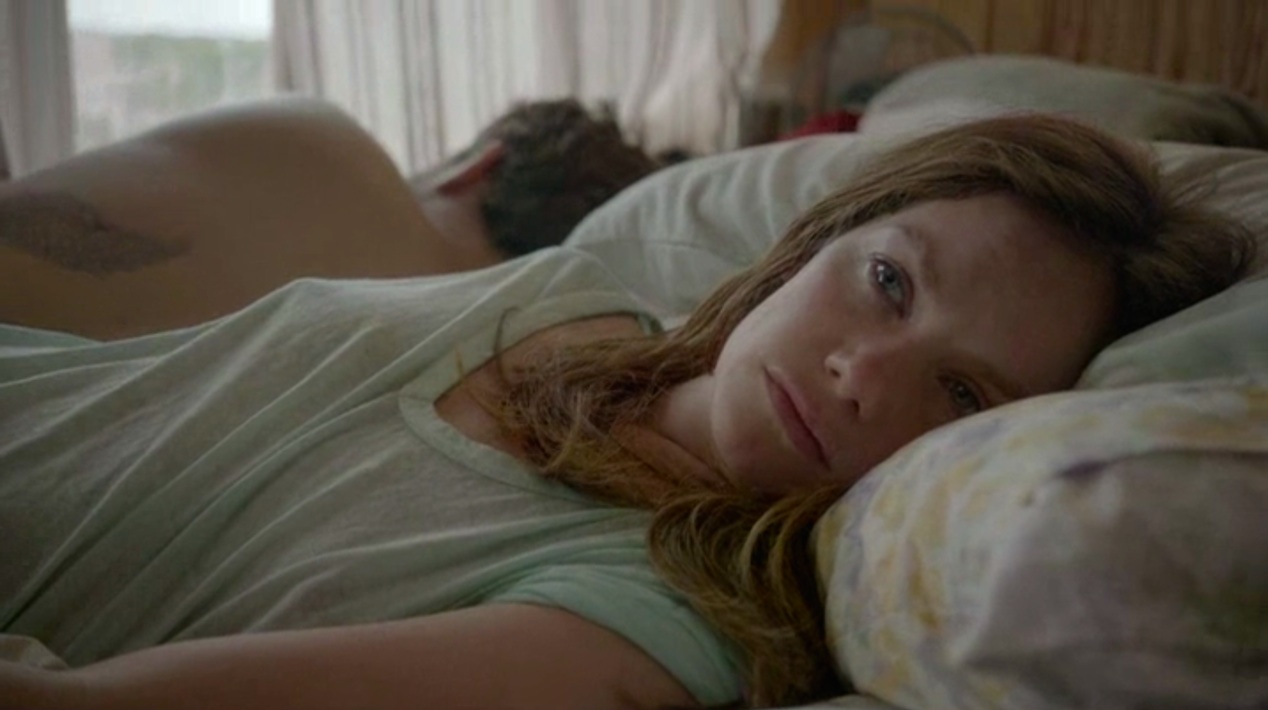 Now we are in Alison's point of view, and she seems almost a different person from the vivacious, flirtatious woman we met in the first half of the episode: she has a more haunted expression, a more crumpled carriage, a more damaged countenance. We see her go through her day, waking up with her husband Cole (Joshua Jackson), and we feel the weight of something terrible between them even as they make love, an emotional gulf through which they can't quite reach each other. (The sex scenes in this show are impressively real, and we haven't even gotten to the titular affair yet. For all the sex we see on TV, it is a subject rarely done justice, most often used as shock or titillation or phony montage celebration. Based on this episode, I have high hopes that The Affair will explore sex as a complicated interaction between characters, one in which a lot of important emotional stuff happens, some of it subtle and wordless and absolutely essential.)

We follow Alison to the restaurant, and realize we are now seeing the same day play out from her point of view. Events begin to overlap with what we've seen earlier—Noah's family entering, the child choking on a marble—but now the narrative shifts in important ways: it is Alison who saves the child's life, not Noah. Later, on the beach, we see their second meeting play out, but here it is Noah, not Alison, who suggests he walk her home, and it is he, not she, who begins to flirt. The fantasy seductress is gone, and we are confronted with a real woman standing in her place.

This Rashomon style of alternating, varying points of view is the central conceit of The Affair, and it's potentially a brilliant one. From the moment we switch to Alison's story, we begin to question everything we saw in the first half of the episode, which we now fully understand to be Noah's memory of events, his subtly self-justifiying spin on the beginning of this affair. Thus the show is constructed as something of a mystery, with the framing device of the interrogation—we hear Alison's answers as well—practically daring us to weigh the evidence and take sides.

But what really intrigues me about this show—based at least on this extraordinarily strong first episode—is that it promises to do so much more with this structure than a simple He said/She Said debate. For though we are instantly forced to question Noah's version once we hit the counterpoint of Alison's, we also find ourselves wondering why we should privilege her version any more than his? Is he lying? Is she lying? Or, more interestingly still, are neither of them lying, but honestly presenting the narratives of their own lives, the stories of their own actions and decisions, that they have constructed as best they are able? Is there an objective truth at all, or are there simply the stories we tell ourselves?

This is rich and potentially rewarding ground for a television series to explore, touching not just on simple dichotomies of male and female viewpoints, but also on larger, more complicated issues of how we all construct our very identities, and the limitations of our ability to really see other people. We are all the heroes of our own stories, and it may be impossible to really see and understand another person—even, or especially, a person we love—as anything more than a fiction we have constructed. Levi and Treem—who are writing every episode—seem to understand this, and seem so far to have the sophistication and sensitivity to do wonders with this structure in which two equal, simultaneous, subjective narratives unfold in parallel.

And though it is easy to imagine this structure being simply a gimmick with the wrong actors, the two leads here are exceptional, and they turn the challenge of the shifting viewpoints into an opportunity to do fantastic things. West is very good, as always—his same boyish mannerisms shading innocent one moment, slightly manipulative the next—and Wilson is simply amazing: on the first watch her transformation in the second half seems like a different person altogether, but watching the episode a second time we can see that she is playing one woman, not two, turning different facets to the light as needed. Both actors seem to understand that—by playing both the people they are to themselves, and the people they are to each other—they are not presenting contradictory images, but finding a stunningly holistic new path to character development.

Honestly, my only concern about this show at the moment is whether it can sustain the quality of this intelligent first episode, and fulfill the promise of its remarkable ambitions. The story of infidelity between two fundamentally good people is nothing new, but I have a feeling Levi and Treem are using this familiar storyline, and a clever narrative device, to explore larger questions of human perception, sympathy, and identity. These kinds of questions have largely remained the purview of the novel—which handles subjectivity and ambiguity better than the all-seeing camera's eye—but if Levi and Treem pull this off they may expand our sense of what television can do.

It's possible, of course, that my expectations are too high, and I'm setting myself up for disappointment. But—based on this first hour—The Affair may turn out to be something very special indeed.

When Is It On?

Sundays at 10/9c on Showtime. An edited (TV-14) version of the pilot episode is available to watch for free at www.sho.com/sho/home.

Will I Keep Watching?

Absolutely. And so should you.

Will I Keep Reviewing It?

Yes: if this is the show I think it is, it's the kind of show that makes me excited to write about television in the first place.

I hope so: Showtime has committed to the first, 10-episode season, but Levi and Treem clearly have plans for a true long-form story that can explore these characters over several years. That's something television is uniquely qualified to do as an art form, and it's going to depress the crap out of me if they don't get a chance to do it.