Those of you who have been reading my reviews this season know that I have a very tentative relationship with The Walking Dead. It is, perpetually, a show I like but can never quite love, stuck eternally in that frustrating limbo where it always feels like it's just about to get good.

Part of the problem, as I've said before, is that the show still hasn't figured out how to develop its situation (zombie apocalypse) into a story. The characters are not driven by any goal or purpose other than basic survival, so, from week to week, they are either trying not to get eaten, or they're just sitting around enjoying the fact that, for the moment, no one is trying to eat them. There's a reason zombie movies, or slasher films, don't last 14 hours: there simply isn't enough plot to be found in an endless siege story.

(There are times when The Walking Dead reminds me most of the film Open Water, in which a married couple find themselves alone in the ocean surrounded by sharks. It's an admirably simple premise for a horror movie, but even at 90 minutes it more than exhausted the narrative potential of its situation. There's just nowhere to go, and nothing to do: all you have are long periods of bickering boredom, punctuated with occasional shark attacks. After a while, all you're doing is treading water.)

The Walking Dead compounds this problem by insisting on a plodding, incredibly linear form of storytelling. Returning from its mid-season hiatus this week, the show picks up exactly where it left off last November: with the debacle at Hershel's Zombie Petting Zoo, and with Rick standing over Sophia's body. While I understand the desire to deal with the immediate fallout of this devastating event, I can't help but feel this choice was a mistake: if any show could benefit from a little narrative flexibility, it's The Walking Dead. How exciting would it have been to tune in this week and find ourselves somewhere new? To find that several months had passed, and the survivors were somewhere else, and that the events of "Pretty Much Dead Already" had changed dynamics and relationships in ways we'd have to piece together for ourselves as the story unfolded?

But no, instead we find that we've been away for three months, but Rick and the gang are still on the goddamned farm. They are still in the exact same place, still having the same exact same debates they were having during the first half of the season, still treading the same narrative water. The only difference is, we've lost what little narrative momentum we had—the search for Sophia—and so we're right back where we started, only things are a little bit suckier. Rick is questioning his own leadership (yawn), Shane is being a borderline-psychotic pragmatist (still), Lori is being shrill and unreasonable (inevitably), Maggie and Glenn are squabbling about their relationship (always), and Daryl has retreated back into hostile self-reliance (again). It's all just getting a little old. (It would be difficult to underestimate how much I care that Lori crashed her car.) 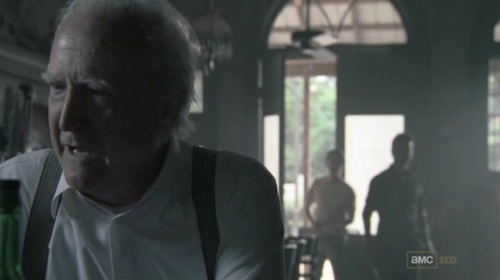 As I've discussed throughout, I've stuck with The Walking Dead because I admire its existential nihilism: there's something noble about human beings struggling to survive—and to maintain their humanity—through what appears to be a completely hopeless and godless existence. The end of the mid-season finale—as I discussed—brought this theme home with brilliant cruelty, and this week just reinforces the point. Hershel is a religious man, our best embodiment of Christian values. He kept his zombified family members and neighbors in his barn, feeding them and keeping them safe, because he had faith that there was hope for them. He took in Rick and the other survivors because it was "the Christian thing," and he says that saving Carl's life was "the miracle that convinced [him] miracles do exist."  Now, however, he's convinced that it was a "sham," and Rick and his friends are a "plague," and Hershel himself has been a fool. "There is no hope," he says. "You know it now, like I do. There's no hope for any of us."

I continue to enjoy this exploration of hopelessness, but if you're sick of hearing me discuss it every week, then trust me when I say I'm sick of having nothing else to discuss. Yes, we get it, it's about how you survive once all hope has gone. And? It's a worthy conversation, but we've just been over all of it so many times before.

That's why the last ten minutes of this episode felt like a breath of fresh air blasting through the lingering stench of burning corpses and stagnant dialogue. Hershel's loss of faith has sent him on a mild bender, and Rick and Glenn go into town to find him at an abandoned bar. Just the change of locale was a step in the right direction here—finally, a new set!—but the episode really kicked into life with the arrival of Dave (Michael Raymond-James) and Tony (Aaron Munoz). New people! With new accents! 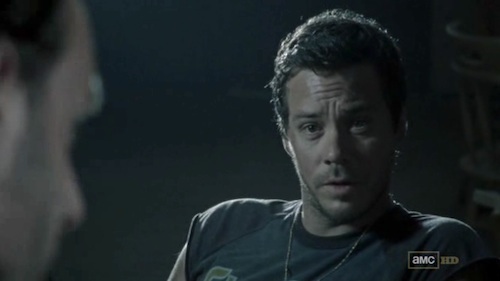 The new accents are important, I think: until I heard Dave's citified cadences, I hadn't realized how universally everyone spoke in a southern drawl. Strangers are always a threat on The Walking Dead, but Dave and Tony—who hail from Philly—represent an invasion of street-smart Yankee thuggery into this insular atmosphere of southern gentility. (They don't like the heat, they're disdainful of "flyover states," and they piss on the floor: they're northern barbarians.) Dave doesn't say anything particularly menacing, but from the moment he opens his mouth he sounds like a hustling city-slicker, and he puts Rick and Hershel immediately on edge. There is fantastic tension in these final ten minutes of the episode, thanks mostly to a wonderfully insinuating performance from Raymond-James (a star of the much-lauded, short-lived Terriers, which I confess I haven't seen). It may be the end of humanity, but there are different ways to deal with it, and Rick and his friends quickly—and wordlessly—decide these others just don't belong. (In case we miss the contrast, the scene frames our three familiar characters beneath a Confederate flag.) 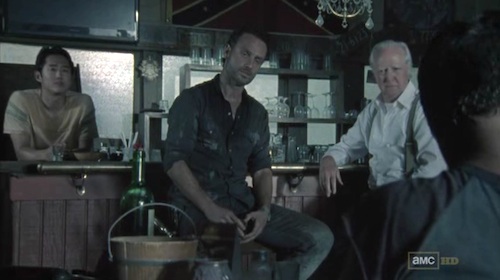 Sadly, Dave and Tony do not last long: Rick is provoked, but he seems almost relieved to have an excuse to blow them away. From the previews for next week's episode, however, they have friends, which is a very promising direction for The Walking Dead. From my very first review I've been arguing that the show cannot survive on zombies alone to propel the plot forward. The zombie apocalypse is a backdrop, not a story: the show desperately needs additional threats and opportunities to keep the narrative moving. Those who have read the comic books know that it is usually other people, not zombies, who constitute the real danger, as Rick and the gang encounter different colonies of survivors who all have their own values, their own rules, their own ways of responding to the crisis. Coming across other survivors is fraught with danger; finding a safe haven can mean other people just try to take it away.

Though the first forty minutes of "Nebraska" just offered us more of the same, the last ten minutes of the episode give me hope that the show is moving in this promising new direction.

NOTE: Due to time constraints (and slightly flagging interest), I'll be suspending my reviews of The Walking Dead for a little while. I'll circle back to discuss the last half of this season after the finale on March 18.