In my very first post on American Horror Story—it feels like years ago now—I suggested that the worst thing that could happen to this show would be for it to get a little better. A slight improvement, I worried, would mean that the show would risk "losing all of its unintentional comedy and becoming simply a turgid horror anthology with pretensions."

I think that's exactly what's happened, for me at least, over the last couple of episodes: American Horror Story has gotten a little better. Not a lot better, mind you—not enough to be considered great television—but just enough so that it isn't quite so much fun to tear apart.

I know, I know, I complained about all that shit too. (Man, I'm just impossible to please.) But that shit—while unquestionably shit—was good shit. It was fun shit. It was the shit that made me tune in every week, if only to comment on the bouquet, the vintage, the unexpected and delightfully piquant flavor of the shit we were being served.

"Birth," on the other hand, follows in the example of last week's "Smoldering Children" by being…well, not bad, really. Written by Tim Minear—who last wrote "Halloween, Part 2" (and to whom I'm eternally well-disposed because of his involvement in Firefly)—"Birth" has an actual structure (rare for this show), it ties its threads together logically and with purpose (ditto), and—by American Horror Story standards, at least—is downright tasteful and restrained. (Granted, a gigantic antichrist baby kills its mother on the way out of the womb—but, you know, tastefully.) 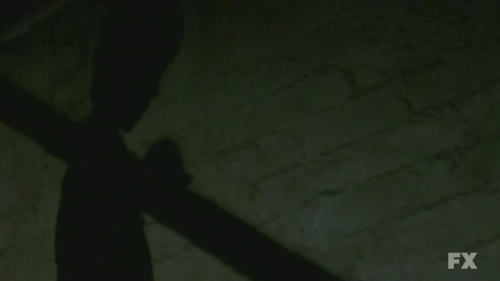 Directed by Alfonso Gomez-Rejon—who last helmed the equally tight "Home Invasion"—"Birth" also delivers some spooky atmosphere, if not some outright scares. One of my complaints about American Horror Story all season has been that it is often gross, and frequently shocking, but hardly ever scary. But "Birth" has a number of sequences where the show at least seems to remember that it's supposed to be a horror show. The opening sequence—in which a young Tate (Paul Butler) ventures into the basement and encounters Thadeus/Infantata (Ben Woolf) for the first time—is rushed but wonderfully creepy. (There are some really nice shots here, including the shadow of the child descending the staircase, the way the yellow of his Tonka truck stands out against the shadows, and the way Infantata's face seems to slowly develop out of the darkness.) Tate is saved by Nora (Lily Rabe), who teaches him that the way to get rid of monsters is simply to close your eyes and say "Go Away."

This opening scene also establishes the baby-mania that runs throughout this entire episode, as everyone wants whatever it is that's in Vivien's ballooning belly. Nora and Hayden (Kate Mara) each want a baby to replace the ones they lost; Constance (Jessica Lange) and Moira (Frances Conroy) want Tate's child for some nefarious, as yet undeclared purpose; Chad (Zachery Quinto) and Patrick (Teddy Sears) want the babies to save their eternally disintegrating relationship. Even Violet (Taissa Farmiga) is coming to terms with what life as a ghost in Murder House will mean, and putting it in baby-terms: "Nobody here is happy, Tate," she says to her ghostly boyfriend (Evan Peters). "We'll never have kids."

(Of all the would-be adopted parents, Chad and Patrick—seen decorating the nursery throughout—are the most amusing.  I enjoyed seeing Quinto and Jessica Lange duel each other in a campy bitch-off, and I adored the line that revealed what Chad and Patrick's plan for the babies entails: "Raise them? Oh, honey, no, no, no. We're going to wait until they reach that perfect, adorable age—about a year, year-and-a-half or so—and then we're going to smother them with hypoallergenic pillows. That way they'll be cute forever.") 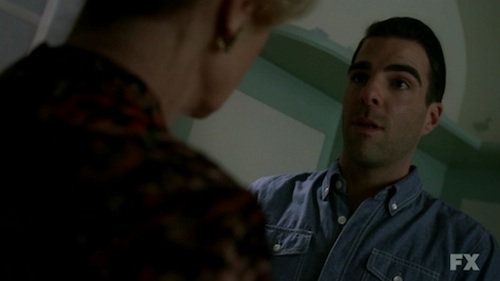 Discovering Chad and Patrick's agenda, Violet tries to call in what I've been suggesting for weeks: an exorcist. Unfortunately, Billie Dean (Sarah Paulson) is just enough of a psychic to realize Violet is dead, but not enough of one to have any useful advice about ridding the house of its ghost infestation. (The Verminator might be of more use here.) Her pointless retelling of the famous Roanoke mystery yields no practical advice, as the word "Croatoan" has no effect on Chad.

What does work—at least temporarily—is Nora's advice: when Violet discovers the truth about Tate's assault on her mother, she realizes what has been obvious all along: this guy is not really a Tiger Beat Dream Date. "Your man does love you," Chad tells Violet, when he spills the beans about her mother's rape. "But he'll always be a monster." So Violet deals with Tate, finally, the way you deal with all monsters: she closes her eyes and tells him to go away, creating a nice symmetry with the opening of the episode. Tate, who was once the one scared of the things in the dark, has become one of them. 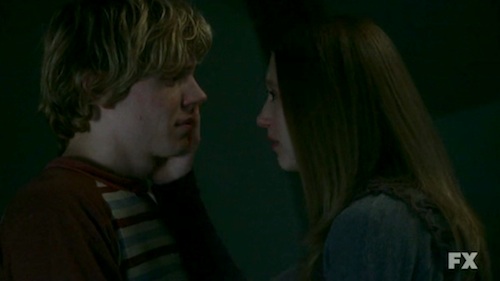 And so, too, have Violet and Vivien. The bulk of "Birth" is dedicated to the titular event: when Vivien goes into predictably premature labor in the driveway, Ben (Dylan McDermott) doesn't seem to question the presence of Dr. Montgomery (Matt Ross), or the dead nurses from Episode One, or the makeshift operating theater that has been set up in his living room. ("This house is trying to help," Constance tells him. "And right now you are in no position to refuse.")

The birth scenes are well staged, with creepy candlelight and hallucinatory camera angles but a surprising lack of overt gore. (I'm surprised American Horror Story denied us the more gratuitous shots, but relieved: I expected to see a gory shot of something that looked like Tim Curry in Legend peeping out from between Connie Britton's splayed legs, but some very quick flashes of blood-splattered sheets were far more effective.)

The first baby—which we assume, but don't know for sure, is the weaker, human child—is declared stillborn, and ushered quickly into the arms of Nora. (Whether it's really dead or not we don't know either—but, in this house, does it make any difference?) The second baby—the antichrist child of Tate?—is the one that lives, but Vivien does not survive the delivery. (It's a nice scene here, where Violet appears at her mother's bedside, and the two make their peace.)

Vivien's afterlife reunion with Violet is bittersweet—I like that, even as a ghost, she immediately goes into maternal mode, comforting Violet. (When, in the final moments, she hugged Violet and said, "I didn't lose my baby," I got warm, momentary flashbacks to Tami and Julie Taylor in Friday Night Lights.) On the other hand, as much as I love Britton, I feel fairly unmoved by Vivien's death: the reveal of Violet's death last week was a powerful moment, but killing Vivien just doesn't have the same impact. For one thing, the character of Vivien just hasn't been developed as strongly; for another, the show has made being a ghost so commonplace and tedious that death just seems like an annoying inconvenience.

So where does all of this leave us, going into next week's season finale? With a lot of ghosts squabbling over ownership of the babies (dead or alive), and with Ben the only family member still breathing. On this last point, I hope he stays that way: I can put up with Vivien and Violet taking up permanent residence on American Horror Story—though I think both the actors and the characters deserve better—but surely no one wants to see another season with Dylan McDermott in the house. I suspect, and hope, that Ben will get hauled off to the loony bin, incurably insane and blamed for the deaths of his wife and child. (Don't be surprised if he ends up at least half-burned as well: this show does like its symmetry.)

I have more to say about all of this, and how the Harmon Family story has played out, but I'll wait for next week's finale, since a lot will depend on how permanent a resolution we are moving towards. The rumor is that Season Two of American Horror Story will be a full reboot, but what does that mean? Does it mean a new family moving into Murder House, where at least some of the ghosts—and perhaps Constance—will remain? Or does it mean leaving the house and its entire cast of characters behind? (I imagine it's the first, but I hope it's the second, as I feel like the device of the house is one of the major problems that's plagued the show all along: right now the series is mired and moribund in its single location, and requires the constant influx of new ghosts and new characters that gives it that Love Boat quality I mentioned last week.)

Mostly, I hope the show either brings in some new characters and makes us care about them, or embraces its natural state as a campy, tongue-in-cheek freak show. "Smoldering Children" and "Birth" are good examples of the show reaching the limits of what it can achieve with the current format: they are probably as good as this show can do right now, but they're not really good enough. However well-executed these later episodes are, the lack of believable characterization and the massive tonal shifts that have plagued the show all season make reaching for the big emotional moments now a real stretch.

American Horror Story began by promising an extended metaphor about a deteriorating marriage and family that it has never fully delivered: the Harmon story has never really worked, and so the larger emotional moments never quite have the impact the creators intend. I appreciate the effort, and these last couple of episodes do hint at what a better, slightly rejiggered show might look like. But if American Horror Story can't do a better job of building an emotional and thematic foundation in Season Two, I'd rather just have brain eating and pig men.