In “First Look/Last Look,” I am doing quick reviews of selected new fall shows, panning for gold in the fetid riverbed of the 2011-2012 network television season. While I hope this experiment yields at least one new show that I will want to add to my regular viewing—if not reviewing—schedule, I’m not holding my breath. Call me pessimistic, but, in most cases, I expect my first look to also be my last.

At the moment, I'm categorizing this review as part of my "First Look/Last Look" series, meaning American Horror Story (Wednesdays, 10PM EST on FX) is not a show I'm going to be reviewing regularly. But the truth is, after being appalled by the first episode, I still went back for the second, and I'm really not sure I'm going to be able to resist writing about this from week to week. American Horror Story is so bad, so over-the-top and batshit-crazy, that it's almost irresistible.

Stupidly pretentious, embarrassingly unrestrained, and chaotically unfocused, this is a basic cable Hell for good actors who have made bad choices. It's a fiasco, but it's kind of fascinating, and way, way more fun that it has any right to be.

American Horror Story was created by Ryan Murphy and Brad Falchuk, who previously brought us the similarly Grand-Guignol Nip/Tuck and currently form two-thirds of the Gleetriumvirate. American Horror Story shares with those two shows a great many elements, including cartoonish characters, a blatant disregard for realism, and a fondness for creating big, preposterous moments that can either go very right or very wrong. I never got into Nip/Tuck, but I still watch Glee, and I watch it the same way I watch American Horror Story: enjoying the absurdity, engrossed in suspense to see how bad the train wreck will be from week to week, and waiting for the rare instances when all the plot flailing and emotional manipulation succeeds in creating a single moment that is truly moving or affecting.

American Horror Story centers on the Harmon family: Ben (Dylan McDermott), Vivien (Connie Britton), and Violet (Taissa Farmiga). Following a series of family traumas—including a miscarriage and an affair—the Harmons move from Boston to L.A., where they buy what any house-hunter would instantly recognize as the most evil and severely haunted house in the country. From the moment they pull up in front of the house to meet the real estate agent, it is impossible not to think of Eddie Murphy's classic critique of white people in horror movies.

But of course the Harmons take the house, and soon are stripping the wallpaper in the dining room to uncover the Satanic mural painted beneath. It doesn't seem strange to them that everyone they encounter after moving in stepped right out of a Tod Browning movie.

Jessica Lange, for example, is on hand to chew the scenery shamelessly as Constance, the aging Southern belle next door, who seems to know a great deal about the secrets of the house. Constance has a childlike adult daughter named Addy (Constance Brewer), who is obsessed with the house and tells everyone who enters "You're going to die in there." The great Frances Conroy is here, playing Moira, the severe and mysterious housekeeper—except that Ben sees Moira as a young and seductive hottie played by Alex Breckenridge.

There's a scary basement (at which, naturally, the dog keeps barking), which turns out to be home to any number of ghosts and at least one demon-clown-baby/elderly bat-boy (Ben Woolf, credited here as "Infantata"). There's a scary attic that contains a silent gimp in bondage gear (Riley Schmidt, as "Rubberman"). Ben, a psychiatrist, treats two patients in these two episodes, and both turn out to be homicidal maniacs: the first, Tate (Evan Peters), is a budding school-massacre serial killer with designs on Violet; the second, Bianca (Mageina Tovah), is a murder-groupie, and turns out to be casing the house for Episode Two's homage to home invasion movies. (It doesn't seem to bother the Harmons too much that all of these people seem to enter and wander the house at leisure.)

American Horror Story is every horror movie rolled up in one. The show has recognizable call backs to The Shining, Rosemary's Baby, The Amityville Horror, Poltergeist, The Strangers, Carrie, Psycho, and a dozen other movies, with—so far, at least—no recognizable  structure or point or overarching purpose. Falchuk and Murphy have just thrown every scary movie trope they could think of into a blender, and then hurled the resulting vile horror slurry at a high-speed fan to see how much of it will stick to our TV screens.

The question I always end up asking about any program is, "What is this show about?" I'm not convinced American Horror Story is anything more than an excuse to do mishmash horror stories every week, but it's pretentious enough that I'm curious to see what it thinks it's saying. Is it saying modern American life is simply Hell? (That seems to be one of its messages, since scenes outside of the evil house are just as horrible. Violet's high school, for example, seems to be an absurdly violent and dangerous place, more Caged Heat than Clueless.)

The show also seems to think it has something to say about marriage, since all of these horrors seem to have a clumsy metaphoric relationship to Ben and Vivien's dysfunctional domestic life. (In her very first scene, Vivien's doctor uses a tortured architectural analogy about how Vivien must tend to her body's "foundation." "I'm not a house," Vivien says, just in case we were going to miss the haunted house/dysfunctional family metaphor.)

Unfortunately, the characters are so ridiculous, and the writing so absurdly heavy-handed, that the "character drama" is laughable and impossible to take seriously. Ben wanders the house naked and masturbates while weeping; Vivien tells her daughter that she is scared of "everything: life will do that to you." In the middle of the first episode, Ben and Vivien have a fight—about his affair with a 21-year old student (Kate Mara), and the fact that they haven't had sex since the miscarriage—that is so excessively dramatic, clumsily expository, and ridiculously shouty that it becomes, unintentionally, one of the best comedic scenes of the season: 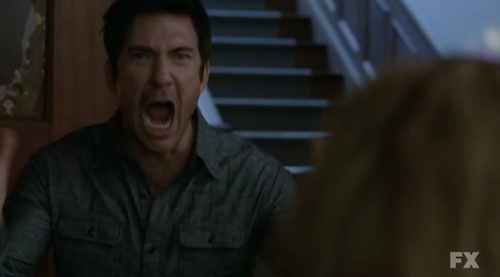 Ben: HOW LONG, Viv? How long are you gonna punish me for?

Vivien: I'm not punishing you, you narcissistic asshole! I'm trying to figure out how to forgive you for having sex with one of your students! You want me to have SEX with you? I can't even look at your face, Ben, without remembering the expression on it while you were PILE-DRIVING HER IN OUR BED!

Ben: I SCREWED UP! How many times do I have to say I'm sorry? I was hurting too!

Vivien: Oh, I'm sorry, I'm sorry. Did the life that was growing inside you die, and did you have to carry that around in your belly? The dead corpse of our baby son? Did you have to go into labor, and deliver our son, dead?

Ben: MY SON DIED TOO! My baby died too!

Vivien: You buried your sorrow in some 21-year-old's pussy.

Ben: You know, I could show you statistics about how many men cheat after a miscarriage. I was there for you, Viv. I was patient and understanding and caring. And I put your feelings first.

Ben: You know, I don't even know how to say this without coming off like an asshole—

Vivien: You know what, just go ahead. Really. Never stopped you before. You're so angry, why don't you really tell it like it is. Six months of therapy with you apologizing and crying was bullshit. So please, tell me how you really feel—

Ben: YOU GOT A DOG! I needed you, and you got a dog!It should have been ME you were curling up with, not a DOG!

Connie Britton is a fabulous actress—who never hit a single false note in five years of Friday Night Lights—and she almost succeeds in rescuing dialogue like this—but not quite. (And watching Dylan McDermott try to rise to her level by shouting more loudly is painfully funny. Spitting and gesticulating wildly is not acting.)

It may be too early to say this, but by the second episode of American Horror Story, the series seems to have established a formula: open with a flashback to some horrific event in the house's history, and then see that event reenacted in the present day, with each episode featuring a different genre of horror movie. (Haunted house in the first: home invasion in the second.) By the end of the second episode, the problematic conceit at the heart of the show—let's call it the Eddie Murphy Problem—is also glaringly obvious: why would anyone stay for this? To its credit, the show is aware of the problem, and Vivien basically announces at the end of Episode Two that they are moving the fuck out of this house. How the show will get around the Eddie Murphy problem remains to be seen, but luckily the total absence of plausible motives becomes an advantage here as it is in Glee: characters can do whatever they want from week to week, with no logical development or progression, and the show will move on so quickly and excessively that the audience will hardly notice. 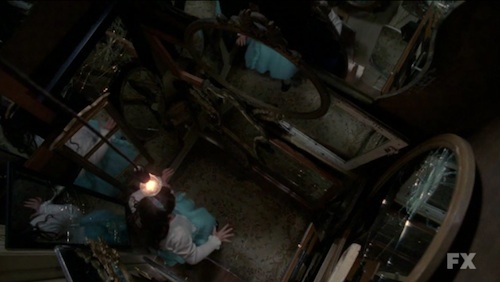 But—just as with Glee—there is something mesmerizing about the sheer, crazy-ass excess of American Horror Story, and I find I'm actually hoping it survives, if only to thrill that something this ridiculous can thrive on television. (Like Glee, it also has rare instances where it succeeds, when one of its wild flailing swings connects and delivers a moment of real horror. In the second episode, for example, Lange's Norma Desmond/Baby Jane character channels Carrie’s mom, and punishes her Down's syndrome daughter by locking her in a closet full of mirrors so she has to look at herself. It's offensively, preposterously cruel, and wildly fucked up—but it works to generate an image that's authentically disturbing.)

Mostly, I'm keeping my fingers crossed that American Horror Story doesn't get any better. The absolute worst thing that could happen to this show would be for it to get slightly better, losing all of its unintentional comedy and becoming simply a turgid horror anthology with pretensions. Right now it's a glorious, gratuitous mess, and as long as it stays that way it can be the guiltiest of guilty pleasures.