I know, I know, I'm running a couple of days late with this review. I could tell you that this is because I've been overburdened by outside commitments, and that would be true. (I have a day job, and it was a busy week.) However, in the interest of full disclosure, I have to admit that there is another factor at work here: I'm just tired of talking about this show.

It's a problem that's hard to avoid when I voluntarily commit to reviewing a show as deeply flawed as American Horror Story. For a while I could get by on sheer novelty and outrage: in the beginning, American Horror Story was just so bad and batshit crazy that it afforded me fun and exciting new opportunities for sarcasm and spite. This gleeful enthusiasm didn't last more than a few weeks, but the show kept furnishing enough pig men, brain-eating, crazed vivisectionists, spontaneous penectomies, and other nuggets that made writing the post-mortem on each preposterous episode juicy and diverting. (Occasionally, when I found my spirits flagging, I was forced to revive them by employing self-stimulating gimmicks like setting the plot of an episode to the tune of a Bob Dylan song.)

But writing  about a show like this, week after week, takes its toll. We're now on Episode Ten, and I find I've written something like 15,000 words on this ridiculous program, and it's getting harder and harder to find new ways to discuss a show that stays bad in exactly the same ways week after week. There are moments, dear reader, when I come perilously close to what A.A. refers to as a Moment of Clarity: simply put, I take a step outside myself, view my behavior from an objective perspective, and ask the obvious question: Why the fuck am I doing this to myself? I mean, no one is paying me to review American Horror Story. No one is forcing me to review American Horror Story. Hell, most of the time I don't even like American Horror Story. Why am I putting off all those movie reviews I need to write? Why in the name of Christ did I stop reviewing the absolute masterpiece of Deadwood to make time for this nonsense?

The only acceptable answer would be that I do it because it's fun—but lately, alas, I haven't been feeling the fun. The last time reviewing anything felt like this much of a chore, it was the craptastic abomination of Torchwood: Miracle Day—and, in that case, I just stopped. Life—unless you happen to live and die in Murder House—is simply too short. 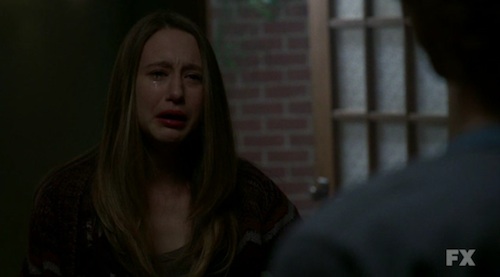 We're near enough to the end of the season that I won't abandon American Horror Story mid-stream, but it's been tough going. This week's episode, "Smoldering Children," written by James Wong, has exactly one thing worth talking about: The Big Reveal. And, to be fair, it was handled very well. I admit, I wouldn't have seen this coming at all if I hadn't accidentally stumbled upon some internet commentators discussing their theories last week. I wish I hadn't seen this particular theory advanced ahead of time, because I think I would have enjoyed this episode far more if I'd gone into it cold.

Still, even forewarned, the reveal of Violet's condition was deftly handled. It was foreshadowed with absolute fairness: the last time we saw Violet (Taissa Farmiga) leave the house was in "Piggy, Piggy," when—shortly before her suicide attempt—she met with Leah (Shelby Young) at the school swimming pool. In "Rubberman," Vivien (Connie Britton) tried to take Violet away, but the ghosts stopped them before they could actually leave the property. Since then, Violet has mostly been seen brooding in her room, or lounging in the attic with her undead boyfriend Tate (Evan Peters); the only thing we've heard about her is that she hasn't been going to school.

And so this week a truant officer shows up to inform Ben (Dylan McDermott) that Violet hasn't been to school at all for more than three weeks. (Evidence of some really excellent parenting from the Father of the Year here.) And hey, the house seems to be full of flies…That's weird.

When Tate practically tackled Violet to keep her from going to school this episode, I think even unspoiled viewers must have suspected where this was going; if not, the moment when the exterminator Ben hired found something terrible in the crawl space must have connected the dots for the rest of us. (And how my heart sinks to see the brilliant W. Earl Brown—veteran of the aforementioned Deadwood—reduced to a guest spot as "The Verminator" on this ridiculous show. Add in the appearance by Charles S. Dutton, and we have real confirmation that American Horror Story is purgatory for good actors who have fallen on hard times.) 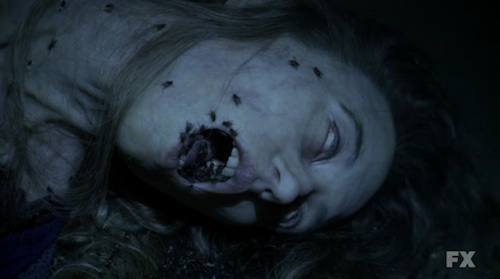 Still, the Violet reveal is a good example of the kinds of things that American Horror Story can—but seldom does—do right. The scene where she attempts to flee the house—only to keep running back into it—is a genuinely creepy moment, and the scene where Tate takes her to view her own body was suitably nasty and horrifying. (Taissa Farmiga, as usual, is excellent throughout this episode: with Connie Britton offscreen for most of this episode, Farmiga's performance provides the only recognizably human element.) If the whole episode had been a slow buildup to this sadistic payoff, I would probably be raving about it.

But American Horror Story continues to exhibit the attention span of a hyperactive, sugar-addled 8-year-old. "Smoldering Children" should have been Violet's episode, but the effectiveness of her storyline is severely weakened due to the unrelated nonsense crammed in around it. Most of the time this week is spent on the relationship between Larry (Denis O'Hare) and Constance (Jessica Lange), and the scenes between them—both the flashbacks and the present-day stuff—tell us little we didn't know before. Larry loves Constance: yes, we know that. Constance never really loved Larry—yes, we know that too. What we do learn—that Tate is the one who burned Larry—is not only unnecessary, but provides the third revision of Larry's story we've had so far, reinforcing my conviction that the writers have no master plan in mind. ("Larry burned himself! No, wait, Larry's wife started the fire. No, wait, what if Tate burned Larry!")

As is the case too often, this episode has no structure: there's no logical or thematic throughline that connects the Larry-and-Constance sub-plot to Violet's story, or to Ben's attempt to make up with Vivien, or anything else that happens. Like too many episodes of American Horror Story, "Smoldering Children" has no shape. Somewhere in the offices of FX, there is a whiteboard with a year's worth of plot points listed out in chronological order, and each episode just runs through as many as it can until they've filled 42 minutes of screen time, and then stops. Half-assed attempts to create a thematic unity—like the scene with Larry's children that gives the episode its title—do not make up for this failure. Yes, we get it, his kids are dead, like Violet is dead: SO THE FUCK WHAT? (Admittedly, the scene—with sweet-natured "Boy Dahlia" Travis sitting down for a tea party with the burned little girls—was surprisingly touching.) 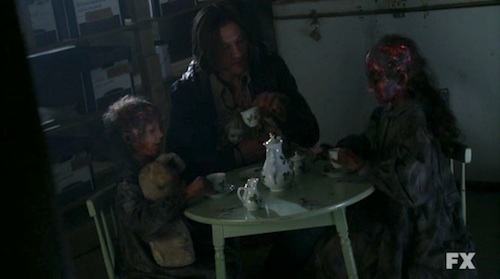 What American Horror Story really needs—apart from a more savvy and tyrannical script editor—is an exorcist. There are, simply, too many ghosts. There are too many dead people roaming the house, and too much clutter smothering the more promising storylines. As a result, this doesn't feel like a horror movie, it feels like an R-rated version of The Love Boat in which people like Charo and Florence Henderson show up week after week, have their stupid adventures, and then never leave the boat. I mean, W. Earl Brown gets a lifetime pass for playing Dan Dority on Deadwood, but I don't want to see him popping up as Phil the Verminator for three minutes during every third episode of this silly show. All of these dead people are not leaving any room for the living characters to breathe.

The Violet storyline isn't perfect, but it was nicely executed, and shows what this show could be doing if it had a more focused approach, an ounce of self-restraint, a little patience, and a less crowded set. Bring in an exorcist, American Horror Story, because it's time to clean house.