That's pretty much how I feel about American Horror Story.

I know something is going to happen each week, but I can't imagine what. In the rehashed morass of network TV, where even the best shows tend to be predictable, American Horror Story is sickly, addictively unpredictable. Granted, the surprises are often tasteless and repulsive—and seldom make a lot of sense—but there really is nothing quite like this show on television.

That urge to stick around for the next shock is universal, and very human, but here's the thing: it's not enough. Without a solid foundation of interesting characters, good writing, and a coherent vision, these shocks and gross-out scenes start to seem pretty pointless. I admire American Horror Story's willingness to make its audience reel, but it's not enough to sustain a show week after week when the shocks aren't built around anything that matters.

"Open House," written by co-creator Brad Falchuk, is by far the weakest episode of American Horror Story so far, and demonstrates the show's fundamental flaws all too clearly. The A-plot is formulaic, uninspired, and nowhere near shocking enough to be fun: an Armenian land-developer (Amir Arison) wants to buy Murder House. Moira (Frances Conroy/Alex Breckinridge) is excited about the possibility that the guy will put in a swimming pool, and thus discover her bones under the gazebo, and so sets about seducing him with the promise that the house comes with hot-and-cold running blowjobs. Constance, however, discovers that the developer just plans to tear the house down and build affordable housing units. (Is there a big market for low-income housing in Brentwood?) Tearing the house down will apparently threaten to displace the ghost community within, so Constance, Moira, and Larry lure him into the basement. There, Moira bites off his penis in the act of fellating him, and Larry smothers him with a plastic bag. (Poor Moira: she has to service the guests, bite off their penises, and clean up the blood stains—all for no pay.) 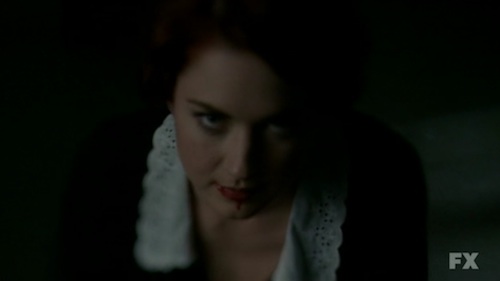 Yawn. The impromptu penectomy is supposed to be the big shock moment of the episode, but let's face it, we all saw it coming, and we've all seen it before. (In—coincidentally—The World According to Garp, among other places.) And the developer is a one-dimensional, cartoon douchebag. ("There are three reasons I deal with women," he tells Constance. "Sex, money, or making me sandwiches.") He's not sympathetic, but neither is he interestingly loathable, so we're neither gladdened nor horrified when he gets his peppy chewed off: the moment just falls flat. The entire storyline, in fact, feels like formulaic filler; where other shows have murder-of-the-week, or monster-of-the-week, American Horror Story has visitor-of-the-week: one-off guest stars, unconnected to the larger story, who exist just to be ghost fodder.

Speaking of which, we now have another ghost. Having recklessly (and, so far, pointlessly) killed off Addy, it's time to give Constance another disabled child from the Catalog of Horror Clichés: this time it's a deformed boy, chained in the attic, named Beau (Sam Kinsey). Beau has no lines…or story…or, as far as I can tell, point, except to show that Constance has a vested interest in keeping the house standing so she can go spend quality time with her drooling son (who we've never seen before). 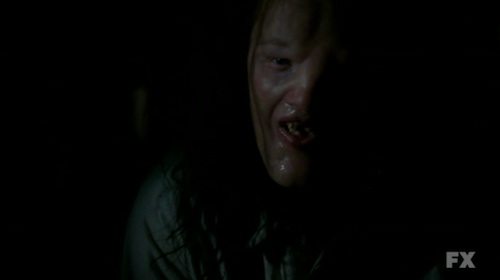 Also from the Department of Making It Up As They Go Along, we now have a revised history for Larry. Now we discover he lied to Ben about killing his wife and children: actually, his wife started the fire that charbroiled the little kiddies and turned Larry into Two-Face. (Don't ask me why Larry lied to Ben in Episode One: I have no idea, which is something I'm sure the writers and I have in common.) Larry's wife did this, of course, because Larry was in love with Constance—so in love, in fact, that Constance enlisted him to smother her beloved Beau.

Denis O'Hare is, as usual, excellent in all his scenes—both when he's playing whipped, pre-burn Larry and when he's playing scarred, crazy Larry. (Only O'Hare could make the single line "Nescafe?" quite so funny.) But the story doesn't make a lot of sense, the revisions to the background and timeline seem random and unnecessary, and the storytelling is clumsy to say the least. (The flashbacks completely muddle just who was living in Murder House, and when: on first viewing it gives the impression that Beau was chained in the attic while Larry and his wife were living in the house.) 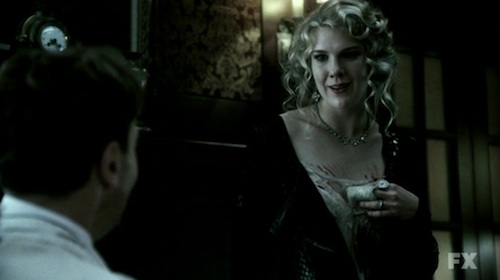 Nothing else in this episode works any better. Vivien (Connie Britton) and her racist, mentally unstable realtor Marcy (Christine Estabrook) are trying to unload the house, but Vivien feels obligated to tell potential buyers its ridiculously colorful history. (Good luck with that.) So, through the already-tiresome device of the "Murder Tour," Vivien learns the rest of the story of the original occupants of the house, Dr. and Mrs. Montgomery (Matt Ross and Lily Rabe). This flashback tells us little we didn't already know: Charles Montgomery, after practicing on bat-winged pigs, had succeeded in bringing their  baby back to life. Nora's first instinct, naturally, was to try to breastfeed the little patchwork homunculus, which led to her discovery that her husband had included a mouth full of bat teeth in the baby's upgrade. (Because, sure, why wouldn't you?) So her second, more understandable instinct was to try to stab the kid back to death with a letter opener, and then kill her husband and herself.

Meanwhile Larry has also expressed interest in the house—though he clearly has no money—which prompts Ben (Dylan McDermott) to go warn him away. Like most plotlines featuring Ben, this entire story is just laughably bad: Ben suddenly puts on the air of a B-movie tough guy, appearing menacingly in Larry's apartment, wearing black leather, smoking a cigarette, and talking like a low-budget mob hitman. Where did this guy come from? It's so ridiculously out of character, and sadly unconvincing, that it feels like the writers are floundering around trying something new with a character they know isn't working.

(Messrs Falchuk and Murphy, heed my advice: you can improve this show immensely with one simple step: kill Ben off, and make sure you do it off the property so he doesn't come back.) 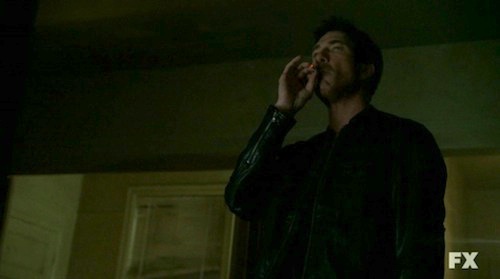 And, as I confessed in the beginning, it's working so far—but not for long. I'll keep watching, but even as a guilty pleasure this show desperately needs to anchor its nuttiness to something real. Giving Vivien something to do would be an excellent start: Connie Britton is exactly the kind of actress that could provide an emotional heart to all of this nonsense, but she has been sorely underutilized by the show's writers. Taissa Farmiga is also very good, and her character has fared a little better—I liked Violet's line this week encouraging her parents to go back to their "policy of benign neglect"—but both Violet and Vivien seem like minor characters in a story that they should be driving.

I still have hope: last week's episode—the "Piggy Man" subplot notwithstanding—actually had some cohesion and dramatic substance. But if we've learned one thing from Glee, it's that consistency is not high on Falchuk and Murphy's priority list. In fact, American Horror Story increasingly feels to me like one of those campfire games, in which one kid tells part of a ghost story and then hands it off to the next kid, who may take it in a completely different direction. It doesn't matter if the first kid carefully constructs a story that's effective and powerful: the next idiot might undo all that, disregard the logic, and throw in some random attic-creature and a meaningless dickmemberment.

That kind of random shock value may work to keep the kids interested, but such disregard for good storytelling is eventually going to put the grown-ups to sleep. And I'm getting sleepy.