What's past is prologue, Shakespeare says in The Tempest: it informs and drives everything we do in the present, but it is gone, and what's to come is "in yours and my discharge." "Fire and Blood," the 2011 finale of Game of Thrones, and the thrilling conclusion to one of the most extraordinary seasons of television ever produced, gives us a brutal dividing line between the prologue of history and an uncertain future. We begin in blood and we end in fire: both symbols of death, but also symbols of life, of rebirth, of purgation of everything that has come before. In Game of Thrones, as in life, the only certainty is change.

Throughout this episode we hear reminders of the inevitable cycle of death and rebirth, but also of the terrible truth that time moves in only one direction: forward. The opening shot this week—of the sword that severed the head of Eddard Stark—signifies more than the death of our hero. It underlines a brutal cut with everything we have known before.

"That's where I saw father."—Bran Stark 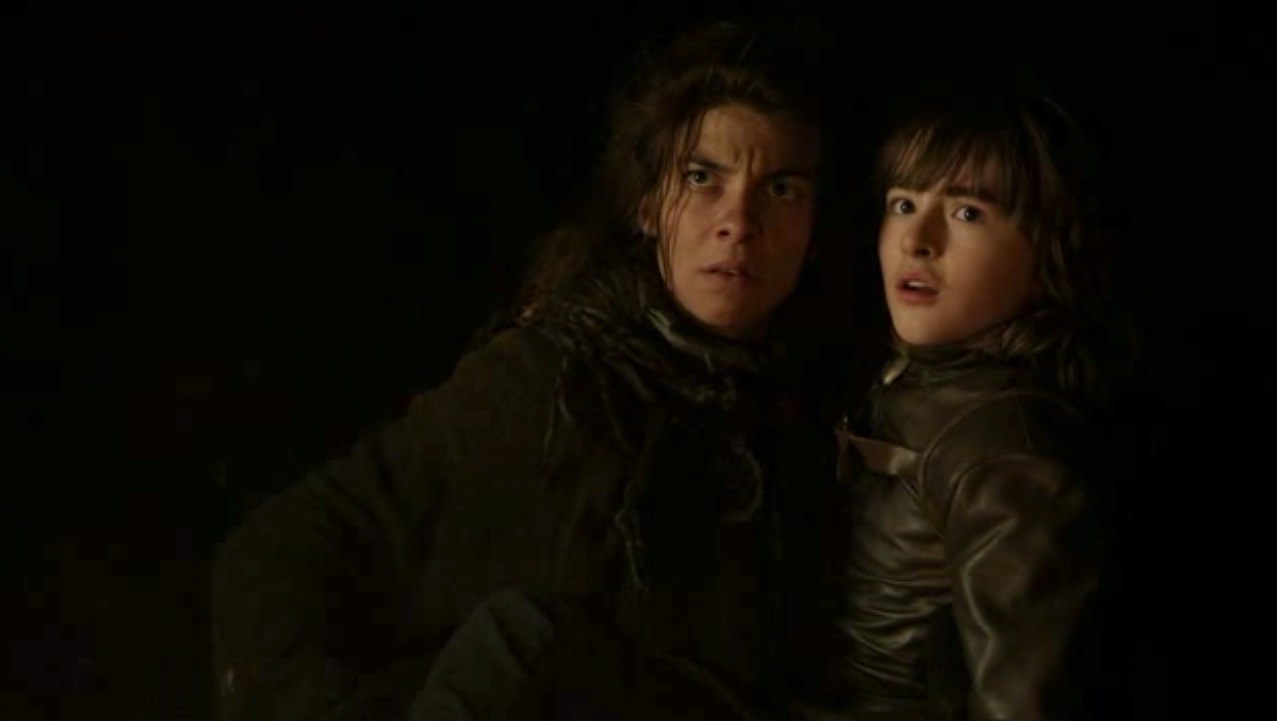 Consider where we began. In my first post on Game of Thrones, I laid out the major players in George R. R. Martin's epic story: House Baratheon, House Stark, House Lannister, House Targaryan, the Dothraki, and the Night's Watch. By the end of this episode the heads of four of these six factions are dead, swept away in the tide of history, and the aging leaders of the remaining two prepare to transfer power—and responsibility—to the next generation.

We get several reminders of time's all-consuming tide, the first being the tour Bran (Isaac Hempstead-Wright) and Osha (Natalia Tena) take of the Stark Family crypts. Bran points out all the dead Starks—his grandfather, killed by the Mad Targaryan King; his father's sister, whose abduction sparked a war—and both Bran and Rickon have seen prophetic (and tragically accurate) visions of their father's joining them. Ned Stark will be a stone face in the crypt now, a story told through the generations, the decent, flawed, wonderfully real man consumed—and subsumed—by history.

"There sits the only king I mean to bend my knee to: the King of the North!"—Greatjon Umber 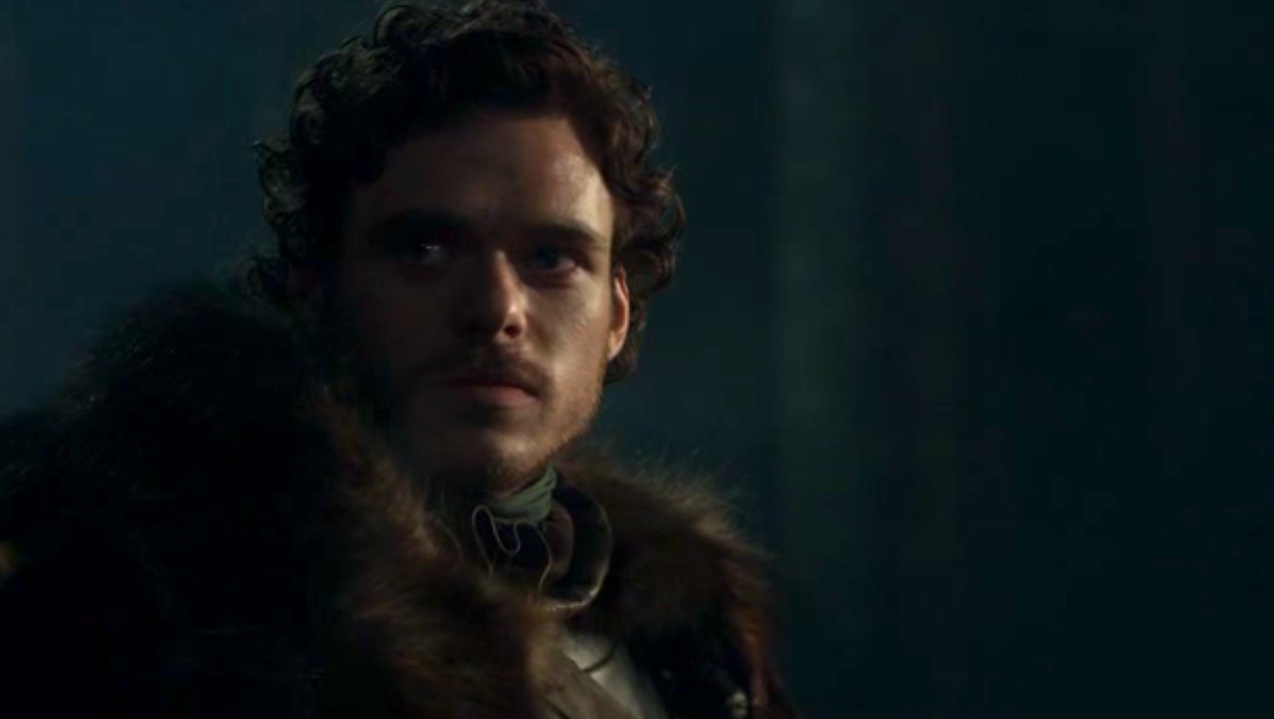 Now Robb (Richard Madden) is head of House Stark, Lord of Winterfell in his father's place—and something more. Ned's death does not just mean the death of one man: it means the death of the Seven Kingdoms, for now the Lords of the North have decided that no southern king will rule them.

When I reviewed Episode 6, "A Golden Crown," I discussed how fragile the alliances were that held the kingdoms together under one ruler, and the fact that the Iron Throne only has power because everyone agrees it does. Now, the Lords of the North are no longer in agreement. "They can keep their red castle, and their iron chair, too" they shout—stripping both symbols of their power—and they proclaim Robb—in what must be one of the greatest field promotions ever granted—the "King of the North." In the words of another king (Arthur, in Tennyson's "Idylls of the King:"): "The old order changeth, yielding place to new…Lest one good custom should corrupt the world."

"Kings? I can tell you all there is to know about kings."—Grand Maester Pycelle 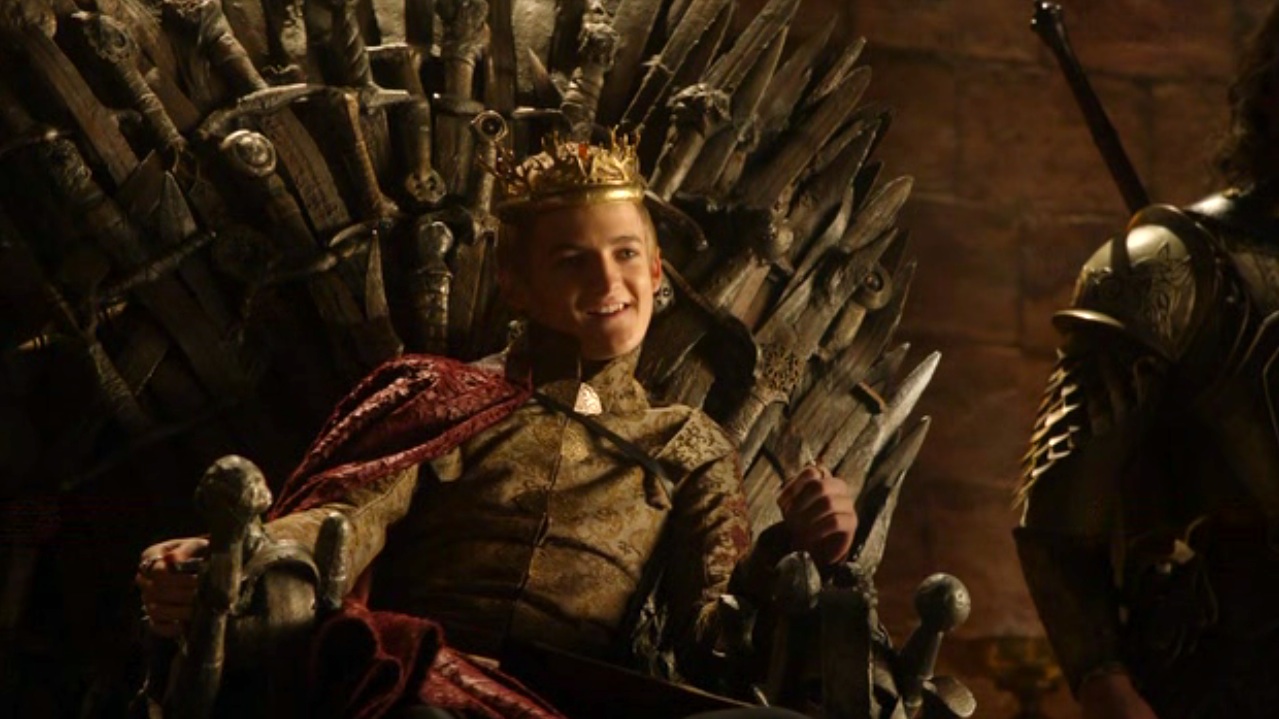 Robert Baratheon, too, is dead, and a sniveling monstrosity sits the Iron Throne.

Joffrey (Jack Gleeson) rules like the sadistic boy he is, getting sick thrills from pulling the wings off flies. He has a troubadour mutilated for singing a comic (and surprisingly accurate) account of history, and he revels in making Sansa (Sophie Turner) gaze at her father's head on a spike. Even Sansa now sees him for what he is, and contemplates pushing him off the castle wall. (Sophie Turner is excellent here, and Sansa may yet prove to be a Stark after all.)

Grand Maester Pycelle (Julian Glover)—in a post-coital pontification—lectures Ros about kings, and says he sees "true greatness" in King Joffrey. ("Stern—but sternness in defense of the realm is no vice.") Of all the people in Westeros who claim to serve the realm, Pycelle may be the only one who actually does: he served the Mad King, Robert, and Joffrey all the same, and others before them. His is the perspective of history, with each king just another entry in the history books.

And he's a fool. When it comes time for him to make his big, overarching point about kings, he can't remember what it was: he has nothing to say about kings in general, because they're all the same to him. His view allows for no true understanding of the fact that kings are men, and each man is different, ruling from personal strengths and weaknesses, shaping history according to his personality. (This is a point Jaimie Lannister [Nikolaj Coster-Waldau] also makes to Catelyn [Michelle Fairley]: "There are no men like me. Only me.")

"You are my son."—Tywin Lannister 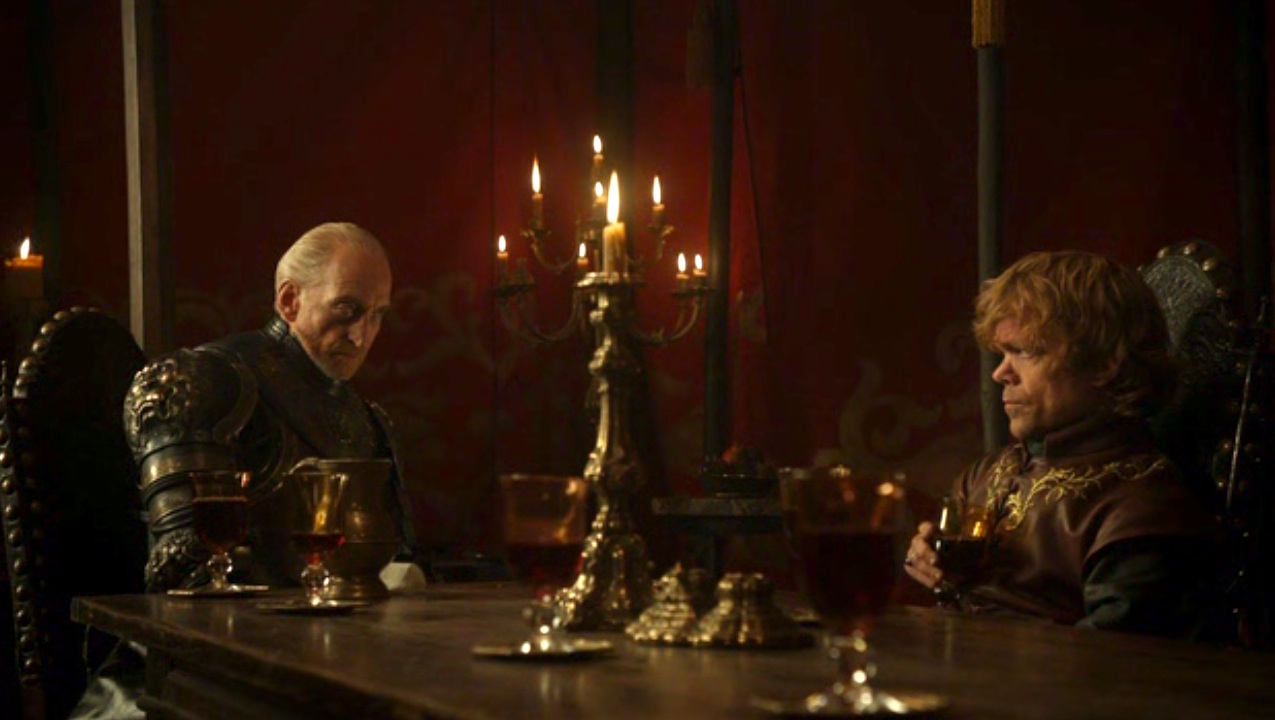 So two great houses have passed from father to son, and now—symbolically, if not literally—so does a third. The Great Tywin Lannister (Charles Dance), the last of the old powers, is a nearly-broken man. He has been beaten on the field by Robb; he is threatened on two more sides by Renley and Stannis Baratheon; he is aware that his grandson, the new king, is a twerp; and his son Jaime, Tywin's heir, has been captured by the Starks. All Tywin has ever cared about is his House—the Lannister name—and he seems to recognize now that his despised son Tyrion (Peter Dinklage) is all he has left.

Now, Twyin—who was Hand of the King under King Aerys—appoints Tyrion to that post, effectively sending him to rule the Seven Kingdoms. (It's a lovely scene between Dance and Dinklage: two men who hate each other, but the father recognizing potential in his son, and the son, despite everything, clearly wanting his father's approval.) If there was any doubt about how the power has shifted, however, Tyrion even decides to ignore his father's order to leave Shae (Sibel Kekilli) behind; the days in which Tywin could brutally control his son's love life are over.

"When the sun rises in the West, and sets in the East, then you shall return to me, my sun and stars."—Daenerys 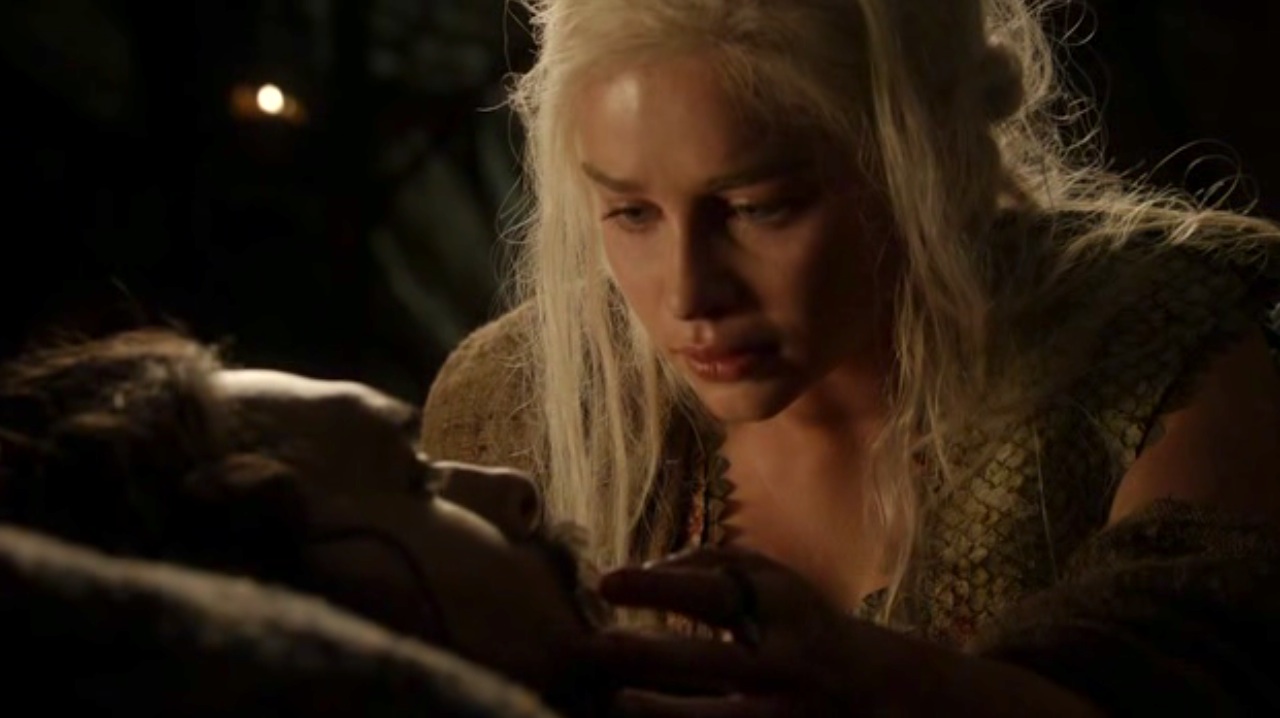 Only death can pay for life, Mirri Maz Duur (Mia Soteriou) warned Dany last episode, before beginning the blood magic that was meant to save the life of Khal Drogo (Jason Momoa). Now we see what she meant, as Dany's child has been sacrificed to achieve a walking death for Drogo. It is a terrible revenge enacted by the witch, whose own life was swept away by the Dothraki, leaving her nothing to lose. "Why don't you take a look at your husband," she tells Dany. "Then you will see exactly what life is worth when all the rest has gone."

Time only moves forward: when Mirri tells Dany that Drogo will return to her "when the sun rises in the West, and sets in the East," it is another way of saying never, and so Dany smothers the catatonic Drogo. She has lost her family and her house; she has lost her husband, her child, and her khalasar: the dead are gone, and what's past is prologue.

But Dany—perhaps the most resilient survivor in Game of Thrones—is moving forward: her brother's death made her ruler of House Targaryan, and her husband's death makes her ruler of a new kind of tribe, with new rules, new traditions, a new world order. Sacrificing Mirri Maz Durr on Drogo's funeral pyre— "it is not your screams I want, only your life"—she improvises a new form of blood magic, using the flames of her old life to fire the dragon eggs, and stepping into those flames to burn away the past, to emerge like a phoenix reborn from the ashes. She buys new life with death: "Daenerys Stormborn, of House Targaryan, of the blood of old Valyria, the dragon's daughter," now becomes The Mother of Dragons, and we are left with the promise of a new age of fire and magic. 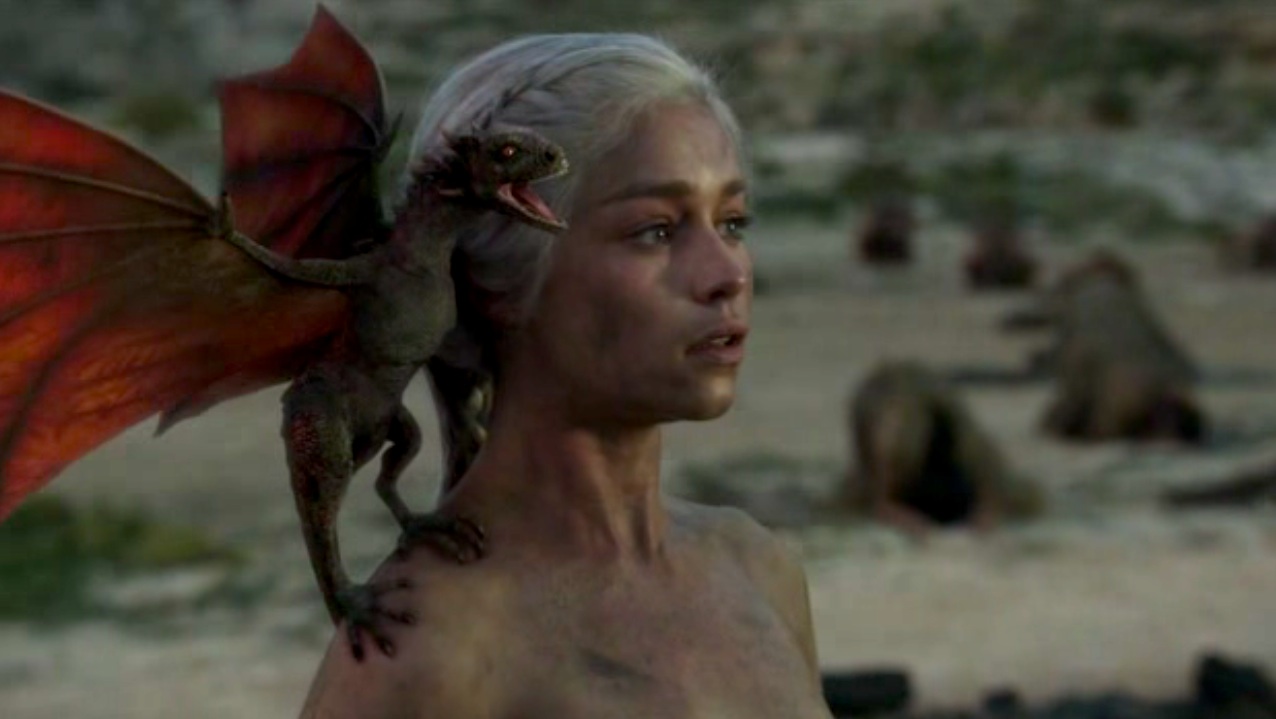 There is a cyclical nature to history, of course, that we disregard at our risk: from one perspective (Master Pycelle's, perhaps), all of this is a return to the past. There was a time when Westeros was seven kingdoms at war, not one at peace; there was a time when there was a King of the North, a time when White Walkers strode the woods, and when dragons rained fire from the heavens. There is an argument to be made that this entire season of Game of Thrones has been an un-doing, a resurgence of past sins and mistakes, a return full-circle to repeat the history from which people failed to learn.

But such an account of history disregards the people involved, and the lessons we have learned all season long: that individual lives have meaning; that all politics is personal; that honor, duty, and justice are all works in progress; that people can change, and change the world around them. Robb is not Ned, Joffrey is not Robert, Tyrion is not Tywin, Dany is neither Drogo nor Viserys. Time only moves forward, and there is nothing inevitable but change. No one can say how long the summer will last, but one thing is certain: winter is coming.