I really wanted to dislike HBO's Game of Thrones—and I would have gotten away with it, too, if it hadn't been for one meddling kid.

I needed a new television addiction like I needed an ice-cold broadsword up the ass. I haven't read the source material, George R.R. Martin's A Song of Ice and Fire, but I'd heard enough to know that it is an epic, eternally unfinished series of critically acclaimed and cult-worshiped fantasy novels, which apparently weigh about 40 pounds each, and which collectively feature approximately 847,000 major characters—all of whom have swords, silly names, and complicated political allegiances. Every once in a while a friend would recommend A Song of Ice and Fire as "fantasy novels for grown-ups," and rave about the incredibly rich and complicated fictional world they create, the sophisticated narrative structure of alternating points-of-view, and the incredibly dense political intrigue. Frankly, it all sounded positively exhausting. 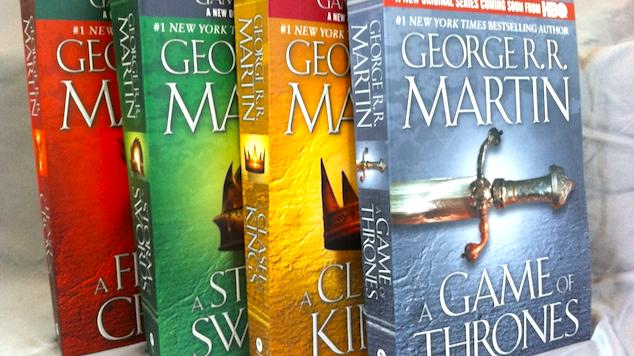 I'm also—and this is probably a moral failing—not really a big fan of "fantasy for grown-ups." Fantasy is fine, and if it appeals to me as a grown-up, all the better. But, in my experience, fantasy that is continually lauded and defended as being "adult" or "literary" tends to be protesting too loudly its genre roots, and very likely taking itself far, far too seriously.

Like I said, I haven't read the novels, which may very well be wonderful: I'm just confessing my preconceptions. And, so far, HBO's Game of Thrones—a 10-part adaptation of the first of Martin's novels—has met most of my expectations. It is a little exhausting, it does take itself too seriously, and there are, by actual count, 847,306 major characters to keep straight. But it's also kind of fabulous.

The series is set in the Seven Kingdoms of Westeros, where seasons can apparently last for decades: it's been temperate for a good many years when the story begins, but—as everyone keeps solemnly intoning— "winter is coming." Our hero—as much as we have one so far—is Eddard "Ned" Stark (Sean Bean), the good-hearted lord of the northern realm of Winterfell, and loving father to five children. (Well, six, if you count his slightly resentful bastard son.)

In the first episode the entire kingdom is seeing omens of dark days ahead, and Ned's old friend King Baratheon (Mark Addy) drafts him to serve, reluctantly, as "the King's Hand," a sort of chancellor. (The King also wants to join their two houses by marrying Ned's silly eldest daughter Sansa [Sophie Turner] to spoiled and sadistic crown prince Joffrey [Jack Gleeson], who is what Draco Malfoy would be if you plopped him down in this violent and R-rated world.)

As we learn early, the King's previous "Hand"—who also happened to be Ned's mentor—was murdered for reasons yet unknown by the King's scheming wife Cersei Lannister (Leda Headey) and her preening brother Jaime (Nikolaj Coster-Waldau), who are awfully close. They are somewhat less close to their brother Tyrion (Peter Dinklage), a dwarf, who has chosen to live life as a sardonic sensualist since he'll never be a warrior.

Meanwhile, across the Narrow Sea, Viserys Targaryen (Harry Lloyd), the oily, exiled heir of the previous ruling family, barters his beautiful sister Daenerys (Emilia Clarke) to warlord Khal Drogo (Jason Momoa) in exchange for an army to win back his throne.

The House of Baratheon, the House of Stark, the House of Lannister, and the House of Targaryen; these are the four families to whom we're introduced in the first few episodes, and each includes various children, counselors, staff, and/or hangers-on who factor in the story. If that weren't enough, there is also the Night's Watch (a brotherhood of priest-like warriors who guard the kingdom's borders); the many bare-breasted men and woman of Drogo's nomadic entourage; and—if  HBO's website is to be believed—five more "houses" still to be met.

As complicated as this all sounds, these first few episode actually do a very good job of introducing these characters; by the end of Episode Two I was clear on who everyone was, even if I was less clear on what they all want. The cast is good—Bean in particular is excellent—though everyone is forced to speak in the stiff, overly enunciated, faux archaic style that universally designates a medieval period piece. (One also hopes that we will soon get through the preliminaries, and characters can stop speaking in exposition: right now they're all prone to portentously announcing their intentions and spontaneously pontificating on their histories.)

I don't mean to undersell Game of Thrones. First of all, it's gorgeous. HBO has clearly spared no expense on this series, and it shows. Shot on locations that primarily include Northern Ireland and Malta, Game of Thrones is a visual delight, with gorgeous scenery and incredibly rich detail. I've tried, and failed, to think of anything comparable in terms of television production values: Band of Brothers and The Pacific probably came close, but that was historical recreation, while this is creating several very different kingdoms—each with their own scenery, architecture, fashion, jewelery, and  customs—from scratch. If this thing doesn't win every available award for costuming, art direction, and cinematography, I'll eat one of the realistic-looking rotting animal carcasses that litter its scenery.

It's also—and I mean this as a high compliment—an addictively sensationalistic, grand-guignol soap opera. For all its self-serious airs and graces, Game of Thrones is, at its heart, just an R-rated Dynasty about actual dynasties, Falcon Crest with falcons and crests. Excessive amounts of blood are spilled, gratuitous numbers of breasts are bared, and men ride horses with purpose over swelling hills accompanied by heavy drums and cellos. It's well made, but a bit adolescently silly, and sillier still for pretending it's not; it's so full of itself that it makes me want to poke it with a stick just to let a bit of air out—or in.

Unlike the best HBO series, Game of Thrones is not really about anything but itself. But I found that once I stopped faulting it for not being The Wire or Deadwood—shows which were about something—I started getting caught up in the plotting, scheming, whoring, slaughtering, deal-making, back-stabbing, revenge-seeking, omen-spouting, secret-keeping, sister-fucking fun of it all.

Still, I might not have stuck with Game of Thrones if not for Arya (Maisie Williams). Sometimes, in a sea of 847,306 characters, you only need to care about one to keep you coming back—and 12-year old tomboy Arya Stark had me from the start. The only available roles for women in Westeros seem to be pawn or queen, but Ned Stark's youngest daughter is quietly learning to be a knight. Brave, headstrong, and with a fierce sense of justice, Arya can shoot a bow better than her brothers, and keeps rejecting the knitting needles she's handed for any available blade. (When she finally gets her own sword, she names it "Needle," in a sly act of proto-feminist linguistic reclamation.) By the end of these episodes, Arya has already offended the Lannisters and humiliated the cowardly crown prince—who doesn't seem like the type to forget a slight—so it's probably a good thing her father has hired her a fencing instructor. 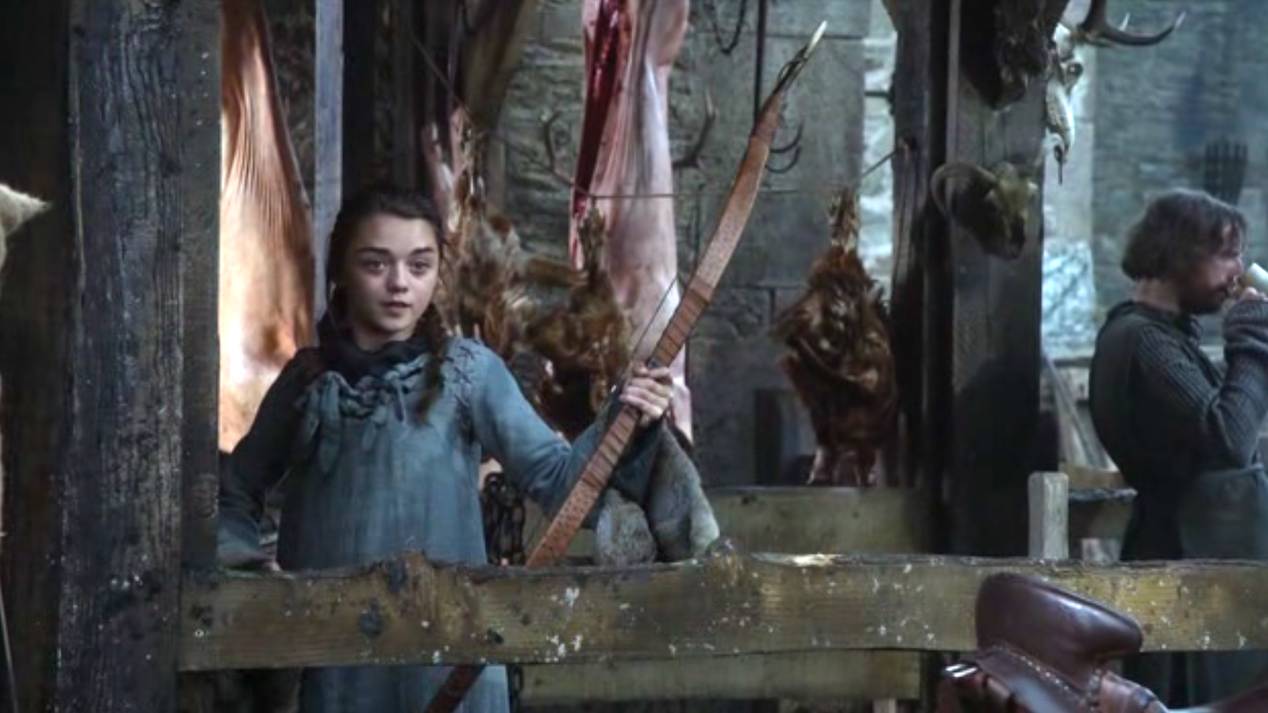 I have no idea if Arya turns out to be a major character, but I hope so, because Maisie Williams—in what seems to be her first acting role—is a star in the making, and Arya is one of the few unadulterated delights of Game of Thrones. I think part of the reason I'm so taken with her is that Arya—elbowing her way in to ride horses, shoot bows, and sword-fight with the boys—is the only person in this solemn cast of thousands who seems to think it's okay to acknowledge that this stuff is kind of fun.