VALERIAN AND THE CITY OF A THOUSAND PLANETS (2017)

Valerian and the City of a Thousand Planets is part of My Summer of Summer Movies, in which I am attempting to see and review every movie that opens (in Chicago) between Memorial Day and Labor Day. Read all about this ill-advised plan here.

Luc Besson's Valerian and the City of a Thousand Planets is that rarest of things: it's a movie about which I'm going to find it almost impossible to argue.

That's kind of a problem. I mean—even before I launched a website where I could do it publicly—I've always loved arguing about movies. I've spent my life welcoming any excuse to defend an unfairly maligned masterpiece, and relishing the opportunity to savage a film that was inexplicably adored. It probably goes without saying—it's more or less a prerequisite for my current pursuit—but I'm just the type of person who can't resist the urge to say, "Here's why you're wrong about that movie." (In some circles, that person is called a "critic." In others, they are called an "asshole." The two terms are not mutually exclusive.)

But I walked out of my viewing of Valerian and the City of a Thousand Planets with the unsettling suspicion that I would find myself agreeing with almost any opinion I heard voiced about it. Tell me it's the best movie you've seen all summer, and I will gleefully geek out with you about its many charms. Tell me it's the worst movie of the summer, and—though I might feel obliged to ask whether you've seen Transformers: The Last Knight—I will find it neither necessary nor possible to counter your undoubtedly valid criticisms.

What it boils down to is, Valerian and the City of a Thousand Planets is a big, beautiful, gloriously goofy mess of a movie. It is a near-perfect balance of admirable qualities and lamentable ones. It is both wonderfully original and painfully derivative. It is both masterful and clumsy. It is smart and dumb at turns, charming and charmless in nearly equal measures. Whether it works for you, therefore, may depend entirely on your personality, your mood, your willingness to forgive, the accessibility of your inner child, the currently dominant hemisphere of your brain, and, perhaps, on what you had for breakfast.

For me, one half of my brain was ruthlessly cataloguing the film's many, many faults, while the other half was blissfully going with the flow and having way more fun than I am fully prepared to admit.

As with many such movies, the plot is both the hardest element to describe, and the least meaningful. Basically, Dane DeHaan (A Cure for Wellness) and Cara Delevingne (Suicide Squad) play Valerian and Laureline, two intergalactic federal agents. As the film opens, they are tasked with retrieving the last Converter, an adorable little lizard-lifeform that is capable of reproducing infinite quantities of anything it eats. This eventually leads them into investigating the fate of Mül, the creature's native planet: once a beach paradise of peaceful, wispy, scantily-clad bald aliens, Mül was destroyed thirty years earlier by forces unknown. Now, Valerian and Laureline find themselves uncovering a conspiracy about that planet—and its exotically spindly natives—aboard Alpha, the titular City of a Thousand Planets. (Originally an Earth-launched space-station, Alpha welcomed delegations from hundreds of alien worlds, gradually incorporating their peoples until it became a gigantic multicultural oasis of mutually-beneficial coexistence.)

With me so far? Actually, it doesn't matter whether you are or not, because the plot of Valerian and the City of a Thousand Planets is preposterous, confusing, and hardly the point. But around this mish-mash of clichés and hoary space-opera tropes—the noble native race in need of saving; the military conspiracy; the bickering but sexually-compatible partners—Besson creates unspeakably beautiful worlds and remarkably clever set-pieces.

The credits sequence—a clever montage covering several hundred years of Alpha's origin story, set to David Bowie's "Space Oddity"—earns a lot of goodwill right off the bat, and an early sequence documenting the destruction of Mül—with its vibrant colors and Santorini-like beaches—promises that the film will out eye-candy Avatar. (I hardly ever say this, but see it in 3D: really.) But it was the first major set piece—a complicated undercover operation set in two dimensions simultaneously—that convinced me that the best thing to do with Luc Besson's gonzo vision was to sit back and let the ideas and images churn deliriously around me without thinking about any of them too much. 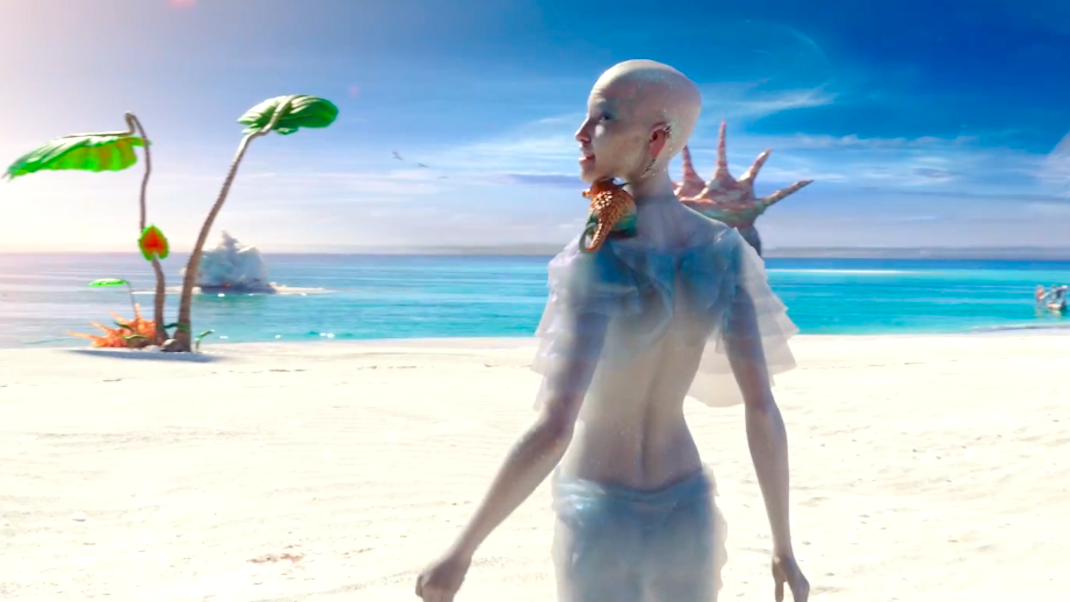 Make no mistake, there is an argument to be made that Valerian and the City of a Thousand Planets would work best with the sound turned off, so as to experience the imaginative beauty of the visuals—and the characters—without being distracted by the questionable acting and the utterly abysmal dialogue. DeHaan and Delevingne are both attractive people, but they are neither quite charming enough nor sufficiently movie-star sized to be anything but dwarfed by the film around them. With their tough-guy banter—masking an undercurrent of romantic and sexual tension—the film wants them to be Han Solo and Princess Leia, but there is, regrettably, an untold galaxy between Harrison Ford and Carrie Fisher and these actors.

To be fair, they are working with dialogue that is even worse than George Lucas's. Though the film is based on a classic French graphic novel series by Pierre Christin and Jean-Claude Mézières, Besson is listed as sole screenwriter, and English is demonstrably not his first language. A quick script-doctoring by another writer might have elevated Valerian and the City of a Thousand Planets to a whole different level, but as it stands the dialogue is a mixture of clunky exposition and unforgivably clichéd lines borrowed unironically from other films.

But you know what? I somehow didn't mind: the characters, dialogue, and plot are all just functional necessities, and they know their places and roles. Each plot element is introduced to set up a problem; each problem has a single and obvious solution which becomes the next MacGuffin; each MacGuffin is conveniently nearby and reliably embedded in a dazzling and clever visual extravaganza. 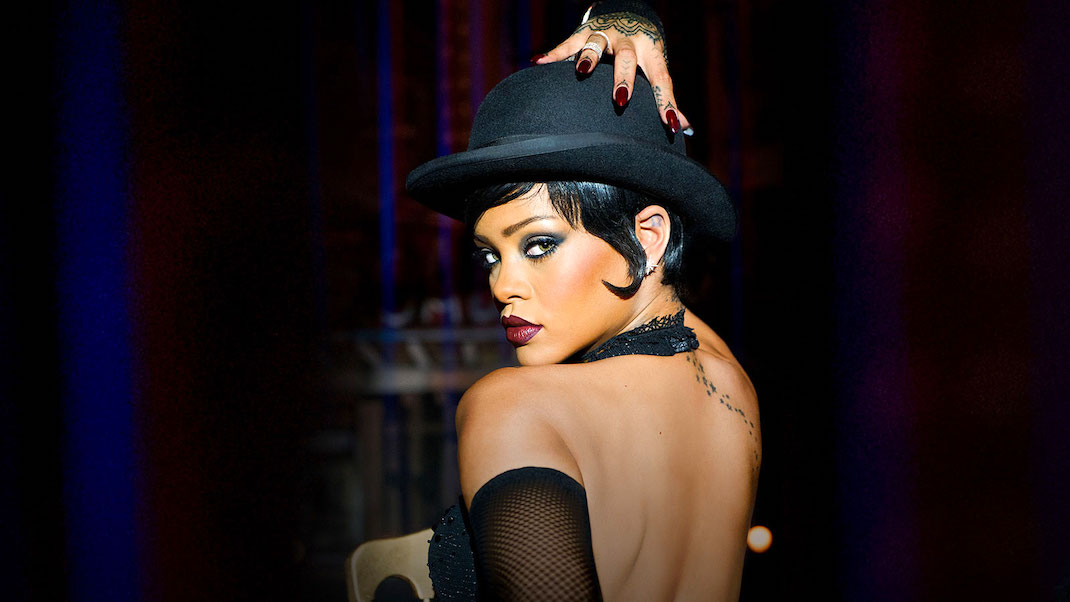 One of these plot devices—simultaneously the best and most ridiculous one—is a "Glamapod," a shape-shifting alien Valerian needs to infiltrate a colony of hulkish monsters. Luckily, he happens to find one just as soon as he needs one; luckier still, she goes by the name of Bubble, and—when he meets her—is an exotic dancer and quick-change artist who looks an awful lot like Rihanna. (Because, really: if you could look like anyone, why wouldn't you look like Rihanna?)

I should raise objections to the fact that Rihanna basically plays a stripper—albeit, as it turns out, a touching and heroic one—and that she is introduced performing an act that consists of transforming herself into one objectified male fantasy—naughty schoolgirl, naughty nurse, etc.—after another. These would be the same objections I could raise to the various excuses Besson finds to make Cara Delevigne's Laureline perform her space-cop duties in a series of increasingly skimpy—and, let's face it, highly impractical—outfits.

And honestly, my left-brain did object to all of this: the clichéd situations, the straw-man plotting, the clunky dialogue, the shaky acting, the shameless titillation. But I'll admit it: it's all so pretty, and all so clever, and all so much self-aware fun that I just couldn't get too indignant. Valerian and the City of a Thousand Planets is every bit as beautiful as Avatar, and it is also—make no mistake—every bit as dumb. But the difference is one of tone, and it makes all the difference. Where James Cameron seemed to think he was making a profound, mystical masterpiece, Luc Besson knows he is providing a goofy, gonzo, candy-colored cornucopia of silliness. Though it goes on a bit too long—and drags us into more standard plot beats in the last act—there is such good-natured, innocent, playfully inventive energy throughout Valerian and the City of a Thousand Planets that I just went with the ride. For me, it somehow transcended all its own obvious limitations to become something indescribably beautiful, inexplicably glorious, and irresistibly entertaining.

Really, it's kind of a bad movie. Now hurry out and see it, so they'll make another one for me to enjoy.