The Mummy is part of My Summer of Summer Movies, in which I attempt to see and review every movie that opens (in Chicago) between Memorial Day and Labor Day. Read all about this ill-advised plan here.

In The Mummy—director Alex Kurtzman's rebooting of the venerable, veritably desiccated franchise—Russell Crowe's mysterious character explains that the secret organization he heads is in the business of "evil." Evil, he explains, is a shadow that is always waiting just outside our world, looking for any entry point so that it may become flesh. And, of course, it must be stopped. ("Sometimes, it takes a monster to defeat a monster," Crowe says, confirming once again that some variation of this line must come free with all screenwriting software.)

The identity of Crowe's character is something of a spoiler—if not a particularly surprising or inspired one—and his (movie-detouring) presence here is to help establish the parameters of Universal Pictures' new "Dark Universe" imprint. Having been almost completely shut out of the lucrative superhero wars, Universal has decided instead to create a shared cinematic universe out of its hoary old monster-movie properties. The Mummy is the first film in this planned new franchise, and riding on its coattails—tatters?—we can anticipate new versions of Frankenstein's monster, Dracula, the Invisible Man, the Creature from the Black Lagoon, and the entire pantheon of creature-feature icons. (Dare we hope that Universal will dig deep into their catalog and resurrect such underserved creations as The Creeper and Paula the Ape-Woman?) Crowe's character, presumably, is to the Dark Universe what Samuel Jackson's Nick Fury is to the Marvel Cinematic Universe: the connective tissue that makes one awkwardly large story out of disparate component pieces.

In other words, the real business of Crowe's organization—and, by extension, the entire Dark Universe—is money (which is, after all, the root of all evil). Universal is banking on The Mummy being the start of something big, and that air of commercial desperation permeates every gray, CGI-soaked frame of the film. The Mummy plays like a blockbuster assembled according to a computer algorithm: it feels like it has been not only deliberately dumbed-down, but carefully stripped of even accidental moments of originality or inspiration. The result may not be the worst movie I expect to see all year, but it's a thunderously banal mediocrity that evokes not the slightest excitement for further monster mayhem.

The one and only "risk" The Mummy takes may not have been intentional, and it definitely wasn't smart: it makes its protagonist an asshole. Nick Morton (Tom Cruise) and his generically bantering sidekick Chris Vail (Jake Johnson) are (vaguely) attached the American armed forces in Iraq. (It is never entirely clear if they are actual soldiers, or some kind of mercenaries: they fear the wrath of their commanding officer [a wasted Courtney B. Vance], and can call in airstrikes on a whim, but they seem to wander around the country undirected, looting and pillaging ancient sites to line their own pockets.) In their first scenes, Nick convinces a reluctant Chris to join him in an ill-conceived assault on a small village, where there is supposed to be a tomb full of untold goodies to steal.

It doesn't seem like it's supposed to bother us, the audience, that the ensuing bloody firefight and destructive bombing raid has no honorable military or archaeological objectives: it's just supposed to be a fun way to establish the character of our reckless, roguish, soldier-of-fortune hero. Nor are we meant to be overly troubled by the revelation that Nick only learned about this tomb by sleeping with archaeologist Jenny Halsey (Annabelle Wallis) and stealing the map from her while she slept. 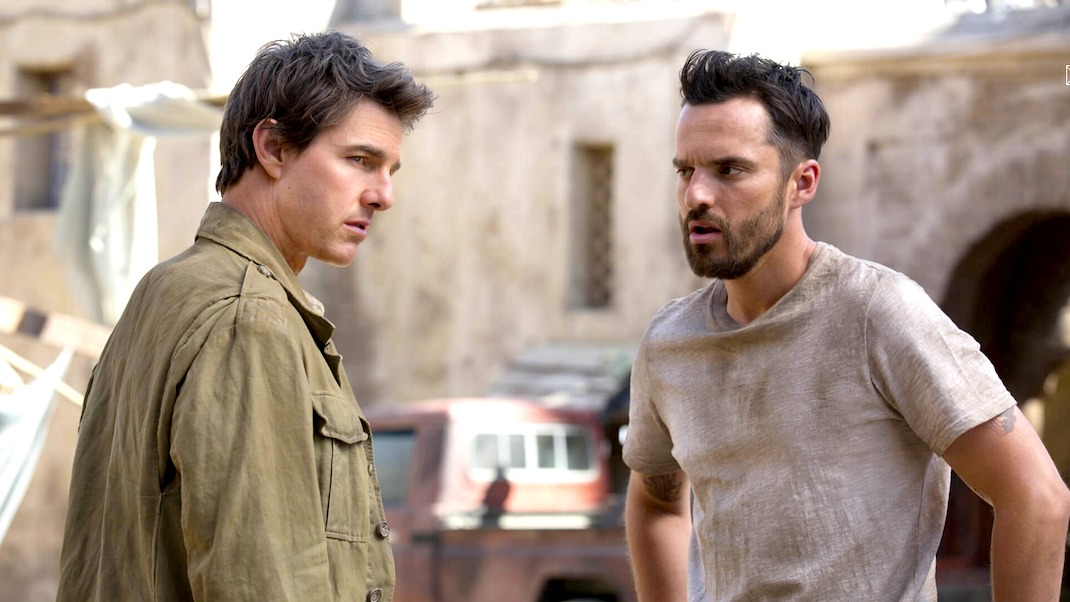 All of this—the wholesale slaughter of locals, the wanton destruction of ancient architecture, and the sexual manipulation of a woman for personal gain—makes Nick a dick, of course, but we're not supposed to think about it too much. (And reading Nick's actions as some kind of political commentary about the American presence in Iraq would be so far afield of this film's tone and depth as to be laughable.) While The Mummy flirts—pathetically, and unconvincingly—with being a "redemption" story for Nick, neither Cruise nor the film itself ever portrays Nick as anything worse than a charmingly smug rapscallion, a happy-go-lucky Indiana Jones for the 21st century. (Sir, I knew Indiana Jones: you are no Indiana Jones.) Indeed, this unapologetic machismo—combined with the willingness of Kurtzman's camera to ogle the female stars—makes the film seem carefully and cynically catered to the current backlash against "political correctness." It's as if Universal had decided to resurrect early 20th-century values along with its early 20th-century movie monsters.

(I'm harping on this too much, but I can't help it: a week after seeing Wonder Woman, this sexist, retrogressive, red-state-courting approach to making an action blockbuster sets my teeth on edge.)

But let us return—as briefly as possible—to the story of The Mummy itself. Soon, screwing around with ancient burial sites does what screwing around with ancient burial sites always does in movies: it has unleashed a seemingly unstoppable evil. Here, the evil takes the form of Ahmanet (Sofia Boutella), a sexually rapacious Egyptian princess with serious daddy issues, who was buried alive after murdering her pharaoh-father and baby brother and making a diabolical pact with Set, the God of Death. (I always thought Anubis was the Egyptian God of Death, but surely a film as well-researched and grounded as this one wouldn't get that wrong.) Freed from her Mesopotamian prison, Ahmanet gets to summon storms and reanimate an army of corpses, all while pursuing Nick, her liberator, whom she has chosen to be the vessel for Set's earthly incarnation (or something).

(In keeping with tradition inherited from the previous Mummy franchise, Ahmanet begins as a bandage-wrapped, desiccated corpse, and only becomes more human-looking as she proceeds to suck the life-force out of innocent victims. In keeping with the gender politics and lowest-common-demoninator intentions of the filmmakers, the female mummy here makes this transition very quickly. She also gains flesh and loses swaddling at a conveniently proportionate rate: by the time she looks like the stunning Sofia Boutella, Ahmanet is basically wearing a slightly distressed designer bathing suit.) 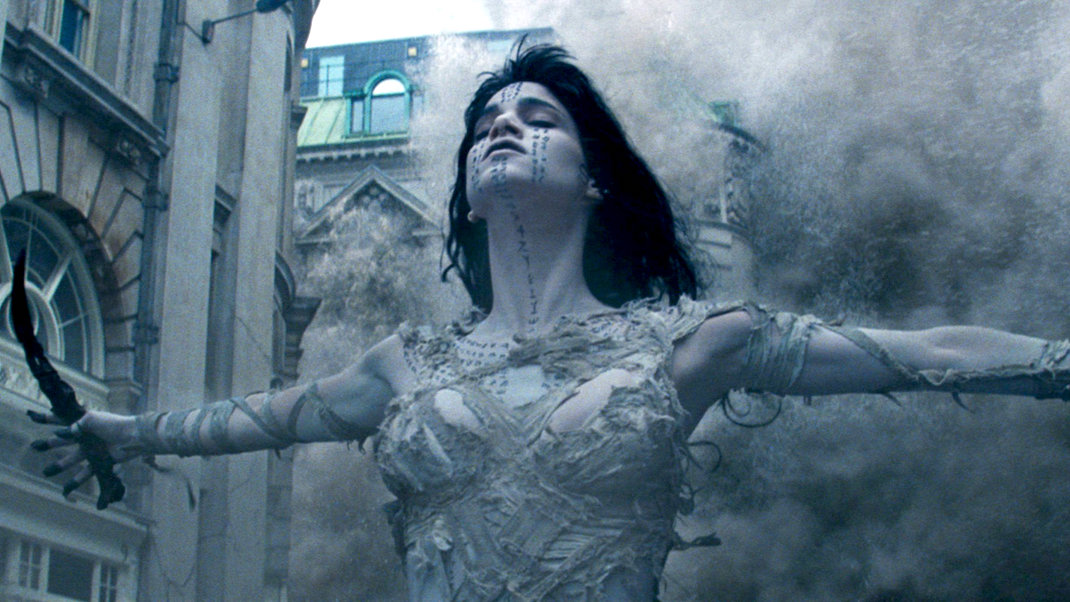 The Mummy throws everything at the screen—literally, if you see it (as I did) in underwhelming 3D—but nothing sticks. We have storms of sand, and flocks of ravens, and swarms of rats and spiders and zombies (oh my). We have plane crashes, and chase scenes, and many explosions that allow Tom Cruise to do his signature just-missed-by-a-flying-car dodge. (Doesn't he do that in every movie?) We have quests for magical weapons, and Crowe's secret society of monster-fighters, and Johnson's (confusingly ill-conceived) character stealing a gag from An American Werewolf in London without remembering to also steal the funny.

But none of it amounts to much of anything at all. The film is nominally based on a horror franchise, but there is no respectable attempt to scare anyone over the age of 8. The film's tone is light and comedic, but there is not a clever line of dialogue or a single authentic laugh to be found. There is a feint at a redemptive love story between the chemistry-poor Cruise and Wallis, but they spend all of their time kicking zombies in the face, and never spare a moment to even explain who their characters are, let alone develop a relationship between them. What we are left with, then, is a functional but non-memorable action movie, of the kind we have seen countless times before (from Cruise alone). And it's not even a good example of that: there is one decent action sequence during a plane crash—that's why it's in the trailer—but the rest of the set- and stunt-pieces are woefully uninspired.

I will now strain, for the span of a paragraph, to find something nice to say about the film. At 54, Cruise's continued willingness and capacity to do action movies is…admirable, I guess? (I'm six years younger than him, and I have trouble sitting in a chair long enough to write a review without my back hurting.) Boutella—a striking presence in Kingsman: The Secret Service and Star Trek: Beyond—is actually fairly good in her very thankless (and, of course, highly sexualized) role as the villain: it's not saying much, but she occasionally brings a teasing intelligence to her performance that makes Ahmanet the most interesting person on-screen. Crowe's job is mostly to make exposition dumps in an absurdly unconvincing English accent, but there is about a five-minute sequence—you'll know it when you see it—in which he seems to be the only person in the film actually having any fun.

Evil, according to Crowe's character, is a presence, which must be guarded against. But—not being of a superstitious or metaphysical bent myself—I've always thought of evil as an absence, a paucity of goodness, and we must be vigilant about fighting that as well. And that philosophy pretty much sums up my reaction to The Mummy. Its bad qualities are bad enough, but the largest problem is that there simply isn't anything good about it to compensate for the badness. There is no originality, there is no wit, there is no real excitement or emotion or surprise. It probably goes without saying—though it shouldn't—that there also is no meaning, or subtext, or beauty. There is, finally, no point, except that Universal dreams of a film series that can compete with Marvel's interconnected domination of the blockbuster market. (They seem to have missed the part where those films are successful because they provide wit, fun, and sympathetic characters.) Whatever the studio's hopes for its "Dark Universe," this lackluster movie sets the series off on an indifferent and instantly forgettable note.