47 Meters Down is part of My Summer of Summer Movies, in which I'm attempting to see and review every single film that opens (in Chicago) between Memorial Day and Labor Day. Read all about this ill-advised plan here.

My busy summer review-schedule has me frequently running from one screening to the next, and it is creating some interesting double-bills. Some of these pairings are just as odd as you might expect a completely arbitrary double-feature to be. (Seeing Churchill back-to-back with Captain Underpants, for example, made for something of a tonal mismatch.) But others have seemed quite perfectly designed, as if by some sophisticated computer algorithm or cosmic curator. Last night, I saw 47 Meters Down, followed immediately by Rough Night. My review of the latter follows here, but these otherwise unrelated films could easily sit side-by-side in a Netflix category called "Allegedly Smart Women Making Appallingly Stupid Decisions While On Vacation."

In Johannes Roberts' 47 Meters Down, the allegedly smart women are two American tourists, sisters Kate (Claire Holt) and Lisa (Mandy Moore), on vacation in Mexico. The appallingly stupid decision they make is to go scuba diving—though only one of them knows how—in a rickety shark cage, attached to a rusty crane, on a dilapidated boat captained by a sketchy and grizzled expat (Matthew Modine). One look at Modine's shabby, undoubtedly unlicensed operation should be enough for these women to know—as we do—exactly what will happen next. (And, even if they didn't recognize the obvious danger of being eaten by a shark, you'd think that fear of contracting tetanus would be enough to send them scrambling back to their hotel.)

But alas, the women are dumb, and so is the film, and so, the filmmakers assume, are we.

I appreciate that no one—unless they are watching Jaws for the 38th time—goes into a shark-attack movie expecting to marvel at the intelligence of its screenplay. But it is possible for it to be done better than this. (Last year's Blake Lively vehicle The Shallows was hardly a classic, but it was clear, somewhat clever storytelling, and it provided the suspenseful B-movie experience for which viewers of 47 Meters Down will be hoping in vain.)

Let us begin with the characters, since we can summarize with them with regrettable efficiency. I have already mentioned that they are sisters, and the only other information we are provided is that Lisa was recently dumped by someone—boyfriend? husband?—called Stuart. Beyond this, we know nothing. Who they are, where they are from, what they do, what their hopes and dreams may be: none of this is deemed important enough to mention. It's all about Stuart: Lisa originally planned to make this trip with him, and now everything she and Kate do—including their ill-advised underwater expedition—is with an eye towards getting photographic evidence that she's not really as boring as Stuart thinks she is. (Spoiler alert: she kind of is.) 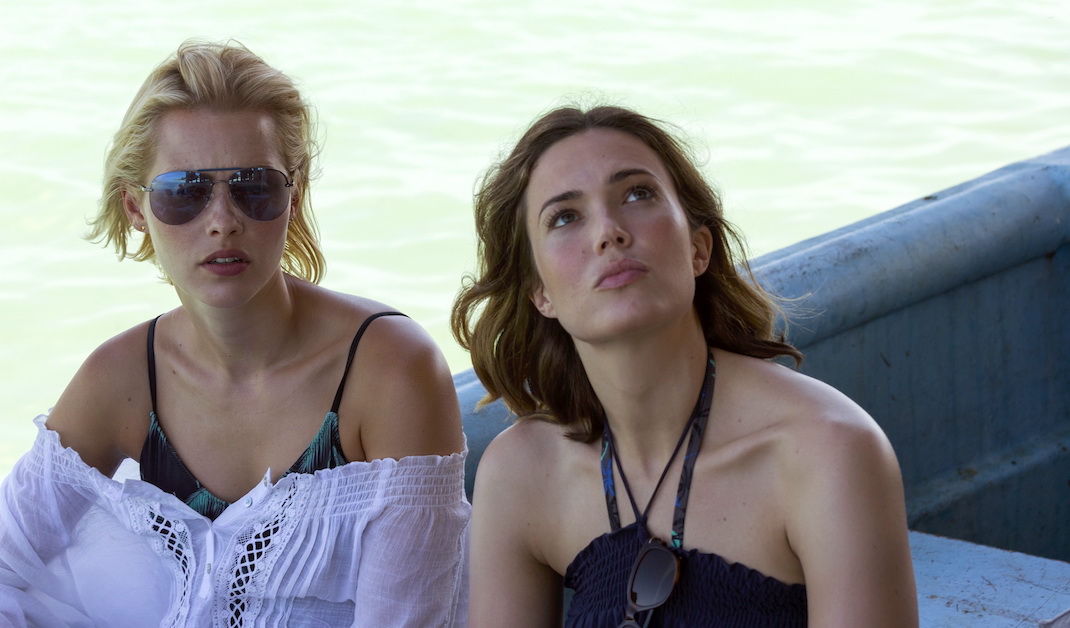 Moore and Holt are both fine, but Meryl Streep couldn't make a character out of what they are given. For most of 47 Meters Down, Lisa and Kate are the only humans on-screen, and they talk constantly, even after they predictably end up at the bottom of the sea surrounded by toothy predators. But—when they're not talking about running out of air or becoming fish food—they mostly talk about Stuart. To pull off a talky, all-female two-hander like this, and still nearly fail the Bechdel Test, demands such a high degree of difficulty that one almost has to begrudgingly admire the scope of this dubious achievement. (One suspects it could not have been accomplished without two male screenwriters, director Johannes Roberts and co-writer Ernest Riera. These men seem to have not the slightest idea how human beings talk at all, let alone what two women might find to talk about other than how to make themselves interesting to men.) 47 Meters Down could have been improved—at least marginally—by dispensing with the convenient radio-linkage of the sisters and making the underwater scenes play out in spooky silence. It might have elevated the level of suspense—which, as we shall discuss, is otherwise sorely lacking—and the film definitely would have benefited from removing 90 percent of the brain-dead dialogue.

So any expectations the viewer might have of developed characters or emotional poignancy must be abandoned, leaving only the hope of submerged, white-knuckle thrills. Here, too, the viewer will be thwarted. Though 47 Meters Down is nothing but contrived tension on paper—sharks! faulty equipment! limited air! the threat of hallucinations or a fatal case of the bends!—Roberts doesn't have any idea what to do with any of it. Some of the underwater cinematography (by veteran Mark Silk, a specialist in the field) is lovely and appropriately eerie. But, as a director, Roberts' visual storytelling is as murky and impenetrable as his setting, and he has no gift for manufacturing the kinds of terrifying experiences he wants to provide. He can make the audience jump—by suddenly smashing a shark into the screen, for example—but every jump-scare seems random and fleeting: there is none of the patience and sustained tension required to create real suspense. (To paraphrase Hitchcock's famous bomb-under-the-table example, you have to show the audience the shark ahead of time for its presence to be suspenseful: if it just appears and bites your face off, all you have is surprise.) Roberts is working with infinitely better sharks here than the notoriously awful one from Jaws, but he never manages even a fraction of the tension Spielberg generated with a few yellow barrels.

I won't spoil the "plot," which comes conveniently pre-spoiled. (A blonde party girl, and a nice, more sensible brunette, go into the water with sharks. Want to make any bets about who comes out alive?) Of a film-ending "twist"—which I am very tempted to spoil, if only to discuss the shamelessly disingenuous trailer—the less said, the better. It is an awful, pointless cheat, stolen unimaginatively from far better films. I strongly recommend you don't see this movie at all, but, if you do, you will see this twist coming—from a nautical mile away—without any help from me.

Reportedly, 47 Meters Down began life as a direct-to-DVD release, but got promoted to the multiplexes after the unexpected success of The Shallows. Alas, it should have stayed in the bargain bin. Now, having chosen to swim in the unforgiving waters of summer blockbusters, it deserves its soggy fate: to become bloody chum for critics, and to sink to the bottom of the sea with the other garbage.