When I decided to start reviewing Louie, I honestly didn't know what I would find to write about each week. I've always loved the show, but I'd never really sat down and thought about it in the way that reviewing something forces me to do. Would I find there was really enough to unpack in the average episode of Louie, in that long-winded, overly-analytical way I enjoy? Or would I just find myself saying variations on That was really funny! every week?

As it turned out, finding things to say about Louie has not been a problem. In fact, writing about Louie so far has been a revelation, and a confirmation of what I'd long suspected: there's a lot going on in the average episode of this show. I've been amazed to discover, as I wrote, that the show's shaggy-dog-story format is almost always deceptive, an illusion of improvisation and randomness cast over something that is very carefully crafted, very deliberately thought out, and remarkable integrous.

But, at first glance, "Sleepover" is exactly the kind of episode I used to worry about, back when I worried about how the hell I'd write about Louie. It begins with a play, segues to a child's sleepover, pauses for a romantic and sexual phone call in the middle, takes a third-act detour to a police station, and inserts a short, stylized black-and-white silent movie about a man, an old woman, and a goat. This is about as shaggy as Louie's shaggy-dog stories get, and when the episode ended I honestly didn't know what any part of it had to do with any other part. I mean, I enjoyed it—don't get me wrong—but was it just a bunch of disconnected shit that happened?

After watching "Sleepover" a second time, I think the answer is yes—and no. It is just a bunch of different shit juxtaposed, but that very juxtapositioning is also the point. 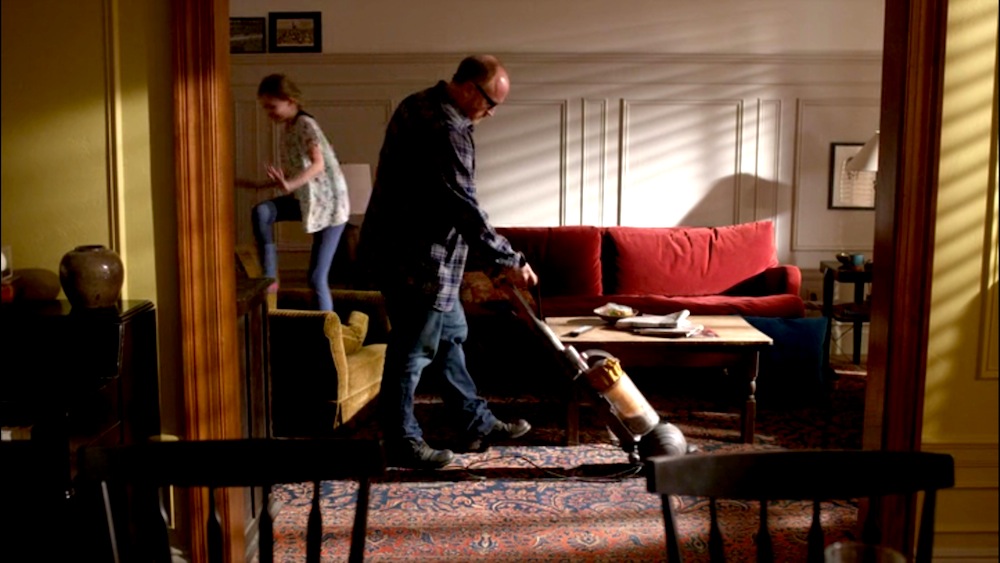 Because pretty much the entirety of Louie's personal life is represented in "Sleepover." (It's interesting to note that his professional life is very carefully not represented: there are no stand-up sequences to open or close the episode, and we don't even get the credits sequence of Louie walking into the club.) But most other aspects of Louie's life are there: he's the father of two very different girls. He's divorced. He has a love life, and a sex life. He has a doofus of a brother.

It is tempting to say that all of these things bump up against one another in "Sleepover," but what's fantastic about this half-hour is that there's no little or no bumping: all these things are part and parcel of the same life, to the extent that integrating them isn't even a big deal. (Think about how another comedy—just about any other comedy—would have either excised some of these storylines from the others, or at least made a big zany deal about Louie running around trying to juggle them.) To the extent that Louie is ever a sit-com—and this is one of the most sit-commy episodes in a while—it's a holistic sit-com, one that recognizes that nobody is just one thing, and no single day is just one way. Initiating phone sex with his estranged girlfriend, or bailing his brother out of jail after he's been caught in a massage-parlor raid, is not really a departure or distraction from Louie's role as a father: this is just who Louie is. If Louie is a situation comedy, the situation is just his life.

So I think the variety of what happens in "Sleepover" is part of the point, a wonderful recognition that adult human beings have full, rich lives, and that parents are not (and do not need to be) the paragons of wholesomeness we're used to seeing on sit-coms. I'd put Louie down as one of the greatest dads in television history, and one of the things that makes him great is that he's a real person, with a complicated life, in a way avatars of fatherhood like Ward Beaver and Cliff Huxtable never got to be.

But, on a deeper level, the integration of these adult elements with a child's birthday party also makes "Sleepover" about the fact that Louie's little girls are growing up. There are several fleeting moments that touch on Louie's anxiety about this. In the play Louie and Lilly watch, for example,  there's a scene in which Matthew Broderick's middle-aged character seems to be tempted into a sexual dalliance with a blonde teen-aged girl (Hannah Patelunas), and we see Louie cast a concerned glance in Lilly's direction. Then there is the scene a little later, where Lilly says—in response to Louie's worrying—that no one gets murdered or raped on a Saturday morning. (Louie doesn't even want to hear her say those words, and when Jane wants to know what "rape" is, he stammers lies to change the subject. "It's just bad, a bad thing, about bad things," he says. "Financial things.") 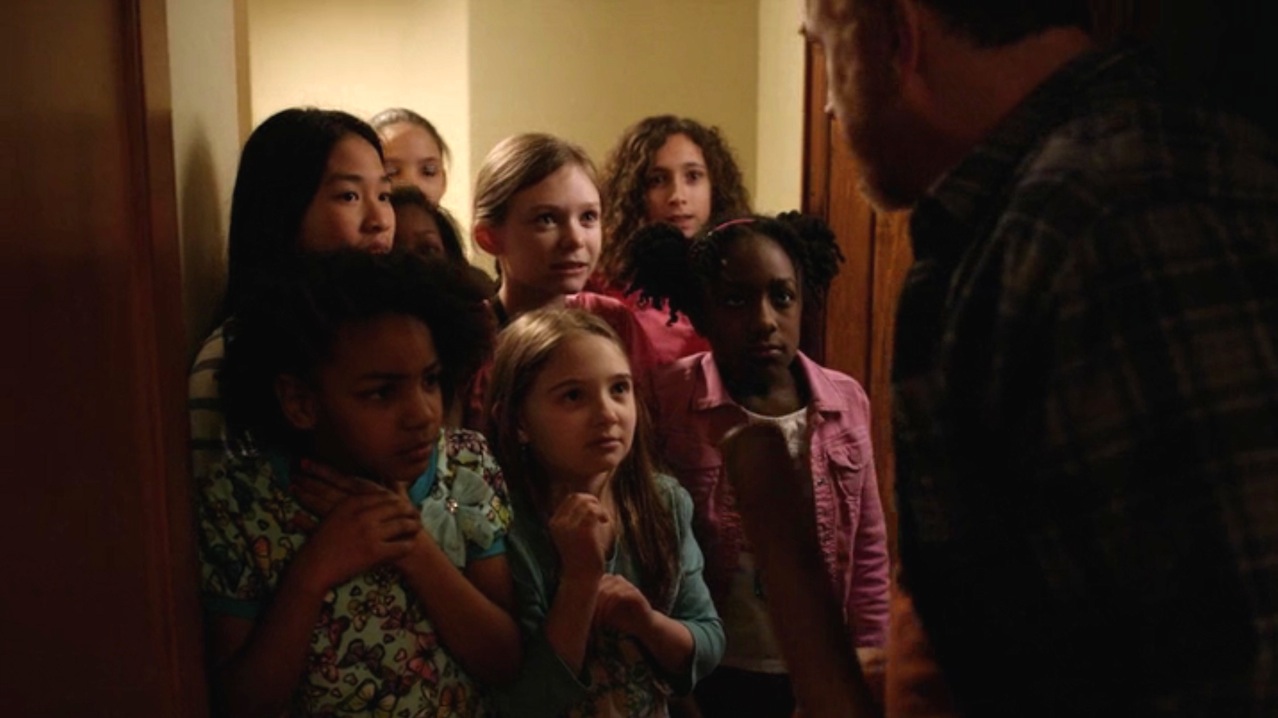 Louie can try to protect his girls—pushing a dresser in front of his bedroom door, and standing with a baseball bat between them and adulthood—but they are growing up. Lilly is already a smart, confident, adolescent young woman with a rich inner life of which Louie understands little. The Season Three episode "Lilly Changes" marked the moment when he began to be aware of her growing up and pulling away from him. Last season, in "In the Woods," he caught her smoking pot, and his initial instinct was to lecture her. But then he flashed back to his own memories of what a complicated, secretive time the teen-age years really are. He still thinks of Lilly as a naive, innocent little girl, but he was able to make the sympathetic connection to his own adolescence, when he was not so naive and not so innocent himself. At the end of that episode, Lilly is expecting a lecture, but Louie says he doesn't have one. "Just, goodbye to your childhood, I guess, maybe." Louie says. "Just, I love you, and I'm here. That's all I got."

Jane, younger, is not quite at puberty yet, but the way all these adult things orbit her 10th birthday party captures Louie's awareness that she, too, is growing up. "Oh my god, I just remembered," Jane says to her friend Shasta (Delphina Belle). "I should be wearing my pink clothes today, because I'm turning 10!" Jane, coming into her femininity (and so ready to wear pink), is at the brink of a transformation that Lilly (who is wearing pink) has already been through. Sex, divorce, relationships, getting arrested, and all of these other adult things are just a part of life, and the way they swarm around these screaming pre-teens at a birthday party is a reminder that the adult world is not far off for Louie's girls.

But all of this not presented, necessarily, as a terrifying thing, either. Louie is as anxious to protect his daughters as any father, but there's also an acceptance of reality in the way Louie just casually takes all the girls along to the police station, and in the way he slams the door on Shasta's mother (Finnerty Steeves), who is about to complain about how Louie talked to Shasta about her parents' marital troubles. You can try to spin elaborate stories to keep children innocent—like Uncle Bobby's magical fable of his arrest—but they won't work for much longer. (Already, Lilly would not have bought Bobby's story.) The kids are going to grow up, and they're going to inherit the rich and complicated adult world just on the other side of the bedroom door, and that's both inevitable and the way it's supposed to be. 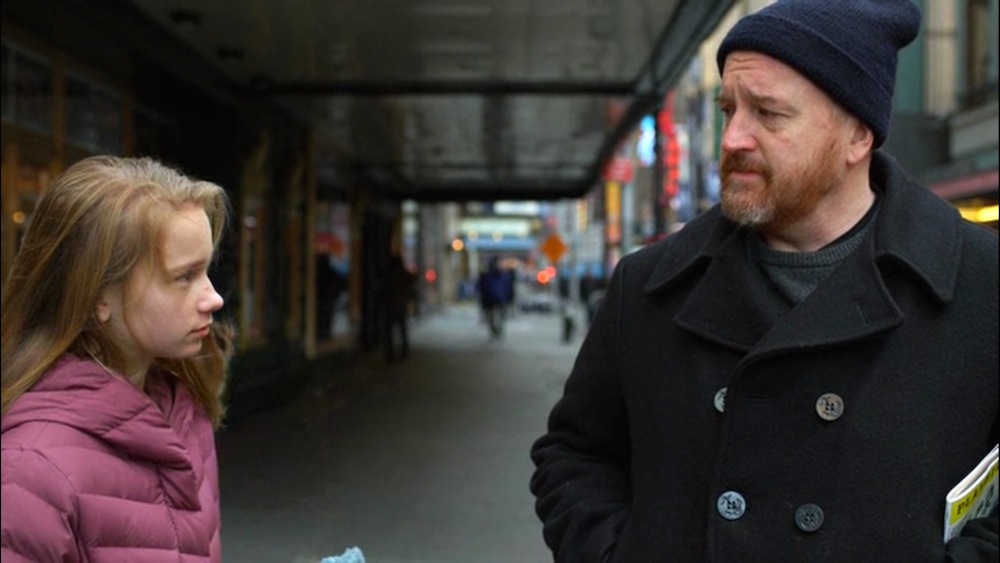 Which is what ties the second half of "Sleepover" back to the fantastic scene between Lilly and Louie, and echoes back further to the disconnected scene in "Cop Story" in which Louie got lectured by a young store owner. The scene on the street is a variation of that earlier conversation, in which Louie begins in the self-righteousness of the older generation towards the younger, and ends up in begrudging admiration after he's learned something.

Lilly was not distractedly texting her friends during the play: she was actually learning about the play. Those of us of Louie's generation or older—he and I are roughly the same age, for the record—may well still bristle at the way young people feel the need to "appreciate a thing and Google it at the same time." But Louie's assumption that Lilly didn't care about the art is just flat-out wrong: in fact, she was engaging with the work of art on a deeper level than Louie himself was doing. In some ways, she's the adult, or at least she's the rightful inheritor of the age that's leaving Louie behind. "It was really sad, and it was beautiful," Lilly says of the play. "I didn't cry like you, because I'm not a baby. But just because I can appreciate something on two levels doesn't mean I don't deserve to have a phone." (As we see later, a phone is a symbol of the adult world—it is Louie's bridge to sex and love, when he's trapped with a horde of screaming children—and Louie, wisely, isn't going to take Lilly's away.)

"Doesn't it follow that, if you're a good parent, and your kids evolve, and are smarter than you, they're going to make you feel kind of dumb?" the young store owner asked Louie in "Cop Story." "So if you feel stupid around young people, things are going good!" Louie's daughters will grow up: they will wear pink, and they will learn about the adult things that now circle their childhoods, and they will engage with the world in ways Louie himself cannot.

It's a little scary—and it will often make him feel stupid—but it's also exactly what's supposed to happen. It means things are going good.