Once again—as with the season premiere, "Pot Luck"—there's an obvious double-meaning in the title of this week's Louie. "A La Carte" is composed of three (arguably four) short vignettes, which vary drastically in tone, and which don't, on the surface, relate to each other very much. Season Four was prix fixe, but Louis CK is clearly determined to make Season Five a potluck, an a la carte menu, a Gumpian box-of-chocolates. Like Pamela's fantastically funny shutting down of Louie's poignant childhood reminiscence—"I don't want to hear this: it sounds long"—it's a winking, not terribly subtle acknowledgement that last year's experiment with longer-form storytelling was met with a decidedly mixed reaction.

So what can Chef Louis bring you this evening? You like poop jokes? Here a poopy apéritif. You like the behind-the-scenes comedy stuff? Here's a soupçon of material about being a stand-up comic. Did you come for the relationship story? Try the entrée of thwarted monogamy—it's excellent today—with a side-order of flirty movie-theater foreplay. Tonight's Louie is serving something for every taste, and—in case you've got somewhere to be—the entire meal will only take you 22 minutes to consume.

However, if you do choose to linger a bit over your food, you may appreciate that this seemingly random tasting menu has actually been assembled with a lot more care than that. As with all the great chefs, Louis CK's flavors speak to each other across the courses, colliding and recombining on the tongue to enhance and enrich the entire experience. 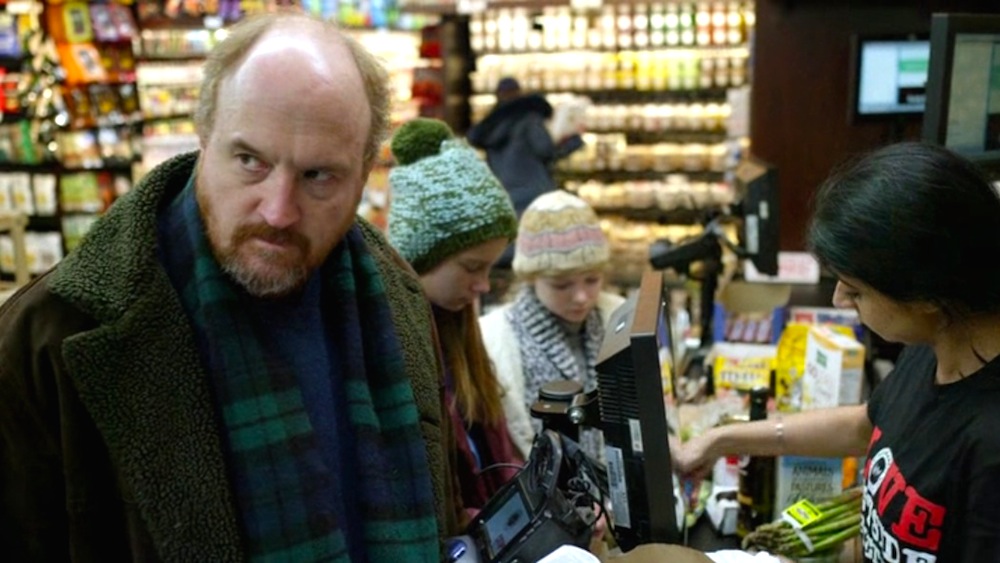 Take, for example, a seemingly throwaway bit from the opening scene. Louie, shopping with his daughters, picks out a brand of crackers they hate. "If I get the ones you like, they'll be gone in a day," he explains. "That's really depressing," Lily says of this philosophy, and Louie agrees: his mother, after all, did the same shitty thing to him. (It doesn't stop him, of course: he drops the unwanted crackers in the cart anyway.)

Buying something you don't even want, just to make it last longer: isn't that exactly what Pamela talks him out of doing at the end of the episode? "I don't know why I'm on this side of the argument," Louie admits, after he has tried—and failed—to convince Pamela they should live together. "I guess I'm just insecure." He doesn't really want the life he describes to her, the life that would make them both miserable, the life they both know will eventually lead to ruin. He just wants what he has with Pamela to last.

Being scared and insecure is okay, Pamela tells him, but life is too short to buy the tasteless crackers you don't even want. 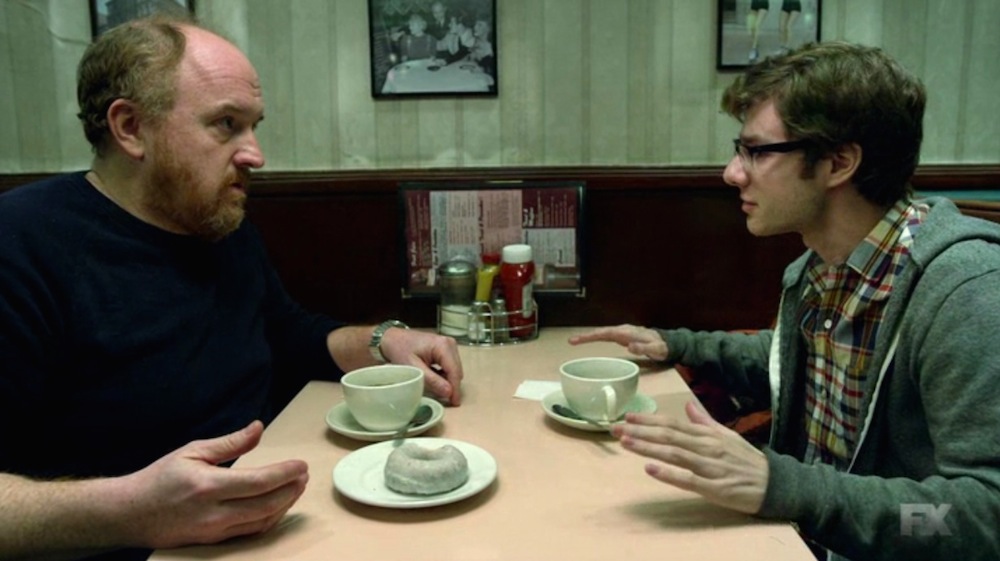 Or, if you like, let's put it another way: you have to start with what makes you laugh. This is the advice Louie gives to hopelessly unfunny "comic" Bart Folding (Nate Fernald), but Bart doesn't even know what makes him laugh. (One suspects that nothing makes Bart laugh.) The answer he gives when Louie asks him—"Lucille Ball and Buster Keaton"—is insanely incongruous with Bart's act, of course. But—more importantly—it's also a rote, second-hand idea of funny. It's not coming from within, because it's not who Bart is: it's an external, socially agreed upon notion of what's funny, of what a comedian should look like.

And again we can come back to the conversation between Louie and Pamela in the restaurant. The life Louie thinks he wants—a life of monogamy and domestication—is not who he is; it's just an external, socially agreed upon idea of what love is supposed to look like.  "I want what couples say," Louie said, the last time they had this fight, back in the Season Four finale. "I want you to say things to me, like that you love me and you're my girlfriend." Louis was ridiculously happy, but it wasn't enough: he wanted—or thought he wanted—his happiness to look like everyone else's. He thought he was supposed to have the prix fixe menu, with all the standard courses in the proper order. 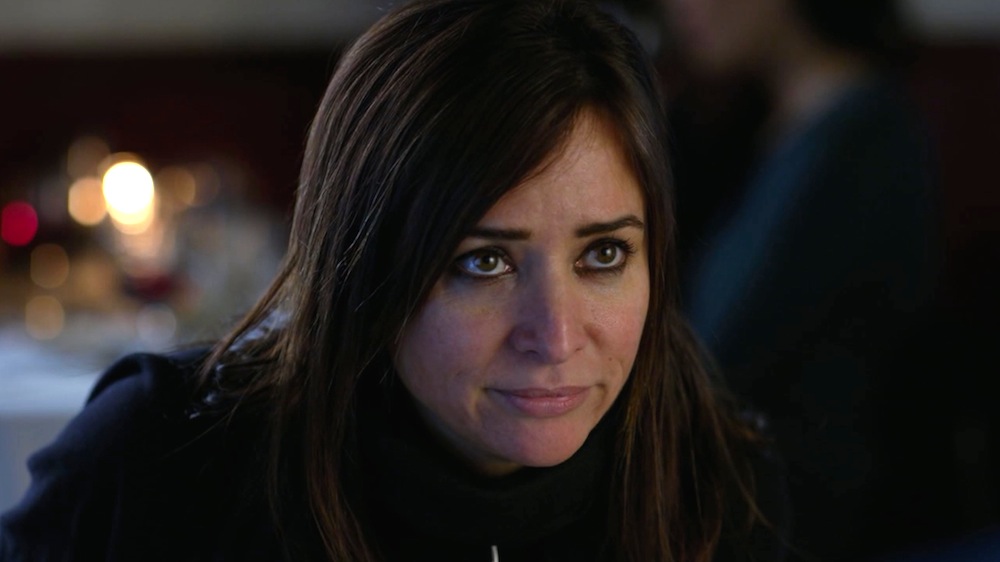 Pamela is a little mean in the restaurant scene—Pamela is often a little mean—but she is also very wise, and very right. "There's more than one way to be together," she tells him, and you have to start with what makes you laugh, with what makes you happy. "Don't you want to stick your dick in a bunch of ladies' strange holes?" She's rejecting the prix fixe menu, refusing to surrender to a traditional relationship model. And here it calls back to yet another seemingly throw-away joke: the arty, black-and-white French film about divorce that Louie takes her to see, and which—like the crackers–neither of them will enjoy. "She was a failure in every way as a woman," a male narrator intones, as the woman on the screen looks miserable. Pamela is rejecting the narrative in which a woman who doesn't end up in the standard domestic version of love is automatically a failure, and she is refusing to be objectified by love. "I'm not yours and you're not mine," she says. "But guess what? I love you right now." It's the first time she has ever said "I love you," and the fact that it comes couched in this powerful declaration of independence is their relationship in a nutshell.

There is another level of self-awareness in all of this, in which CK is acknowledging his own refusal to follow traditional narrative models. I suggested last week that their new relationship poses a long-term problem for this show, but here CK is announcing his intention to deal with The Pamela Problem in his own non-traditional way. Because, from a creative standpoint, everything Pamela says about relationships is doubly true of relationships on television: all roads lead to ruin. To force the Louie-Pamela love story into a traditional model would be creative death: death for their relationship (which would inevitably be doomed for dramatic purposes), and death to an infinite number of other storylines—like last week's seemingly discontinuous Julianne story—that CK could no longer tell. This way, both the characters and Louis CK get to hold onto their freedom, and go wherever their stories take them.

Meta- is an overused, potentially annoying prefix when describing artistic works, and meta-commentary for its own sake can be self-indulgent and pretentious. But Louie's frequent commentary on its own narrative is almost always worthwhile, even essential. He's not just winking at the audience or showing how clever he is, he is actually saying something; he's just doing it on several levels at once. 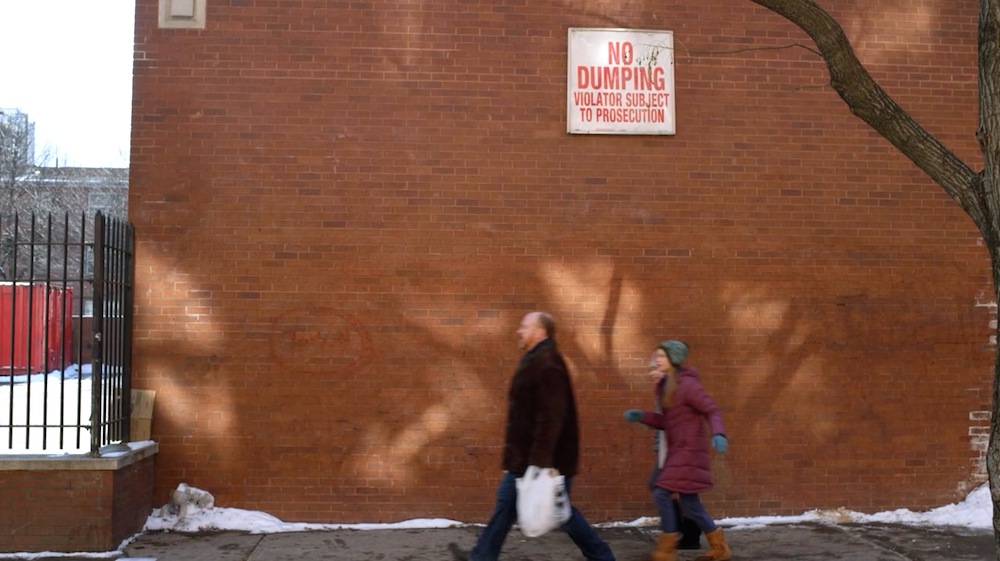 Take, for another example, the poop. I confess, I'm not a big fan of poop-jokes, which are generally the very definition of lowest-common-denominator humor.  So I groaned a little in the opening minutes of "A La Carte," and worried I'd end up having to write an entire review about how Louie had—literally and figuratively—shit his pants.

But I should have known to give CK the benefit of the doubt. As poop jokes go, this one does work: it becomes increasingly funny as the emergency becomes increasingly imminent, and then finally inevitable. It finds glorious moments of fleeting comedy, from Louie's discarding his groceries in a garbage can, to the cop who (understandably) refuses to help, to the giving-no-fucks store clerk who casually calls Jane "a little white bitch." And the entire scene finds its humor not in poop itself, but in the way all three characters react as though the stakes are life or death. It's a heroic battlefield sacrifice scene translated into the language of ordinary life: I'm not going to make it! Just go! I love you!

One of the things this episode explores is the hard truth that not everyone can do comedy: just because it looks easy doesn't mean it is. "Anybody can get on stage: doesn't that sound great?" Louie says sarcastically, when introducing the open-mic show. The first comic we see is terribly unpolished, but passable. (And, incidentally, his one joke—about how all the women he sleeps with tend to be the same: plastic—speaks to the overall theme of men being uncomfortable with women who have their own independent ideas about who they are and what love should be.)

But it's the second comic, Bart, who really gets at the essence of what comedy is, and is not. Bart truly is "just a miserable guy whining about his life." He explains to Louie that, in comedy, "you're supposed to tell the truth. You know, be like honest and stuff." But he has no craft, no insight, and—worst of all—no humor. ("I don't even know that those were really jokes," Louie says gently.) Bart—locked into his own narrative—is not doing comedy. Bart is just doing what Louie categorically refuses to do: he's pooping in public. (We could also call it "jerking off in public," or—as Pamela calls it—"doing a Pee Wee Herman.")

The end of the Bart storyline is a predictable bit of punishing cosmic irony—the kid becomes a star, and kills on The Tonight Show—but that doesn't for a moment mean that Louie is wrong. People like Bart can find their fifteen minutes of fame, but just shitting on stage is not comedy, even if you do it in a squeaky voice.

Comedy is being open to following the narrative where it needs to go. Comedy is finding the humor and insight and wisdom in the shit: if you can't do that, you have no business doing it in public. Comedy, in other words, is art. And so is Louie.