Louie is a show with unusual—even legendary—flexibility. When Louis CK agreed to make a show for the FX Network in 2010, he accepted less up-front money in return for almost unprecedented creative freedom. This deal—reportedly referred to enviously as "the Louie deal" by other comedians—has let him tell whatever kinds of stories he wanted to tell. The show has told stories of varying length, completely disregarded continuity, frequently detoured into surrealism, and run a tonal gamut between the crudely outrageous and the poignantly sublime. Louie often seems less like a TV show, and more like a serialized film festival with only one auteur.

Last year's fourth season saw CK stretching his creative wings further than he had before, experimenting with both form and tone. Building on the success of Season Three's three-part story "The Late Show," CK used Season Four to explore longer story arcs, mostly focusing on the character's relationships with women. One story ran six episodes; another ran three, with a solemn two-part flashback to Louie's childhood stuck in the middle. All of them—though still reliably funny—seemed less concerned with pushing the humor: the breathing room of the longer, slower arcs let CK find more natural storytelling rhythms than he had before, and allowed both the jokes and the emotions to rise to the surface more organically.

(Some viewers and critics apparently found the change boring: for the record, I thought it was brilliant, and I have never regretted not writing about a season of television more.)

CK has said that Season Five will be a return to form, a little more "laugh-centric" than the previous season. Certainly, "Pot Luck" bears more resemblance to one of the show's earlier episodes, a self-contained shaggy dog story with no apparent concern with continuity. Last season left Louie in an unusually happy and hopeful place, finally in a relationship with Pamela (Pamela Adlon) after four seasons of unrequited love. In this season's premiere, however, Louie is depressed, alone, and ready to have a quickie with a pregnant stranger on a moment's notice.

(We probably will find out what happened between Louie and Pamela, but it would also be just like this show to never explain this episode's apparent disconnection. Maybe this story takes place before that relationship; maybe it takes place after. Who cares? That's one of the greatest things about Louie: if CK wants to tell a story about a pregnant woman's water breaking all over his dick, he's not going to let a little thing like continuity stop him.)

To make the obvious joke—and one I wonder if CK intended—Louie itself is a pot luck: you get what you get. And—to push the thin metaphor further—Louie doesn't make desserts. Though the show is capable of delivering moments of startling beauty and even transcendent joy, such moments are always hard-earned, bittersweet, and short-lived. Louie was as happy as we'd ever seen him at the end of last season, but we knew that couldn't last: the show had to either end there or else return Louie to his natural, sad-sack state. Louie is, in many ways, a 46-year-old Charlie Brown: he'll always get rocks in his trick-or-treat bag, he'll always buy the wrong Christmas tree, and he'll never, ever kick the football. 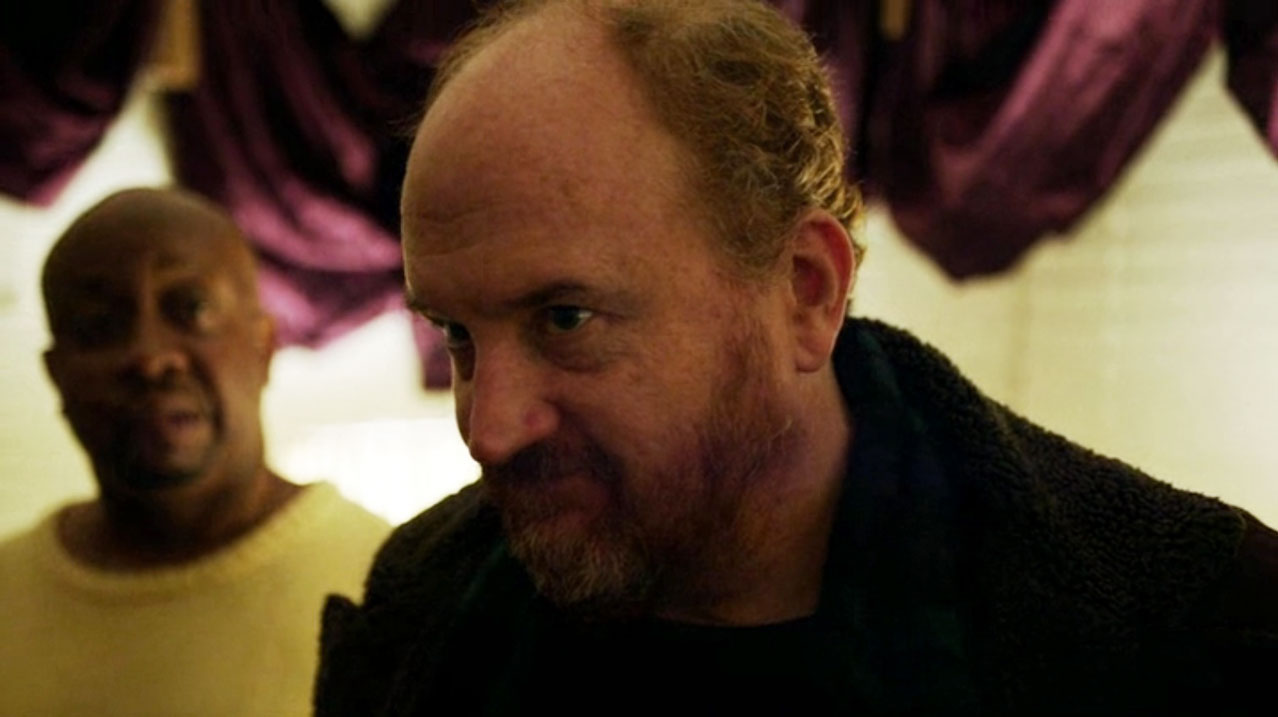 For if there's one thing that's consistent in this remarkably changeable show, it's that Louie is chiefly a cartography of discomfort. CK is carefully mapping the geography of awkwardness, of embarrassment, of social unease. "Pot Luck" is Louie in its simplest form, just moving its titular character from one disconcerting encounter to another. ("I don't think there's a good version of the we-found-another-planet-of-people story," Louie says in his cold-open stand-up act. It's hard to disagree with his pessimism about the search for extraterrestrial intelligence, but Louie has proved that there's rarely a good version of any story about meeting new people. You may think getting picked up by a rich and beautiful model is the greatest thing that ever happened to you—as in last season's "Model"—but in the end you're probably going to end up getting sued after you accidentally elbow her in the face.)

Nonetheless, "Pot Luck" finds Louie attempting to be social, after recognizing—when his own therapist falls asleep on him—that depression and existential despair just make him "a boring asshole." (This is very possibly another meta commentary on last season.) His decision to go to the class potluck accidentally lands him first on another planet, a strange cult gathering where people greet him warmly, and an entire community manages to ask those existential questions that he himself can't articulate. Why are we here? Where do we come from? What do we say when we know ourselves? Louie, of course, doesn't know, so he doesn't get any answers: they just take his fried chicken.

What I love about this scene is where it doesn't go. A typical sit-com would have made this a whole thing, with Louie drawn temporarily into the cult, tempted by the fact that it is a much, much happier gathering than the one to which he is actually headed. But Louie doesn't belong among these people, and he and they and the show all know it: after the initial misunderstanding is cleared up, he's unceremoniously exiled with just one useful bit of advice: "Forgive yourself."

At the actual potluck, no one hugs him, no one is excited to see him, and no one is happy. These people are awful, none more so than the host, Marina (Judy Gold), who hates Louie for no discernible reason. As always, Louie shines in the small moments: in charting the coastlines of discomfort, CK doesn't just find the major landmarks, but explores every tiny shoal and inlet. I loved the privileged obtusiveness in how Marina and her partner treat their surrogate, Julianne (Celia Keenan-Bolger), talking about her but not to her, and bragging about how she'll receive no pain medication at a non-sanctioned birthing facility. (It's a nice touch—and a show of Louie's decency—that he's the only one who actually attempts to talk directly to Julianne.)

And I adored the fleeting moment in which Louie tries—and fails miserably—to come up with a nice way to say that his daughter Jane (the preternaturally talented Ursula Parker) is beyond taking introductory violin lessons with some woman's son named "Checkers." "Yeah, yeah, yeah," Louie mumbles to the woman. "She's…better than you." It's a horribly offensive thing to say, but it's also a moment of raw and terribly sweet parental pride. It's a necessary core belief for Louie—who introduces himself repeatedly as "Jane's dad," and once said he thought he'd kill himself on the day he was officially no longer a father—that his children are better than everyone. 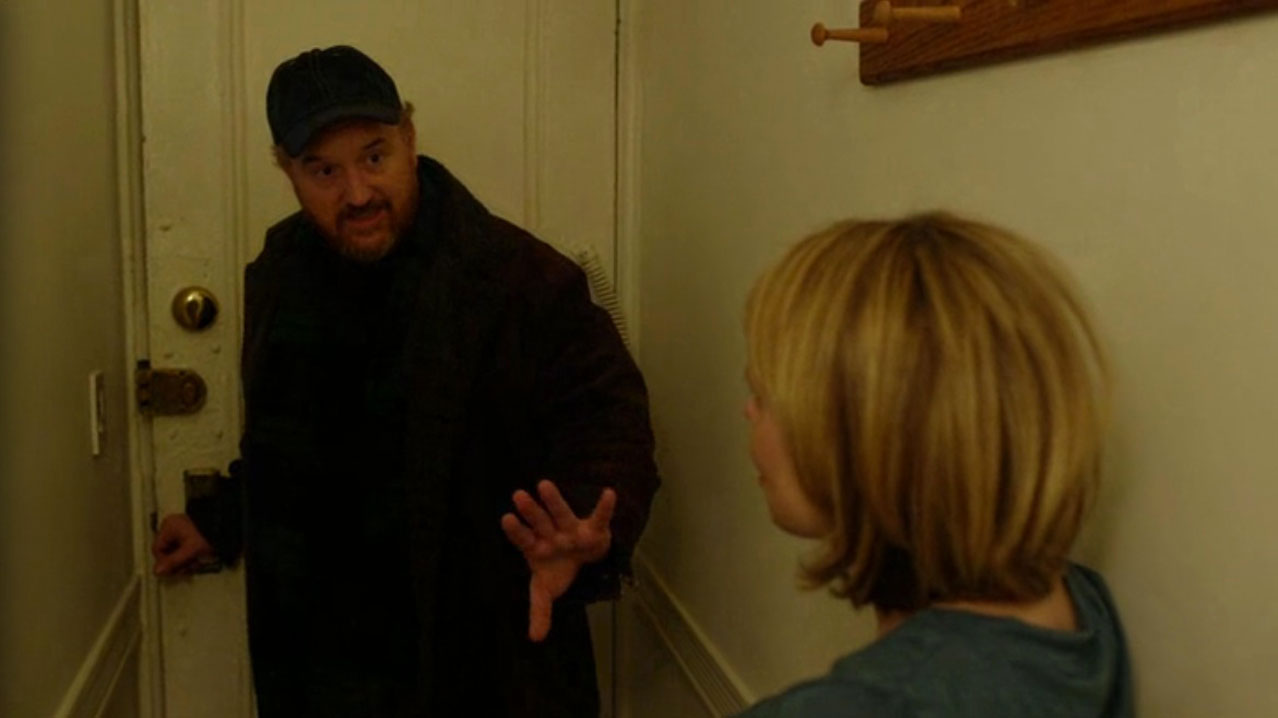 It's another hallmark of this show that it can transition from all these subtle and minor moments of social awkwardness to a crude and absurd major one: fucking a pregnant woman into labor. But even here the broad comedy is textured with genuine humanity and CK's remarkably keen eye for nuances of behavior. It is the simple sound of a man peeing in her bathroom that reminds Julianne how alone she is, and how this surrogate pregnancy has dehumanized and desexualized her. And Louie—who is, fundamentally, a kind and decent man—not only says exactly what she needs to hear, but waits to say it until his hand is on the doorknob to leave so she doesn't think he's hitting on her. "You're like a classical painting of, like, a life goddess, if it was in Playboy in the '70s," he says. "Like, seriously, you're erotic, and gorgeous, and cute, and you're lovely, and I wish I could look at you all day long."

(On some level, of course, he probably is hitting on her—in the hopeless, semi-conscious way that men are always trying to get laid—and watching all of this play out in that narrow hallway just reminds us what a terrifically nuanced actor CK really is.)

In the hospital, Marina is furious with him. "Do you know how hard we tried to have this baby in our way?" she says. "And you went and jizzed all over his face?" ("I didn't come," Louie mumbles, because this seems—in this awkward moment—like an important point of clarification.) But just as Louie received a useful bit of parting advice from the cultists, he leaves this awful woman with the best, and most useful, and most honest bit of advice about parenting that she'll ever get. "I'm sorry," he says. "Some things don't work out the way you planned them."

That's the one existential truth Louie knows for certain, and it's probably the core lesson of the show in general: life is a shitty, awkward pot luck, and things rarely turn out the way you thought they would.