I only have time to write full reviews of one or two shows a week, so "What I'm Watching" is where I get to briefly discuss the other shows I'm enjoying, hating, or just consuming. Basically, it's a week in the life of a television junkie.

It was a relatively light week of television gorging here at The Unaffiliated Critic, as most of my "serious" TV-viewing time was spent catching up on my binge-watch of Breaking Bad. Still, there are 168 hours in a week, and anyone who can't manage to spend at least half of them watching television just isn't trying. Here's how I managed to while away a few of them…

There weren't many premieres this week—and fewer still I was interested in watching—but I did catch two flawed but potentially interesting new shows. 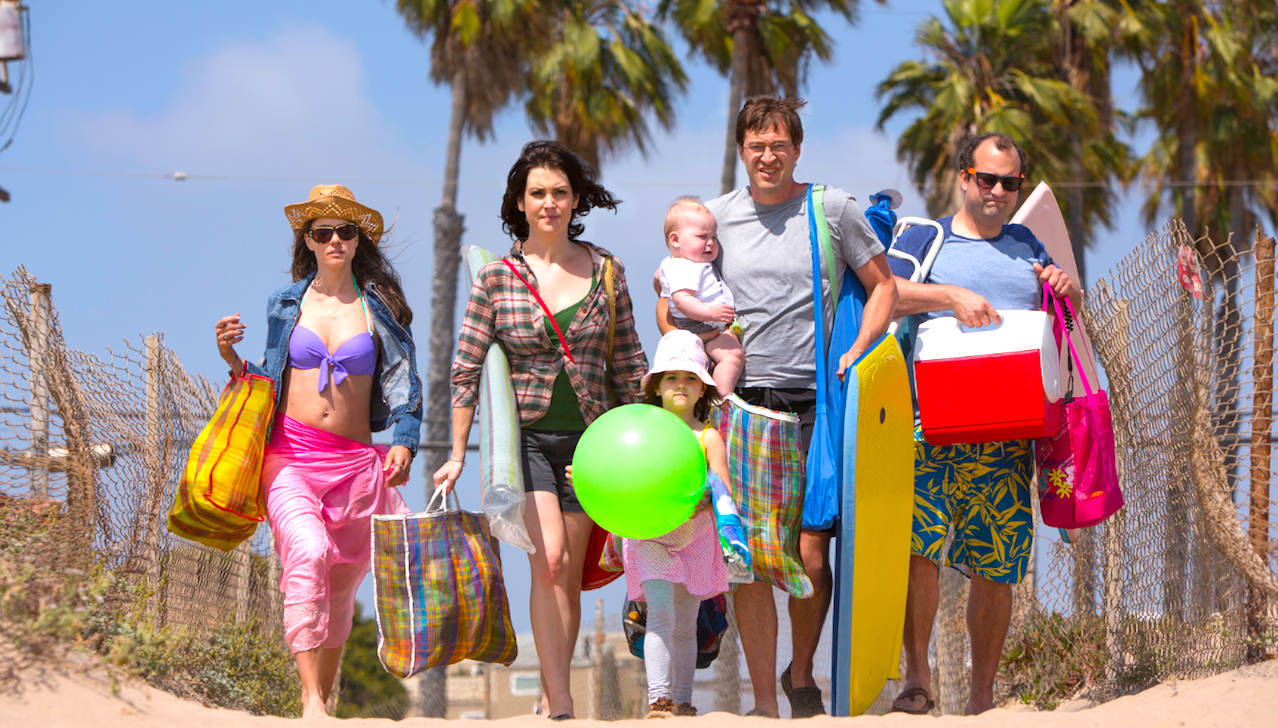 Togetherness (HBO, Sun. 9:30/8:30c), the new series from the Duplass Brothers (Cyrus, Jeff Who Lives at Home) manages to work a lot of my pet peeves into one quick half-hour. For one thing, it seems—based on the pilot at least—to take place in a magical, all-white version of L.A., a west-coast counterpart to the homogenous Brooklyn of HBO's Girls. For another, it focuses on characters in their late-30s and early-40s who seem to have the emotional maturity of teen-agers. But Togetherness also has a lot going for it. Mark Duplass and Melanie Lynskey, both excellent, play Brett and Michelle Pierson, a couple for whom passion and spontaneity have more or less been subsumed by the routines of domesticity. The stultifying dullness of their marriage is given a little vicarious life by the mooching presence of Brett's best friend Alex (co-creator Steve Zissis), a floundering actor, and Michelle's trainwreck of an older sister Tina (Amanda Peet). Togetherness doesn't have the most original setup, and some of its broader moments fall a little flat, but the show shines in its details: all four leads already feel like well lived-in characters, and many tiny instances of both humor and pathos feel organic and genuine. I'll keep watching, if only to see the fabulous Peet—who was one of the only bright spots in the deservedly short-lived Studio 60 on the Sunset Strip—sink her teeth into a character worthy of her talents.

I'm less certain about Man Seeking Woman (FXX, Wed. 10:30/9:30c), the new comedy from creator Simon Rich, but it's definitely one of the more interesting and audacious pilots I've seen in a while, and it made me laugh more than once. The series is executive produced by Lorne Michaels—who hired Rich as one of the youngest staff writers ever on Saturday Night Live—and Man Seeking Woman clearly reflects their shared comedy background. Jay Baruchel (Undeclared, This is the End) stars as Josh, a sad-sack Chicago temp recently dumped by his girlfriend (Maya Erskine), and we watch as Josh navigates single life by moving through a series of high-concept sketch-comedy premises. His sister Liz (Britt Lower), for example, sets him up on a blind-date with a troll—an actual troll. ("She moved here last year so she could start her nonprofit, and live underneath the Wabash Bridge," Liz tells him.) Meanwhile, his best friend (Eric André) thinks it's only unresolved jealousy talking when Josh objects to the fact that ex-girlfriend Maggie's rebound guy is 126-year-old Adolph Hitler (Bill Heder). Man Seeking Woman's first episode is both daring and occasionally funny, but it remains to be seen whether Rich can sustain this level of inspiration, or—more importantly—if he and Baruchel are capable of grounding the absurd comedy in a character we can actually care about. 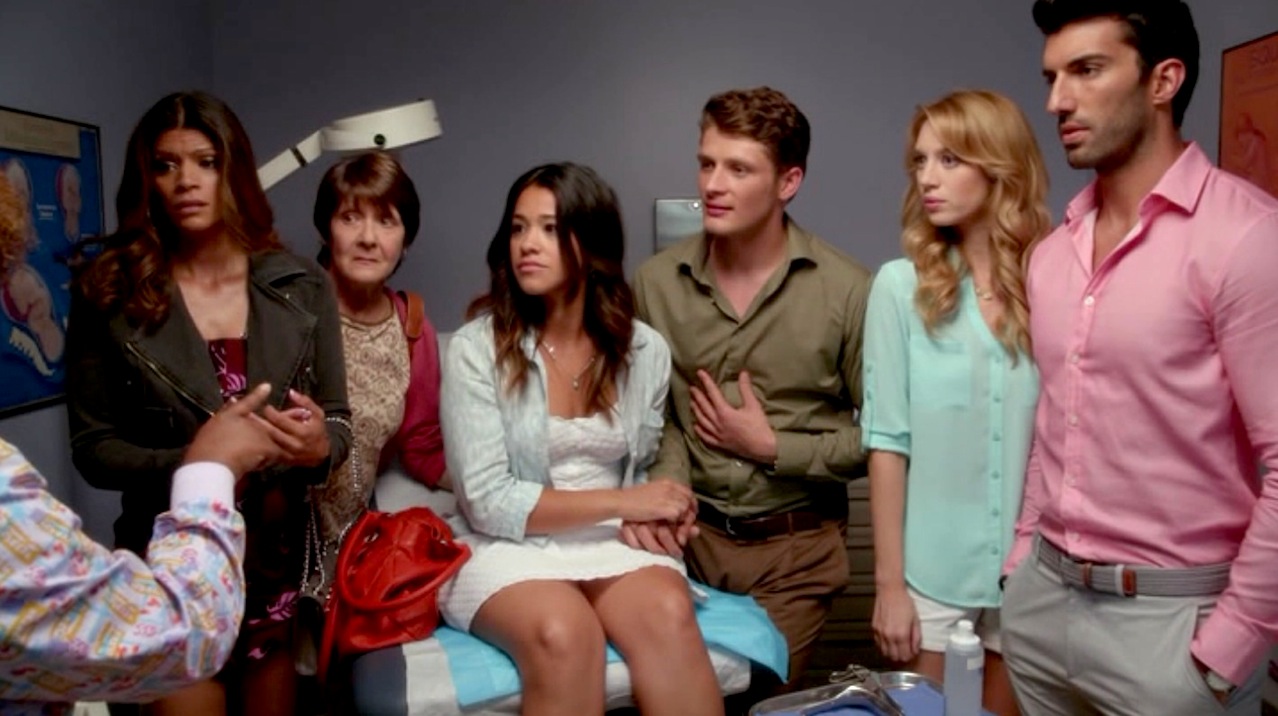 I had been planning to catch up with Jane the Virgin (CW, Mon. 9/8c) anyway, but big wins for both the show and its star Gina Rodriguez at last week's Golden Globes ceremony inspired me—and hopefully a lot of other people—to finally sit down and watch it. A telenovela-inspired dramedy about a plucky young woman (Rodriguez) who is accidentally inseminated in a medical mishap, Jane the Virgin is a high-paced, self-awarely ridiculous soap opera that deftly and fearlessly juggles a lot of colorful characters, and about a dozen increasingly absurd sub-plots, while always maintaining a rock-solid foundation of humor and heart. Though Jane the Virgin is so warmly, endearingly addictive that I blasted through all nine available episodes this week, this is the rare instance of a modern-day show that is probably not improved by binge-watching. Moving directly from one episode to another, the dazzling plot twists piled up on top of each other so fast and furiously that they lost a little of their impact for me, and—despite the help of the omnipresent, sardonically helpful narrator—it became harder and harder to keep track of the story. (At one point I accidentally watched two episodes out of order, and I didn't even notice.) But I'm glad I caught up in time for the return of new episodes on January 19, and I'm looking forward to enjoying this weekly oasis on the barren wasteland that is the Monday-night television line-up. 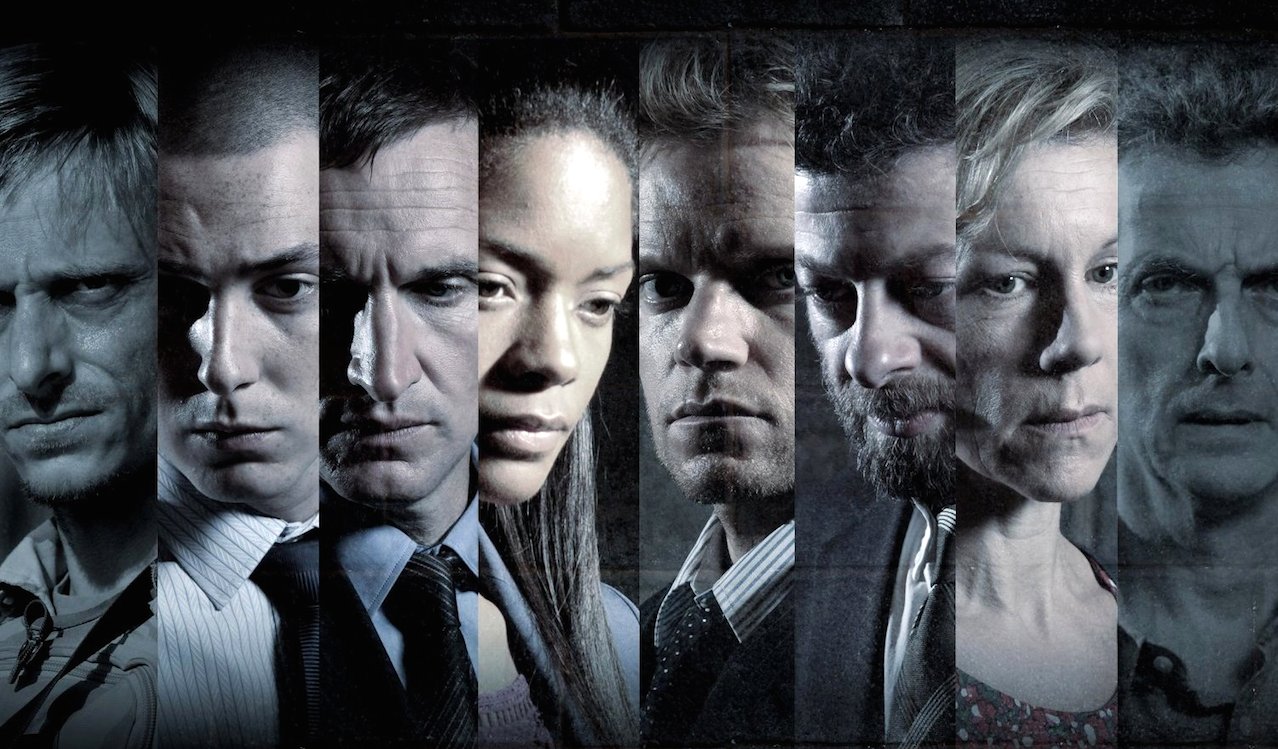 The other show I've been streaming this week is Accused, a 2010-2011 BBC series from creator Jimmy McGovern. McGovern's Cracker was one of my all-time favorite series, a police procedural that was every bit as interested in exploring the psychology of its criminals as it was in following the detective work. Now McGovern pursues this clear interest more directly in Accused, an anthology series where the mystery isn't who done it, but what they did, and why. Each hour-long episode of Accused begins with a person under arrest for an undisclosed crime, and then flashes back to show us the circumstances that led to whatever it is they are accused of having done. Like most of McGovern's work, Accused is a study of ordinary people under pressure, and what it takes to push a good person to commit a terrible act. Once in a while a story takes a turn that's hard to swallow, but McGovern's writing—gritty and insightful—provides a showplace for some of the best character actors in Great Britain to do some stellar work.

(As a public-service side-note, I'm watching Accused on www.acorn.tv, a streaming service that has a cornucopia of British shows, many of which—like Accused—don't seem to be available anywhere else. They've got a 30-day free trial, which is what I'm using at the moment, though I doubt I'll be able to resist springing for the subscription when my trial period is up.) 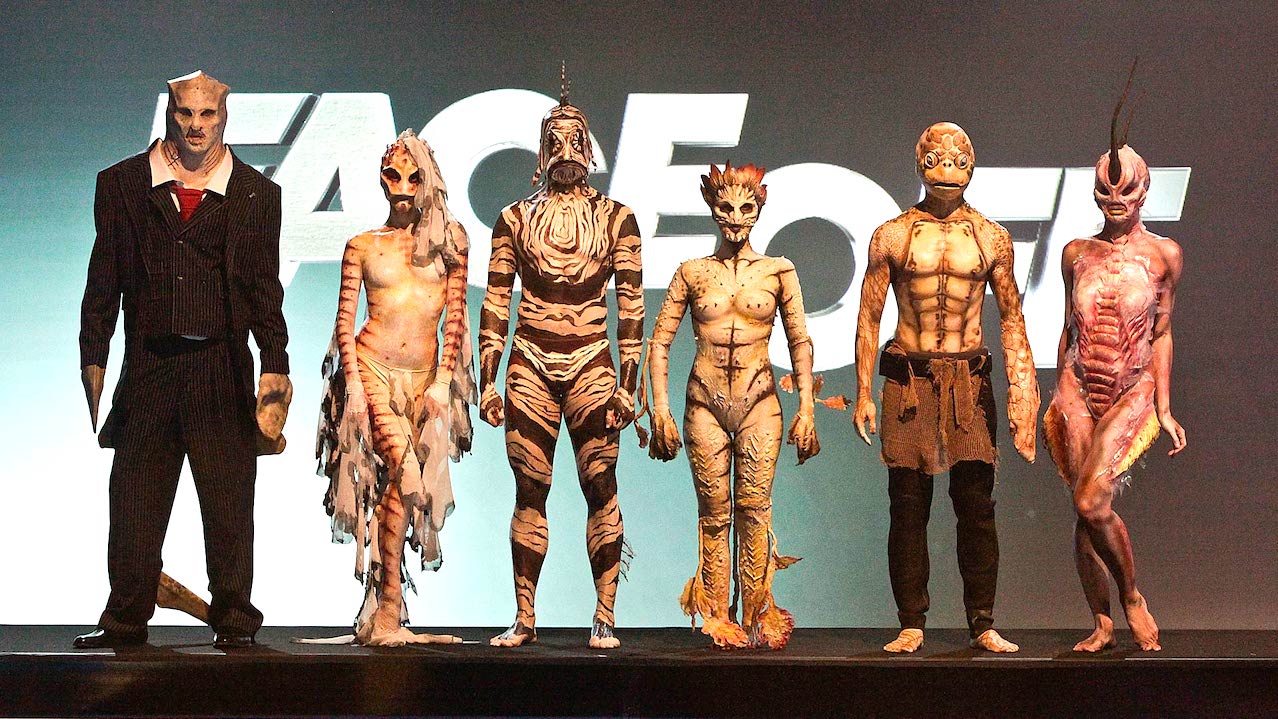 Nothing else returned this week that I care about—Jesus, is Glee really still a thing?—so I can use this space to stump for the under-appreciated Face Off (SyFy, Tues 9/8c), which has probably become my favorite reality competition show. Yes, the basic formula—and workroom drama—is overly familiar from shows like Project Runway and Top Chef. Here, however, instead of making dresses or soufflés, the contestants are making aliens and monsters and evil killer clowns. You tell me, which is more fun? I mean, fashion designers are cool, and being a world-class chef would nice, but—as essential life-skills go—I'd much rather be able to turn an ordinary looking human being into a hellish ice demon or a bio-luminescent crab monster. Who wouldn't?

I gushed about Agent Carter last week, so I don't need to do so again, except to say I'm still loving it. Hayley Atwell kicks all the ass, James D'Arcy is a comic delight as her side-kick Jarvis, and both somehow manage to be real, complicated human beings in the process. The show is having a lot of fun playing with the superhero tropes of its comic book universe, without needing the costumes and super-powers. (Superman had to dress down as Clark Kent to hide his abilities, but Peggy Carter's gender is her secret-identity: constantly overlooked and underestimated by the men she works with, she's a super-hero hiding in plain sight.) It's also doing a fantastic job of allowing the strong woman at its center to actually be a woman: too many "strong women" in genre fictions are written as basically men in skirts, but Agent Carter never falls into that trap. I'm finding myself less interested in the actual plots of each episode, but I think that's because everything else about the show—the character work, the production design, the overall sense of fun—is just so good.

I also wrote last week about the pilot of Empire, which I found to be one of the worst and most ridiculous things I'd seen in years. However, based on this week's second episode, I'm realizing I may have underestimated Empire: it may, in fact, be one of the worst things ever produced by human beings. The scene where a woman puts on a CumBib™ to give her man a blowjob will almost certainly pass into the TV Hall of Shame on the first ballot: it was that hilariously awful.  So, if you're into that sort of thing, by all means, tune in. Me, I decided about halfway through this season of American Horror Story that my life is too short, and my time is too precious, to hate-watch things—even if their awfulness occasionally makes me laugh.

Finally, I want to end this week with a few timely recommendations. You may have heard that Netflix has been negotiating with the BBC over the bulk of its catalog, and there was a possibility that the majority of the British shows could disappear from the streaming service on Feb. 1. It now seems they've resolved their dispute over the most popular shows—like Doctor Who, Sherlock, and Call the Midwife—and those shows will remain for the foreseeable future. (I'm assuming The Fall—which was one of my favorite series of 2014—will also stay, so I mention it here just to let you know they've just added Season Two.) Older shows like Fawlty Towers and Blackadder—both of which you should definitely watch, if you haven't—do appear to be leaving after Feb. 1, so binge 'em now. 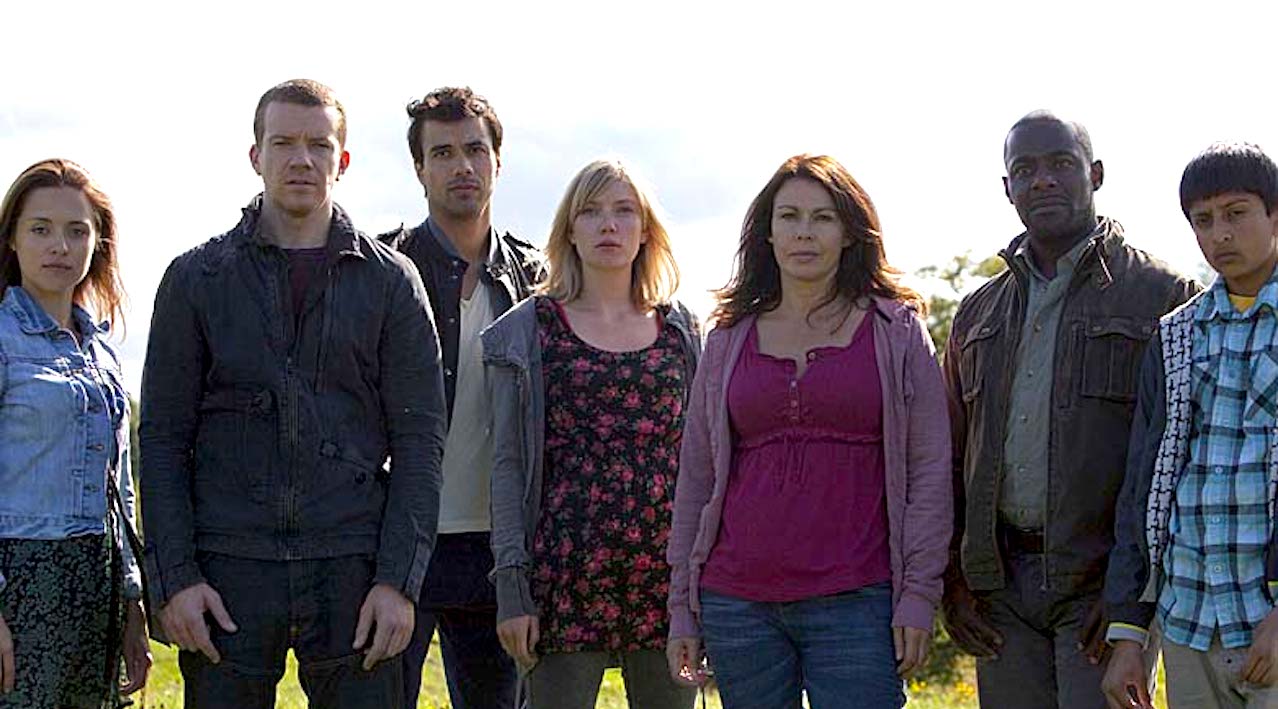 It doesn't look like a full list of expiring properties is available yet, but the show I really want to push is little known, and therefore almost certainly on the list to be dropped: the 2008–2010 series Survivors. A remake of a 1970s series about a plague that wipes out 99 percent of the human race, Survivors—which lasted two seasons—is really, really good: it's like The Walking Dead if The Walking Dead didn't have zombies, and did have believable, engaging, well-developed characters. Seriously, go watch it now if you haven't seen it, and then you—like the rest of us who've seen it—can lament that they never made a third season.

Hmmm…it looks like—apart from Jane the Virgin—there's bugger-all new or returning next week that I want to watch. Justified begins its final season on Jan. 20, but I left off my binge-watch of that show somewhere around Season Three and haven't gotten back to it yet. (It's on the list.) I'll definitely check out Colbert Report replacement The Nightly Show with Larry Wilmore (premiering Jan 19), and I may check out the first episode of Backstrom (Jan 22), the new comedy-drama cop show starring Rainn Wilson. (It looks absolutely insufferable, but maybe that's on purpose.)

Hey: what are you watching?