Though I'm as likely as anyone to state my opinions as if they were quantifiable facts, there is of course no such thing as a truly objective film review. All film critics—whether self-appointed internet hacks like myself, or duly anointed professionals—are really just film-watchers who are willing to sit down and share their subjective film-watching experience with other people. This is not to say that all critics are created equal—as in all things, intellect, education, experience, diligence, and innate talent count for a lot—but it's always a personal process, not a universal science.

The best critics, I think, know this, and never pretend otherwise. "If I approached some guy in a restaurant and told him what he would love, I might get a breadbasket in the face," wrote the late, great Roger Ebert, in "Roger's Little Rule Book" for critics. "No, we must tell the readers what we ourselves love or hate." All critics can do, I believe, is hope that—over time—we establish enough trust and rapport with our readers that they come to find value in our highly subjective descriptions of what we love, and what we hate, and why.

Part of establishing that trust, however, has to include being honest about our biases, preconceptions, and personal preferences. I firmly believe that every film should be judged on its own terms, but it's silly to try to pretend that that's always possible. Sometimes, the statement "I didn't enjoy that movie" isn't really an assessment of the film, but a confession that I don't enjoy that kind of movie.

I'm thinking—and rambling—about all of this today because 2013 has been a difficult year for me as a lay film critic, in ways that may ultimately say more about me than about the films I've seen. This is the time of year when a lot of critics are revealing their top-10 lists for the year, and I find that certain movies keep appearing that I only mildly enjoyed (American Hustle, Only God Forgives, The Bling Ring) or actively despised (Spring Breakers, Frances Ha).

And what I've realized is that—though they have little else in common—I can make one generalization about all of these films: I didn't like anyone in them. The protagonists of these movies all struck me as such deeply dislikable people that—no matter the other artistic or technical merits of the films that featured them—I could find no emotional foothold with which I might truly enter their stories. I somehow just can't truly enjoy a movie when I'm hoping all the characters end up on fire.

It is, I recognize, a limitation for even a lay film critic, and so I'm taking this opportunity to confess my bias now:

"Hi, I'm Michael, I'm the Unaffiliated Critic, and I don't like movies about irredeemably unlikable people."

So how, then, am I to review The Wolf of Wall Street, the new film from Martin Scorsese? For certainly, it is a film of remarkable technical prowess, but there is nothing to like about any of the main characters in this picture. Based on the memoir by stock market fraudster Jordan Belfort (played here by Leonardo DiCaprio), Wolf is a three-hour carnival ride of amorality, a virtual sideshow of depravity and conscienceless capitalist excess.

Wolf begins with Belfort near the height of his ill-gained success—we see him entertaining his equally soulless legions of stockbroker acolytes with a Caligula-esque orgy of cocaine, whores, and dwarf-tossing—and then goes back to his beginnings as a naive young Wall Street aspirant. On his first day working for the banking firm L. F. Rothschild, Belfort falls under the tutelage of manic trader Mark Hanna (Matthew McConaughey, in a colorful cameo), who assures him that the keys to success in business are drugs, sexual indulgence, and a willingness to screw your clients out of all of their money. Belfort takes these lessons to heart, and—following the collapse of Rothschild in the 1987 crash—is soon heading his own empire built on these questionable principles.

Over the course of 180 minutes, we follow Belfort's rise and eventual fall, in the company of a core group of his loyal creations, led by comically repugnant right-hand man Donnie Azoff (Jonah Hill). Incredible quantities of drugs are consumed. Countless beautiful women are objectified and abused. Millions upon millions of dollars are swindled and wasted—largely on drugs and women. How seriously we are to take it all is a question with which each viewer must grapple: the film is diligent in sticking closely to Belfort's exaggerated point-of-view—his own self-aggrandizing memory of events—and, though much of it is based on verifiable fact, Scorsese makes it clear early on that Belfort is not necessarily a reliable narrator. This is like an amoral teen-age boy's perverted, masturbatory fantasy of the American Success Story, a nightmare vision of the American Dream divorced from ethics, empathy, and conscience.

And Scorsese—working from a screenplay by Boardwalk Empire creator Terence Winter—bravely does not provide the film with a conscience. Though there are a few minor characters who offer moments of righteous indignation—notably Kyle Chandler's squeaky clean FBI agent, who pursues Belfort like a humble Inspector Javert—The Wolf of Wall Street plays out like a morality play in which the moral is never quite stated. Scorsese simply puts Belfort's version of events on-screen, and leaves it to the viewer to pass judgement and extrapolate whatever lessons there might be to learn.

This moral reticence and restraint is not limited to the style of the film, but also to its content and performances. We see almost nothing of the victims of Belfort's crimes, and neither he nor we are forced to confront the impact and collateral damage he leaves in his coke-fueled, greed-driven wake. This is true about the victims of both his financial schemes and his sexual predation: the first are almost completely invisible; the second, more problematically, are a series of sexually objectified—often nude—women who are given little voice, agency, or even recognition as human beings. (The only exceptions are Belfort's two wives, played by Cristin Milioti and Margot Robbie, but even their more personal complaints are given short shrift: a late scene of marital rape and physical abuse, for example, is horrifying in its presentation but receives no comment—let alone comeuppance—in the film.)

DiCaprio's performance, as well, is in tune with the overall approach to this material: it is an entirely external performance, colorful but soulless. There is not the slightest hint that Belfort has an interior life, let alone any internal conflict. As such, I have difficulty even saying whether it's a good performance or a bad one: it seems totally appropriate to this shallow, terrifyingly thoughtless man, but it also leaves us no sympathetic entry into his character. Unlike in other Scorsese films in which the basic rise-and-fall arc is otherwise comparable to this one—GoodFellas or Casino, for example—there is simply nothing recognizably human here with which we can connect. 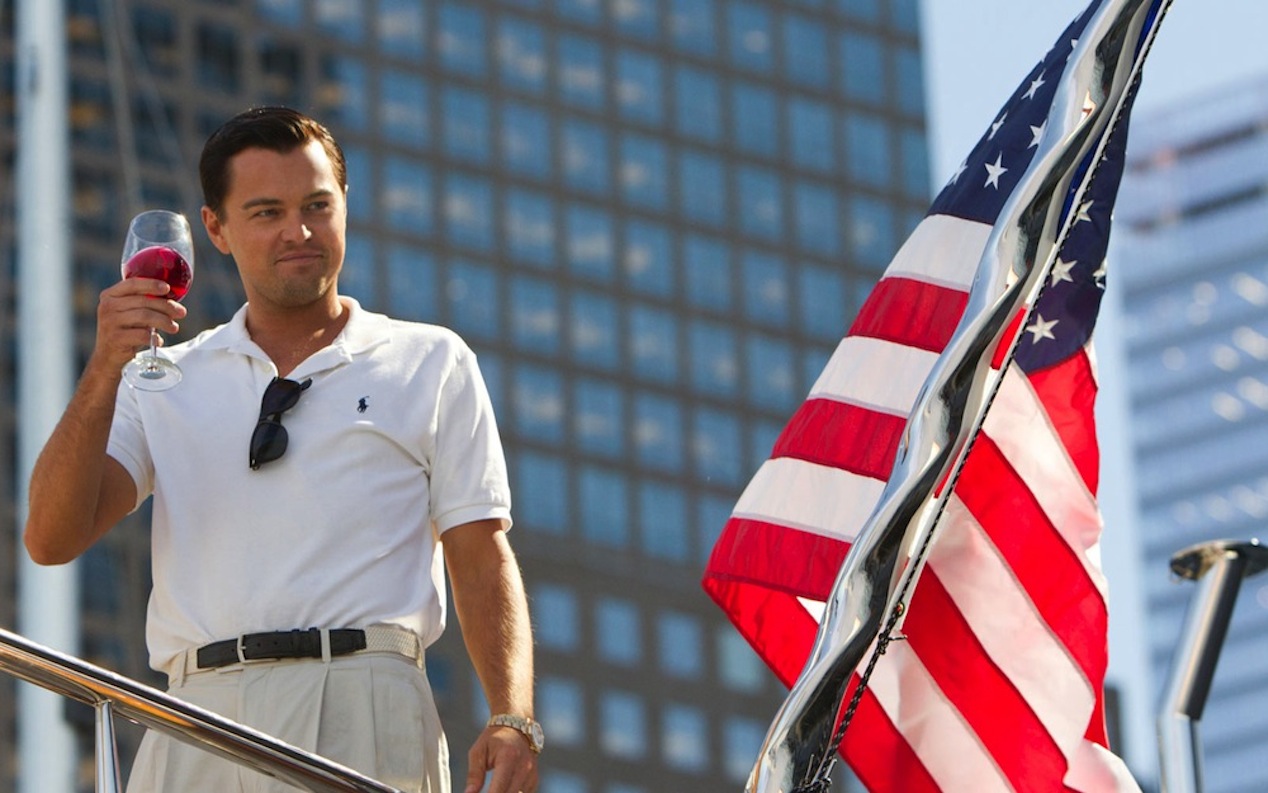 The result is a film that has been widely criticized for glorifying the very abuses and excesses that it depicts, which is both a fair view and a problematic one. Ultimately, it is a question of intent versus effect. No one, I believe, could seriously argue that Scorsese, Winter, or even DiCaprio admires Jordan Belfort—who remains amoral, misogynistic, and unrepentant to the end—or that their intent in displaying his grotesqueries on-screen could have been anything but to shine a satiric spotlight on the worst possible elements of human nature and American greed. I would be the first to admit that American audiences can sometimes have a serious problem with irony, and we have to admire Scorsese's willingness to present this story without the comforting, spoon-fed protection of a clear moral viewpoint.

At the same time, however, The Wolf of Wall Street is a fiendishly entertaining film, and perhaps dangerously so. Should machismo, misogyny, and malfeasance be this entertaining? Funny, exuberant, and dazzling in its technical prowess, Wolf risks courting our envy of Belfort's lifestyle even as we are repelled by his life choices. This, too, may be part of Scorsese's point—to make the film so much fun that we are complicit in its debauchery—but it is all too easy to imagine The Wolf of Wall Street being loved for all the wrong reasons. Watching Wolf, I kept wondering if it would be taken as a template for wannabe Wall Street tycoons, in much the same way that Brian DePalma's Scarface became a lifestyle guide for wannabe gangsters.

(It probably didn't help that I saw Wolf within a day of seeing Joshua Oppenheimer's extraordinary documentary The Act of Killing, in which Indonesian killers brag just as gleefully about their crimes as Belfort does about his. I don't want to get off on a tangent, but one of the striking things about Killing is the extent to which we realize that these genocidal murderers have largely forged their identities—they proudly call themselves "gangsters"—by idolizing anti-heroes in Hollywood movies. I don't remember if they mention Scorsese by name, but I'd bet money they'd list films like GoodFellas among their influences.)

None of this is necessarily Scorsese's responsibility, of course, and no artist should be held responsible for how his art is misunderstood. (There are no doubt people who watch Kubrick's A Clockwork Orange and think Alex and his droogs really know how to live, but I don't think that was the point.) And The Wolf of Wall Street is unquestionably an impressive piece of film-making: even if I thought the movie as evil as its characters—and I don't—there are simply too many stunning shots and sequences to dismiss it out of hand. But the marriage of technical bravura and moral vacuity leaves one—or left this one, anyway—with a bad taste in his mouth, and an uneasy feeling about the filmmaker's choices. Ultimately, while The Wolf of Wall Street is certainly illustrative of a certain mindset—the mindset of those who recklessly brought the American economy to its knees—I'm not sure it's particularly insightful, and I'm not sure it's particularly helpful.

On the other hand, watching films is a subjective matter, so maybe it's just me: perhaps, as I said when I began, I just don't enjoy this type of film. (I am, after all, probably the only critic in America who will claim 2011's Hugo as my favorite Martin Scorsese film—and there's a reason for that.) Given two hours of my life—or, in this case, three—I do not happily choose to spend them with people like this, and I do not find it easy to enjoy any story in which the only emotion I can feel is revulsion.