"It would be so much simpler if I was just one thing, wouldn't it?"

That question—asked towards the end of "A Town Called Mercy"—underlines writer Toby Whithouse's deliberate subversion of the Western genre. Westerns—and particularly the straight-up, old-fashioned Hollywood Westerns that this episode intentionally evokes—are all about good guys and the bad guys, heroes and villains, White Hats and Black Hats. What Whithouse presents here is a situation that appears to be that simple—the kindly town doctor menaced by a monstrous, black-hatted gunslinger—but then the situation and the characters all grow increasingly more complicated as the story unfolds. No one is "just one thing"—least of all our hero—and nothing is simple.

I was hard on last week's episode for being a thematically empty sci-fi romp, but "A Town Called Mercy" is an excellent reminder that it is possible to use the tropes of genre adventure to explore fairly complex ethical dilemmas. In fact, that's one of the things that Doctor Who does best.

The Doctor (Matt Smith), Amy (Karen Gillan), and Rory (Arthur Darvill) arrive in the tiny town of Mercy, somewhere in the American West, in the year 1870. Ignoring the Keep Out signs, they discover an ominously empty town square, wired with electricity about 10 years too early, where many of the town's 81 residents stare out at the newcomers in fear. "Anachronistic electricity, Keep-Out signs, aggressive stares," the Doctor observes, gleefully. "Has someone been peeking at my Christmas list?" 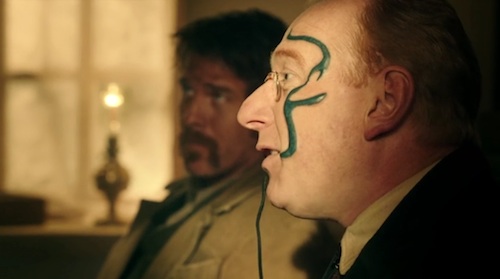 The source of the electricity turns out also to be the source of the trouble: Kahler Jex (Adrian Scarborough), a seemingly kindly alien doctor who has crash-landed nearby and been warmly embraced by the town of Mercy. He's rigged the town with electricity and heating, and he's saved the townspeople from a cholera epidemic, so they don't care where he's come from or what he did before. "America's the land of second chances," says town marshal Isaac (Ben Browder). "We call this town 'Mercy' for a reason."

However, a menacing cyborg dubbed The Gunslinger (Andrew Brooke) wants Jex dead, and has put the town under embargo in order to force the citizens to turn him over. It's the perfect set-up for both a Western and for a Doctor Who story: a defenseless society under siege by a black-hatted marauder, with the Doctor and his companions as the wandering heroes coming in to save the day. 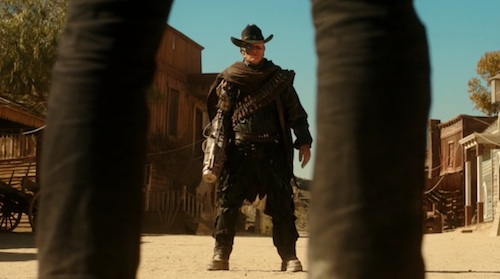 But nothing is that simple. The Gunslinger turns out to be, himself, fairly merciful—the only reason he hasn't killed Jex already is because he doesn't want to injure civilians—and Kahler Jex turns out to be the architect of some horrendous wartime experiments that killed countless subjects to produce a class of super warriors, of which The Gunslinger is one. Is Jex a hero, for creating the soldiers that won the war? Or is he a monster, for conducting unspeakable experiments on unsuspecting volunteers? And does it matter who he was, or what he did, if he's now dedicated his life to doing good? "He's a war criminal," Rory says. "No," Isaac says. "He's the guy that saved the town from cholera, the guy who gave us heat and lights."

And the thing is, he's both: the episode is about mercy, as its title implies, but it's also about the related concepts of forgiveness, and redemption. Jex is haunted by his crimes: as he explains to the Doctor, his religion says that, in the afterlife, we all must climb a mountain carrying the souls of everyone we've wronged, and he knows his burden is great. He fears this judgement, and he also wants—before he has to face it—to balance the scales by helping as many people as he can with his remaining years. He is, as he tells the Doctor, not just one thing. 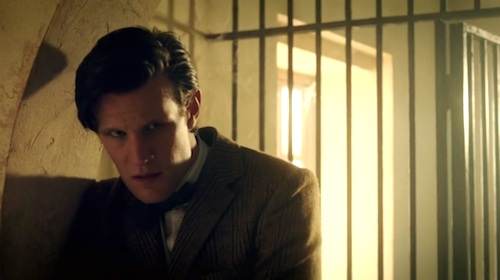 Jex can obviously be seen as a stand-in for Davros, the creator of the Daleks, who began his existence as a sort of alien Joseph Mengele. However, this episode finds its real resonance in the parallels between Jex and The Doctor himself. "Looking at you, Doctor, is like looking in a mirror," Jex says. Unspoken here, but implied throughout, is the fact that the Doctor—as we saw in Season Five's "The Pandorica Opens"—can be considered the greatest war criminal in history. In the Time War alone, he annihilated billions, and not just the enemy: he was also directly responsible for the destruction of his own race. The Doctor may have dedicated his life, before the Time War and after, to helping people—just as Jex has—but if The Doctor has to climb a mountain carrying the souls of those he's wronged, he knows his burden will be immeasurably heavier than Jex's. "You don't get to decide when and how your burden is paid," he tells Jex, but he is also speaking for himself. ("You want to be forgiven," Amy told him once. "Don't we all?" he replied.)

And even now, the Doctor is not "just one thing": he is not wholly good, and he is capable of terrible acts. His first reaction upon learning of Jex's past is to let The Gunslinger have him. I said in my review of "Asylum of the Daleks" that this season's theme would be the dual nature of the Doctor—is he a warrior or a healer?—and "A Town Called Mercy" develops this theme further by pointing out just how complicated the question is. "Mercy" itself is a complicated question, for the mercy the Doctor has almost always shown his enemies has, from one perspective, just resulted in countless deaths. Way back in 1975's "Genesis of the Daleks," the Doctor could not bring himself to commit temporal genocide by preventing the creation of the Daleks, and so—though that decision may have been morally sound—there's an argument to be made that all the death and destruction the Daleks have caused is on the Doctor's conscience. 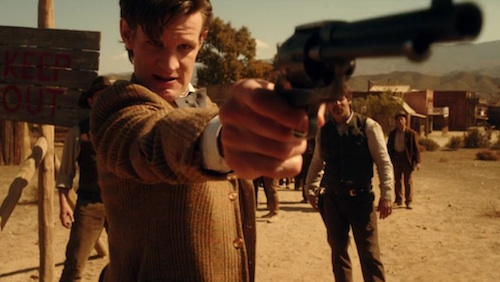 The Doctor has always been the hero who carries a screwdriver instead of a gun, and yet here—just a week after we witnessed his execution of Solomon in "Dinosaurs on a Spaceship"—we find the Doctor doing something that is almost unthinkable: pointing a loaded gun at another person. "Today, I honor the victims first," he says now. "His, the Master's, the Daleks': all the people who died because of my mercy." This is the dark side of the Doctor, the Predator, the Oncoming Storm: this is the wrathful figure who—as we discussed last season—has perverted the very word "doctor" to mean "great warrior."

The parallel theme of this season is turning out to be the role the Doctor's companions play in his life—the humanizing checks and balances they provide—and here it is once again his human companion who must reign in his darker impulses. "This is not how we roll, and you know it," Amy says. "What's happened to you, Doctor? When did killing someone become an option?"

This is what happens, Amy points out, when the Doctor spends too much time travelling alone: it's not good for him. ("Because sometimes I think you need someone to stop you," Donna Noble [Catherine Tate] told him once. And the last time the Doctor spent a lot of time by himself, without a companion, he flirted with becoming the megalomaniac "Time Lord Victorious" in "The Waters of Mars.")  It's the almost irresolvable "Companion Conundrum," which was a major subject of Toby Whithouse's last episode, and which Steven Moffat has been exploring ever since he took over this series: the Doctor needs companions in his life, but his presence in their lives is not always good for them. He has been travelling alone because he has been weaning Amy and Rory off him—that, itself, was an act of mercy—but he himself is becoming more merciless as a result. (Next week's episode, which apparently finds the Doctor living with the Ponds, should develop the Companion Conundrum even further.) 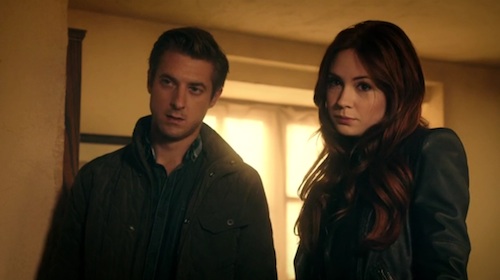 In the meantime, this episode finds an interesting—and troubling—resolution to the questions of forgiveness and redemption. The Doctor, with Amy's help, regains his compassion—at least temporarily—and seeks a solution to the problem that avoids any more immediate bloodshed.  "Violence doesn't end violence," he tells a lynch mob. "It extends it." That's the Doctor we know and love—the one who, in the final showdown with The Gunslinger, quick-draws not his pistol but his sonic screwdriver. But The Doctor's plan is to send Jex running away. (As the Doctor himself has been running for centuries, often with disastrous consequences to those he encounters.) Jex, however, has realized that his problems will just follow him wherever he goes, putting other innocent lives at risk: he chooses instead to sacrifice himself, and end the cycle of violence. "He behaved with honor at the end," The Gunslinger says. "Maybe more than me."

Maybe more than the Doctor, as well. There are no cut-and-dry heroes here, and no villains, and each of us can wear the white hat or the black hat. ("You're both good men," Isaac says of the Doctor and Jex. "You just forget it sometimes.") The war criminal Jex dies to save others from violence, and the demonic Gunslinger becomes the angelic Peacekeeper. Even Amy is a creature, as Jex tells her, of "kindness, sadness, and ferocity."

Doctor Who would be so much simpler if the Doctor was "just one thing," but it's a more interesting show than that, and executive producer Steven Moffat has proven that, perhaps more than any showrunner before him, he is interested in exploring the complexities of the Doctor's character, and he is willing to allow that character to develop and change. As he proves here, the Doctor is able to wear both the black hat and the white: he is a figure of incredible rage and endless compassion, of destruction and healing, of war and peace. Moffat has claimed that this season will have no overall story arc, but it is obvious that the thematic arc of this season will see the Doctor continuing to struggle against his own terrifying capacity for hatred, even as he loses the people he loves the most.