Confession: my girlfriend and I recently sat down to watch the Twilight movies for an ill-planned special edition of our series "The Unenthusiastic Critic" (in which I cajole her into watching films that she really doesn't want to watch). Neither of us had ever seen the Twilight movies—or read the books—so I thought it would be a fun experiment to plunge into this worldwide phenomenon together. Whether we loved them or hated them—and I was fairly certain she, at least, would hate them—it would surely result in an interesting and entertaining post, right?

Wrong. During the first movie we were bored, during the second we were stuporous with depression, and by the third movie we realized we really, really should have given up after the first movie. The films were dull and lifeless, the sexual politics were appalling, the acting was terrible and wooden, and the writing was joyless, cliché-ridden, and featured a never-ending barrage of unforgivable insults to the art of dialogue. We both hated every second of the entire experience, and not in a movies-we-love-to-hate kind of way. Irredeemably awful in a way that only a franchise with a built-in audience would dare to be, those movies didn't inspire conversation, they inspired lethargy and weltschmerz. It was a silent, seven-hour descent into the gray, soul-deadening abyss of film mediocrity: one for which my girlfriend has yet to forgive me, and one from which I was unable to salvage a single paragraph of usable commentary. (Mea culpa, N.)

And so it was with some hesitation that we ventured down to the local multiplex, where something like eight of the twelve screens were showing The Hunger Games.  I knew virtually nothing about the movie except that it was—like Twilight—based on a phenomenally successful series of young-adult novels with a teenage heroine and a legion of rabid fans (young and old alike). I had decided not to read the first book in Suzanne Collins's best-selling trilogy—so as to give the film the best possible opportunity to impress—but I have to confess that my expectations were not high. I worried that this franchise might very well send me into another spiral of despair over what the kids were reading these days.

And that just goes to show what I know: The Hunger Games is terrific. Directed by Gary Ross (Pleasantville and Seabiscuit) from a screenplay by Ross, Collins, and Billy Ray (Shattered Glass), The Hunger Games is what all such franchise blockbusters should aspire to be, but what so few ever are: a real, proper movie, with brains, heart, and soul. Forget those dingy Twilight movies: as a piece of stand-alone entertainment, I'd send this one into combat with the best of the Harry Potter franchise and expect it to emerge from the arena triumphant.

As nearly everyone but I already knew, The Hunger Games is about a dystopian future in which North America has been reformed as Panem, a fascistic nation made up of 12 distinct districts. As a brief propaganda film explains, an unsuccessful rebellion occurred some 75 years earlier; now, this rebellion is memorialized/punished through the annual Hunger Games, in which each district must send two teenagers, a boy and a girl, as "tribute" to an elaborate state-sponsored deathmatch. The participants are chosen every year through a mandatory lottery, and sent to battle each other in a nationally televised contest from which only one may emerge alive.

Katniss Everdeen (Jennifer Lawrence) lives with her widowed mother (Paula Malcomsen) and little sister Prim (Willow Shields) in the poverty-stricken 12th district (a coal-mining community not terribly different from the Ozark home of Lawrence's previous character in Winter's Bone). Katniss is a strong, resourceful young woman, who keeps her starving family fed by sneaking into the woods to hunt game with a bow and arrow. (There she also flirts with a handsome young man named Gale [Liam Hemsworth], whom one suspects will have a larger role to play in the sequels.) When tiny Prim is—in her first year of eligibility—selected as tribute to the Hunger Games, Katniss volunteers to take her sister's place, and is whisked off with her male counterpart Peeta (Josh Hutcherson) to the opulent capital to prepare for battle. 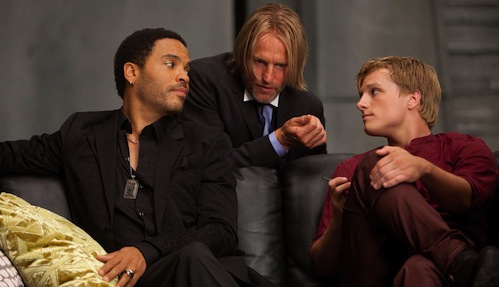 Dystopian science-fiction presents great opportunities for over-the-top satire, but The Hunger Games treats its material seriously while still having a fair amount to say about the cult of fame, reality-TV, and class warfare. Katniss and Peeta are assigned a mentor named Haymitch (Woody Harrelson), a previous winner of the Games who turns out to be a caustic drunk. They assume he will teach them combat and survival techniques, but his lessons are far more cynical, and much more practical: he teaches them to be celebrities, with some help from kindly stylist Cinna (Lenny Kravitz) and vapid chaperone Effie (Elizabeth Banks). They learn to give good interview, to put on a show, and to manipulate the audience through a faux on-screen romance that only one of them knows is a lie.

The title games are the centerpiece of the movie, but Ross takes his time getting us there, being careful to establish the workings of this strange world and, more importantly, to make sure we care about the characters in it. Much of the credit must go to star Jennifer Lawrence, who gives a quiet, nuanced performance as the reluctant warrior. It is perhaps unfair to keep comparing this film to the incomparably inferior Twilight, but the intelligence and emotional complexity Lawrence brings to this role could not be further from the surly blank stare of Kristen Stewart. (The books are narrated by Katniss, and some viewers have bemoaned the film's failure to transfer this inner monologue to the screen. For my money, however, Lawrence implies a fiercely-working mind in every scene, and renders her character far more interesting for the occasionally ambiguous moments when we are unsure whether Katniss is being sincere or just playing the game.)

Without getting too much further into a critique of the Twilight movies, it must also be noted that the two heroines of these mega-franchises could not be further apart either. Unlike Bella, Katniss is a feminist hero I would be proud to have my (hypothetical) teen-age daughter emulate. Strong, kind, and self-reliant, Katniss is a kick-ass hero but not a super-hero, managing to retain her essential humanity, fallibility, and decency while being unafraid to do what she must to get the job done. Tremendous credit must also go to everyone concerned for making Katniss attractive and charismatic without overtly sexualizing her: a very rare and welcome thing in these sorts of movies. (There is a love triangle—of sorts—at work in this story, but it is never the most important thing, and it certainly doesn't define the protagonist.) In the film's thrilling second half, which focuses on the Games themselves, Katniss proves herself tough, clever, and fearless, while still maintaining her essential goodness and identity. It's hard to think of a better sci-fi heroine in cinema.

The Hunger Games is rated PG-13, and must walk a fine line in relation to the darkness and violence of its material, but Ross treads that line nimbly: he shoots the action scenes in a hand-held, fast-cut style that maintains the considerable brutality without lingering overlong on the gore. The camera work in a few of these sequences may make some viewers queasy, and the editing sacrifices a little narrative coherency here and there, but these are minor quibbles: overall, the film's action-heavy second half is brilliantly paced, genuinely breathless, and generates real excitement from being surprisingly realistic and earthy. (In terms of emotional involvement, all the computer-generated comic-book spectacle of John Carter is not worth two minutes of Katniss scrambling up a tree with an injured leg while being pursued by taunting teenagers.)

As I said when I began, I haven't read Suzanne Collins's trilogy (yet), and I have no doubt that those who have will find fault with this adaptation of The Hunger Games. Certainly, there are aspects of Panem history and society that don't make a great deal of sense from this first film, and there are characters (like Rue [Amandla Stenberg], an elfin combatant Katniss befriends) who register sufficiently in the film but are no doubt given better treatment in the books. But as a total neophyte to this world, The Hunger Games succeeded completely in drawing me into this dystopian society and investing me in its plucky heroine. I don't remember the last time I was so pleasantly surprised by a much-hyped blockbuster, nor the last time I was so geekily impatient for a franchise sequel.

That sequel, Catching Fire, is currently slated for Thanksgiving 2013. Until it arrives, I'll have to satisfy myself with reading the first novel in the series, and—no doubt—by seeing The Hunger Games a couple of more times.