DOCTOR WHO 2011 SPECIAL: "THE DOCTOR, THE WIDOW, AND THE WARDROBE"

I have been a staunch supporter of executive producer Steven Moffat's fairy-tale approach to Doctor Who; I've also said, again and again, that the show's greatest strength is that it can tell any kind of story for any kind of mood. So I suppose it would be rather churlish to complain when Moffat delivers a Christmas Night episode that errs more than slightly on the sugary side, and not only oozes fairy-tale elements but functions on fairy-tale logic.

I have no doubt that the prickly, the pedantic, and the Old School Whoovians will hold "The Doctor, the Widow and the Wardrobe" up as a perfect example of everything that is wrong with New Who—as egregious as the silliest excesses of the Tennant/Davies era—and there's a part of me that agrees with them. (If you could pop in your TARDIS and show this special to William Hartnell, I suspect the First Doctor would have a bit of trouble recognizing both the show and the character.)

So we can argue about whether Moffat stretches this flexible format too far, and sometimes uses Doctor Who as an anthology series. There are times when the Doctor functions something like Mr. Roarke on Fantasy Island, a familiar host who maintains an illusion of continuity and provides a bridge to self-contained stories. Certainly "The Doctor, the Widow and the Wardrobe" feels like a Christmas story that just happens to include the Doctor, rather than an episode of Doctor Who that just happens to take place at Christmas. (You could, in fact, remove the Doctor from this story altogether, and change very little else: it would be a Narnia-inspired TV movie about children who find a magic door to an enchanted forest, and about the mother who saves them.)

Whether you're okay with that—and whether you enjoyed "The Doctor, the Widow and the Wardrobe"—probably says a lot about what kind of Doctor Who fan you are. As an episode of a long-running science-fiction series about a 1,000-year-old alien, it's a bit rough: I buried my face in my hands throughout the opening sequence, as the Doctor fell from outer space to Earth—unprotected for at least part of the journey—and crashed in 1940's London without a scratch. (Yes, fine, there's a line about how the suit is repairing his body, and I've been doing this long enough to infer, without being told, that the suit also has some kind of anti-gravity device that slowed his descent. I can excuse it all, but it's still off-puttingly silly.) And I cringed throughout the tour of the house, which—though Matt Smith is a comic delight, as always—felt more like Mr. Magorium's Wonder Emporium than Doctor Who. The emotional storyline of Madge (Clair Skinner) trying to figure out how to tell the children about their father never really achieved any poignancy for me, and the sci-fi plot—which involved a thin ecological message and the mass evacuation of tree-souls—never seemed to quite get going dramatically.

On the other hand, the episode was a visual delight, and as an hour of holiday television was fun and imaginative and wonderfully Christmassy. A present that opens up into another world? A winter wonderland in which the trees generate both their own ornaments (which—very cleverly—turn out to be seeds) and their own stars? Even without the obvious Narnia references, I'm a sucker for the fairy tale imagery of cute kids in pajamas and Coke-bottle glasses running around a forest. (It helps that the children in question—Maurice Cole as Cyril and Holly Earl as Lily—were both decidedly non-annoying.) It was The Lion, the Witch, and the Wardrobe, with a touch of A Wrinkle in Time, and just a hint of Aliens at the end. It was charming, and funny, and a fine way for families to spend an hour in front of the television on Christmas Night. It just wasn't very Doctor Who.

But that's okay with me. The Christmas special is always a bit of a wild card, and I actually like that Moffat makes the holiday elements his top priority. (Russell T Davies tended to just throw a star-shaped spaceship or some homicidal Santas into a typical story and call it a Christmas Special.) Last year's special was, in my opinion, exquisite: it had plenty of silly stuff about chimneys and flying sharks, but at its heart it was a sad, emotionally mature story about bitterness, regret, and mortality. It was, in short, more for the grown ups, and this one was more for the kids, a celebration of family, mothers, and how wishes sometimes come true. I can live with that at Christmas. 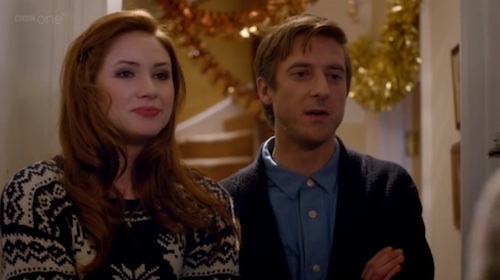 And Moffat didn't forget the grown-ups completely: the final few minutes made it about the Doctor once again, and brought this special back into thematic continuity with last season, and with the Eleventh Doctor's overall character arc.  After the Doctor spent the episode saying that he "doesn't have a home," and telling Madge that he can't feel the way she does, Madge reminds him—as Craig (James Corden) did earlier this season—that all his protective, "they're better off without me" stuff is just so much nonsense. Christmas is about family, and this Doctor has one.

It may be heretical, but I continue to adore the way Steven Moffat and Matt Smith allow the Doctor to change and grow emotionally. For all of David Tennant's repressed romantic longing and choked outbursts, this Doctor is—in this respect—the most feeling version we've ever seen, the first Doctor who has really been allowed to openly love and be loved in return. The Eleventh Doctor has put the Ninth Doctor's survivor's guilt and the Tenth Doctor's "lonely angel" crap behind him: he has people he loves, and he has a home, where a place for him is always set. It's little more than a cameo from Karen Gillan and Arthur Darvill, but it was the perfect way to end the episode: until Amy and Rory showed up it really didn't feel like Doctor Who—or Christmas–at all. (Earlier in the episode, the Doctor tells Lily that crying when you're happy is "so human," but it turns out that Time Lords do it too. At least, they do it at Christmas.)

Whatever else I felt about this episode, the Doctor's homecoming—and the surprised sense of belonging that passes across Matt Smith's face—was more than enough to sustain me through the long nine months until Doctor Who returns. 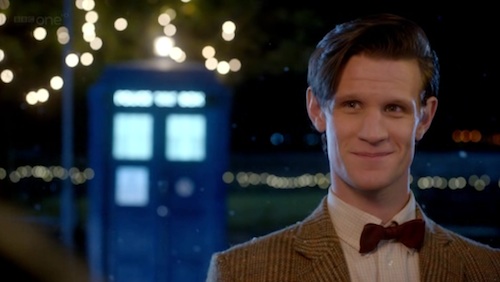