For the record—and lest you think I'm losing my fondness for this ridiculous show—it should be noted that even a slightly less insane episode of American Horror Story still includes: two gay ghosts; two ginger ghosts; two appearances by a homicidal Rubberman; one ex-mistress returned from the grave; one dead woman euthanizing her elderly mama; one woman with Down's syndrome getting struck by a car while wearing a "pretty-girl" costume; one burned man pounding on the door; one doctor sewing his dismembered baby back together with animal parts; and a sonogram so frightening it makes medical professionals faint.

What can I say? It was a slow week at the old Murder House.

Our flashback this week only flashes back a few months, to the previous owners of the house. Chad (Zachery Quinto) and his partner Patrick (Teddy Sears) are trying to brighten up the Murder Manse with some Marie-Antoinette-O'Lanterns so that they can sell the place and get the hell out. (I think it's safe to say that no one at this address has ever had a good home-owning experience, let alone a good relationship.) We had been told earlier that Chad and Patrick died in a "murder-suicide," but it turns out to be a good old fashioned "murder-murder," as the ubiquitous Rubberman drowns Chad in the bobbing station, and then presumably dispenses with Patrick, who goes out dressed as a cowboy. (Later in the episode, Chad will be snotty about the tacky costumes the Harmons are wearing. I don't think this couple is in any position to judge.) 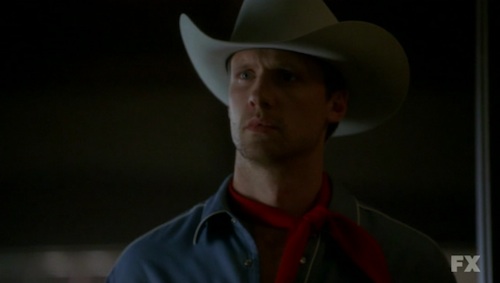 Fortunately, we don't have to go far to find the parallels between Chad/Patrick and Ben/Vivien: throughout this episode Vivien and Ben—hating the house and each other—are trying to spruce up the place for Halloween to bring in the "lookie-loos," so they can sell and get the hell out. Their inept realtor Marcy suggests the house needs a "fluffer"—double entendre most assuredly intended, for those of you still working the house/body metaphor—and when Chad and Patrick turn up, Vivien assumes they're the fluffers. (As a plot device, this little misunderstanding is a sit-com classic.) Quinto's campy performance is very funny—though the actors's recent coming-out was fortunate, since a straight actor would get crucified for this character—but Vivien and Ben don't seem to notice at first that Chad is bitchy in the extreme. (Seeing Ben in his vampire costume, he sing-songs, "Never fear: Count Chocula's here, to really add some class.") 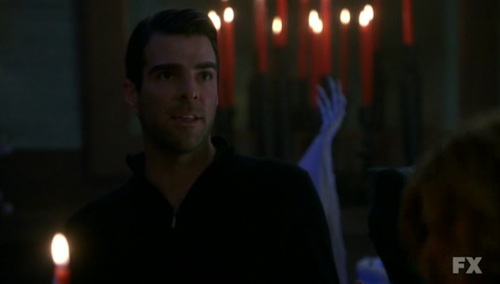 Chad and Patrick's increasingly insane behavior looks like it's leading to another home invasion storyline, but it turns out to be little more (so far) than a catalyst for Ben and Vivien to have incredibly obvious revelations about their marriage. The parallels between the couples run deeper than a lousy real estate market, of course. Ben and Patrick have both cheated, while Vivien and Chad have both been cheated upon. While the cheaters are gathering in the upstairs bathroom to agree on how much—and how often—they like to have their dicks sucked, the cheatees share tactics for discovering deception. This leads Vivien to check Ben's cell phone bill, where she discovers many calls from dear, departed Haydn.

("Haydn is over," Ben assures her—which is honest as far as it goes, but not the whole truth. "Haydn is over there, under the gazebo," would have been more accurate, but hey: baby steps.)

Chad completely flips out over the inappropriateness of the bobbing station, and Ben and Vivien throw the fluffers out. Vivien then takes this moment—naturally—to tell Ben she can't live with his lies anymore. And then her baby begins kicking—a highly advanced maneuver for an 8-week old fetus—and they have to rush to the hospital. The doctor takes one look at the sonogram and says the baby looks awfully big, and then takes another look and faints dead away. (I'm not an expectant parent myself, but I'm guessing that's about the last reaction you hope for in that situation.) 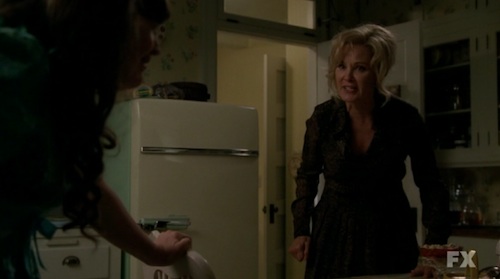 I'm going to skip over a few subplots here, including: Moira (Frances Conroy) going to pull the plug on her dying mother; the budding, creepy romance between Violet and Tate (Evan Peters); Larry (Denis O'Hare) and his quest for money; and the vile origin story of Infantata. Sorry, they're all deservedly weird, and I'm sure we'll return to them next week, but at the moment I really want to talk about Constance (Jessica Lange) and Addy (Constance Brewer).

In their other (and almost equally preposterous) show Glee, Ryan Murphy and Brad Falchuk have, to their credit, used characters with Down's syndrome, and they've taken the approach (personified in the Sue Sylvester character) of not only refusing to treat them sentimentally but refusing to spare them from the same silly plot necessities that every other character faces. Sue's sister Jean (Robin Trocki), for example, was featured on-screen in one very touching episode, and then later killed off-screen to generate a less touching, more absurd story (and several awkward musical numbers). Becky (Lauren Potter), was also originally introduced to broaden Sue's character, but since then has been played almost entirely for comedy, basically becoming Sue's evil Mini-Me.

Certainly, American Horror Story has demonstrated that Addy is free game for the same treatment: she's not going to be saintly—she may not even be likable—and she's going to go through the same plot-wringer as everyone else. Fair enough. But when I think of American Horror Story in relation to Glee, it's not Jean or Becky I think of, but Kurt Hummel (Chris Colfer) and his father Burt (Mike O'Malley). To me, the relationship between the Hummels has always been the best thing on Glee, touching some authentically powerful emotions about unconditional love and a father's struggle to understand his son's homosexuality. The problem is, the situation is so real that it is out of place on the cotton-candy confection that is the rest of Glee.  The show can't really handle the weight of that relationship, because nothing else on Glee comes close to touching its emotion or importance. The Hummel Family's honest moments are simply overwhelmed by a show that continually chews up and spits out any real character development in the process of gnashing its way through story after silly story.

My point—and you'll no doubt be relieved that I have one—is that this is pretty much how I feel about the relationship between Constance and Addy on American Horror Story. I won't say this relationship is as real—it has its moments, but it's too over-the-top to be taken so seriously—but it's very heavy, and at times very painful, in a way that the show around it isn't prepared to nurture responsibly. Addy's storyline this week is a good example of that: after flirting a little with her mother's current boy-toy, Addy decides that what she wants to be for Halloween is "a pretty girl." She goes first to Violet (Taissa Farmiga) to get some makeup, but Constance intervenes. "But you're not pretty," Constance screams at her, cruelly. Addy knows she's not pretty—she's spent enough time locked in the Closet of Infinite Mirrors, after all—but it's Halloween, and she gets to disguise herself as whatever she wants to be, and she wants to pretend to be pretty. Constance's need to punish her daughter for being what she is, and to deny her even an illusion of beauty or happiness, is horrifying on a level that American Horror Story really isn't prepared to deal with. 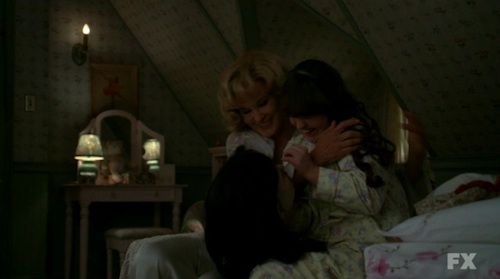 For reasons that aren't completely clear, Constance relents, and offers a new solution: she gives Addy a "pretty girl" mask. This scene, too, is disturbing—the rubber mask covers Addy's entire head, and completely depersonalizes her. (It makes her look, in fact, rather like one of those creepy Real Doll sex toys.) But this scene is also is the most tender we've ever seen between the two of them, with them cuddling and laughing, and with Constance being kind to Addy for the first time. (Not too kind, of course. Wondering if she has anything to fit Addy to complete the outfit, she mutters, "Maybe one of my old maternity dresses…")

But here's why this is too big and painful a subject for this silly show to be tackling: because it's all in the service of Falchuk and Murphy's insane plot machinations and emotional manipulations.

The last fifteen minutes of the episode really kick up the crazy, escalating to a wonderfully frenetic crescendo to take us into next week's Part 2. Moira is pulling the plug on her mother, Rubberman is in the house with Violet, Burned Larry is beating on the door, and then Ben and Vivien come home to find Violet missing and Haydn's ghost on the porch. Great. 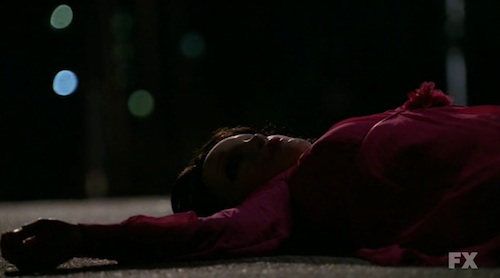 But here's the real problem, and a reminder for me that I shouldn't even think about getting genuinely invested in any of these characters. While all this has been happening, Addy has gone over to show Violet her "pretty girl" outfit, and has run into some real pretty girls. They are cruel to her, of course, but she tries to follow them—she thinks, in her outfit, she belongs with them—and is immediately hit by a speeding car. Constance, arriving on the scene, tries to move Addy back onto the Murder House property before she dies—because, apparently, everyone who dies on the property comes back, whether they want to or not—but it appears Addy is already dead.

I don't believe for a moment Addy is gone forever. (This has to be the only show in Hollywood where actors hope their characters get killed off, because it guarantees job security.) But it was sobering to realize that Addy's entire, painful storyline was designed only to make sure we'd care enough about her to be shocked when she got bounced off a Buick.  It's a reminder that, though Falchuk and Murphy may be good at occasionally generating real emotional moments, it's only in the service of their insane and heartless narrative needs. Such crass manipulation reminds me that American Horror Story is just one sensationalistic story blender, designed to chop up characters and deliver meaningless moments of shock and gore. The show doesn't really care about these characters, it just want us to care.

Silly me, I almost fell for it: I thought for a moment that these hacks were treating us to something mature and heartfelt, but it turned out to be just a trick after all.