I grow more and more concerned that Torchwood is always going to be a series at war with itself, pulled apart by two intrinsic but incompatible drives. Last week I said that the original concept—Doctor Who for adults—was inherently flawed: in the first place, Doctor Who already works just fine for adults, thank you very much; in the second place, campy sci-fi action heroics do not work well with the sort of dark, serious themes that Torchwood aspires to attempt. I'm a fan of Star Trek (for one example), and I'm also a fan of Alfonso Cuaron's Children of Men (for another), but I doubt I'd be a fan of some awkwardly spliced hybrid of the two.

Yet Torchwood too often feels like exactly that sort of ill-conceived mish-mash, and it's frustrating. In this week's episode, "Rendition," written by Doris Egan, the jagged seam where the two different sides of the franchise are knitted together was all too visible. Put simply, there are two entirely different shows happening simultaneously, and one of them is far more interesting than the other.

In the first show—and, to me, the weaker one—Jack and Gwen are on a plane to America, having been "renditioned" by CIA agent Rex Matheson, when fellow CIA agent Lyn (Dichen Lachman) attempts to poison Jack. (She's acting on mysterious orders from a superior, Mr. Friedkin, played with surprising restraint by Wayne "Newman" Knight.) Nothing about this plot-line particularly works: not the radical personality shifts of Rex (who goes from power-hungry asshole to trusted ally in the blink of an eye); not the ridiculous, impossible-to-believe attempt to save Jack's life by MacGyvering an antidote out of laptop batteries and engine lubricant; and certainly not how Agent Lyn—after she gets her neck snapped—comes lumbering after the heroes like she just staggered backwards out of Death Becomes Her.

If Torchwood: Miracle Day were only this sort of campy, totally implausible show, it might work better. (I myself wouldn't watch it, but I'm sure someone would.) However, existing side-by-side, in uneasy alliance with this nonsense, is a much more interesting drama. While Gwen and Jack and Agent Dickwad are acting out their preposterous episode of Doctor Who, M.D., a far more mature and thought-provoking drama is taking place on the ground.

Child rapist and murderer Oswald Danes (a wonderfully creepy Bill Pullman) has been released on a technicality, and he's already grasped what the "miracle" will mean for him as the most hated, least employable man on Earth. "There's going to be a mob outside my door for the rest of my life," he says. "And life is now a very long time." Danes takes the first step in rehabilitating his image, breaking down—or pretending to—during an interview with a smarmy, moralistic pundit. (Afterwards, we're told that Danes is "trending on Twitter, and the hashtag says '#forgive.'") It's hard to predict what long game Danes is playing, and it's hard to tell exactly what Pullman is playing (with his twitchy mannerisms and lurching speech patterns), but both the storyline and the performance are intriguing enough to make me want to see more. 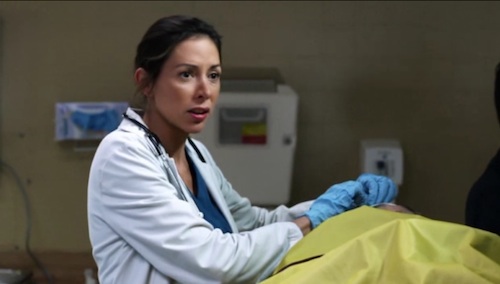 Equally intriguing is the continued exploration of the real-life effects of the "miracle," which we see through the eyes of Dr. Vera Juarez (Arlene Tur). Dr. Juarez is the one who realizes that, in a world where people are still injured but no one is going to die, standard emergency room triage procedures are all wrong. ("Even the worst injured aren't going to die," she explains to her staff. "We're desperate for beds, so we treat the minor injuries first.") It's also Juarez who realizes that a world full of mortally wounded (but undying) people means that pain medication is the highest priority, and that millions of terminally sick (but undying) bodies become incubators for super, antibiotic resistant viruses.

All of this is implausible as well, of course—not least of all Juarez's sudden rise from an E.R. doctor to the nation's leading expert—but it's plausibly implausible: it's good science fiction, thinking a high-concept scenario through to some of its logical conclusions. That's the same kind of intelligent speculation that the previous Torchwood series Children of Earth provided, and it's all too rare in this kind of fiction. Unfortunately, this very smart writing clashes terribly with the sillier, wildly stupid antics that seem to surround Captain Jack and Gwen.

Which perhaps brings us to the heart of the problem. Torchwood creator Russell T Davies has some big ideas he wants to explore, and he's good at exploring them, but so far it seems like he's trying to do it through the wrong vehicle. Children of Earth succeeded, in part, because it minimized the campier, more action-oriented aspects of the show's premise. It was a good science fiction story that just happened to include the Torchwood characters: those characters weren't essential to its plot, and in fact what they were doing was always less interesting than what the non-franchise characters (like government bureaucrat Peter Capaldi) were up to. The same is true, so far, in Miracle Day, and I can't help but think this might be far better as an unrelated mini-series free from the B-movie parameters of Captain Jack Harkness and crew.

In short—though I'm still willing to see it through—I'm starting to worry that Torchwood: Miracle Day might have been far better without the Torchwood.