Spoiler Alert: Contains mild spoilers for this episode, and for the previous series, Torchwood: Children of Earth.

For American viewers who may be unfamiliar with the brand, Torchwood began life in 2006 as a BBC sci-fi series created by Russell T Davies (the man who brought back Doctor Who in 2005). It starred John Barrowman as Captain Jack Harkness (a character who also began on Who), a charming, omnisexual, accidentally-immortal adventurer now leading a government-sponsored team to defend Great Britain from extraterrestrial threats.
The first two seasons of Torchwood were—to put it kindly—uneven. The show was conceived as a Doctor Who spin-off for "adults," and visibly floundered trying to find a way to realize that inherently flawed vision. For most of the first two series, Torchwood seemed to draw exclusively on the worst of both worlds: childish plots and ludicrous storytelling were awkwardly married to sleazy sex and shock-value violence. Constantly struggling to find its voice, Torchwood suffered from drastic changes in tone and direction throughout its first two seasons, veering wildly between the horrifically dark, the ridiculously campy, and the embarrassingly smutty, while it tried—and mostly failed—to find something that would work.

Torchwood didn't find its groove until the third season, when it gave up on the 12-episode "monster-of-the-week" format for a single, long-form story: the five-part mini-series Children of Earth. Running over five consecutive nights in July 2009, Children of Earth elicited an almost universal gasp of surprise from the critics and fans alike: Holy crap: Torchwood can actually be good.

Children of Earth was better than good: to me, it was one of the best science fiction stories of the decade. The series dealt with a big idea intelligently: if it is justifiable to sacrifice one life to save many, then how many innocents can be sacrificed before the math becomes unacceptable? In the series, an alien race—one too powerful to be fought—delivers a non-negotiable demand to the people of Earth: they want 10 percent of the Earth's children, delivered willingly by every country on the planet, or they're going to destroy the entire human race. (It's a lot like Stephen King's Storm of the Century, writ global.)

With Children of Earth, Torchwood eschewed ray guns and robots for a serious, relatively realistic examination of how society—and particularly how our governments—would respond to such an impossible choice. The series is full of creepy moments—including the reveal of why the aliens want the children—but the most chilling scene is all too human, and all too believable: bureaucrats, sitting around a table, calmly deciding which children are expendable. "On the one hand you've got the good schools…the pupils who will go on to staff our hospitals, our offices, our factories…" one official argues. "Set against that, you've got the failing schools, full of the less able, the less socially useful, those destined to spend a lifetime on benefits…Should we treat them equally?" Though weakened by some clumsy plotting and too-easy contrivances—particularly in the last episode—Torchwood finally demonstrated that "adult" doesn't have to mean sleazy: it can actually mean mature. Children of Earth felt like a smart, realistic BBC drama that just happened to frame its themes in sci-fi elements. 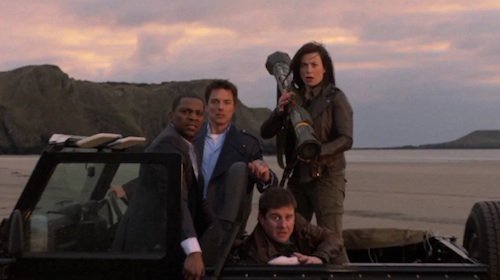 Now we have the next reinvention of Torchwood, the 10-part series Miracle Day, a joint-effort between the American cable network Starz (where it premiered July 8th) and the BBC, with producer and head-writer Russell T Davies still at the helm. Miracle Day, like Children of Earth, has a big, global concept at its center: what if, one day, everyone on Earth simply stopped dying? People still get injured, still grow old, still get sick—but they don't die. Death simply takes a vacation—for reasons that have yet to be explained—and a few characters realize that what seems like a "miracle" could become a global crisis in a matter of weeks.

In the opening scene, convicted pedophile and murderer Oswald Danes (Bill Pullman) is being executed by lethal injection—except it doesn't take. The chemicals are injected, his body goes into convulsions and arrest, but Danes doesn't die. This is just the first incident of the "miracle," and we immediately see another: CIA-agent Rex Matheson (Mekhi Phifer) is driving along, talking on the phone to fellow agent Esther Drummon (Alexa Havins), when a truck in front of him loses its cargo and a steel rod comes flying through his windshield and chest. Matheson is mortally wounded, but he doesn't die, and he wakes up in the hospital to discover that no one else on the planet is dying either.

Mattheson and Drummon suspect that this all has something to do with the word "Torchwood," which was emailed anonymously to intelligence agencies across the world right when the first miracle occurred—followed by a malware virus that erased all evidence of the Torchwood Institute from computers worldwide. Soon, the agents are tracking down the remaining members of Torchwood to figure out what the hell is going on. 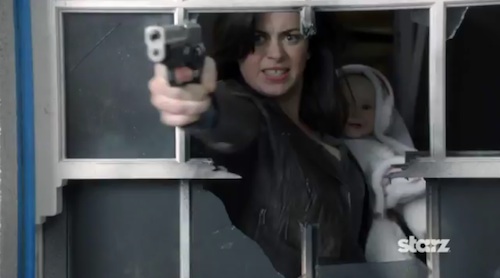 By the time Children of Earth premiered, the clumsy crucible of the franchise's first two seasons had already distilled the Torchwood team down to only a handful of its strongest characters, and Miracle Day opens with even fewer: the last members of the team standing are Captain Jack (who has disappeared), and ex-cop Gwen Cooper (Eve Myles), who is hiding out in an isolated house on the Welsh seashore with her everyman husband Rhys (Kai Owen).  (I won't reveal here what happened to all the other characters—and so far Miracle Day doesn't mention them—but I think the culling was a wise one, even if Davies is probably still getting death threats about one or two of their fates.)

Children of Earth began slowly, carefully establishing the human stakes and only gradually building up the global threat; strangely, though Miracle Day has twice as many episodes to work with, it seems more rushed. Russell T. Davies' strength as a writer is his characterization and dialogue, which makes him an unconventional but effective author of sci-fi stories: he can bring the human element to ground us, and to make us care about the characters who are being jerked around by the (sometimes preposterous) plotting. Here, however, Davies—perhaps trying to deliver a more "American" style of television—doesn't give us enough time to get to know any of these new or returning characters: so far it's all plot, all the time. 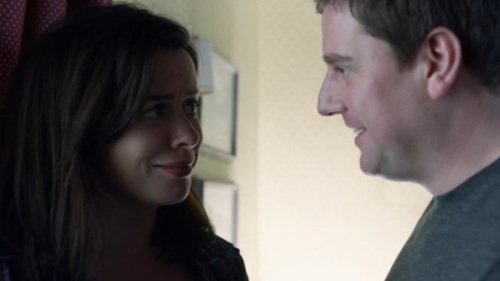 Myles and Owen bring an earthy, genuine humanity to Torchwood that balances out Barroman's larger-than-life, cheesy marquee hero. They are certainly one of the more realistic couples in sci-fi, but the new viewer will have to take my word for that: in this first episode, it's mostly machine guns and rocket launchers, and we barely get a chance to catch our breath with them. (I did like the scene where Gwen and Ryhs briefly consider that perhaps they shouldn't be trying to find out why people aren't dying, because it could mean that their newborn daughter will live forever; it's a nice, believable reaction from new parents, and sets up the kinds of conversations that should make Miracle Day worthwhile.)

It's too early to say whether the new characters will rise about their one-note outlines: so far the preposterously named Rex Matheson, for example, seems like a Brit's fevered imagining of an American CIA agent, all machismo and arrogance; Pullman's performance as Oswald Danes is promisingly creepy, but we'll need to see something that distinguishes that character from the countless Hannibal Lecter clones we've seen in other shows. 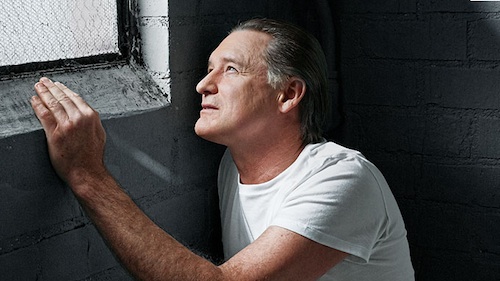 Absent the emotional highlights Davies is very capable of delivering, his weaknesses stick out even more. There's some very questionable plotting in Miracle Day so far, with characters ending up in the same place at the same time for no discernible reason, and CIA agents seemingly able to do whatever they want—with no supervision—depending on what the plot requires. (I'm also less than convinced that a convicted child-rapist and murderer would be released on parole just because his execution didn't take, but I'm willing to let that one slide.) Additionally, this first episode unfortunately features some of Davies' narrative crutches that have almost become self-parodying trademarks: there are so many newsreel montages in "The New World" that director Bharat Nalluri has to cut them up and frame them absurdly with random, off-centered close-ups (which, for the record, doesn't make them more interesting, only more tiresome).
On the other hand, there's some absurd and very welcome humor in Miracle Day. I loved the gruesome scene where Jack and a team of doctors examine a suicide bomber who is blown apart but still won't die. "What if you detach the head?" Jack offers, helpfully. "I mean, would he stay alive…without his head?" (They give it a shot: it doesn't help.)

If I sound a little underwhelmed with Miracle Day, that's because I am, and because Children of Earth set the bar so high. I'm hoping that this first episode is suffering from pilot-syndrome, and has misguidedly provided what the network thinks it needs to offer in order to lure in new (particularly American) viewers: gunfights and helicopter chases and rocket launchers.  But I'm sticking with it: I'm looking forward to some additional cast members who are due to turn up—including Lauren Ambrose (Six Feet Under) and Dichen Lachman (Dollhouse)—and I'm trusting that Davies will find some time to do what he does best: explore large science fiction concepts through wonderfully human characters.

Miracle Day has an intriguing concept, which seems ripe for the kind of serious speculative fiction that Children of Earth delivered so well.  It's just a little too early to say if the execution will be as good here: unfortunately, in its fourth series, Torchwood once again feels like a show that's trying too hard to find its footing.