Perhaps the best that the subject of any biopic can wish for is a film that captures their unique spirit and style, in both form and function. In that sense, Rocketman—director Dexter Fletcher's exuberantly messy dramatization of the life of Elton John—is a fitting tribute, even if I do not mean that entirely as a compliment to John or to the film.

I do not know anyone who doesn't like Elton John—the man or his music—and I doubt there is anyone of my generation (growing up in the 70s and 80s) who did not absorb his discography so thoroughly that nearly every song still sounds like an old friend today. With lyrics by his lifelong friend and collaborator Bernie Taupin, Elton John's music was always just incredibly likeable: infectiously catchy, poetic but never challenging, sentimental but only occasionally schmaltzy. And his style was so insanely over-the-top that it soared past the gender-bending provocations of its glam-rock inspirations to become almost a parody of itself. It was excessive, but never really edgy, because we always sensed that Elton himself was in on the joke. Behind the absurdly flamboyant costumes, the extravagant stage antics, and the apparently hedonistic personal life, we could always see the sweet, balding, slightly nebbish man who was himself amused at what he was pretending to be, and who was always endeavoring—so aggressively, and so charmingly—to be liked.

Rocketman is a perfectly fitting homage to this wildly entertaining showman, a figure who has been beloved and iconic for nearly 50 years without ever really being taken seriously. The film is goofily endearing in its naked desire to please, emotionally honest on a very superficial level, and kitschy in such a grotesquely showy way that at times it achieves moments that feel, fleetingly, transcendent. Appropriate to its subject, it is a crowd-pleasing and shallowly moving entertainment, and only after the music fades and the glow wears off do you realize that it hasn't actually said anything important.

The first thing to be aware of—whether you take it as a recommendation or a warning—is that Rocketman is not really a bio-pic: It is a jukebox musical fantasy. In the manner of stage shows about musicians like Jersey Boys (Frankie Valli), Beautiful (Carole King), and Movin' Out (Billy Joel), Rocketman repurposes Elton John's catalog to tell (without any tedious adherence to historical accuracy) the story of his life. From a bravura opening sequence in which John (Taron Egerton) strolls boldly into a addiction-recovery group wearing a winged and feathered devil costume, we move—with the liquid, associative freedom of memory—back to his beginning as little Reginald Dwight in 1950s England, through his rise as a megastar in the 70s and 80s, and ending with his crash into, and emergence from, substance abuse rehabilitation in 1990.

All the beats of Elton John's actual story are painfully familiar from a hundred other rags-to-riches-to-rehab tales, and Rocketman never quite convinces us that the specific (and already well-documented) version of this story that John lived is particularly interesting or novel, let alone that it demanded to be told. There are no revelations here, and even less introspection and insight. Even in its exploration of the "darker" aspects of John's life—his coldly disapproving parents, his fallings out with various friends and lovers, his excessive abuse of drugs and alcohol—Rocketman has the slightly harmless air of a subject-sanctioned biography. It all feels surface-level and sanitized, as if presenting only the sins that Elton John has already owned, and made public, and forgiven himself for long ago.

And the narrow focus of Rocketman's narrative does neither the film nor Elton John's life any favors. Rocketman establishes this as a story about the search for identity and the longing for true love, and then relegates the fulfillment of these quests to a series of title cards at the end of the movie. Personally, I would find the later stage of John's life and career far more interesting than the well-worn tracks of his early fame and drug abuse. Tell me about his meeting the love of his life, David Furnish, just a few years after Rocketman ends. Tell me about his launching a foundation for HIV/AIDS awareness and prevention. Perhaps it is not as dramatic as overdoses and orgies, but tell me how the feather-boaed, gender-bending gay pop star ends up, thirty years later, performing in Westminster Abbey and being knighted by the queen. That's an interesting untold story that might get at who the man actually is, and not just who he used to be.

So neither the subject's life story nor the film's insights into it justify the existence of Rocketman. Instead, the film's charms—and those charms are considerable—come from the exuberant contributions of two men: star Taron Egerton, and director Dexter Fletcher. 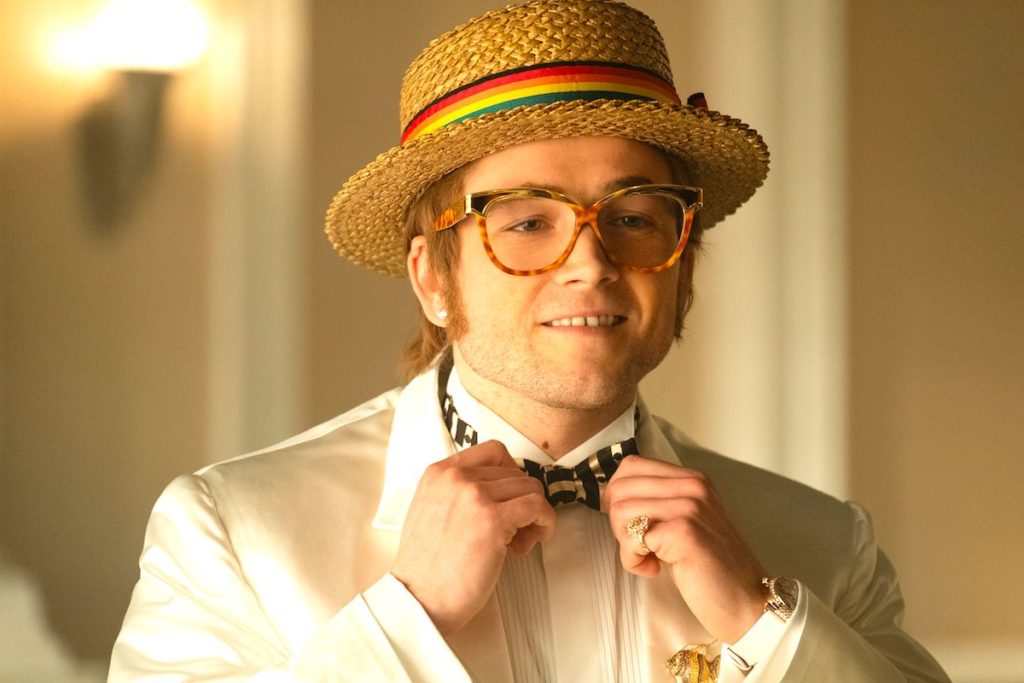 The film benefits from a strong supporting cast (including Jamie Bell as Taupin; Richard Madden as Elton's slightly sinister manager and lover John Reid; and a funny turn from Stephen Graham as gruff record producer Dick James). But it hinges on the performance of Egerton, who is in almost every scene and competently performs all of the songs himself. Egerton is not the most powerful singer (neither was John), and his dancing leaves even more to be desired, but he perfectly captures the nervous inauthenticity of the "Elton John" persona. "You gotta kill the person you were born to be, to become the person you want to be," a Motown artist (Jason Pennycooke) tells him, early in his career. Egerton plays the character as someone always trying to do that, but never quite comfortable with the person he is becoming: It is a cleverly performative performance, aware of its own construction, existing on the uncertain surface of a shaky foundation.

And director Fletcher—improving considerably on the lifeless, neutered biopic he was able to salvage from Bryan Singer's Bohemian Rhapsody—injects far more life and emotion into the proceedings than the material merits. Like most jukebox musicals, the talkative scenes are just dull placeholders between the musical numbers, and it's in the playful staging of these scenes that Rocketman really shines. At times Fletcher goes for the sort of psychedelic visual beauty of Julie Taymor's Across the Universe—with less imagination, and only mixed success—but his best trick is one so obvious as to be rather brilliant: As if he were literally adapting a Broadway show, he transfers the dissolving reality of stage blocking to film. On stage, we accept easily that a character can dance from one scene and setting directly into another on the bridge of a song, and Fletcher achieves the same effect here with seamless and dazzling dexterity.

For example, one number, "Rocket Man," begins with John overdosing at a party and falling into a pool: He and his 9-year-old self serenade each other at the bottom of the pool for a while, then he is rescued by synchronized swimmers, and taken in an ambulance to get his stomach pumped in a hospital. But somewhere in here, almost without our noticing, the nurses and orderlies saving John's life have become the backstage staff dressing him in sequins and pushing him onstage for a show at Dodger Stadium, where he strolls joyously out and hits a baseball into the crowd. It's in these moments that Rocketman transcends the shallow limitations of its biopic story and truly takes flight, capturing not just the facts of Elton John's life but the goofy sincerity of his music and the spiraling, drug-fueled frenzy of his fame.

There are enough of these moments strung together to make Rocketman well worth seeing, even if it's an ultimately shallow form of flashy extravaganza, and not any kind of genuine exploration. Like the man's music, it falls short of being serious art, but manages to be wildly entertaining, occasionally moving, and thoroughly, determinedly likable.